The International Whaling Commission is lurching from crisis to stasis, unable to impose a complete ban on whaling, yet equally unwilling to allow a formal resumption. So the IWC meets every year and watches ever more whaling ships depart from Iceland, Japan, and Norway in contravention of the spirit — and sometimes the letter — of its 23-year-old whaling moratorium.

At one level, there is a crisis of rhetoric and perception. Japan’s annual hunt, sanctioned under a loophole allowing whaling in the interests of scientific research, is clearly bogus. But would-be whalers say that some proponents of a true moratorium — including former great whaling nations like the U.S. and Britain — are equally guilty of pretend science: They deny that whale populations have recovered enough during the moratorium for whaling to resume, when in fact they oppose resumption of whaling under any circumstances.

But behind this rancid politics, there is a real unanswered scientific question: Have some whale populations, such as Atlantic humpbacks, rebounded sufficiently to allow “sustainable” harvesting? Or have numbers been so decimated by centuries of past hunting that any resumption would be dangerous both for whale populations themselves, and for wider marine ecosystems?

One of the IWC’s main management objectives is to prohibit all catches where a particular population is at less than 54 percent of its original population level — sometimes referred to as the ocean’s “carrying capacity.” Whalers say many stocks have now risen above this benchmark. But have they? How many whales once swam the world’s seas?

At a recent meeting in Vancouver, scientists engaged in the decade-long Census of Marine Life agreed that, in the words of Irish delegate Poul Holm, “human pressure on marine life was much earlier, much larger and much more significant than previously thought.” That conclusion, they said, applied especially to marine mammals, including whales.

This is a bombshell for marine biologists. Their conventional view, held at the IWC and elsewhere, is that whale numbers were largely unchanged 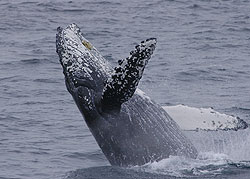 prior to the arrival of industrial whaling, generally defined as the advent of explosive harpoons in the mid-19th century and — at the start of the 20th century — factory ships with ramps that could load large numbers of slaughtered whales for processing. But this, it increasingly appears, is nonsense. Seventeenth and 18th century whalers — in the heyday of chasing whales for oil to make candles, light street lamps, and lubricate machinery — wrecked most of the world’s whale stocks long before the arrival of industrial whaling.

It seems that old sailors’ chronicles of oceans filled to the horizon with whales were not hyperbolic fantasies. They were often literal truth.

Why do the census historians conclude this? First, because the sheer volume of historical evidence makes it ever harder to disbelieve. And second, because new population modeling, some of it based on DNA evidence, provides strong corroboration for the chroniclers.

The History of Marine Animal Populations (HMAP) project, part of the Census of Marine Life, has so far collected records on 70,000 whale encounters that build up a picture of past super-abundance, says Andy Rosenberg of the University of New Hampshire. Meanwhile, the genetic variation found in a handful of whale populations so far analyzed suggests that those that remain came from much larger populations than previous supposed. The analysis is based on the fact that, with succeeding generations, DNA is altered through subtle mutations: The larger the original population, the greater the genetic “drift” evident in the current population.

For instance, based on its own records, the IWC had concluded that the number of humpback whales swimming the North Atlantic before whalers began to reduce their numbers was around 20,000. With the current population estimated at 10,000, the humpback population could soon be considered sufficiently large to allow the resumption of whaling. But when Stanford University’s Stephen Palumbi and Joe Roman analyzed the population’s DNA in 2003, they concluded that the pre-exploitation figure was 12 times greater, with a population once numbering 240,000.

This suggested that the North Atlantic’s original humpback whale population was more than 20 times larger than the present population, and any claims that the population has recovered sufficiently to allow a resumption of whaling are well wide of the mark. Palumbi’s findings also suggest that the global population of humpbacks may once have been around 1.5 million, rather than the 100,000 estimated by the IWC.

Among the best documented stories of whale extermination is that of Arctic bowheads. England’s most famous whaler, William Scoresby, was 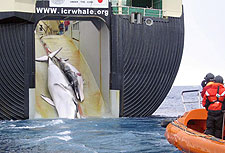 The Japanese whaling ship, Yushin Maru 2, hauled two dead minke whales on board for processing in Antarctic waters in 2008.

one of hundreds of Dutch and English whaling captains who headed into the iceberg-infested waters around Greenland in the late 18th century to catch bowhead whales. They only had wooden vessels powered by wind and sail, and hand-held harpoons. But, guided by Scoresby — a brilliant sailor who invented the crow’s nest as a lookout for ice and whales — they sailed audaciously among the ice floes, where the whales congregated each spring, and brought back ever-larger hauls of blubber, to be boiled up on the dockside at ports like Scoresby’s home town of Whitby.

According to Robert Allen of the University of British Columbia in Vancouver, who modeled rates of harvesting and the reproductive rates of the species, eastern Arctic bowheads numbered almost a million animals when the Greenland hunt began. But within a few decades, the bowheads were virtually all gone. Whitby whalers gave up going north in the 1830s.

Today, almost 200 years on, the population of bowheads west of Greenland is still only around 1,200, and that east of Greenland, once the biggest whaling ground in the world, has simply disappeared altogether.

Whaling before the explosive harpoon and the factory ship may have been technically primitive, but it was a huge industry, with thousands of ships setting sail. The New England port of New Bedford, Massachusetts, was once known as the “the city that lit the world” because of its production of lamp oil from whale blubber.

One whale population after another was decimated, before the fleets moved on through the oceans, heading finally for southern waters. HMAP researchers estimate that in the 18th century, the waters off New Zealand were home to around 27,000 southern right whales. But by 1925, they had been reduced to 25 reproducing females.

“The systematic destruction of the great whales was a stupendous act of modern ecological folly…” Jeremy Jackson of Scripps Institution of Oceanography in San Diego writes in a recent paper in Whales, Whaling and Ocean Ecosystems. “(T)he ecological consequences of the removal of so many behemoths must have been profound.”

He argues that the new findings on the past profusion of whales show our conventional view of marine food chains is upside down. Modern oceans are dominated by small and lowly creatures. They comprise most of the biomass, with larger species further up the food chain comprising ever less biomass.

But, says Jackson, this “trophic pyramid” may be an artifact of human hunting over the centuries rather than the natural state. In the natural state, he argues, the trophic pyramid was probably the other way around, with biomass dominated by megafauna. Millions upon millions of whales were eating out the oceans as fast as they could go.

Most marine biologists, Jackson says, continue to dismiss this idea out of 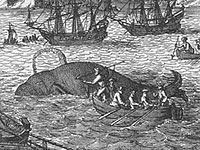 A wood carving from the 18th century shows Dutchmen hunting bowhead whales in the Arctic.

hand, despite “the most careful and detailed historical descriptions [which are] are commonly dismissed as untestable anecdotes.” They do this, he says, because anecdotes of past huge whale numbers — though numerous — lack scientific rigor. And some argue that the DNA evidence relies on the assumption that distinct populations of whales did not interbreed in the past. Jackson calls this “unbridled anti-historical determinism that flies in the face of everything we have learned about”¦ ecosystems.”

Jackson offers a startling new picture of life on Earth, a world in which giants ruled, and ruled in huge numbers. And if Jackson is right, then even the most “recovered” of today’s whale populations are only a tiny fraction of their former numbers.

That is one cause for thinking very hard before allowing any resumption of whaling. Another is that the world is only now learning the true scale of the abuse of science and wholesale flouting on IWC hunting quotas that has marked most of the six decades since the commissions was established in 1946.

We may have known how boats paid for by Unilever hunted the oceans with such vigor in the 1930s that an entire fleet was impounded by concerned Norwegians authorities in 1936 — one of the incidents that led to the commission’s formation. We may know how Greek shipping magnate Aristotle Onassis made a whaling fortune in the 1950s and reportedly covered the bar stools in his favourite yacht with the downy skin from the scrotums of sperm whales.

But it is only in the past two years that the Marine Fisheries Review has published in English the memoirs of Russian whaling scientists, supposedly monitoring fleets in the 1950s and 1960s to ensure they complied with IWC rules. Former inspector Alfred Berzin described how the most notorious flouter of IWC law, Alexei Solyanik, killed 25,000 humpback whales off Antarctica in two seasons from 1959 to 1961, almost all outside the five-day legal hunting season.

At the start, said Berzin, “there were so many whales that the helicopter pilots joked they could make an emergency landing on the backs of humpbacks that were close to each other.” By the end, they were mostly gone, and Solyanik moved on to take other species like sperm and minke whales. Meanwhile, Australian biologists reported some catastrophic loss of the humpback population, but it was decades before the truth emerged that Russian whalers had decimated the population.

Such flagrant breaches of whaling law might not be possible today. The story suggests, however, that when greed is involved on the high seas, the chances of tightly controlling the size of catches is small. But the bigger story may be that whenever a harpoon enters a beleaguered whale, we are not harvesting a sustainable resource, we are messing with the remnant giants of deeply traumatized ecosystems about which we know staggeringly little.