Until her semi-nomadic family moved into the tiny Inuit community of Baker Lake in the 1950s, Joan Scottie never knew there was a wider world beyond her own on the tundra of the Nunavut Territory in the Canadian Arctic. She didn’t see the inside of a school until she was a teenager and didn’t venture south until she was an adult.

But that all changed in 1978, when a Soviet satellite carrying 100 pounds of enriched uranium for an onboard nuclear reactor crashed into the middle of the wilderness she knew so well, resulting in a military search that recovered some of the radioactive debris. Everything that Scottie learned about uranium after that convinced her she wanted nothing to do with a mineral that had the potential to cause such serious health problems or be used for military purposes.

So when a German mining company showed up at Baker Lake ten years later with a plan to extract uranium from an area that included a key caribou calving ground, Scottie and her Inuit neighbors weighed the

The Canadian government sees Arctic mining as a cornerstone of the country’s economic future.

environmental implications against the economic advantages and voted emphatically to say “No.” The German company eventually dropped its plans.

Now, however, the Inuit grandmother of two finds herself once again on the front lines of a grassroots movement trying to block several new companies from mining uranium from the same lodes near Baker Lake. And this time the playing field has changed.

The Canadian government has made it clear that Arctic mining will be one of the cornerstones of the country’s economic future. It is encouraging mining companies to exploit the deposits of gold, silver, zinc, diamonds, uranium and other minerals and metals found in abundance in the vast areas of the enormous Nunavut Territory, as well as the Yukon and Northwest Territories.

In spite of the global recession of 2008 and the March 2011 meltdown at Japan’s Fukushima Nuclear Power Plant, which caused some countries to reconsider nuclear power, uranium exploration is proceeding at a record pace in this part of the world. In Scottie’s backyard, the French mining giant, Areva — partnering with JCU Exploration of Canada and the DAEWOO Corporation of Korea — is actively exploring a major uranium lode at Kiggavik, the site of the former planned German mine, 50 miles west of Baker Lake. Other companies also are considering building mines in the surrounding tundra. In the territory of Nunavut alone, more than $322 million was spent on exploration for uranium and various metals and diamonds in 2011, up from $189 million in 2009. 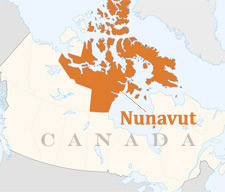 Wikipedia/Yale Environment 360
Nunavut Territory, located in northern Canada, where several companies are looking to mine uranium.
The Inuit are split on the wisdom of large-scale uranium mining in their territory, with some saying their communities desperately need the economic development, while others are concerned about the environmental fallout from the industry. With a population of just 30,000 mostly Inuit people living in a territory the size of Western Europe, Nunavut — which contains a sizeable part of mainland Canada as well as most of the country’s Arctic Archipelago, extending nearly to the North Pole — remains the largest undisturbed wilderness in the northern hemisphere. Though some mining roads exist, not a single road connects its 25 communities. As a result, some of the biggest caribou herds in the world — ranging in size from 65,000 to more than 400,000 — migrate freely.

Scottie, other Inuit, environmental groups, some scientists, and the country’s environmental agency, Environment Canada, are concerned that a mining boom in parts of Nunavut will interfere with the calving and migration of caribou, which already are experiencing stress from a warming Arctic climate. These groups also worry about contamination from uranium mining, especially given the history in northern Canada of mining companies abandoning their mines and performing little, if any, environmental cleanup.

“What happened in the past is a concern,” says Ramsey Hart, who works for Mining Watch, an environmental watchdog based in Ottawa. “With uranium especially, we’ve seen prices rise and fall dramatically in relatively short periods of time. What happens to these open pit mines and roads and tailings if the mines are no longer economically viable? And what happens to caribou? Their numbers in the Arctic are already down dramatically.”

Last year, seven companies searching for uranium held 554 active leases to explore on the Beverly caribou herd’s traditional calving ground. Only a fraction of these projects will be move forward. But experts say that by 2017, eight mines may begin production in the Kitikmeot region, which encompasses the northwest portion of mainland Nunavut.

Mining companies vow to take steps to minimize disturbance of Nunavut’s caribou herds and say that the development of a uranium mining industry will bring jobs and prosperity to this undeveloped region. Areva — which

The rapidly growing Inuit population in Nunavut is in desperate need of jobs.

for its Kiggavik project is proposing one underground mine and four open-pit mines, as well as roads and a port to ship out concentrated uranium — says the project would create at least 400 jobs and would have an annual payroll of $200 million for nearly two decades. Areva spokesman Barry McCallum told The Canadian Press that the company’s mill to produce uranium concentrate could also attract other uranium mining companies to the region.

Tom Hoefer, the executive director of an industry group, the Chamber of Mines, has suggested that all this new interest in Nunavut will require the building of 400 miles of new roads and will lead to the revival of previously shelved mining projects. “Surely this presents a tremendous opportunity for local arrangements to construct, to maintain and to operate this infrastructure,” Hoefer said at a trade show in Nunavut in September.

Some Inuit enthusiastically support mining, especially now that the settlement of aboriginal land claims gives the Inuit the mineral rights to 10 percent of the 350,000 square kilometers of land they were given title to. The rapidly growing population is in desperate need of jobs, and the Canadian government, the Nunavut government, and the Inuit-owned corporations set up to manage the land-claims assets believe mining could address that need, as well as bring in revenues to native corporations. The Nunavut Impact Review Board is now studying the Kiggavik project, which is the farthest advanced of any of the proposed uranium mines in Nunavut.

The history of mining in Nunavut has been a short and disjointed one, thanks largely to high costs of fuel and transportation and the fact that there are scarcely any roads in the regions. There is just one mine — the Meadowbank gold mine near Baker Lake — currently operating in Nunavut territory.

Canada is the world’s second-largest producer of uranium, with three of the top ten mines in the world located in northern Saskatchewan near the Nunavut border. And uranium isn’t the only hot commodity in the Arctic; soaring gold prices are leading to a so-called “new gold rush” in the Yukon, where activity in 2011 was unprecedented in scope.

The scramble for uranium is a more complex story. No one knows where the uranium will go when and if it’s extracted. The industry is notoriously guarded about releasing such information. But most experts believe that

What happens if they get their roads, their open-pit mines, their shipping ports?’ asks one Inuit elder.

China and several European countries that rely heavily on nuclear power — most notably France, home of Areva — will eventually drive up prices, which are now near five-year lows.

Looming over the current debate about mining in the Arctic is the legacy of past mineral extraction. The Canadian government is currently on the hook for an estimated $4.5 billion to clean up dozens of uranium, gold, sliver, and zinc mines abandoned in the northern territories, including two in Nunavut.

One of those mines, Eldorado Mining and Refining, was a government-run corporation that dumped some of the more than 750,000 tons of radioactive tailings from uranium mining into the pristine waters of Great Bear Lake. Located in the Northwest Territories just west of the Nunavut border, Great Bear is the third-largest lake in North America and the seventh largest in the world. Tens of millions of dollars have been spent cleaning up that site and on compensating aboriginal people whose health may have been affected by the contamination.

While the government of Canada has introduced legislation to ensure that at least some of the costs associated with reclamation are accounted for in future developments, critics believe there are still serious risks.

For Inuit like Scottie and the Baker Lake Hunters and Trappers Organization, the plight of caribou — which have been central to the Inuit’s subsistence culture — lies at the heart of the issue. Caribou numbers were down dramatically in some places in the Arctic in recent years thanks largely to cyclical fluctuations that occur naturally. But a rapidly warming climate also appears to be taking a toll. Concerned about several issues — including mining’s impact on caribou — Environment Canada wrote to the Nunavut Impact Review Board about the Kiggavik project: “Environment Canada is of the opinion that there is the potential for the project to cause significant adverse environmental impacts.”

A Troubling Decline in the Caribou Herds of the Arctic

Across the Far North, populations of caribou — an indispensable source of food and clothing for indigenous people — are in steep decline, Ed Struzik writes. Scientists point to rising temperatures and a resource-development boom as the prime culprits.READ MORE
Scientists like Don Russell — a former Environment Canada researcher who now heads up CARMA, an international network that shares research data and information on caribou — said that new mining and energy development, coupled with regional climate change and more efficient hunting techniques used by the Inuit, may cause further caribou declines. That’s because almost everything scientists have learned over the past three decades suggests that these animals need space, especially when they’re calving.

In spite of the high stakes both for the economy and for the environment, neither the mainstream Canadian media, nor most environmental organizations, have paid much attention to an issue that promises to rewrite the future history of the Arctic.

“No one but us hunters and trappers are talking about what this all means to caribou and other Arctic animals,” says Scottie. “We already have one mine. Maybe another mine won’t hurt. But there are a lot of other companies up here who have big plans as well. What happens if they get their roads, their open mine pits, and their shipping ports. What happens then?”

Correction, January 31, 2012: Due to an editing error, the original version of this story incorrectly reported that more than $322 million was spent on uranium exploration in Nunavut Territory in 2011. That figure also includes exploration costs for gold, iron, diamonds, lead, zinc and copper.