Along Cuba’s Coast, The Last Best
Coral Reefs in the Caribbean Thrive 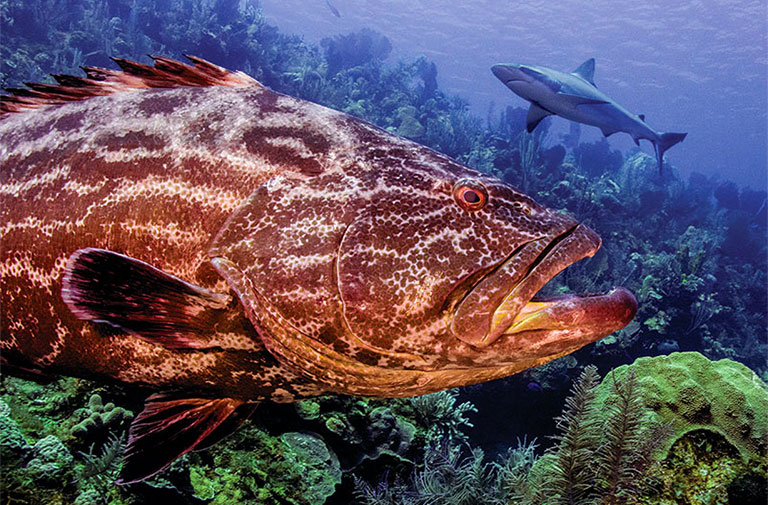 A giant grouper, with a shark in the background, cruises a section of coral reef in Cuba. View the photo essay. ROBERT WINTNER

The enduring image of Cuba is of a country locked in a time warp, with 1950s American sedans cruising the streets, colonial-era buildings in disrepair, and six decades of strict state control over the economy and a U.S. embargo keeping development at bay.

This frozen-in-amber quality also applies to many of the marine ecosystems surrounding the Caribbean’s largest island, with tremendous benefits for Cuba’s aquatic life. While coral reef cover has declined by 50 percent throughout the Caribbean in recent decades, Cuba has managed to retain some of the most pristine and biodiverse coral reef environments on earth. A lack of coastal development, limited tourism, relatively small amounts of runoff flowing into the sea, tight controls on commercial fishing, and the establishment of extensive marine protected areas have all combined to give Cuba the most remarkable coral reef environments in the Caribbean.

In a new book, Reef Libre, photographer and diver Robert Wintner — known as “Snorkel Bob” — has documented the beauty of Cuba’s coral reefs. Many of the photographs were taken in the crown jewel of Cuba’s marine reserve system — the 840-square mile Gardens of the Queen National Park, or Los Jardines de la Reina. Located 60 miles off Cuba’s southern coast, the park encompasses a 30-mile-long barrier reef ecosystem where an astonishing assemblage of underwater life — elkhorn coral, scores of species of tropical fish, 500-pound Goliath grouper, and large numbers of sharks — continues to thrive.

As Wintner notes, the key question now is how Cuba’s coral reef environments will fare as the country reestablishes diplomatic relations with the United States and faces an inevitable boom of tourism and coastal development. The government has vowed to protect 25 percent of the nation’s waters as marine reserves. But it remains to be seen whether Cuba can escape the rampant coastal development, overfishing, and other problems that have taken such a heavy toll on coral reefs elsewhere in the Caribbean.

ABOUT THE PHOTOGRAPHER
Robert Wintner is a diver, author, and founder of Snorkel Bob’s shops throughout Hawaii. His latest book, Reef Libre: An In-Depth Look at Cuban Exceptionalism & the Last, Best Reefs in the World, was published last month. Wintner is active in Hawaii’s conservation community and has led campaigns against the aquarium trade in Hawaii and around the world.