The planners of the border zone separating East and West Germany thought they had considered everything. They wanted to stop people from fleeing the communist East for a freer life in the West, and they wanted to leave nothing to chance. So along the 1,400-kilometer (870-mile) border that stretched from the Baltic Sea to Bavaria, they built one of the cruelest barriers ever created by man. It began 5 kilometers from the actual border with a first line of control, followed by runs for guard dogs. Then came fences with touch-sensitive alarms, sandy strips to detect footprints, guard towers, minefields, bunkers with automated guns, and — finally — the ultimate fence or wall, behind which lay the forbidden land of West Germany.

As it turns out, the planners of the East German border hadn’t quite anticipated everything. They didn’t envision that history would sweep them away. And they had no clue that what they were really creating in the long run was not a brutal enclosure but a highly valuable nature reserve. “There is no other area in Germany that has been largely undisturbed for such a long time,” says Dieter Leupold, a biologist with the German branch of Friends of the Earth. 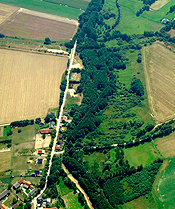 Photo courtesy of Klaus Leidorf
Conservationists and government biologists hope to make Germany’s “Green Belt” the backbone of a system of ecological corridors.

Now, more than two decades after the dismantling of the Berlin Wall and Germany’s East-West border zone, Friends of the Earth and other conservation groups, joined by the federal and state governments, are close to completing an amazing metamorphosis: They are turning the former “Death Strip” into one of the world’s most unusual nature preserves. Although it runs the length of a reunited Germany, it is only 30 to a few hundred meters wide. But despite its bizarre dimensions, this border green belt — where hundreds once perished trying to escape to the West — is uniquely valuable, according to Leupold and other scientists.

In most parts of Germany, East and West, intensive agriculture, highways, and cities put huge pressure on ecosystems and many species of plants and animals. But the border area was off limits to most humans for decades, and thus became a safe haven for rare wildlife and plants. “The European otter, which is endangered throughout Germany, really likes the ditches that were meant to stop vehicles from crossing,” Leupold said as we walked recently along the former border near the East German city of Salzwedel. “We have black storks, moor frogs, white-tailed eagles — basically you can meet the Red List of endangered species here.”

But the vision of conservationists and government biologists goes well beyond the ribbon of land that once divided the two Germanys. Conservationists and government officials are striving to make the Greenbelt the backbone of a German-wide system of ecological corridors. Since 1990, the Federal Agency for Nature Conservation has established more than 20 large protected areas connected to the old East-West border. Those protected areas might eventually become part of a much larger effort — proposed by The International Union for Conservation of Nature
(IUCN) — to create a continuous, pan-European nature reserve stretching from northern Finland to the Black Sea along the route of the former Iron Curtain.

Only a few weeks after East Germans broke through the Wall at Brandenburg Gate in Berlin in November 1989, and then through the inner-German border installations, environmentalists from Friends of the Earth in Bavaria dared to publish a petition for a “Green Belt” project. The border area “should be protected as the ecological backbone of Central Europe,” the petition, published on Dec. 9, 1989, says. This was a courageous step at the time, as the border was universally referred to as the “Death Strip” and loathed for very good reasons.

Leupold, now 49, is originally from Hamburg in what was West Germany. After the wall came down, he felt an urge to help East Germans protect their environment. So he applied for a job at the regional environmental office in the East German Altmark, an area halfway between Hamburg and Berlin. That’s where he first heard about efforts to create the border reserve, now located right in the middle of a unified Germany.

“Many people just wanted to get rid of it and move on,” Leupold says. Farmers started to cultivate the land after mines were removed, and cities and villages built numerous roads to reconnect the people.

That’s when the hard work started for people like Uwe Riecken, department head for habitat protection and landscape ecology at Germany’s Federal Agency for Nature Conservation in Bonn.

‘We wanted to prove that his is an area of value and that it can transcend the horrors of the past,’ said one official.

“We wanted to prove that this is an area of value and that it can transcend the horrors of the past,” says Riecken. In collaboration with Friends of the Earth, Riecken’s agency began a painstaking inventory of the ecosystems and species along the Green Belt. “We had teams of ornithologists, botanists, entomologists, people for many different taxa, walking for hundreds of kilometers along the former border and recording what they came across,” he recalls. Observations from local birders and plant aficionados were fed into the database as well. In the end, more than 1,000 species from Germany’s Red List of endangered species were identified.

Riecken’s agency also called for the creation of large formal reserves in as many areas as possible along the Green Belt, which would form the spine of a new German-wide system of ecological corridors. “From early on, we tried to protect the pearls along the bead chain,” he says.

Last year, planners at the Federal Agency for Conservation published a proposal for a nationwide system of ecological corridors branching off the Green Belt. One of these reserves, Harz National Park, encompasses 25,000 hectares (62,000 acres) in the heart of Germany. In the northern part of the country, Schaalsee Lake anchors an extraordinary 15,000-hectare landscape of moors, fens, forests, and meadowlands. The Green Belt ties together these diverse natural areas. “We can’t prove yet that individual animals actually migrate exactly along the Green Belt over very long distances, but it certainly connects populations of many different species and helps their survival,” Riecken says.

Photo courtesy of Christian Schwägerl
Dieter Leupold, a biologist from Friends of the Earth Germany, in the Green Belt area near Salzwedel.

On their field trips into the former border zone, researchers encountered an amazing mixture of habitats. Forests, heathlands, sand dunes, salt meadows, riparian areas, green meadows, shorelines — the border literally cut through Germany’s rich natural heritage. “Some forests had not been touched for 40 years,” says Riecken, “so there was dead wood laying around just like in a natural forest, but unlike in the rest of this very orderly country.”

In other areas, the ecological value of the Green Belt stems from the fact that open areas were created with the help of machines, but without any use of fertilizers. “In the intensively used landscape of Germany, sandy areas with low nutrient levels have become quite rare,” Riecken says. In these areas, the researchers recorded plant species like heather and cowslip, as well as a great diversity of butterflies and crickets that thrive only in these habitats.

With this wealth of data, the case for a formal Green Belt grew stronger. In 2002, the Green Belt initiative pulled off a major PR coup when Mikhail Gorbachev, the man who oversaw the demise of the Soviet Union, endorsed the idea. Gorbachev became the first person to buy a “Green Belt share,” effectively giving money to Friends of the Earth to purchase land.

Yet environmentalists knew that enormous challenges remained before they could finish their job. Parts of the area had already been privatized to compensate people for property expropriation by the East German government. More than 60 million euros — $85 million — would have been needed to buy the land, which was way beyond available budgets. Without the support of German states and the federal government, the project would be doomed.

‘There were fears that ecologists would turn this thing into a new border,’ said a scientist.

So in 2005, Riecken and others were greatly relieved when Angela Merkel became the first East German to lead the unified country and her coalition of conservatives and social democrats formally supported the Green Belt. Last year, Chancellor Merkel transferred all areas owned by the federal government to the states, which are in charge of conservation in Germany. “What separated us in the past now unites us as a Green Belt,” Merkel said. Today, politicians from all parties celebrate the Green Belt as a major conservation success.

Yet it was clear to the Green Belt strategists that just leaving the former border strip alone would not suffice. Some areas have to be managed to keep them open and sandy for specialized species. Even more important is making the Green Belt truly sustainable, which means spinning off income and opportunities for the people living alongside it, in an area beset by high unemployment and an exodus of the young.

Three areas were chosen as pilot projects to develop a mixture of ecotourism and sightseeing: One in the Thuringian Forest, one in the Harz Mountains, and one in the Altmark. “We turned the former road for patrols into a bike path,” says Leupold. Also, 60 explanatory signs along the path now tell the tragic story of separation and the more uplifting story of ecological regeneration.

“Hotels and restaurants love it — we already have people coming from afar to experience this very special mixture of nature and history,” Leupold says.

The area is ideal for birders. While we spoke, huge gaggles of grayleg geese circled in on a meadow. From the nearby alder forest came the haunting mating songs of Eurasian cranes. But ecotourism is only the start, according to Leupold. “We want farmers to be paid for ecosystem services, so we can cooperate instead of competing for land,” he says.

The biggest tasks ahead are turning as many sites as possible into formally designated protected areas and closing the 200 kilometers of gaps in the Green Belt. It’s a tough sell for many locals. “There were fears that ecologists would turn this thing into a new border, create exclusion zones and forbidden areas, not to serve communism, but environmentalism,” says Leupold. Those fears were unfounded, he adds, but need to be addressed.

The federal government and Friends of the Earth are collaborating in buying up as much of the remaining private land as possible to dedicate it to conservation. “But in some places, we just can’t move a road or push farmers’ interests to the side,” says Riecken. In those cases, the initiative is proposing bypass solutions. “We then try to create a corridor that does not exactly follow the historical border, as the animals that might use it don’t really care about this aspect,” he says.

As the Green Belt project moves ahead, Riecken and Leupold are happy that their work has helped turn a symbol of death into a symbol of life. “What we are celebrating with this project,” says Leupold, “is the spirit of unification.”