We set off before dawn with my guide, Elton Mendes, steering a battered pickup through the Amazon jungle. He reached a hand out of the window and tugged on a stick tied to the wipers, squeegeeing drizzle off the windshield.

After a short drive, he parked by a concrete slab in a clearing. An orange lattice of steel rose up from the block and disappeared into the canopy far above my head. It is called the Tall Tower, and with good reason: At 1,066 feet — three feet higher than the Eiffel Tower — it’s the tallest structure in South America. It’s also the centerpiece of a three-tower scientific complex — the Amazon Tall Tower Observatory, or ATTO — located 150 miles northeast of the Amazon River’s largest city, Manaus.

When fully outfitted, ATTO’s trio of towers will bristle with gas sniffers, particulate collectors, light sensors, and scores of other instruments that will continuously watch over the forest — and the air above it — for at least the next two to three decades. The Brazilian and German scientists overseeing research at ATTO say that the data collected by these instruments will provide an unprecedented portrait of the role that the Amazon jungle, the world’s largest rainforest, plays in the global carbon cycle — a key finding in an era of climate change. And by taking these measurements — including temperature, wind, greenhouse gases, ozone, radiation, visibility, tree canopy changes, soil temperatures, and soil gas fluxes — scientists will be able to track how global warming is affecting the Amazon, particularly its ability to absorb carbon.

Two shorter, 260-foot towers, located several hundred yards from the Tall Tower, have been measuring gases and other components of the atmosphere since 2010, as well as studying how the fine droplets, gases, and tiny particles released by forest vegetation, agricultural fires, and pollution from distant cities contribute to the formation of clouds and rainfall in the Amazon.

The Tall Tower itself has no instruments yet, as problems with elevators and other complications have delayed installation of gear. But it will soon be in operation, and I had been invited to scale the tower to gaze at the spectacular view and take a whiff of breezes that researchers will study from its pinnacle. Mendes, a maintenance worker, would guide me up the 1,500 steps of the slender orange-and-white structure, which rises above an expanse of pristine jungle.

The Amazon, a region nearly the size of the U.S., is by far the largest rainforest on earth. Biologists have warned for decades that its prodigious biodiversity was threatened by logging.

It’s important to understand how much CO2 is being absorbed by the Amazon and other tropical forests.

But more recently, climate scientists have become concerned that global warming may also pose a danger to the forest, possibly by shifting oceanic and atmospheric currents in ways that could lead to a pronounced drying of the Amazon. A study last year suggested that tree mortality in the vast rainforest, possibly related to changing weather patterns, is already reducing its ability to sequester carbon.

Scientists understand roughly how carbon flows through the Amazon forest, as the photosynthetic process takes CO2 from the atmosphere and turns it into vegetation. Leaves, wood, and other plant matter are then transferred into the soil through decomposition, and some of that carbon is released back into the air. But before scientists can forecast the fate of the Amazon, they need a more sophisticated grasp of how the forest interacts with the atmosphere.

One thing they’ll be looking at is what role the Amazon plays in the mystery of where all the carbon dioxide humans produce from burning fossil fuels is going. About half of that CO2 is soaked up, in roughly equal parts, by ocean water and terrestrial trees and plants. But Scott Denning, an atmospheric scientist at Colorado State University, says it’s important to understand how much CO2 is being absorbed in the Amazon and other tropical forests. If the Amazon does act as a net sink today, scientists want to know and for how long it will continue to do so.

Beginning in the late 1990s, researchers at the United Kingdom’s Met Office published a series of worrisome papers on the prospects for Amazonia in a warming world. Using computer models that link climate and vegetation, they found that by altering atmospheric circulation over the Atlantic Ocean, global warming could dry out much of the Amazon basin. They said that much of the forest could turn into savannah, putting at risk the region’s rich flora and fauna, and releasing vast quantities of carbon dioxide. Newer studies have cast doubt on this cataclysmic scenario, saying that while the Amazon may not continue to support its current lush vegetation, some form of forest would remain. 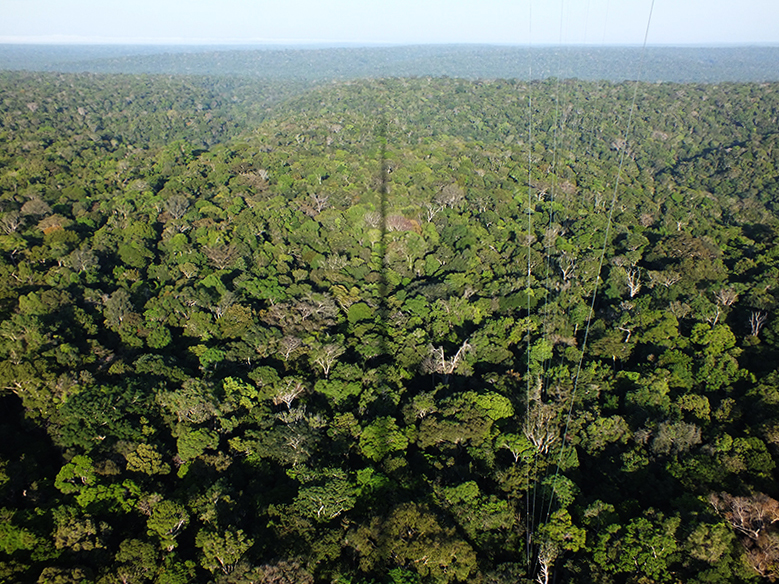 The canopy of the Amazon rainforest, with the shadow of the Tall Tower observatory. SUSANNA BENNER/MAX PLANCK INSTITUTE FOR CHEMISTRY

ATTO will play an important role in studying these questions. The complex was funded jointly by the Brazilian and German governments, each of which contributed half of the $9.5 million cost of building and running it for the next several years. Germany’s Max Planck Institute for Chemistry and several Brazilian research institutions, including the National Institute of Space Research and the National Institute for Amazonian Research, oversee the project.

Antonio Ocimar Manzi, a climate scientist at the space institute, is the lead Brazilian administrator of the ATTO project. The first time he stepped onto the Tall Tower’s top platform last year, he said he was overcome with emotion. “I saw the green ocean,” he said in a recent Skype call. “It was a dream of two decades.” He was perched atop the world’s tallest meteorological mast. It was meant to be 320 meters, or 1,050 feet, tall. But the builder had noticed that it was just shy of the height of the Eiffel Tower. At the builder’s suggestion, Manzi approved a new design — 325 meters tall — besting the Paris landmark by one meter.

Height matters, said Manzi. Instruments farther from the ground sample air that has been in contact with vegetation at greater distances, giving them a more comprehensive snapshot of regional forest conditions and the complex exchange of CO2 and other gases. Instruments mounted at the top of the tower will sense the photosynthetic activity of leaves over tens of square miles of canopy, an area many times greater than equipment on any other tower in the Amazon.

The Tall Tower’s summit is exposed to long-distance easterly winds that have crossed hundreds miles of jungle from Brazil’s Atlantic coast. These high-altitude winds pick up clues to the productivity of forest that they pass over. By comparing the concentration of carbon dioxide in air at the ATTO site with that of air on the coast, researchers will obtain information about the health of a large portion of the Amazon and the amount of CO2 it is absorbing. 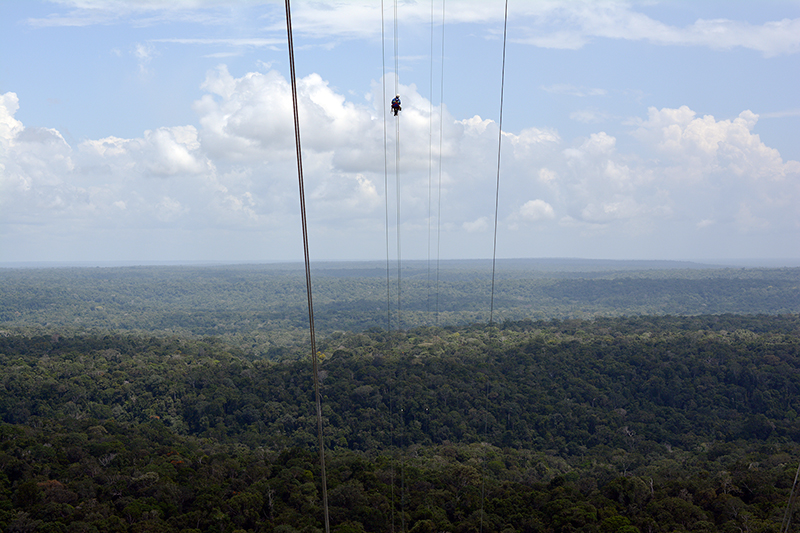 A scientist makes his way down one of the Tall Tower’s support cables. ANDREW CROZIER/MAX PLANCK INSTITUTE FOR CHEMISTRY

The Tall Tower will be equipped with anemometers and gas analyzers that will track the movement of carbon dioxide from the forest floor far into the atmosphere, using a process called the eddy flux technique. Researchers employ eddy flux measurements to identify sinks and sources of greenhouse gases, such as carbon dioxide, on towers around the world. A large number of inlet pipes will be secured to the tower at various heights. Gases and aerosols pumped from these sampling stations will flow into measurement devices operated inside climate-controlled laboratories fashioned from shipping containers and clustered at the base of the tower. About 50 Brazilian and 50 German researchers are already at work on a dozen experiments using the shorter towers, enduring the heat, humidity, and occasional threats from snakes or jaguars.

Except for Manzi, some scientists, and construction workers, hardly anyone has slogged to the Tall Tower’s summit. I trussed myself into a nylon safety harness and cinched it snugly through my legs and over my shoulders. I tied on locking carabiners the size of meat hooks, one for each hand. I hooked one claw onto a steel cable attached to the superstructure and stepped into the open stairwell. The cable runs continuously along the stairs at waist height, like a handrail.

Every ten feet or so, riggers had bolted the cable to the tower frame. At each intersection, I unclipped one clasp from below the fastener and, with a clank, clipped back in above it. I was always secured to the superstructure, assuring that, even if I might slip and dangle from the tower’s latticework, I wouldn’t fall to the ground. As I clanged my way higher and higher, the forest receded until the tree crowns looked like heads of broccoli. The temperature dropped and the wind picked up.

As I ascended, Bruce Nelson, a research scientist at the Brazilian Amazon Research Institute was servicing a camera bolted to the top of one of the 260-foot towers, several hundred yards away.

“When I first saw the forest from above,” Nelson had said earlier, “I thought maybe you could identify trees by their color.” He explained that the forest is a patchwork of brilliant chartreuse, drab olive, and innumerable other hues of green. The shades represent the different ages, not species, of crowns — a fact he has used to help investigate the influences that control forest productivity. 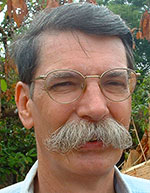 After declining by more than 70 percent in recent years, deforestation in the Amazon is soaring. In an interview with Yale Environment 360, scientist Philip Fearnside explains what’s driving the clearing of the Amazon and what needs to be done to once again bring deforestation under control. READ MORE

Tropical trees generally replace their leaves annually, but trees in the Amazon are not leafless for long and they don’t replace their crowns in synchrony. Nelson and his colleagues study the patterns of crown replacement by analyzing photos repeatedly shot from towers at ATTO and elsewhere, producing a time-lapse series. Displayed in chronological order, the pictures show each crown undergoing an identical sequence: new, bright leaves become dark with age and then drop, making way for new foliage.

These pictures show that a large percentage of trees renew their crowns during the forest’s driest months. Colleagues of Nelson’s have demonstrated that the young leaves of new crowns photosynthesize more vigorously. This means that a large number of trees sequester the most carbon during the driest periods, a counterintuitive result. It confirms other recent research suggesting that the forest may be somewhat resilient to drying, at least in the short term.

My calves ached and had become unsteady as I climbed the last flight of the Tall Tower’s stairwell. Mendes snapped a set of selfies. I lay down on the observation deck’s non-skid floor and contemplated the dawn sky and brightening land. Diaphanous rivers of fog meandered across the forest, nocturnal moisture hovering in streambeds and valleys.