Last Nov. 11, Jerry Cowley was fast asleep when he was wakened by the sound of someone violently banging on the front door of his bungalow in the Hudson Bay port town of Churchill, Manitoba. Thinking that it was his son coming home from a night at the bar, Cowley was going to scold him for losing his keys. Yet when he opened the door, Cowley was greeted not by his son, but by a large polar bear about to enter his living room.

“I told it to bug off!’” Cowley recalled the next day. “That’s the first time anyone has actually bugged off when I told them to.”

In the end, the bear did little damage to Cowley’s house. But he has since boarded up his porch, and his teenage daughter now sleeps in the attic. He’s also vowing never to answer the door again until he looks out the window to see who it is. 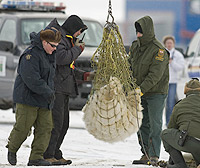 Getty Images
A tranquilized polar bear is removed from the polar bear “jail” outside of Churchill, Manitoba.
For decades, polar bears have been a fact of life in this so-called “Polar Bear Capital of the World.” Every year, several hundred animals come ashore when the last of the sea ice melts in July, usually spending four months on land before the sea ice re-forms and the bears can return to the ice to hunt seals, their primary source of food. But swiftly melting Arctic summer sea ice, particularly in the past decade, is forcing an increasing number of bears to swim ashore earlier on the west coast of Hudson Bay and to remain for longer periods of time.

In Churchill, this means that conservation officers from Manitoba’s Polar Bear Alert Team are exceptionally busy, particularly in the fall, as I learned when I spent several days with them in November. The 2005 closing of the town dump, which had been attracting large numbers of polar bears, was supposed to diminish the number of bears loitering in and around Churchill. But sea ice loss has kept the bears coming in large numbers.

Last summer and fall were typical of the new reality in Churchill: With sea ice offshore melting in June — a month earlier than what was typical 30 years ago, when sea ice persisted well into the summer months — more than 300 of the region’s polar bears came early to the town and its environs. Stuck onshore for a longer period, the bears increasingly came into conflict with Churchill’s roughly 1,000 residents.

The population of Western Hudson Bay polar bears has declined from 1,200 in 1987 to roughly 900 today, as the bears lose body mass and produce fewer cubs. Scientists who study the bears are now wondering how long this population of animals will survive if it continues to spend more time on shore, where there is almost nothing to eat.

“The loss of polar bears in western Hudson Bay is a given, from all of the science on sea ice and polar bear ecology that I have seen and been involved in,” says Andrew Derocher, a polar bear biologist with the University of

The residents of Churchill have a love/hate relationship with polar bears.

Alberta. “The main question now is when they will disappear from this part of the world. Our analyses suggest that the last bear in western Hudson Bay will die sometime within the next few decades.” Manitoba Conservation, the province’s wildlife agency, agrees that unless greenhouse gas emissions are reduced, “global warming may some day produce conditions in Hudson Bay that could not support a population of polar bears.”

Derocher was in Churchill last November when so many polar bears had wandered into the town that the 28-cell holding facility used to house the bears until ice re-forms on Hudson Bay was already full. The polar bear “jail” is in a refurbished, air-conditioned former airport hangar on the outskirts of town, and when it fills up, the Polar Bear Alert Team must make room for more recent problem bears by tranquilizing and flying some of the inmates to areas far from town.

The residents of Churchill have a love/hate relationship with polar bears, which were originally attracted in large numbers to the town when the Canadian military abandoned its base in phases in the 1960s and ‘70s. (The presence of the military, some of whose members shot the bears, kept the bears away.) Today, the arrival of the bears draws more than 10,000 tourists a year. But when a polar bear becomes a nuisance, residents know by heart the number they can call. Last summer and fall, Manitoba conservation officer Bob Windsor and his colleagues were busy for months. 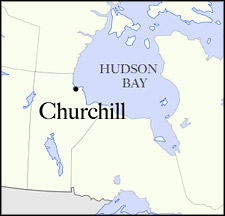 Wikimedia Commons/Yale e360
Churchill, on the west shore of Hudson Bay, where several hundred polar bears come ashore each summer.
On July 5, for example, a tall, skinny, 17-year-old male got in between a tourist taking pictures on the seashore and the safety of town. The bear was so aggressive that when Windsor drove up in his pick-up truck and fired a few blank shells, the animal turned on him before taking flight through several backyards.

In pursuit, Windsor heard the sound of someone screaming. Moments later, he found the bear standing in the middle of the road not far from a man who had been surprised — but unharmed — by the close encounter. This time the bear had no intention of taking flight when Windsor drove up hoping to escort the animal out of town, where he and his colleagues could safely tranquilize it.

“See that big dent in the hood of my truck,” Windsor told me as we conducted an early morning patrol in mid-November to make sure that children and adults could get to school and to work safely. “When I drove up to him the second time, he turned on me again, but I wasn’t able to back up fast enough. When he caught up with me, he reared up and stomped on the hood of the truck. I have never seen a bear act so aggressively.” In the end, the conservation officers had to shoot the bear.

Biologists and conservation officers like Windsor have done a good job over the past 30 years developing ways of detecting and deterring polar bears before it becomes necessary to tranquilize or kill them. In the early days, as many as 29 problem bears were killed in a season. But starting in 1981, the Polar Bear Alert Program began emphasizing conservation of bears, as well as protection of people and property. Remarkably, only one person has been killed by a bear since the program was launched.

The Polar Bear Alert Team’s actions, and the closing of the dump, were intended to reduce the number of human/bear confrontations, minimize damage to homes and businesses, and cut the number of bears that need to

Conservation officers say there is a correlation between the time bears spend on land and conflicts with humans.

be tranquilized or euthanized. Those actions have helped, but the steady disappearance of summer sea ice is complicating such efforts. Windsor and other conservation officers say there is a direct correlation between the time the bears spend on land and conflicts with humans. In 2009 — a warm year with later formation of sea ice — conservation officers documented 326 problems with polar bears in and around Churchill. In 2010, a cool year with more sea ice, the number of reported problems fell to 233.

Recognizing the tourism value of polar bears, the government of Manitoba has resisted proposals to allow sport and subsistence hunting, as both Nunavut and the Northwest Territories do. But many of the animals that live in the Churchill region in summer and fall migrate north into Nunavut Territory in winter, where the Inuit and guided hunters are free to shoot some of them.

Indeed, after slashing polar bear hunting quotas in 2007 out of concern for the declining number of polar bears in western Hudson Bay, the government of Nunavut has reversed course. It now claims, contrary to recent scientific studies, that western Hudson Bay polar bear populations are actually increasing, and Nunavut recently raised the annual quota of polar bear kills from eight to 21.

“In Nunavut, we have seen remarkable recovery of our polar bear populations since their historic lows in the 1970’s,” Daniel Shewchuk, then Nunavut’s environment minister, said in a news release last year, without releasing any details. The Inuit believe there are more bears than before because larger numbers of them are coming into villages and hunting camps. “The bears are not in trouble,” says Lois Suluk-Locke, a resident of the Nunavut town of Arviat. “There’s been so many it’s been scary.”

Scientists counter that this increase in sightings is tied to the delay in ice formation in Hudson Bay, which leads hungry bears to remain onshore in search of food. The bears have always migrated northward in autumn because sea ice used to form earlier up there. Now, the hungry bears are increasingly wandering into Inuit settlements, where local hunters store caribou, seals, and walruses on roofs and in sheds, scientists contend.

The University of Alberta’s Ian Stirling, arguably the world’s foremost expert on polar bears, says there is overwhelming evidence of the decline of polar bear populations in western Hudson Bay. Between 1980 and 2007, he and his colleagues found that pregnant females had lost, on average, more than 50 kilograms (110 pounds) in body mass. This resulted in smaller litters and a reduction in cub survival, leading to a steady drop in population.

For Hudson Bay Polar Bears,
The End is Already in Sight

The polar bear has long been a symbol of the damage wrought by global warming, but biologist Andrew Derocher and his colleagues have calculated how long one southerly population can hold out. Their answer? No more than a few decades, as the bears’ decline closely tracks that of the Arctic’s disappearing sea ice.
READ MORE
“If the climate continues to warm as predicted, and the ice continues to break up at progressively earlier dates, it seems pretty clear that in a few more decades not many adult females will be capable of reproducing in western Hudson Bay, and any cubs that might be born will have difficultly surviving,” he says.

Last Friday, the U.S.-based Center for Biological Diversity submitted a petition to the U.S. Department of the Interior seeking trade sanctions against Canada for violating conservation agreements on polar bears by allowing the continued hunting of the western Hudson Bay bears. As conditions deteriorate for polar bears there, some scientists say they can foresee a day when calls could arise to begin feeding the bears to keep them from going extinct.

“If the ice is gone, as is clearly predicted, feeding polar bears to sustain a semi-wild population is possible but unlikely to be a meaningful conservation measure for the longer term…,” says Derocher. “Feeding bears is fraught with lots of problems and it would have no real conservation value in the Churchill and western Hudson Bay region — because once the ice is gone, it’s not coming back any time soon.”