In the gentle hills outside York, England, a controversial experiment is quietly unfolding. It began in the summer of 2000 when Steven Willis, a biologist at the University of Durham, and his colleagues drove to a wildlife preserve called Wingate Quarry. In the back of their car was a cage full of butterflies called Marbled Whites. Willis and his colleagues removed the cage from the car, opened it, and let 500 butterflies flutter away across the scrubby meadows.

Marbled Whites are common in Europe and southern England, but in 2000 the northern edge of their range was 65 kilometers south of Wingate Quarry. Yet Willis and his colleagues suspected that they might do well there. Thanks to global warming, Wingate Quarry might now be mild enough for the butterflies to survive. 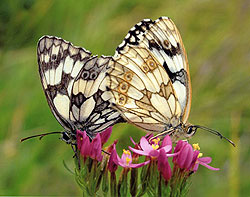 The Wildlife Trusts
The relocation of 500 Marbled White butterflies in York, England offers the first evidence of how managed relocation works.

Since releasing the butterflies, Willis and his students have returned to Wingate Quarry each year. They have walked a transect, counting the Marbled Whites they saw along the way, and have searched the area around the release to see how far they had dispersed. In February, they finally announced the results of their surveys in the journal Conservation Letters. The population of Marbled Whites of Wingate Quarry is steadily growing and slowly increasing its range. “They’re certainly holding their own,” says Willis.

Willis and his colleagues did not move the butterflies purely out of scientific curiosity. A number of studies indicate that global warming will rob many species of their current habitat, pushing them towards extinction. Some conservation biologists argue that the only way to save some species may be to move them to new ranges that they can’t get to themselves.

This strategy — which goes by various names including assisted migration, assisted colonization, and, most recently, managed relocation — only emerged in the scientific literature in 2007. Over the past two years it has attracted widespread interest. A number of scientists are now investigating how they can pick new homes for endangered species and move them safely. Willis’s new paper now provides the first proof of principle that conservation biologists can select new places where species will thrive. Congress may even include funding for research on managed relocation in upcoming climate change legislation.

But managed relocation is also now the subject of a fierce backlash from some leading conservation biologists. In a newly published essay, Daniel Simberloff of the University of Kentucky and Anthony Ricciardi of McGill University call it a game of “ecological roulette.”

By the 1990s it became clear that a number of animal and plant species were on the move because of rising global temperatures. Species in the northern hemisphere were expanding their ranges north; Southern Hemisphere species were moving the other way. Animals and plants that lived on mountainsides were spreading up the slopes. The weight of the evidence pointed towards global warming as the cause of these shifts. A warmer climate opened up new territory that some species could colonize.

Even if species have clear pathways to new habitat, they may not have time to keep up with the speed of climate change.

While global warming might make new territories suitable for some species, it might also put other territories off limits. The hamster-like American pika, for example, lives on mountainsides and ridges in the western United States. Pikas typically lived at an elevation of 5,700 feet, but in recent decades they’ve moved uphill more than an additional 2,000 feet. There’s only so much further the Pikas can go before they run out of mountain. As a result, the Center for Biological Diversity is petitioning the U.S. Fish and Wildlife to designate the pika as an endangered species due to climate change.

Animals that live in low-lying forests may have an easier time finding a suitable climate, but they may be hobbled for different reasons. The Quino checkerspot butterfly, for example, is an endangered species that lives in southern California and Baja. It appears to have lost some of its southern range to climate change, but it can’t shift north because it can’t survive in the urbanized landscape of San Diego.

Even if species have clear pathways, they may not have enough time to keep up with the speed of climate change. As they creep toward suitable climates, the warmer end of their range may become uninhabitable. As a result, they will become trapped in smaller areas. In 2001, Willis was one of 15 researchers who surveyed 46 species of butterflies in Great Britain and found that three-quarters of them had declined over the previous 30 years — a result consistent with a loss of range due to a warming climate.

Smaller ranges may put some species at greater risk of extinction. While scientists can’t make precise predictions about global warming’s effects on biodiversity, their rough estimates are chilling. In 2004, 19 researchers published a paper in Nature in which they concluded that if mid-range projections of global warming prove right, climate change would shrink the ranges of 15 to 37 percent of all species so drastically that they would be “committed to extinction.”

A conventional strategy for conserving species — such as setting up a preserve where they live now — may not work against global warming. Trying to save the American pika by protecting mountaintops may be futile if the entire mountain gets too warm for them. So conservation biologists began to wonder if they might have to ship species to new places.

They’d done it before. To bring wolves back to Yellowstone, for example, wildlife managers had imported animals from Canada. But in that case and others like it, animals and plants were returned back where they had once been. Managed relocation would require conservation biologists to move species to places where they might never have dwelled, and that’s never been done before.

Jason McLachlan and Jessica Hellmann of Notre Dame University and Mark Schwartz of the University of California at Davis first broached the possibility in the journal Conservation Biology in 2007. They did not endorse managed relocation, but simply argued that conservation biologists should openly discuss the benefits and risks seriously before anyone started to move species around. In 2008, Hellmann, McLachlan, Schwartz, and Sax established a 30-person Managed Relocation Working Group that is working on a detailed analysis of when and how to resort to the strategy.

Until now, no one had any hard data on how managed relocation might turn out. That has changed.

Managed relocation has also earned some high-profile endorsements over the past year. In July 2008, a group of leading conservation biologists published a piece in Science in which they argued that there might be little choice but to move some species. “The future for many species and ecosystems is so bleak that assisted colonization might be their best chance,” they wrote. Camille Parmesan, one of the co-authors and a biologist at the University of Texas, has pointed to the American pika as a candidate. The Ecological Society of Australia has endorsed managed relocation as well as a way to help species cope with climate change.

Up until now, however, all the talk about managed relocation to defend against climate change has been in the abstract. No one had any hard data on how such a move might turn out. That’s changed now that Willis and his colleagues have published their results from relocating butterflies. (In the same paper, the biologists also describe how they released 600 small skipper butterflies north of their range in 1999 and 2000, with similar success.)

“We think this is the first test,” says Willis. “And we’ve demonstrated it does have the potential to work.”

But Daniel Simberloff, an ecologist at the University of Kentucky, is not impressed. “It seems like this idea is developing into a bandwagon,” he says. “It’s a thing to do, but it doesn’t have a sound scientific foundation.”

In March, Simberloff and Anthony Ricciardi of McGill University in Montreal published a fierce attack on managed relocation in the journal Trends in Ecology and Evolution. Ricciardi and Simberloff’s concerns stem from their decades of research on biological invasions. Humans shuttle many species from their native habitat to a new home each year. Most of the introductions are accidental. A species may hitchhike across an ocean in the ballast water of a ship. Snakes sneak up the wheel wells of airplanes. People sometimes buy pets smuggled in from other countries and then abandon them. On the other hand, some introductions are intentional. Rabbits were brought to Australia by a bored rancher who wanted something to shoot.

Most of the alien species introduced to new places die off. Some establish small populations that don’t disturb the native ecosystem. And others wreak havoc, driving native populations towards extinction.

Invasion biology is a busy scientific discipline (Simberloff is editor-in-chief of a journal, Biological Invasions, dedicated to the topic). But it’s still too young, according to Simberloff and Ricciardi, to predict what will happen to a particular species introduced to a particular place. “I’m skeptical that we’ll ever be really good at it,” says Simberloff. “There are always going to be mistakes.”

Even carefully planned introductions that seem to pose no risk sometimes go awry. Wildlife managers introduced a North American freshwater shrimp into Flathead Lake in Montana to feed kokanee salmon (that were themselves introduced for fishing). The nocturnal shrimp avoided the diurnal salmon and began gobbling up zooplankton the salmon were eating. The salmon population crashed, and so did the eagle population that depended on it.

It may be hard to imagine an endangered species turning into an ecological monster. Yet a number of animals and plants have undergone exactly this makeover. The Australian Paperbark Tree is endangered in its native Australia, thanks to logging on private land. Around 1900 the tree was introduced into southern Florida, where it has spread aggressively, shutting out native trees from its dense stands and frequently catching ablaze.

Simberloff says he doesn’t have any good solutions to offer in the place of managed relocation. “That doesn’t mean that the best thing to do is try something that either might not work or might have unintended consequences that are even worse,” he warns.

“Is the alternative just to forsake a species?” she asks. “I just don’t want to sit back and say, ‘Oh the world is going to hell.’”