Melting ice sheets, calving glaciers and rising sea levels: scenarios of impending inundation fill the news, while climate change skeptics assure us that these are long-term problems, part of the natural cycle of things. One thing is certain: These are multi-decade changes in a warming world, which we’re tempted to leave to future generations.

But as Hurricane Katrina and Superstorm Sandy forcibly reminded us here in the United States, warming brings more extreme weather events — and the catastrophic inundations that accompany them. In the short term, destructive and very expensive sea surges are the most immediate consequence of rising sea levels. And nothing provides a more sobering reminder of our vulnerability than the awesome cyclones that often accompany these surges in Bangladesh.

Bangladesh lies at the head of the Bay of Bengal, the world’s largest river delta formed by the Ganges, Brahmaputra, and Meghna rivers. Water covers some 10,000 square kilometers of the country, most of which lies close to sea level. An arabesque of waterways large and small cuts through the coastal plain. In the past, a unique mosaic of beach and tidal forests, as well as dense mangrove swamps, acted as a cushion against sea surges and cyclones. Two hundred years ago, more than 11,000 square kilometers of mangrove swamps and forests protected the coast. But today, this natural coastal barrier is under threat from promiscuous forest clearance for agricultural land, from shrimp farming, and from the construction of barrages for irrigation works. Most natural coastal protection is gone.

Between 1947 and 1988, 13 severe cyclones ravaged the lowlands of Bangladesh, killing thousands.

Cyclones and their fearsome sea surges descend on Bangladesh with a furious intensity that has killed millions of people over the centuries. Between 1947 and 1988 alone, 13 severe cyclones ravaged the lowlands, causing thousands of deaths and sweeping away villages and defensive embankments. 1970’s Cyclone Bhola brought winds as high as 185 kilometers an hour. At least half a million people died, as well as a million head of cattle. More than 400,000 houses vanished. Forty-six thousand fishermen perished. 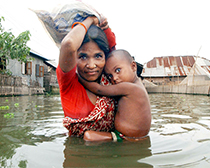 A mother and child on the outskirts of Dhaka, after monsoon floods. JEWEL SAMAD/AFP/GETTY IMAGES

What will happen in the future, if, as scientists are predicting, warmer conditions bring stronger and more frequent cyclones, and Himalayan glaciers far to the north melt faster and swell the great rivers hundreds of kilometers downstream? Most of Bangladesh lies on the fertile alluvial plains of the Ganges and Brahmaputra rivers. Would conventional flood works provide a solution?

Expensive international schemes proposed by the World Bank envisage building nearly 8,000 kilometers of dikes to control the rivers, at a cost of $10 billion, but many local farmers oppose the scheme because it would result in forced changes to their farming methods. Nor would massive dikes like those in the Netherlands solve the problem, for the subsoil is alluvial sand and mud, which shifts constantly. In any case, Bangladesh lacks the funds to pay for such expensive projects.

The best solutions appear to lie with the people themselves and with judicious government investments in infrastructure and flood-protected housing. Numerous farmers are building houses on stilts that stand above even the most severe floods. There are smaller-scale solutions as well, among them simple dwellings built on half-meter concrete plinths to support dwellings with inexpensive jute panel walls that are easily replaced after a flood.

For many Bangladeshis, there remains but one option — to move away completely.

At the same time, CARE and other organizations are encouraging Bangladeshi farmers to use long-abandoned agricultural methods that include floating gardens, which are well suited to areas that are flooded for long periods of time. Bamboo and dense beds of hyacinth, as well as last year’s decomposed vegetation, allow the growth of vegetables for sale in markets for most of the year. Salt-resistant rice varieties are another solution, as they are fast-growing crops that can be harvested before the monsoon rains arrive. A policy of breaching earthen dikes to encourage silt deposition as the water drains away helps the land rise and counters the effects of rising sea levels.

An estimated 17 to 40 million people in Bangladesh will be affected if current projections of the effects of sea level rise become reality. As the land is gradually lost to rising salinity and the ocean, with no prospect of recovery, there remains but one option for many Bangladeshis — to move away completely. The effects are somewhat akin to those experienced by small, low-lying islands like the Maldives or Tuvalu in the Central Pacific. In the case of Tuvalu, however, you are looking at somewhere around 10,000 out-migrants. Bangladesh has tens of millions of potential refugees, under circumstances where there is effectively nowhere for people to resettle. 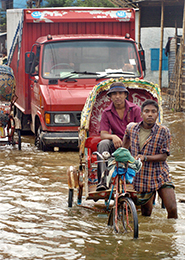 People in the threatened areas of Bangladesh are in quadruple jeopardy because they have limited income sources, low resilience, and, above all, little capacity for adaptation, especially when, as is the case, population growth is rapid and there is great disparity in the distribution of wealth and livelihoods.

Traditionally, people from rural villages have moved to the capital of Dhaka and other cities to seek employment. However, in Bangladesh, which is one of the world’s most densely populated countries, cities and towns are already bursting at the seams, and there are few job opportunities. Given the slow nature of the environmental changes taking hold there, it’s likely that both internal and external migration will be voluntary and, at first, on a relatively small scale. It’s when the pressure increases decades from now that political and security problems will mount, especially in a country surrounded by neighbors, primarily India, with whom relations are at times tense.

The problem is by no means unique to Bangladesh. Globally, an estimated 200 million people live within five meters of sea level, including many in megacities. Shanghai, one of the world’s great cities, lies at or near sea level. The city is subsiding, and the authorities there are investing in sea defenses; but they also persist in filling in low-lying coastline for more development. Florida, with its shoreline high-rises, spends millions on coastal defenses, which are, at best, temporary palliatives in the face of destructive sea surges. Dubai’s government has invested in artificial islands in the Gulf region, which are largely delusional hubris in the face of rising sea levels. It is only a matter of time before a truly epochal disaster destroys large tracts of a coastal megacity and tens of thousands die.

Cyclones and storm surges are nothing new in human experience. What is new is the extent of damage they can cause in a densely populated coastal world and the enormous numbers of people affected by them, often catastrophically.

The impending crisis is not just a Bangladeshi problem but also one that affects us all — for it will. We should remember Article 2.1 of the United Nations Covenant, which gives all a right to a ”means of subsistence.” Rising sea levels and their consequences threaten that right in Bangladesh and elsewhere.

The defense strategy of last resort — managed resettlement not for thousands, but for millions — may move to the front burner. At present, there are no international policies for dealing with the involuntary population movements caused by climate change. But there’s no question that they will be needed within a generation or two. The sooner we start thinking about the problem, the better.