The most venerated predator on Earth, the tiger is also the most vulnerable, described in a recent World Bank document as “enforcement-dependent.” The phrase is borrowed from the medical world, where patients reliant on blood products are known as “transfusion-dependent.” Saved only by scarce conservation dollars and thin ranks of poorly equipped park guards, the tiger’s hold on life is tenuous. Without future infusions of expensive, well-coordinated, state-of-the-art life-support, Panthera tigris is doomed in the wild.

Now, in one of the most high-profile conservation interventions in recent memory, the World Bank is stepping in to try to secure that life support. At a meeting later this month, the bank’s president, Robert Zoellick, will seek approval from the leaders of 13 tiger range countries for an extraordinarily ambitious plan to save the world’s few remaining tigers and their habitat. At the same time, a group of leading tiger scientists and conservationists is lobbying for a similar effort to protect the tiger’s last remaining breeding populations. 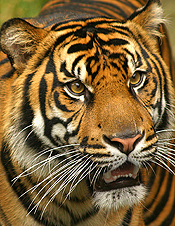 The tiger’s situation has grown desperate in a mere century. A hundred years ago, there were over 100,000 in the wild, with more than 40,000 in India alone. Currently, the total number of tigers worldwide is calculated at fewer than 3,500. Three subspecies — Javan, Bali, and Caspian tigers — vanished during the 20th century. A fourth, the South China tiger, has not been seen in the wild for more than 25 years and is assumed to have gone extinct during the 1990s.

Remaining populations — including 1,850 Bengal tigers and a few hundred each of the Siberian, Indochinese, Malayan, and Sumatran subspecies — are pressed into tiny, isolated protected areas comprising less than 7 percent of their former range. Found in India, Nepal, Bangladesh, Bhutan, Myanmar, and China, the Bengal tiger possesses the highest genetic variation, and is considered the key to the species’ survival.

Tiger is occasionally served in restaurants in Hanoi and Beijing, where rare dishes denote status.

Blocking tiger recovery efforts in India and elsewhere is the black market in the animal’s body parts. Although the World Federation of Chinese Medicine Societies cooperated with conservation efforts by removing tiger bone from their pharmacopeia in 1993, skins still sell for up to $35,000, and organs and body parts — bones, whiskers, eyeballs, penises, paws, claws — are snapped up as souvenirs or ingredients of traditional Asian medicine. Tiger is occasionally served at restaurants in Hanoi and Beijing, where rare dishes denote high status. In Russia, the uber-wealthy have acquired a taste for tiger pelts as home dÃ©cor; in Sumatra, magic spells require tiger parts.

Potential profits are so corrupting that criminal entrepreneurs in China raise captive tigers in cages, eventually slaughtering the animals for their body parts, skin, and bones, which are boiled to make a medicinal “tiger wine.” Legalizing tiger “farming” has been proposed by the Chinese government as a solution to the illegal trade, to drive down prices. The move has been strongly opposed by the World Bank and trafficking experts. A recent Conservation Biology study points out that consumers say they want wild tiger parts, not farmed ones.

Tigers lucky enough to escape the poachers face being shot or poisoned by villagers angered by livestock losses. Starvation in the wild presents another peril: Prey depletion and habitat degradation are eroding the species’ future. A breeding female Bengal tiger needs two deer a week, an Amur tiger more than 20 pounds of meat a day to make it through the winter. Because of these threats and the tiger’s rapid decline, the International Union for the Conservation of Nature, arbiter of the authoritative “Red List” of endangered species, is considering changing its status from “Endangered” to “Critically Endangered.” That’s the last stop before the bitter end: “Extinct in the Wild,” and, ultimately, “Extinct.”

So countries and conservation organizations are urgently rallying to save the tiger, but their efforts are shadowed by the fact that the species has been “saved” before. Early in the 1970s, the tiger population in India fell to a similarly alarming level, below 2,000. President Indira Gandhi backed what may have been the most comprehensive single-species conservation plan of its time: Project Tiger, a system of dedicated national reserves supported by teams of rangers. Tiger numbers doubled over the next 15 years.

“The level of assault on natural areas [in Asia] is unprecedented in human history.”

But after Gandhi’s assassination in 1984, the reserves fell victim to mismanagement, corruption, and neglect, and India’s rapidly growing economy sparked a massive expansion of infrastructure as cities ballooned, roads and highways were built, and hydropower and mining projects were launched to boost power production. For tigers, this was bad news. John Seidensticker, a senior scientist at the Smithsonian’s National Zoo who has been working on these issues for decades, describes development across Asia as devastating for wildlife, particularly for the large, connected landscapes necessary for big cats. “Roads are horrible ecological traps for tigers,” he said. “The level of assault on natural areas [in Asia] is unprecedented in human history. Tigers need big areas. That’s where the rub is.”

China’s economy took off as well, and millions of new consumers were able to buy wildlife products flooding the market. Having eaten its way through its own tigers, China turned to India, where poachers went after tigers in reserves. The scandal broke in 2005, with news reports saying that India’s wildlife officials had been cooking the books — it turned out that in one of India’s most renowned tiger reserves, Sariska in Rajasthan, poachers had extirpated the entire tiger population. Last year, news came that another reserve, Panna, had also lost its tigers.

India’s crisis served one purpose: It triggered a global re-evaluation of tiger conservation at the highest levels, and a new and unlikely defender of the species appeared on the scene, Zoellick of the World Bank. Formerly a managing director at Goldman Sachs, Zoellick quickly allied himself with Carter Roberts, president of WWF. Since his appointment in 2007, Zoellick has sought to make conservation a centerpiece of World Bank policy and tigers his personal priority. His office is dominated by a map depicting shrinking tiger habitat since 1850.

Under his direction, the World Bank commissioned a 2008 study and, together with the Smithsonian, the Global Environment Facility (funding mechanism for much international conservation), and international NGOs, launched the Global Tiger Initiative in 2009. The bank possesses “convening power” among its 187 member countries and began organizing international workshops that culminated in an unprecedented plan to gather together world leaders of all tiger range countries. The Tiger Summit will be held on Nov. 21, during the waning days of this Year of the Tiger, in St. Petersburg, Russia. Such political capital expended on a conservation issue is unprecedented. For the first time in history, one of the world’s top financiers has galvanized worldwide support in defense of an endangered species.

The leaders are expected to issue a declaration endorsing the bank’s Global Tiger Recovery Program, which aims to double tiger numbers in the wild by 2022; restore and reconnect tiger habitat across borders and on a landscape level; bring illegal trafficking under control through improved compensation and community programs, better enforcement, and educational campaigns; and develop long-term financing schemes to pay for it all. The draft document outlining the program is a manifesto for a new paradigm of conservation, seeking to counter the notion that this might be another single-species conservation project. The program seeks to protect the tiger as the apex predator in its ecosystem and as an emblem of all biodiversity in that system. Protection of the tiger, it states, entails protection of tiger landscapes, which also function as critically important watersheds serving 832 million people. Conservation, the program’s author’s insist, “is no longer a fringe concern.”

Poaching continues to pose a seemingly insurmountable problem. Losses of 2 percent a year threaten the tiger with immediate extinction, according to John Scanlon, secretary-general of CITES, the Convention on International Trade in Endangered Species of Wild Fauna and Flora. Scanlon admitted that his chief of enforcement “feels extraordinarily frustrated” in being unable to penetrate the criminal circles that perpetuate tiger smuggling. At CITES’ international meeting in March, China and India argued against a proposed resolution requiring more detailed reporting on incidents of tiger poaching, with China claiming that CITES’ compliance measures set a “dangerous” precedent. While a revised resolution passed, it exposed China’s reluctance to grapple with its role in consuming tigers.

Critics have also pointed out that the World Bank itself has a checkered history when it comes to conservation projects, particularly in India. A young Indian biologist, Ghazala Shahabuddin, did an in-depth study of a $67 million World Bank-sponsored tiger recovery project in India from 1994-2004. It “failed visibly,” Shahabuddin writes, largely due to an inability to engender the enthusiastic participation of local people.

Critics point out the World Bank has a checkered history when it comes to conservation projects.

Renowned tiger biologist K. Ullas Karanth, who works with the New York-based Wildlife Conservation Society (WCS), called the earlier initiative a thinly veiled method for the World Bank to troll for profitable lending opportunities in India and China while “simultaneously green-washing its warty environmental visage.” At the Nagarahole Tiger Reserve, Karanth said that consultants made away with much of the money as 12,000 timber trees were smuggled from the reserve and tiger and elephant poaching rose. “Despite huge investments,” he concluded, the Bank’s project “damage[d] wildlife and habitats without increasing local community support.”

The World Bank’s plan — aimed at governments — has also triggered competitive jockeying in the nonprofit world, which will undoubtedly end up implementing much of it. A recent PloS Biology article — “Bringing the Tiger Back from the Brink — The Six Percent Solution,” authored by specialists from the WCS and other organizations — proposed a different approach. It argued that the international community should focus resources on 42 “source sites” that contain nearly 70 percent of the world’s tigers and cover just 6 percent of their former range, “to ensure that the last remaining breeding populations are protected and continuously monitored.” The publication of the paper underlined how many parties are competing to be heard and how unclear the lines of authority, enforcement, and coordination may be.

The most radical overarching goal of the World Bank’s tiger recovery plan seems to concern the future of global conservation as much as tigers. The clear implication of the Tiger Summit is that nations must begin to take responsibility for conservation and not leave it to a ragtag, uncoordinated network of overlapping UN-funded programs and non-profit organizations. The idea of pressing countries to “mainstream” conservation — recognizing the economic value of such ecosystem services as carbon sequestration, fresh water, and flood control — is increasingly gaining traction at the international level.

An essential part of the equation will be wildlife. With radical reappraisals of ecosystem economics under way, Zoellick and the bank hope to tweak carbon schemes such as REDD (Reducing Emissions from Deforestation and Forest Degradation) to place value on tigers. One of the fears surrounding these schemes has been that they may encourage the proliferation of “empty” forests, protecting standing timber while habitat is stripped of wildlife. In response, the World Bank has developed a Wildlife Premium Market Initiative, which could be attached to REDD and would pay higher benefits, in the form of carbon payments, to participating countries. In return, those countries would be required to monitor and verify tiger numbers. “We want to ensure that the mechanisms to protect ecosystems such as forests do not leave them silent,” Zoellick said, “without the roar of the tiger or the elephant’s trumpet.”