Ever since Olga Owen Huckins shared the spectacle of a yard full of dead, DDT-poisoned birds with her friend Rachel Carson in 1958, scientists have been tracking the dramatic toll on wildlife of a planet awash in pesticides. Today, drips and puffs of pesticides surround us everywhere, contaminating 90 percent of the nation’s major rivers and streams, more than 80 percent of sampled fish, and one-third of the nation’s aquifers. According to the U.S. Fish and Wildlife Service, fish and birds that unsuspectingly expose themselves to this chemical soup die by the millions every year.

But as regulators grapple with the lethal dangers of pesticides, scientists are discovering that even seemingly benign, low-level exposures to pesticides can affect wild creatures in subtle, unexpected ways — and could even be contributing to a rash of new epidemics pushing species to the brink of extinction.

In the past dozen years, no fewer than three never-before-seen diseases have decimated populations of amphibians, bees, and — most recently — bats. A growing body of evidence indicates that pesticide exposure may be playing an important role in the decline of the first two species, and scientists are investigating whether such exposures may be involved in the deaths of more than 1 million bats in the northeastern United States over the past several years. 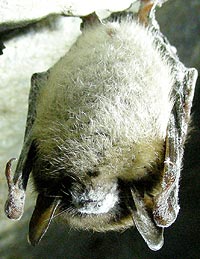 Wikimedia
White-nose Syndrome, named for the tell-tale white fuzz it leaves on bats’ ears and noses, has killed more than a million bats in the northeastern United States.

For decades, toxicologists have accrued a range of evidence showing that low-level pesticide exposure impairs immune function in wildlife, and have correlated this immune damage to outbreaks of disease. Consumption of pesticide-contaminated herring has been found to impair the immune function of captive seals, for example, and may have contributed to an outbreak of distemper that killed over 18,000 harbor seals along the northern European coast in 1988. Exposure to PCBs has been correlated with higher levels of roundworm infection in Arctic seagulls. The popular herbicide atrazine has been shown to make tadpoles more susceptible to parasitic worms.

The recent spate of widespread die-offs began in amphibians. Scientists discovered the culprit — an aquatic fungus called Batrachochytrium dendrobatidis, of a class of fungi called “chytrids” — in 1998. Its devastation, says amphibian expert Kevin Zippel, is “unlike anything we’ve seen since the extinction of the dinosaurs.” Over 1,800 species of amphibians currently face extinction.

It may be, as many experts believe, that the chytrid fungus is a novel pathogen, decimating species that have no armor against it, much as Europe’s smallpox and measles decimated Native Americans in the sixteenth and seventeenth centuries. But “there is a really good plausible story of chemicals affecting the immune system and making animals more susceptible,” as well, says San Francisco State University conservation biologist Carlos Davidson.

There is a strong correlation between upwind pesticide use and declining amphibian populations.

In California, for example, insecticides coated on the crops of the San Joaquin Valley are known to waft upwind to the Sierra Nevada mountains, where they settle in the air, snow, and surface waters, and inside the tissues of amphibians. And when Davidson compared historical reports of pesticide use, habitat loss, wind patterns, and amphibian population counts in California for the years 1971 to 1991, he found a strong correlation between upwind pesticide use — in particular cholinesterase-inhibiting chemicals such as the insecticide carbaryl — and declining amphibian populations.

Experimental evidence bolsters Davidson’s findings. In lab experiments, exposure to carbaryl dramatically reduced yellow-legged frogs’ production of fungus-fighting compounds called antimicrobial peptides, which may be crucial to amphibians’ ability to fend off chytrid fungus. Further testing has shown that amphibian species that produce the most effective mixes of antimicrobial peptides resist experimental chytrid infection, and tend to be those that survive most successfully in the wild.

Six years after scientists discovered the fungal assault on amphibians, a mysterious plague began decimating honeybees. Foraging honeybees first started vanishing from their hives, abandoning their broods and queens to certain death by starvation, in 2004. Alarmed beekeepers dubbed the devastating malady “colony collapse disorder.” Between 2006 and 2009, colony collapse disorder and other ills destroyed 35 percent of the U.S. honeybee population.

Some experts believe colony collapse disorder is the result of a “perfect storm” of honeybee-debilitating factors: poor nutrition, immune dysfunction from decades of industrial beekeeping practices, and the 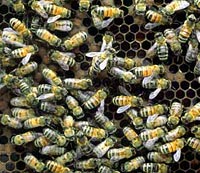 Some scientists believe a new class of chemicals based on nicotine may be to blame for “colony collapse disorder” that destroyed nearly 35 percent of the U.S. honeybee population between 2006 and 2009.

opportunism of multiple pathogens, acting in malevolent concert. But many beekeepers believe that a new class of chemicals based on nicotine, called neonicotinoids, may be to blame.

Neonicotinoids came into wide use in the early 2000s. Unlike older pesticides that evaporate or disperse shortly after application, neonicotinoids are systemic poisons. Applied to the soil or doused on seeds, neonicotinoid insecticides incorporate themselves into the plant’s tissues, turning the plant itself into a tiny poison factory emitting toxin from its roots, leaves, stems, pollen, and nectar.

In Germany, France, Italy, and Slovenia, beekeepers’ concerns about neonicotinoids’ effect on bee colonies have resulted in a series of bans on the chemicals. In the United States, regulators have approved their use, despite the fact that the Environmental Protection Agency’s standard method of protecting bees from insecticides — by requiring farmers to refrain from applying them during blooming times when bees are most exposed — does little to protect bees from systemic pesticides.

“The companies believe this stuff is safe,” says U.S. Department of Agriculture (USDA) entomologist Jeff Pettis. “It is used at lower levels, and is a boon for farmers,” since neonicotinoids don’t require repeated application, nor wide broadcasting into the environment, he explains. Plus, years of research have shown that only very low levels of the chemicals are exuded from the pollen and nectar of treated plants.

The bat die-off ‘is the most precipitous wildlife decline in the past century in North America.’

But University of Padua entomologist Vincenzo Girolami believes he may have discovered an unexpected mechanism by which neonicotinoids — despite their novel mode of application — do in fact kill bees. In the spring, neonicotinoid-coated seeds are planted using seeding machines, which kick up clouds of insecticide into the air. “The cloud is 20 meters wide, sometimes 50 meters, and the machines go up and down and up and down,” he says. “Bees that cross the fields, making a trip every ten minutes, have a high probability of encountering this cloud. If they make a trip every five minutes, it is certain that they will encounter this cloud.”

And the result could be immediately devastating. In as-yet-unpublished research, Girolami has found concentrations of insecticide in clouds above seeding machines 1,000 times the dose lethal to bees. In the spring, when the seed machines are working, says Girolami, “I think that 90 percent or more of deaths of bees is due to direct pesticide poisoning.”

Girolami has also found lethal levels of neonicotinoids in other, unexpected — and usually untested — places, such as the drops of liquid that treated crops secrete along their leaf margins, which bees and other insects drink. (The scientific community has yet to weigh in on Girolami’s new, still-to-be-published research, but Pettis, who has heard of the work, calls it “a good and plausible explanation.”)

Two years after the honeybees started disappearing, so, too, did bats. The corpses of hibernating bats were first found blanketing caves in the northeastern United States in 2006. The disease that killed them, caused by a cold-loving fungus called Geomyces destructans — and dubbed White-nose Syndrome for the tell-tale white fuzz it leaves on bats’ ears and noses — has since destroyed at least one million bats. University of Florida wildlife ecologist John Hayes calls it “the most precipitous wildlife decline in the past century in North America.”

Like the mysterious Batrachochytrium dendrobatidis fungus infesting amphibians, Geomyces could be a novel pathogen, newly preying upon defenseless bat species. But scientists have also started to investigate whether pesticide exposure might be playing a role.

Bats are especially vulnerable to chemical pollution. They’re small — the little brown bat weighs just 8 grams — and can live for up to three decades. “That’s lots of time to accumulate pesticides and contaminants,” points out Boston University bat researcher and Ph.D. candidate Marianne Moore, who is studying whether environmental contaminants suppress bats’ immune function. “We know they are exposed to and accumulate organochlorines, mercury, arsenic, lead, dioxins,” she says, “but we don’t understand the effects.”

Which, in the end, is the central dilemma facing pesticide-reliant societies. Proving, with statistical certainty, that low-level pesticide exposure makes living things more vulnerable to disease is notoriously difficult. There are too many different pesticides, lurking in too many complex, poorly understood habitats to build definitively damning indictments. The evidence is subtle, suggestive. But with the rapid decimation of amphibians, bees, and bats, it is accumulating, fast.