How will the world find the water to feed a growing population in an era of droughts and water shortages? The answer, a growing number of water experts are saying, is to forget big government-run irrigations projects with their mega-dams, giant canals, and often corrupt and indolent management. Farmers across the poor world, they say, are solving their water problems far more effectively with cheap Chinese-made pumps and other low-tech and off-the-shelf equipment. Researchers are concluding that small is both beautiful and productive.

“Cheap pumps and new ways of powering them are transforming farming and boosting income all over Africa and Asia,” says Meredith Giordano, lead author of a three-year research project looking at how smallholder farmers are turning their backs on governments and finding their own solutions to water problems.

“We were amazed at the scale of what is going on,” Giordano says. Indian farmers have an estimated 20 million pumps at work watering their fields. As many as 200 million Africans benefit from the crops they water. And in

addition to pumps, she notes, “simple tools for drilling wells and capturing rainwater have enabled many farmers to produce more crops in the dry season, hugely boosting their incomes.”

Such innovations are becoming a major driver of economic growth, poverty reduction, and food security, says her report, Water for Wealth and Food Security, published by the International Water Management Institute (IWMI), a research center based in Sri Lanka.

The report says better support for this hidden farmer-led revolution could increase crop yields threefold in some places — and could add tens of billions of dollars to the household incomes of poor farmers across Africa and south Asia, the two regions where the majority of the world’s poor and food-insecure rural people live.

But such help could be a while coming, because much of the revolution is happening out of sight of governments and international organizations. In Ghana, the study found, small private irrigation schemes cover 185,000 hectares — 25 times more land than public irrigation projects. “Yet when I asked the agriculture minister there about these schemes, he hadn’t even heard of them,” says Colin Chartres, director of IWMI. 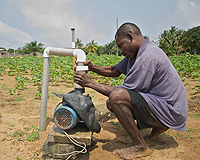 Joe Ronzio/IWMI
A farmer uses a small pump to irrigate his fields in Keta, Ghana.
For years, national governments and aid agencies have believed that centrally planned and run irrigation schemes, mostly tapping large rivers, are the answer to the world’s growing shortage of reliable water supplies needed to grow the food for people in arid countries and those with highly seasonal or unpredictable rainfall. But the record of such schemes has proved patchy at best. The 2000 report of the World Commission on Dams, set up by the World Bank, found that a quarter of dam-fed irrigation schemes watered less than 35 percent of the land intended, cost over-runs were almost universal, and a quarter of the irrigated fields were waterlogged or poisoned by salt.” Not surprisingly, farmers have increasingly been making their own arrangements for water.

I have seen this revolution taking hold all over the world in recent years. In northern Nigeria, I saw the canals of the state-owned Kano Irrigation Project clogged with weeds and the fields often untended, while a few miles away, farmers lined up pumps on the banks of the river, diverting its flow to their fields.

Across India, I met farmers who are reviving the ancient tradition of digging ponds to capture water as it falls onto their land during the short monsoon, storing it for growing crops during the long dry season. In Mexico, I found farmers irrigating fields in the middle of a state irrigation scheme by pumping up the prodigious amounts of water seeping from unlined irrigating canals.

Charlotte de Fraiture of UNESCO’s Institute for Water Education in Delft, the Netherlands, agrees there is a hydrological revolution going on. Rich farmers have always had the money to buy pumps, she says, but “with the

Farmers can now buy inexpensive Chinese-made water pumps for as little as $200.

availability of cheap Chinese pumps, this type of irrigation is accessible to a much larger range of farmers.” You can now buy pumps at almost any town market for as little as $200.

Even the cheapest models transform livelihoods. “The capacity of even a small pump with one to five horsepower is bigger than most farmers need,” says de Fraiture. “So they hire them out.”

In India, small-time rural entrepreneurs travel the countryside on bikes or donkey carts, with pumps strapped on the back. They rent the pumps for a dollar an hour, so even the poorest farmers can get some water from a local river or underground water reserve. In Burkina Faso in West Africa, pump owners supply a complete service, keeping small vegetable gardens irrigated for $120 to $150 per growing season.

Of course, pumps need a power source, usually either electricity or diesel. But in India, some farmers are using dung from their cows to generate biodiesel. One Gujarati practitioner told IWMI researchers that dung-powered pumping saved him $400 a year in fuel.

Such farmers are not being green; they are being pragmatic. According to the IWMI’s Chartres, a big push by aid groups a few years ago to get poor farmers to invest in treadle pumps to raise water from shallow aquifers beneath their fields has largely failed. “Most farmers don’t want to sit in the hot sun all day, pumping up water with their feet,” he says. “Not when you can hook up a motor pump for a few dollars.”

Farmers are also finding inexpensive ways to conserve water by using drip irrigation — delivering water down pipes from where it drips through holes close to plant roots. Conventional drip irrigation is costly to install. But in central India farmers have found a novel solution. They buy rolls of cheap perforated plastic tubing that ice-pop sellers use to package their frozen candies. The perforations, which the ice-pop sellers use to tear off each individual popsicle holder, turn out to be ideal for dripping water close to crop roots. 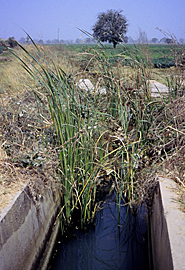 Fred Pearce
Canals carrying water from the Kano Irrigation Project in Nigeria are clogged with weeds.
Too often, we have a picture of poor smallholder farmers as passive victims of natural disasters, or the grateful recipients of aid from others. But here they emerge in a different light. It is they — rather than governments, NGOs or Western aid-givers — who are the active players, taking charge of their own destiny.

But there is a downside, which the IWMI report touches on, and which in some regions is a major threat to both future water supplies and the survival of the farming communities themselves.

The danger is that independent action by farmers to water their fields is creating a “tragedy of the commons” — in which everyone grabs what water they can while they can, because they know that all will suffer when the water runs out. This is especially a risk where farmers are pumping out underground water reserves at rates that the rains cannot replenish.

Seven years ago, I toured Gujarat with Tushaar Shah, head of IWMI’s groundwater research station. He was in despair at what he called “hydrological anarchy” in the Indian state. A million farmers had bought cheap pumps that they were plugging into the heavily subsidized state electricity grid. The pumps often ran 24 hours a day, bringing massive volumes of underground water to the surface. The farmers’ yields often doubled, but the water tables were plummeting. “It looks like a one-way trip to disaster,” he told me then. “Nobody knows where the pumps are, or who owns them. There is no way anyone can control what happens to them.”

Yet today, Shah is one of the co-authors of the IWMI study advocating more of the same. What changed? He says that, on his advice, the state government of Gujarat has tamed the anarchy by restricting power supplies for farmers to eight hours a day. Water tables are still falling, he admits,

Much of Africa has abundant water much of the time. What’s needed is to find better ways to store and tap it.

but with pumping time limited, the decline is much slower than before.

Many will think the IWMI report underplays the risk of hydrological anarchy. But, when I put this to Chartres, he countered that in many places, there is still huge scope to encourage farmers to make better use of both surface and underground water. In some of the poorest parts of eastern India, there is water to spare and there are better livings to be had. In Madhya Pradesh, for instance, farmers have increased their incomes by 70 percent by constructing on-farm ponds.

The story is the same in sub-Saharan Africa. Much of the continent is often thought of as short of water. The images of hungry people searching for food in droughts are seared in our memories. But much of Africa has abundant water for much of the time — what’s needed is to find better ways to store and tap it.

State-sponsored irrigation projects in Africa have a dismal record. IWMI quotes a UN estimate that only 3 percent of sub-Saharan Africa’s renewable water resources are currently used for agriculture. Given how little is known about African farmers’ informal irrigation, this is probably an underestimate. But even so, there is clearly room to scale up. Millions of Africans could transform their livelihoods by deploying pumps, according to Chartres. “There are huge investment opportunities for unlocking the potential of this farmer-led approach,” he says.

What should be done? Chartres calls for more investment in bringing electricity to rural communities, encouraging the local manufacture of pumps, and supporting local water entrepreneurs. He says this should be coupled with an effort to map water reserves and prevent farmers from taking too much when supplies are tight.

Can ‘Climate-Smart’ Agriculture
Help Both Africa and the Planet?

One idea promoted at last year’s climate talks in Durban was “climate-smart agriculture,” which could make crops less vulnerable to heat and drought and turn depleted soils into carbon sinks. But, as Fred Pearce reports, some critics are skeptical that it will benefit small-scale African farmers.
READ MORE
De Fraiture agrees. She despairs that governments and donors alike “continue to focus their attention and investments on the underperforming public irrigation sector, when private irrigation is both more important and has larger potential” for scaling up.

The new thinking from IWMI about managing water supplies has a striking parallel with how researchers are discussing other global commons, notably forests. Once it was assumed that only states could protect forests. But recent research suggests that local people often know best how to both protect and use them.

Now the same lesson seems to be emerging for water.

Governments cannot shirk their responsibility for ensuring that water is used wisely. But perhas they should give up the idea that the water in rivers and underground is theirs alone — or that only they can manage it.