In November, the first shipment of raw “rare earth” minerals arrived at an $800 million processing plant on Malaysia’s east coast near the home of Tan Bun Teet. The plant, run by Australia’s Lynas Corporation, has since begun refining the rare earth metals, essential components in wind turbines, hybrid cars, smart phones, cruise missiles, and other high-tech products. Once fully operational, the plant would become the world’s largest processing facility of rare earths, breaking China’s near-monopoly on producing the prized elements.

But Tan and others in the region are concerned that the Lynas Advanced Materials Plant, known as LAMP, will be plagued by the severe environmental problems that have been the hallmark of rare earths processing plants in China and, more than two decades ago, in Malaysia itself. The plant lies in an industrial zone atop reclaimed swampland, just 12 miles from Kuantan, a city of 600,000. The chief worry is that the rare earth elements are bound up in mineral deposits with the low-level radioactive element thorium, exposure to which has been linked to an increased risk of developing lung, pancreatic, and other cancers. 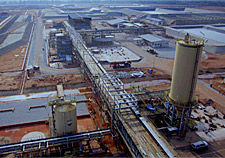 The Lynas plant in Malaysia is set to become the world’s largest processing facility of rare earths. LYNAS CORPORATION LTD

“We are not against rare earths processing,” says Tan, a retired schoolteacher who leads a citizens’ group opposed to the plant. “We’re only against the inappropriate choice of site, and the way they’re going to keep the waste.” Tan echoes scientists’ concerns that the plant’s toxic wastewater will leach into groundwater, and that its storage ponds are vulnerable to the monsoons that slam the swampy coastline every autumn.

As global demand has surged in recent years for rare earth elements, fears have grown that China, which accounts for more than 95 percent of rare earths output, will withhold supplies, as it did temporarily two years ago during a dispute with Japan. As a result, across five continents and numerous countries — including the United States, Brazil, Mongolia, and India — rare earth processing projects are being launched or revived. With them comes the potential threats to the environment and human health that have plagued China’s processing sites.

“As the world’s hunger for these elements increases… the waste is going to increase,” says Nicholas Leadbeater, a chemist at the University of Connecticut whose research focuses on developing green technologies. “The more mines there are, the more trouble there’s going to be.” To avoid such problems, Leadbeater says some researchers are now looking into ways of recovering rare earths from existing products, and of manufacturing products capable of running without rare earths. Toyota, for example, is developing an electric motor that does not use rare earths in its battery, as most currently do.

Contrary to their name, the 17 rare earth elements are relatively common — their rarity comes from the labor involved in separating them from surrounding rock. The process requires a cocktail of chemical compounds and produces a “tremendous amount” of solid waste, according to the U. S. Environmental Protection Agency. China’s rare earths mines have used only a fraction of the world’s total supply, and substantial untapped reserves are found in Australia, the United States, parts of the former Soviet Union, and other countries. Global demand for rare earths dipped last year on the heels of a speculative bubble, but the EPA said in December there is a “high likelihood” that some of the elements will be in short supply by 2014.

In California, Molycorp Minerals recently reopened a rare earths processing operation that it abandoned in 2002 near Death Valley, after retooling its operation to meet environmental concerns over contaminated groundwater. In Brazil, mining giant Vale is considering whether to process rare earths at a copper mine in the Amazon. India recently agreed to export rare earths to Japan, and a Toyota subsidiary is preparing to mine rare earths in Vietnam. In Greenland, several companies are preparing to mine and process that island’s abundant rare earth resources, which will become more accessible as Greenland’s ice sheet continues to melt.

All of these projects, however, must come to grips with the toxic and radioactive legacy of rare earth mining. Scientists say under-regulated rare earths projects can produce wastewater and tailings ponds that leak acids, heavy metals and radioactive elements into groundwater, and they point out that market pressures for cheap and reliable rare earths may lead project managers to skimp on environmental protections.

In Malaysia, Mitsubishi Chemical is now engaged in a $100 million cleanup of its Bukit Merah rare earths processing site, which it closed in 1992 amid opposition from local residents and Japanese politicians and environmentalists. It is one of Asia’s largest radioactive waste cleanup sites, and local physicians said the thorium contamination from the plant has led to an increase in leukemia and other ailments. The legacy of that project has led many Malaysians to be wary of rare earths mines.

A half-century of rare earths mining in China has caused serious environmental problems.

Bayan-Obo, China’s largest rare earths project, has been operating for more than four decades. According to the Germany-based Institute for Applied Ecology, the site now has an 11-square-kilometer waste pond — about three times the size of New York City’s Central Park — with toxic sludge that contains elevated concentrations of thorium.

China’s lax environmental standards have enabled it to produce rare earths at roughly a third the price of its international competitors, according to a 2010 report on the country’s rare earths industry by the Washington-based Institute for the Analysis of Global Security. The report noted that China “has never actually worked out pollutant discharge standards for the rare earth industry.”

Like nuclear power plants, rare earths projects require strict independent auditing in order to prevent environmental damage, according to Peter Karamoskos, a nuclear radiologist and the public’s representative at Australia’s Radiation Protection and Nuclear Safety Agency. But as the rare earths industry expands to developing countries like Malaysia and Vietnam, such oversight will be unlikely. “A regulator will either be in the pocket of the industry or a government,” he says. 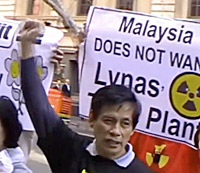 According to Gavin Mudd, an environmental engineer at Australia’s Monash University, rare earths mining provides a wide range of economic and social benefits and can be exploited in a responsible way. However, he says no company — including Mitsubishi and Lynas — has managed to set a good example.

Mudd says Lynas decided to process its rare earths in Malaysia rather than Australia, where they are mined, because it received tax incentives. But he says that Lynas hasn’t meaningfully engaged Malaysian communities to hear their concerns. A key problem with the company’s proposals, he adds, is that it never took a baseline sample of the environment before it began operations, making it difficult to gauge the future environmental impacts. “Their approach to solid waste management has been very haphazard,” says Mudd, who has offered unpaid advice to both the company and the activists who oppose its plans.

Lynas executives, including Executive Chairman Nicholas Curtis, say the plant will operate under high environmental standards and will dilute the thorium-tainted waste by mixing it with lime until it is below accepted international concentrations for the radioactive material. The lime mixture will be turned into solid structures that could be used for sea walls or construction materials, Lynas has said, although it remains unclear where those structures would be exported, and whether the process would use all of the plant’s toxic waste. Curtis has said that there is no comparison between his facility and the old Mitsubishi one, which “never should have been built.”

A recently released study of the plant by the Institute for Applied Ecology sketches a less sanguine portrait of the potential environmental impacts.

The Malaysian plant sits atop reclaimed wetland that is prone to flooding and lies only two miles from the sea.

The study faults a Lynas plan to dispose of wastewater through an open channel rather than a closed pipeline; a refusal by the company to disclose what the plant’s exact chemical byproducts will be; and a temporary waste storage facility that the institute predicts will cause radioactive leakage “even under normal operating conditions.” A Lynas spokesperson from the company’s Australia headquarters did not respond to a request for comment.

Over the next two decades, the plant is expected to produce about 1.2 million metric tons of “residue,” according to 2011 report prepared by Lynas for Malaysia’s nuclear regulatory agency. It said the plant’s waste will fall within radioactivity limits set by the International Atomic Energy Agency, and may be safely disposed of in “landfill type facilities with limited regulatory control.”

The waste, however, will emit low levels of carcinogenic radioactivity for centuries, according to scientists. The International Atomic Energy Association recommended in 2011 that Malaysia’s nuclear regulatory agency grant Lynas an operating license only after it submits a permanent decommissioning plan. Unlike Australia, Malaysia is not a party to the IAEA’s legally binding 2001 convention governing appropriate and safe disposal of radioactive waste.

For most of last year, Lynas was locked in court battles against retired schoolteacher Tan Bun Teet and his grassroots coalition “Save Malaysia, Stop Lynas!,” which challenged the government’s January decision to grant the company a temporary operating license. This fall, Lynas finally won its temporary operating license after clearing legal appeals, and Tan says the first truckload of rare earths from the company’s Australia mine rolled into its new Malaysia refinery on November 30 under police escort. But four Malaysian cabinet ministers warned in December that the company must export the radioactive waste from its new plant or risk losing its license.

Tan Bun Teet and his fellow activists, whose street protests in the Malaysian capital have faced tear gas and water cannons, are keeping up their legal fight by filing new appeals. Tan is especially concerned that the 247-acre Lynas plant sits atop reclaimed wetland that is prone to flooding and lies only about two miles from the South China Sea. The area receives about 10 feet of rainfall per year, and recent monsoon rains left the area drenched.

“We are worried,” he says. “We don’t want our environment to be destroyed as it was in China.”