Last month, France — including the City of Light — grew darker late at night as one of the world’s most comprehensive lighting ordinances went into effect.

From 1 a.m. to 7 a.m., shop lights are being turned off, and lights inside office buildings must be extinguished within an hour of workers leaving the premises. The lighting on France’s building facades cannot be turned on before sunset. Over the next two years, regulations restricting lighting on billboards will go into effect. These rules are designed to eventually cut carbon dioxide emissions by 250,000 tons per year, save the equivalent of the annual energy consumption of 750,000 households, and slash the country’s overall energy bill by 200 million Euros ($266 million).

But no less a motivation, says France’s Environment Ministry, is to “reduce the print of artificial lighting on the nocturnal environment” — a powerful acknowledgement that excessive use of lighting in many parts of the world is endangering our health and the health of the ecosystems on which we rely. The good news, however, is that light pollution is readily within our grasp to control.

The good news is that light pollution is readily within our grasp to control.

Until recently, efforts to restrain our use of light have been primarily in response to the astronomical light pollution erasing starry nights. But researchers are increasingly focusing on the impacts of so-called ecological light pollution, warning that disrupting these natural patterns of light and dark, and thus the structures and functions of ecosystems, is having profound impacts.

The problem is worsening as China, India, Brazil, and numerous other countries are becoming increasingly affluent and urbanized. Satellite views of Earth at night show vast areas of North America, Europe, the Middle East, and Asia glowing white, with only the world’s remotest regions — Siberia, the Tibetan plateau, the Sahara Desert, the Amazon, and the Australian outback — still cloaked in darkness. Some countries, such as Britain, and some U.S. states — including Connecticut and California — have enacted regulations to reduce light pollution, but most nations and cities still do little to dial down the excessive use of light.

Technological advances such as LEDs, or light-emitting diodes, can improve our ability to reduce and better regulate lighting, but these same new lights may actually make things worse because they contain heavy doses of a “blue-rich” white light that is especially disruptive to circadian rhythms.

Scientists are investigating new ways to provide society with the lighting it demands for security, commerce, and aesthetics, while greatly reducing the flood of light that is increasingly interfering with human health and the ability of many creatures to function. One research group funded by the German government — Verlust der Nacht, or Loss of Night — is coordinating numerous studies on light pollution, ranging from research into the socio-political challenges of cutting light pollution in the Berlin metropolitan area to the effects of light pollution on nocturnal mammals.

A nighttime view of San Francisco. THOMAS HAWK VIA FLICKR

Some 30 percent of vertebrates and more than 60 percent of invertebrates are nocturnal, and many of the rest are crepuscular — active at dawn and dusk. All are potentially impacted by our burgeoning use of artificial light, scientists say. “We have levels of light hundreds and thousands of time higher than the natural level during the night,” explains Italian astronomer Fabio Falchi, a creator of the World Atlas of the Artificial Night Sky Brightness, the computer-generated maps that dramatically depict the extent of light pollution across the globe. “What would happen if we modified the day and lowered the light a hundred or a thousand times?” That would be much worse, he concedes. But his point? “You cannot modify [light] half the time without consequences,” says Falchi.

Every flip of a light switch contributes to altering ancient patterns of mating, migration, feeding, and pollination, with no time for species to adapt. On the Caribbean island of Tobago, a 2012 study of leatherback turtles — a species that has been on Earth for 150 million years — found that “artificial lighting of the nesting beaches is the biggest threat to survival of hatchlings and a major factor in declining leatherback turtle populations.” Evolved to follow the reflected light of the stars and moon from the beach to the ocean, hatchlings now instead follow the light of hotels and streetlights, with the result that they die of dehydration, are devoured by predators, or run over by cars.

Many migrating birds, drawn off-course by artificial light, join the breathtaking number — between 100 million and 1 billion, we don’t really know — killed each year by collision with human-made structures. For moths, which help pollinate the world’s flora, our outdoor lights are irresistible flames, killing countless moths and other insects, with ripple effects throughout the food chain.

Other recent studies show that for bats — whose natural pest control benefits U.S. agriculture alone by billions of dollars annually, according to a 2011 study in Science — artificial light disrupts patterns of travel and feeding since many bat species avoid illuminated areas. Recent articles on a menagerie of species reflect a new awareness of artificial light’s effects on ecology. For example, research has shown that street lighting influences the migratory pattern of Atlantic salmon, and that bright lights also change the composition of entire communities of insects and other invertebrates.

Every flip of a switch alters ancient patterns of mating, migration, and feeding.

Of course, “humans are animals as well,” explains Steven Lockley of Harvard Medical School’s Division of Sleep Medicine, “and so when light/dark cycles mess up seasonal patterns of trees or breeding cycles of amphibians, there’s no reason to think it’s not doing the same to us.”

As recently as 1980, humans were thought to be immune to the effects of artificial light at night. But continuing research has shown that nocturnal light disrupts our sleep, confuses our circadian rhythms — those 24-hour biological processes that regulate our body’s functions — and impedes the production of the hormone melatonin at much lower levels than previously thought possible.

More and more of the light we see at night — whether electronic gadgets or outdoor lighting — is rich with the blue wavelengths most disruptive to our body’s rhythms. (More than any other wavelength, blue wavelength light tells our brain that night is over, that morning’s blue sky has returned, and that the day has begun — the opposite signal that we want to be sending our brain in the middle of the night.) Studies continue to suggest that the consequences of excessive exposure to light at night include an increased risk for obesity, diabetes, and cardiovascular disease. Last year, the American Medical Association issued a statement calling for increased research into the “risks and benefits of occupational and environmental exposure to light-at-night,” and recommending “new lighting technologies at home and at work that minimize circadian disruption.” 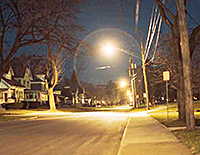 In fact, researchers are concerned about the impact of some new lighting technologies. While their capacity to be computer-controlled and directed could make LEDs a key tool in reducing light pollution, these lights may actually make things significantly worse. Touted as energy-efficient and clearer in color, most LEDs currently being installed are often brighter than the old lights they are replacing, further increasing light pollution. In fact, explain Falchi and others in a recent article from the Journal of Environmental Management, LEDs could “exacerbate known and possible unknown effects of light pollution on human health (and the) environment” by more than five times.

Researchers and dark-sky advocates are seeking to mitigate the harmful effects of new lighting technologies and devise solutions to the flood of light that erases the night in many parts of he world. The International Dark-Sky Association and the Illuminating Engineering Society of North America have together designed the Model Lighting Ordinance, which communities of any size can adopt. The MLO recommends limits for the amount of light in five different zones of lighting intensity. The ordinance also recommends banning unshielded lighting in all zones.

In the Journal of Applied Ecology, researchers have identified numerous practical steps to reduce light pollution: changing the spectral composition of lighting (especially LEDs), limiting the duration of lighting, reducing the “trespass” of lighting into areas not intended to be lit, altering the intensity of lighting, and preventing areas from being artificially lit in the first place.

The relatively simple act of shielding our lights — installing or retrofitting lamp fixtures that direct light downward to its intended target — represents our best chance to control light pollution. While we seldom leave our interior lights bare, most of our outdoor lighting remains unshielded, sending light straight into the sky, into our eyes, into our neighbors’ bedrooms. Until recently, consumers had few buying choices, but that is changing. Companies such as Lowe’s, the home-improvement chain, now offer lines of shielded lighting fixtures. Street lighting, stadium lighting, parking lot and gas station lighting — all can be now be shielded.

Light pollution continues to grow at up to 20 percent, depending on the region.

The objection will be that we need all this light for safety and security, with the justification that light equals safety, and darkness danger. This common belief goes far to explain why many gas stations and parking lots are lit more than ten times as brightly as they were just 20 years ago, and why light pollution continues to grow at up to 20 percent per year, depending on the region. In fact, the issue of light at night and safety is complex, with little compelling evidence to support common assumptions. For example, ever-brighter lights can actually diminish security by casting glare that impedes our vision and creates shadows where criminals can hide.

Experts say it is far more important to use light effectively than abundantly. Explaining France’s new lighting rules, Delphine Batho, until recently France’s environment minister, described the government’s desire to “change the culture” to include responsible use of light. This change is to be applauded, for what increasing numbers of studies — as well as our own eyes — tell us is that we are using far more light than we need, and at tremendous cost.