Last fall, the climate advocacy group 350.org held a series of rallies in 21 cities across the U.S., making the case that combating climate change requires fossil fuel companies to leave a large portion of their reserves in the ground — and that large-scale divestment by their shareholders could help convince them to do so. Since then, four small U.S. colleges have committed to ridding their endowments of fossil fuel investments, and more than 250 other colleges and universities have spawned student- or faculty-led divestment campaigns pushing for action in the next five years.

When the group held a rally in Seattle in November, a couple of unusual things happened.

First, the night ended with a commitment to set the divestment process in motion — a rarity in what can be a long and difficult process. Second, the promise came not from a university, but from Mike McGinn, the mayor of Seattle, making the city the first in the U.S. to embrace fossil fuel divestment. 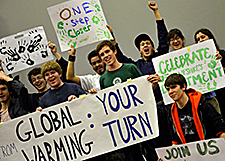 Hampshire College students celebrate after the Massachusetts school pulled investments from fossil fuels in 2012. STUDENTS FOR A JUST AND STABLE FUTURE

But 350.org organizers doubt it will be the last. Within the next few weeks, the group is planning to launch a new, off-campus component of its campaign, targeting not just colleges and universities, but also governments, churches, unions, community groups, companies — almost any institution with a pension fund, endowment, or other major investment in fossil fuels.

“Cities in particular can help pinpoint the absurdity of, on the one hand, spending huge sums to build seawalls while at the same time investing in the companies that make it necessary,” 350.org founder and president, Bill McKibben, said in an email.

“The logic of divestment is pretty simple,” says Jay Carmona, who recently joined 350.org to oversee off-campus divestment projects. “If you don’t like what a company is doing, you don’t pay them to do it.”

There’s plenty of skepticism about the campaign — and not just from the fossil fuel industry, which pushed back by commissioning a study arguing that universities would lose out on high-performing investments by giving up their stocks in oil and gas companies. University administrators have expressed concern that losing those investments could impact their ability to offer scholarships and financial aid; some pension fund managers say they can have more influence on companies if they speak up as shareholders.

But enthusiasm for divestment, already high on college campuses — student referenda at Harvard and the University of North Carolina, for example, showed 72 and 77 percent support for divestment, respectively — is leaking into the outside world. The campaign’s organizers point to Seattle’s commitment, a bill in Vermont’s state senate, a resolution to be considered by the United Church of Christ General Synod in June, and citizen-led campaigns in Portland, St. Louis, and New York City. In San Francisco, the Board of Supervisors will hold a hearing next month on a proposal to jettison $1 billion of fossil fuel investments held by the city’s pension fund.

‘Divestment is targeting the one thing those companies can’t buy, which is their reputation.’

Carmona sees these as just the beginning. While 350.org’s efforts have thus far focused primarily on campuses, the new program will encourage a much wider range of institutions and organizations to examine the impact of their investments. Cities, she says, are an obvious target: “A lot of people are trying to tackle climate change at the municipal level, and it makes little sense for them to be trying to do that while also invested in fossil fuel companies that are working against those changes.”

Mayor McGinn lists divestment alongside Seattle’s other climate initiatives, from expanding mass transit to creating a climate action plan. “I hope other cities will look at it,” he says. “I think they should. I think it’s the right thing to do.”

John Avalos, the Board of Supervisors member who introduced San Francisco’s resolution, says he was inspired by Seattle’s example and expects other cities to follow. “They want their investments to be compatible with their climate goals,” says Avalos.

But what can divestment really accomplish? While it’s been widely touted that colleges and universities have some $400 billion in endowments, only a small percentage is actually in fossil fuel stocks. Seattle found, for example, that its pension fund has invested $17.6 million with Chevron and Exxon — less than 1 percent of the total fund. While it’s likely that the fund holds shares of other fossil fuel companies, it’s still nowhere near the amount of money it would take to have a real impact on the oil giants.

But organizers argue that political and cultural impacts are at least as important as financial ones. “Divestment is targeting the one thing that those companies can’t buy, which is their reputation,” says Carmona.

Despite student enthusiasm, there is no sign yet of a critical mass of support from university administrators.

In fact, a 1999 study argued that even the South African campaign didn’t create substantial financial pressure on companies doing business with the regime, since socially “indifferent” investors were quick to take advantage of undervalued stock prices after divestment temporarily caused them to fall. The strongest impact of the campaign was in influencing public opinion: Every university that announced it was dumping its stock helped paint involvement with the South African regime as a moral failure.

For all the student enthusiasm about fossil fuel divestment on university campuses, there’s no sign yet of anything like a critical mass of support from university administrators, a number of whom have protested that fossil fuel divestment undercuts the primary purpose of endowments: Generating maximum return on investments in order to fund school operations. Students at Bowdoin College say this is why administrators rejected their divestment request.

Mark Orlowski of the Sustainable Endowments Institute contends that, for universities, one possible answer to the economic question is to invest in their own energy efficiency programs. He maintains that university investments now tied up in fossil fuels could actually produce much better returns if redeployed as “green revolving funds” that invest in on-campus energy efficiency projects and then continually reinvest the savings. The median return on such green funds in 2012, the institute concluded in a study, was 28 percent.

And while fossil fuels are good investments now, climate change means that may not always be the case. An analysis earlier this month by the credit rating agency Standard & Poor’s and the non-profit Carbon Tracker Initiative warned that oil companies are likely to become much riskier investments in the future. Indeed, some large institutional investors warn that not responding to climate change constitutes a significant economic risk. A 2012 memo from several major investment networks responsible for more than $22.5 trillion in assets put it bluntly: “Further delay in implementing adequately ambitious climate and clean energy policy will increase investment risk for institutional investors and jeopardize the investments and retirement savings of millions of citizens.”

‘We want a future that is not reliant on taking fossil fuel reserves and putting them in the atmosphere,’ says Seattle’s mayor.

Campaigns targeting governments will have to overcome the same economic objections as those targeting universities, and then some. “Pension funds have different mechanics than endowments, including state and even federal laws governing how they can be invested,” says Carmona. “There’s a new learning curve.”

That has certainly been the case in Seattle. When McGinn sent a letter asking the pension system governing board to look into divesting fossil fuel stocks from $2.6 billion in retirement funds it controls, he found that Seattle hadn’t yet developed a protocol for making such decisions. Divestment, it turned out, is new territory for the city: The board is now working on developing a system for evaluating whether — and how — to do so.

Divestment advocates say that process is actually an advantage of their campaign — a chance for institutions to take a more active role in ensuring that their investments reflect their values. That’s an important need, says Mindy Lubber, president of the sustainable investing group, Ceres, and director of the Investor Network on Climate Risk. Lubber has worked with many large-scale institutional investors, including government pension funds with hundreds of billions in assets. Many of them, she says, recognize that “the economics of fossil fuels, in the long-term, are catastrophic for companies, for sectors, and for the economy.”

Author/activist Bill McKibben says environmentalists cannot ease up in their fight against the Keystone XL pipeline. In a conversation with e360 contributor Elizabeth Kolbert, he talked about what he’s learned about the power of the fossil fuel industry — and why the battle over Keystone is far from over.READ MORE

Still, she believes that many funds whose managers are concerned about climate change are unlikely to divest: “Their fundamental belief is that they could probably get more done as owners of the companies. Their theory of change is different: Hold on to those stocks, file shareholder resolutions, engage with the boards, change the practices.”

McKibben argues that simply pushing for changed practices is insufficient when it comes to fossil fuel companies. “Our job is to help people come to understand that these are now rogue industries—that, quite literally, if their business plans are followed, the planet tanks,” he says.

As the fossil fuel divestment movement grows, more institutions will have to grapple with the economic, ethical, and strategic questions it raises. “By joining in the divestment movement,” says McGinn, “we’re making a statement about what kind of future economy we want — one that is not reliant on taking the fossil fuel reserves we have and putting them into the atmosphere.”