Thousands of white-winged gannets soared above the cliffs as our boat circled the Bass Rock. The island, a steep-side volcanic edifice off the east coast of Scotland, is home each year to the world’s largest colony of northern gannets (Morus bassanus). More than 150,000 birds nest on an island of three hectares — or five birds per square meter. Since the birds have a wingspan not far short of two meters, that makes for cramped conditions. Their plumage turns the entire island a brilliant white in the sun. 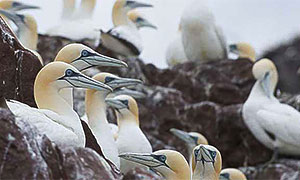 Bass Rock, off the coast of Scotland, is home to the world’s largest northern gannet colony. SCOTTISH SEABIRD CENTRE

But maybe not for much longer, says Tom Brock, CEO of the Scottish Seabird Centre in nearby North Berwick. He fears the record-setting colony could be decimated by the construction of the largest concentration of offshore wind turbines in the world. Last October, the Scottish government gave planning approvals for four farms containing a total of 335 giant turbines and covering more than 850 square kilometers on nearby submerged sand banks.

The banks are rich in sand eels and other fish on which the gannets feed. The gannets and other seabirds will be killed by the turbine blades as they forage in the area or fly through en route elsewhere, Brock says. The only question is how many.

In the past five years, the shallow waters of the North Sea between Britain, Germany, and Scandinavia have become the world’s proving ground for major offshore wind farms, containing hundreds of turbines up to 200 meters high. Of the 25 biggest offshore wind farms currently in operation around the world, all but two are in Europe, with 11 in the U.K. alone. The majority of these are in the North Sea.

More huge farms are on the drawing board. Last year, according to an analysis for the United Nations Environment Programme, final investment decisions worth an additional $16.2 billion were made on offshore wind projects in Europe. Between 6,000 and 7,000 megawatts of generating capacity — estimated to power about 4 million homes — are slated for British waters alone by 2020, says the report’s author, Udo Steffens of the Frankfurt School of Finance and Management.

This is how crowded Europe will ramp up renewable energy generation to the scale needed to supplant onshore coal and nuclear power stations.

My one-hour flight up the east coast of Britain, from London to Scotland, gave me a guided tour of this new offshore energy frontier. It took me past 13 large North Sea wind farms containing 877 turbines with a combined capacity of more than 3,000 megawatts. They included the world’s two largest: the London Array and Greater Gabbard, which together have 315 turbines manufactured by the German company Siemens, each generating 3.6 megawatts. Among those set to join them will be two farms on Dogger Bank, a large sandbank famous for shipwrecks. At around 125 kilometers (77 miles) offshore, these will be the most distant wind farms ever attempted.

And Britain is not alone. On the North Sea’s eastern shores, wind farms pepper the coast of Denmark; Germany’s $1.7 billion Borkum Riffgrund project just began generating power north of the Frisian islands; and the Dutch start work later this year on the world’s most expensive project, costing $3.8 billion.

Offshore wind farms are more costly than onshore farms both to construct and to link to land-based grids. But they benefit from more persistent and stronger winds and the lack of human neighbors. They can be rolled out on a scale able to deliver green electricity to meet the European Union’s commitment to getting 20 percent of its energy from renewables by 2020.

Offshore wind can be rolled out on a scale able to meet the EU’s commitment to renewable energy.

In Edinburgh, in an office overlooking Princes Street thronged with tourists, I met Stephen Kerr, project director of the Inch Cape Wind Farm, one of the four farms planned for the North Sea northeast of Edinburgh, which together will have 2,200 megawatts of generating capacity. As technology advances, the turbines are getting bigger, cheaper, and more powerful, he said. “Individual turbines can now generate 8 megawatts or more. That is 60 percent more than when we started design in 2009.”

But meanwhile, research into the aerodynamics of turbulence downwind of turbines is encouraging designers to put turbines further apart to maximize output. “The rule of thumb used to be five diameters apart, but now it is nine or ten,” Kerr said.

Energy planners in Europe hope to combine wind power from the North Sea with solar energy from the south, geothermal from Iceland, and hydroelectricity from Scandinavia to create an international electricity grid dominated by renewables — whatever the weather.

But as ambition grows, public perceptions of renewables are changing. A decade ago, most European saw wind farms and solar panels as local ways of generating “green” electricity, independently of big corporations. Most onshore wind farms were small and locally owned. But offshore wind is a big global business, requiring big engineering and big funding. Inch Cape is a joint project of Repsol, a Spanish energy giant, and EDP, Portugal’s largest utility. Other big players in the North Sea include Masdar, the Abu Dhabi government’s renewable energy company. 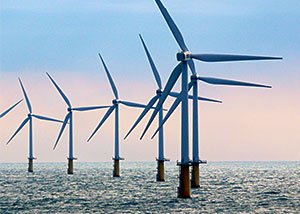 Princess Amalia Wind Farm in the North Sea, off the Netherlands coast, is comprised of 60 turbines. AD MESKENS/WIKIMEDIA COMMONS

Although no longer about local empowerment, offshore wind has at least appeared to be environmentally benign. But while nobody doubts its credentials for producing low-carbon energy, the presumption that offshore wind is no threat to wildlife is increasingly being questioned. There are concerns especially about construction noise frightening marine mammals over wide areas of ocean, and about the threat that huge working farms may sometimes pose to birds.

The latter concern applies especially off Scotland, which is home to 45 percent of the European Union’s breeding seabirds. They live at staggering densities on cliff faces and volcanic islands, such as the Bass Rock, and travel long distances to forage for food around the offshore sand banks whose shallow waters also attract wind farm developers.

For this reason, the U.K.’s Royal Society for the Protection of Birds (RSPB), which has largely supported the hundreds of smaller wind farms on hilltops across Scotland, has opposed almost all the offshore plans to date. It says that while onshore wind farms rarely damage birds, badly sited offshore farms are unlikely to be so benign.

The concerns are shared, if more quietly, by government scientists. Last July, three months before ministers approved the plans for Inch Cape and the three other wind farms off Edinburgh, the Joint Nature Conservation Committee, which advises the British government, set boundaries for three marine protected areas off east Scotland that substantially overlap the wind-farm zones. And it proposed that the banks receive tougher protection under the EU Birds Directive. The committee listed renewable energy as an activity “capable of affecting the protected features of the site,” and noted, “We have an international responsibility to protect [seabirds] around Scotland.” Yet the wind farms still got the go-ahead.

Conservationists say that in the rush to offshore wind, not enough research has been done on the risks.

That apparent policy conflict is one reason why the RSPB has mounted a legal challenge to the government for failing to uphold conservation law when granting approval for the farms. Judicial hearings will begin in late May.

The conservationists’ case is that in the rush to put wind farms offshore, not enough research has been done to ascertain the risks. “There are half a million seabirds in this area. Nowhere in Europe are there such internationally important seabird colonies so close to such major wind farms,” says Brock.

At Inch Cape Wind, Kerr is frustrated at the challenge. “The project will have an overall positive environmental impact and will help address climate change — one of the biggest threats to seabird species in Scotland,” he told me.

The RSPB says compromises with the industry are possible. The problem is that the research to find places for wind farms that are safe for birds has not been done. When correctly sited, research indicates, offshore wind farms need not damage wildlife. Han Lindeboom of Wageningen University has found that the first Dutch offshore wind farm, completed in 2007, showed no damage to life on the seabed between the turbine foundations. Some fish and porpoises even congregated among the turbines, finding shelter where fishing boats and most other shipping is banned.

But birds and rotating turbine blades are not an easy match, especially when large turbine farms block access to places full of food. Off Denmark, sea ducks have all but disappeared from the vicinity of one wind farm. Plans to extend the London Array were abandoned last year amid concerns that such an expansion would threaten red-throated divers, Arctic birds that spend the winter in the Thames estuary.

Back at the Bass Rock, our guide pointed out the remains of a medieval monastery and a prison that once led to the rock being dubbed “Scotland’s Alcatraz,” as well as the still-functioning lighthouse. But the gannets are the only inhabitants now. They have reached record numbers in recent years and are a riveting spectacle both from tourist boats and on images provided by island webcams operated by visitors at the Seabird Centre.

After years of delays and legal battles, several offshore wind projects seem poised to be launched off the U.S. East Coast. But the lack of stable government incentives and tax credits may continue to hobble an industry that already has a strong foothold in Europe.READ MORE

But can they — and the big colonies of puffins, kittiwakes, and other seabirds on neighboring volcanic islands — survive the arrival of a fleet of giant wind turbines on feeding grounds as few as 20 kilometers away?

Ewan Wakefield at the University of Glasgow, who has carried out satellite tracking of the foraging ranges of the Bass Rock gannets, says that “a good proportion of them pass through the wind farm area when they go to feed. And they forage at turbine height.” Sarah Wanless, of the U.K. government’s Centre for Ecology and Hydrology at nearby Penicuik, says the four wind farms “could effectively block two-thirds of [the gannets’] access to the open sea.”

The birds could prove smart enough to avoid collisions and find food elsewhere. Some already forage for food as far away as Norway. But long-distance travel may leave them less able to raise their chicks. “In the worst case, the very viability of the Bass Rock as a gannet colony could be under threat,” says Brock. “Major decisions are being taken without reliable projections of the impacts.”

But Europe is set on harvesting the North Sea winds for low-carbon energy, to help create a stable climate where gannets as much as anything else can thrive. With the stakes so high, will a seabird colony end up as collateral damage?