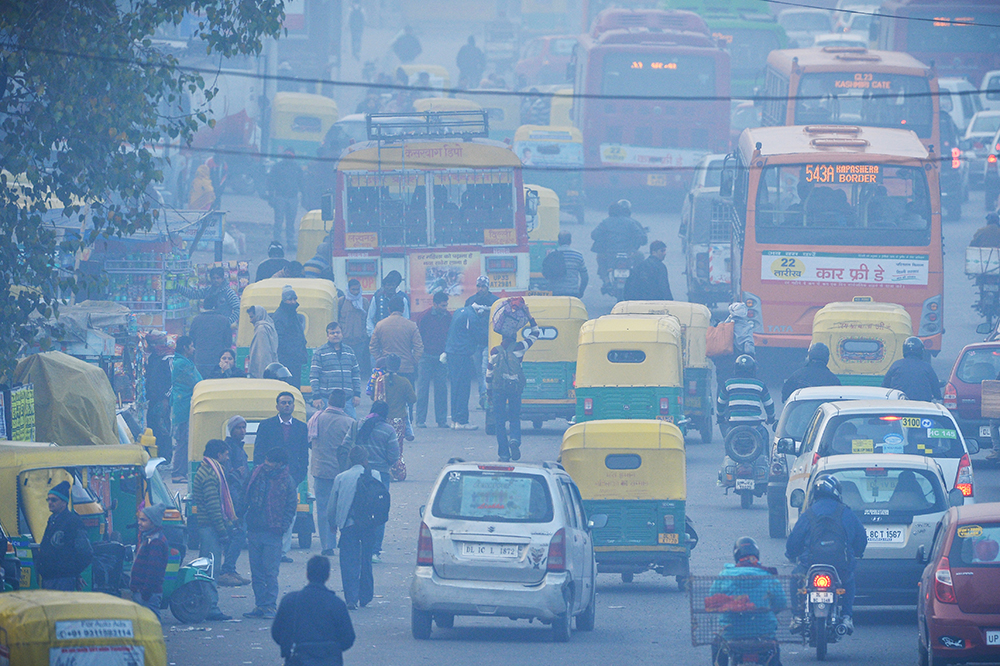 For the second time this year, New Delhi is attempting to unclog its choked roads by keeping half the city’s cars off the streets on weekdays based on whether their license plates end in an odd or even number. But the current two-week experiment has not gone well. Many drivers, reluctant to ride non-air-conditioned buses in the intense heat, have ignored the odd-even directive. And traffic jams created by breakdowns of decrepit public buses have counteracted the benefits of pulling cars off the roads.

A similar experiment in January, initiated by New Delhi’s progressive chief minister, went somewhat more smoothly. But because public buses are crowded and unreliable, many commuters opted for mini-taxis or hopped on their old polluting scooters rather than take the bus — limiting the scheme’s impact on air quality and congestion.

This faltering odd-even experiment has driven home a sobering truth to middle-class commuters and public officials in India: Even in the country’s capital city, with its shiny new subway, the public transportation system is a shambles.

Now, as officials scramble to cope with snarled transportation systems and severely polluted air in India’s megacities, some entrepreneurs in the country’s robust technology sector are stepping in. They are betting that a marriage of smart phone booking apps and private shuttle buses can help close the gap left by the country’s overtaxed transit systems.

Companies like Shuttl, Ola, Cityflo, Zipgo, and others are rapidly building networks of commuters.

In the last few months, a host of startups have emerged that connect commuters to shuttle buses in the same way that “taxi aggregators” like Uber hook people up with independent drivers — and they are starting to show results. Using a business model developed in India, companies like Shuttl, Ola, Cityflo , Zipgo, and others are rapidly building networks of commuters in Bangalore, Delhi, and Mumbai, where they offer private shuttle bus operators the promise of less downtime and riders a comfortable trip to work for a nominal price.

“People do not take public transport right now because the service is really bad,” says Harish Tiwari, co-founder of one of the startups, Tranzo, which operates in Bangalore. “If an app-based aggregator can provide better service than what is there now, people are ready to use it.”

After initially showing little interest in the new app-driven bus service, the New Delhi government announced last week that it was backing the concept and called on companies with fleets of 50 buses or more to apply for an operating license. While the new shuttle bus services often just take passengers on two- to three-mile rides to subway stops, the government wants the services to start operating longer routes and carrying more passengers.

How far the new bus-aggregator apps will go in easing traffic congestion and reducing air pollution in major Indian cities remains to be seen. But should the services catch on in India, they could serve as a model for similar services in other highly congested and polluted cities in the developing world, from Bangkok to Tehran to Mexico City.

The bus aggregator apps work much like Uber or Lyft. When a user taps the icon and types in his or her destination, the phone’s GPS locates the nearest pickup point and time, providing details about the stops along the route and allowing passengers to book a seat using funds uploaded to their account. Some buses offer perks like free Wi-Fi and doorstep pickup, and unlike most public buses they are air-conditioned — vital in cities where temperatures exceed 100 degrees F much of the year. 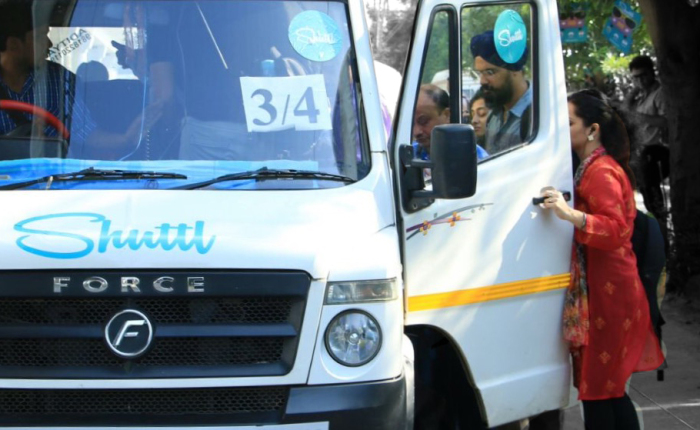 But because overcrowding and long waiting times are the main reasons commuters are deserting public buses, the guaranteed seat and fixed schedule are the real draws.

A major impetus behind New Delhi’s efforts to improve its transit systems, both public and private, is choking air pollution. While Beijing’s smog has generated more headlines, New Delhi now has the world’s deadliest air, and other Indian cities account for 13 of the 20 most polluted on earth, according to the World Health Organization. In all those cities, the amounts of sub-2.5-micron particulate matter (PM2.5) suspended in the air are more than four times the level that U.S. experts deem safe. Many of India’s buses are ancient, and even Delhi’s new ones that run on compressed natural gas produce high levels of nitric oxide pollution.

The worsening pollution is linked, in part, to the rapid growth of vehicles on city streets. From 2000 to 2015, the number of motor vehicles of all types in New Delhi nearly tripled to 8.8 million. Nationwide, the number of private vehicles increased from 59 million in 2002 to 159.5 million in 2013. Thanks to earlier subsidies on diesel fuel — which generates more small particulate matter than gasoline — the market share of diesel cars also leapt from 25 percent in 2002 to 50 percent in 2012.

As the number of private vehicles zooms upward, the number of Indian bus riders is declining or remaining stagnant. Though Delhi’s population continues to rise, the number of daily bus riders fell to 3.5 million passengers in 2015, from 4.3 million the year before. Mumbai bus ridership fell to a new daily low of 2.8 million riders in 2015, compared with around 4 million in 2012.

One of the main reasons India’s commuters are abandoning buses as soon as they can afford a motorcycle or scooter is that the nation’s cities have fallen drastically behind in upgrading and expanding their bus fleets.

The Delhi Metro is overcrowded and offers only a partial solution to the city’s traffic congestion and pollution.

Infrequent service, as well as a poor choice of routes and overcrowding, spelled the demise of New Delhi’s promising Bus Rapid Transit system, which is finally being dismantled after several years of allowing cars and motorcycles to use what was supposed to be a dedicated bus lane.

The government-run Delhi Transport Corporation (DTC) says the financially strapped city needs 16,000 buses, yet is running only 4,700. Waiting times can stretch to more than an hour. Boarding a public bus is a battle: Drivers often simply slow down, rather than stop, and passengers jump on the running board and scramble inside like basketball players fighting for a rebound. Women complain that once inside, they are frequently groped in the packed aisles.

The Delhi Metro, which opened its first 5-mile line in 2002, now boasts a 125-mile network and carries more than 2.5 million passengers a day. But it, too, is overcrowded and offers only a partial solution to the city’s traffic congestion and pollution.

All this has created an opening for the app-driven bus aggregators.

Because the aggregators mostly work with private shuttle operators that are already in business, capital costs are low for expanding the network. For the shuttle operators, the hook is higher profits. Currently, most such companies only run two trips per day because their only source of riders is contracts with corporate clients to ferry their employees to and from work.

By committing to commute with the app every day, riders can actually travel for less than on public transit.

But with the Uber-style apps, aggregators believe they can increase the number of trips by three times — boosting bus productivity from an average 30 miles a day to 90.

According to the co-founder of Mumbai-based CityFlo, Jerin Venad, that quickly translates into higher margins. A typical contract bus company incurs about $1,000 in costs to operate a 35- to 40-mile morning-and-evening route, he says. But that operating cost only increases to $1,200 for running 75 to 100 miles throughout the day, while revenue increases threefold. Meanwhile, customers benefit, too. By committing to commute with the app every day, riders can actually travel for less than on public transit.

Currently, no good data exists on whether the apps are primarily converting car and motorcycle commuters into users or cannibalizing riders from the public transit system. But startup founders say the anecdotal evidence is encouraging.

“We have done a basic analysis of where our passengers are coming in from,” said Venad, citing an internal survey of 7,000 customers. “A major chunk of our customers were previously driving to work and another major chunk were sharing cars or taking cabs.”

Amit Singh, co-founder of Shuttl, agrees. Roughly a year old, Shuttl already carries about 20,000 passengers a day with its fleet of 500 buses and has completed a million rides. If only a quarter of those riders would otherwise drive themselves, that’s 5,000 cars off the roads.

Other firms are also beginning to show results. Younger companies like Tranzo and CityFlo have joined with private bus operators to bring 700 to 1,500 buses into their systems. 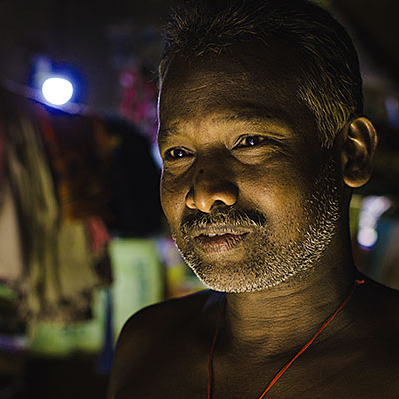 As India looks to bring electricity to the quarter of its population still without it, nonprofit groups are increasingly turning to solar microgrids to provide power to the nation’s villages. But the initiatives so far have faced major challenges. READ MORE

And Ola — a local competitor to Uber, with more than 350,000 taxis on its platform and a billion dollars in funding — launched a shuttle service last September that now covers eight cities, including Delhi.

“As we solve the home-to-office commute, we will be making everything else redundant,” he said.