I am back ashore after an unusual expedition that brought scientists and artists to witness and respond to beach trash on the shores of southern Alaska. I have good and bad news.

The expedition was called GYRE, partly because much of the trash spins out of the North Pacific Ocean gyre, and partly because of the trip’s message: what goes around comes around. The trip was conceived by the Alaska SeaLife Center and Anchorage Museum, with National Geographic and the Smithsonian involved. A resulting traveling museum exhibit will premier in Anchorage in February and then, like ocean trash, spend a few years traveling around. 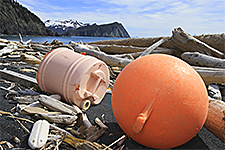 Much of the trash scattered on Gore Point Beach and elsewhere in Alaska is plastic. KIP EVANS/GYRE

So what shall we take first, the good news or the bad? Actually, almost everything I saw was a bit of both, so let me share impressions. We traveled from Seward in southern Alaska and headed southwest for about 300 miles, with stops, to the shores at Gore Point on the Kenai Peninsula, Wonder Bay on Afognak Island, Blue Fox Bay on Shuyak Island, and Hallo Bay at Katmai National Park.

We met concerned citizens — paid and volunteer — who collect and catalog trash on some of the more accessible beaches (a very relative term in a roadless region where every beach requires a boat or an airlift). At Katmai’s Hallo Bay, rangers had worked for a week to pile and bag stuff that doesn’t belong on a beach or in a national park; we hauled four tons of trash from a four-mile beach.

That’s a lot, and on some of the coast there certainly is a lot of trash. On most of the coast, though, there’s little. Vertical, rocky, high-energy shorelines make up most of the region’s crenellated coastlines. Most of what washes up there in fine weather washes away in savage winter storms. It then funnels to quieter, protected beaches — most of which are crescents of sand at the heads of bays between headlands — and there, yes, it collects. That’s where you’ll find your trash, so those are the places we landed on.

Almost all problematic beach-trash is plastic. Plastic’s signature rot-less inertness makes it last many years. And so, it’s used for many things, including fishing nets. On beaches we visited, fishing gear made up a lot of the trash. When I walk the beaches of the U.S. East Coast, I find a lot of toy soldiers, action figures, and balloons. Noticeably, by comparison, Alaska trash is adult, working trash. Yes, we found soft-drink and plastic bottles (how could we not?). But a lot of it was fishing net floats, fishing nets — old driftnets and new trawl nets — buoys, ship bumpers, and dock lines. There were also cargo nets and products that had spilled from shipping containers washed from freighters in storms.

If trash washes up on a beach so remote that no one is there to see it, does it make a mess?

How could we tell what came from shipping containers? Because we found fly swatters with the logo of one specific sports team, and hummingbird feeders, on each beach we visited. The fly swatters were everywhere. We also found consumer product containers — soap bottles, for instance — with various Asian and English writing.

Several people arranged to meet us to show-and-tell of their efforts to catalog and remove washed-up junk. Expedition member and California-based educator Kate Schafer observed that the people we met were all outraged, yet none was defeated. I liked that characterization.

But their effort is nothing if not Sisyphean. Trash comes off; more trash washes in. No end in sight. This is how it will be as far into the future as we can see. Unless we look past our worn-out noses and…

But before we talk about solutions, let’s consider a serious question: if trash washes up on a beach so remote that no one is there to see it, does it make a mess? 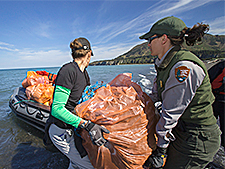 This is not a deserted place. This is the last best megalopolis of life for hundreds of species of bird, fishes, and mammals long since driven from their strongholds farther south by human crowding and destruction of their living places. Alaska has the largest remaining salmon runs in the nation, but a hundred years ago, the world’s largest salmon runs came and went from the rivers of Oregon and Washington, especially the Columbia River, before it was dammed to the damnation of it native inhabitants, both human and fish. Grizzly bears, now more abundant in Alaska than anywhere in the world, were once commonly encountered out on the Great Plains (where Lewis and Clark confronted, shot, then wrote of them). Those open-country bears must have fed well on buffalo until white people decided to starve the Native people to near-extermination.

How we treat our lands and other living inhabitants reflects how we treat other peoples and how we treat one another. That’s why trash, even on a “remote” beach, insults our dignity and sullies our humanity.

The national park from which we removed one ton of trash per mile is frequently visited by tourists, who don’t want to hire planes and guides only to find garbage. In this not-remote place, plastic causes harm and suffering. Before it gets ashore, it causes harm and suffering to seals, turtles, fishes, and seabirds who die from tangling in it and from the consequences of eating it and who feed it to their young. I’ve seen all of these creatures in trouble with trash.

Clearly, plastic is a problem. One of its main features is that it greatly resists getting metabolized by bacteria or chemically degraded. It doesn’t go away. It just gets smaller. Animals eat it, and even at the scale of molecules, it’s still plastic. Plastic polymers have been found circulating in the blood of mussels. Some plastics are non-toxic; some have toxic additives like lead and metals. We found both of those additives in some (though not all) of the samples we tested.

The price of plastic reflects the fact that the sellers privatize profits and socialize the costs.

Even the tons of plastic we took were destined to be piled ashore in a landfill, though much of it could have been reused or recycled. We just moved it. That’s what the market bears. It’s too cheap to recycle because the makers and sellers don’t pay the costs of disposal. As with many “cheap” things, the price reflects only the fact that the sellers privatize their profits and socialize the costs. Many things priced cheap are really rather costly.

And people who do actually know where it goes, don’t know where it comes from. It’s been 30 years since I heard about the first organized beach cleanups, and I’m getting tired of hearing the experts explain how we don’t know where these nets come from or can’t tell how these bottles get into the ocean. 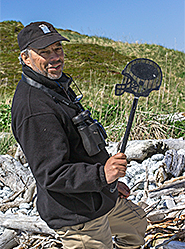 Author Carl Safina holds a fly swatter that appeared to be debris from a shipping container. KIP EVANS/GYRE

It’s time for environmentalists to stop simply categorizing the human-made debris. We need to start understanding how and where it gets into the ocean. The U.S. government has observers on fishing boats to monitor catches; why isn’t there a question on the form asking captains how many nets they’ve lost in the last year? Why not a survey asking if they’ve ever dumped an old net because on-land disposal is too expensive? Why no adequate sampling and surveying of rivers for plastic outflow rates, no adequate dialogue with shipping companies to understand rates of container loss?

I’d rather not land on another beach where a person with a clipboard is counting how many bottles have Chinese lettering, unless that person has a colleague studying whether those bottles come from rivers or fishing boats, and what can be done about it.

Why is there no initiative to pay for old nets, rather than charge for their disposal? And why is there no legislation requiring a refundable deposit for new nets?

Cataloging and removing trash is important, but some of the effort must now be peeled off the beach and applied farther up the trash stream. After all, we want this to stop, right? The only way to do that is to understand how it gets into the ocean to begin with.

The proper posture for addressing this problem starts with our personal choices in stores and community recycling. But that isn’t the solution. The solution lies in developing a new generation of materials whose lifetime trajectory is scaled to their use, whose fate in nature is appropriately timed to their function.

I would not want a fiberglass boat that dissolves in seawater in under 50 years; but I would indeed want yogurt to come in a container that isn’t for all practical purposes eternal. Products with a two-week shelf life would be well-served in containers that take just a few months to rot in seawater and sunlight and release nutrients to bacteria.

Some people believe they “know” that the Pacific Garbage Patch is a mat of trash the size of Texas that’s so thick you can walk across it. In truth, there’s no such mat. There’s a very large area in the north Pacific where an accumulating array of trash is slowly whirling. It’s enough to kill sea turtles, and albatrosses eat enough of it that I’ve seen them on distant places like Midway Atoll and Laysan Island, dead, their innards packed with toothbrushes and cigarette lighters. But in most of the ocean the garbage is too sparse for a person to notice unless you’re really paying attention. Yet even that thin soup, clearly, is far too much for the health of the wild inhabitants.

On our Alaska trip, we saw plastic trash on each landing. But between landings, in the company of whales and seabirds, we saw many rugged shores seemingly devoid of debris, and we observed not one floating human-made object.

What we did see, in the greatest remaining remote wilderness of the United States, is that, as Nick Mallos of the Ocean Conservancy noted, “These shores are not untouched; now the challenge is, how can we keep them unspoiled?”

Correction, July 2, 2013: Earlier versions of this article incorrectly identified the location of Gore Point. It is on the Kenai Peninsula, not in the Pye Islands.