If you were to fly over the great continental expanse of China at night, you would find clusters of bright lights hugging near the eastern coast — sprawling, populous cities such as Beijing, Tianjin, Shanghai, Guangzhou, and Shenzhen. But the farthest west you travel, the fewer such illuminated megalopolises you would encounter. To be sure, China also has large cities in its interior, but they are fewer and farther between. Rather like the United States, China’s major centers of population and industry are concentrated near its eastern seaboard. So, too, are its energy needs.

Yet ironically, China’s great and untapped opportunities for developing both traditional fossil fuels and alternative energy lie primarily in its western hinterlands. For instance, the sparsely populated, sun-drenched northwestern province of Gansu is fast becoming a hub of China’s efforts to develop domestic wind and solar energy. Likewise, as eastern coal reserves are gradually depleted, new mining operations are under development in the western provinces of Inner Mongolia, Qinghai, Ningxia, Xinjiang, Shanxi, Shaanxi, and Gansu. But they also lie far from where most of the energy will eventually be consumed — and that’s the rub.

Transporting coal from western mines over long distances — via railroad or truck, or by barges drifting down the Yangtze River — is a costly, troublesome undertaking; freight charges can add more than 50 percent to

The environmental impacts of carrying out these energy plans have not yet been fully considered.

the cost of coal. In adverse weather conditions, shipment becomes a precarious obstacle. When a 2008 blizzard blanketed southeastern China in snow and shut down major rail lines, the lights went off in several southeastern cities to which coal shipments were delayed. When last summer’s severe drought grounded barge traffic on the lower Yangtze, the largest utility company in downstream Shanghai announced that nearby factories would face rotating blackouts (despite its sheen of modernity, even mainland China’s wealthiest city is not immune to power failure).

The country’s top leaders have made provisions for both increasing overall coal production and easing the coal-transportation bottleneck. The most recent Five-Year Plan, the central government’s primary planning document, calls for significantly increasing coal production, which will be achieved by developing and expanding 14 large “coal-industry bases” across western China; these bases will include facilities for coal mining, petrochemical processing, and coal-fired power plants.

Moreover, the plans call for installing high-voltage, cross-country transmission lines. Instead of shipping all that coal in rumbling rail cars, at least a portion of it would be converted to power on site, and the electricity then transmitted by cable to power-hungry eastern cities like Shanghai. But the environmental impacts of carrying out these plans have not yet been fully considered. 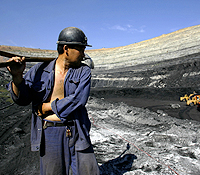 China Photos/Getty Images
A coal miner in an open pit mine in Inner Mongolia.
In China today, fully 80 percent of electricity is generated from coal. Yes, it’s true that the contribution from renewable sources is also increasing — you’ve perhaps seen photos of glistening new wind turbines in China’s deserts — but green energy isn’t currently displacing fossil fuel sources; it’s supplementing them. Both are growing rapidly. Between 2000 and 2010, China’s total coal consumption increased threefold, according to estimates from the U.S. Energy Administration. China’s coal-dependency isn’t going away anytime soon — quite the reverse.

Yet, in expanding coal-industry bases in west China, one crucial challenge has so far received far less attention than it deserves: Coal-based industries are massively water-intensive (in fact, coal mining, coal-based power generation, and petrochemical processing together account for more than one-fifth of China’s total water usage). And much of western China is already short on water — think Gobi desert and camels, as opposed to Pearl River Delta rice paddies. “The west of China is an environmentally fragile area,” says Professor Wang Xiujun, who conducts research on climate and precipitation jointly for the Xinjiang Institute of Ecology and Geography and the University of Maryland. “There’s not much water to spare.”

When new industry comes to town, water is secured by tapping local lakes and rivers, pumping groundwater, and constructing reservoirs to capture rainwater, which diverts its normal flow and reabsorption into the soil. All three have unintended environmental consequences, says Sun Qingwei, climate and energy campaigner for Greenpeace China and a former government scientist based in western Gansu province.

“There is not enough water to support a lot of industry and coal operations in western China,” Sun says. “If water resources are exploited by the coal industry, that will lead to land degradation and desertification. And the livelihood of the local communities is damaged.” Greenpeace China, which takes a research-based approach to its work (in contrast to the organization’s

What is becoming apparent, in China and elsewhere, is that energy and water must be planned for together.

penchant for protest in other countries), is currently working on a report to map the availability of water in west China against the anticipated usage of new coal industry.

A glimpse of what the future may bring can be seen in Inner Mongolia — the region’s vast grasslands are gradually becoming a dust bowl. Over the last decade, as new coal mines, petrochemical plants, and coal-fired power stations have been built, local rivers have been dammed and multiple wells dug. As a result, the water table has sunk, and grasslands such as Xilingol have turned unproductive. The Wulagai Wetland has all but dried up.

“The coal industry has changed the environment because it uses the underground water,” says Da Lintai, a researcher at Inner Mongolian University. A changing climate, he adds, has likely also contributed to desertification in Inner Mongolia. The result is that “it is more difficult now for the herdsmen to find areas with sufficient water sources. And the lack of water also influences the growth of the grass to feed their animals.”

Last May, a coal truck slammed into and killed a herder near Xilinhot, Inner Mongolia. The protests that flared up after the incident were widely reported as an instance of ethnic unrest, because the herder belonged to the Mongolian minority group, and the driver was Han Chinese. But locals say the root of anger was less about ethnic differences than the fact that coal trucks have become a hated symbol of the arrival of an industry that has destroyed local livelihoods.

With 20 percent of the world’s population but just 7 percent of its available freshwater, China faces serious water shortages as its economy booms and urbanization increases. The government is planning massive water diversion projects, but, as Christina Larson reports, environmentalists say conservation — especially in the wasteful agricultural sector — is the key.
READ MORE
To be sure, planners elsewhere in China are making efforts to conserve water. In Ningxia in northwest China, for instance, a large coal-fired power station that opened in 2010 was designed to use one-fifth the water of traditional coal-fired plants, according to an investment stock statement obtained by the US-based NGO Circle of Blue. This seems an encouraging example of foresight. However, higher installation costs and energy-usage of such air-cooled power plants may prove a hurdle to widespread adoption.

What is gradually becoming apparent — in China, as elsewhere — is that energy and water must be planned for together. Speaking recently at the Beijing offices of the Nature Conservancy, Jennifer Turner, director of the Woodrow Wilson Center’s China Environment Forum, called this connection the “water-energy nexus.” The imperative to conserve water in China is especially urgent now because, as she added, “with climate change, China is already losing water every year.”