During the 872-day German siege of Leningrad in World War II, in which an estimated 1.1 million civilians died, a small band of workers devoted themselves to safeguarding a priceless trove of 200,000 seeds at the Institute of Plant Industry. Then the world’s largest seed bank, the collection had been amassed, in large part, by famed Soviet botanist Nikolai Vavilov during expeditions to 64 countries.

As the siege wore on and starvation became epidemic, workers at the institute refused to eat the seeds and protected them from hungry citizens. Nine of Vavilov’s seed bank colleagues ultimately died from starvation. 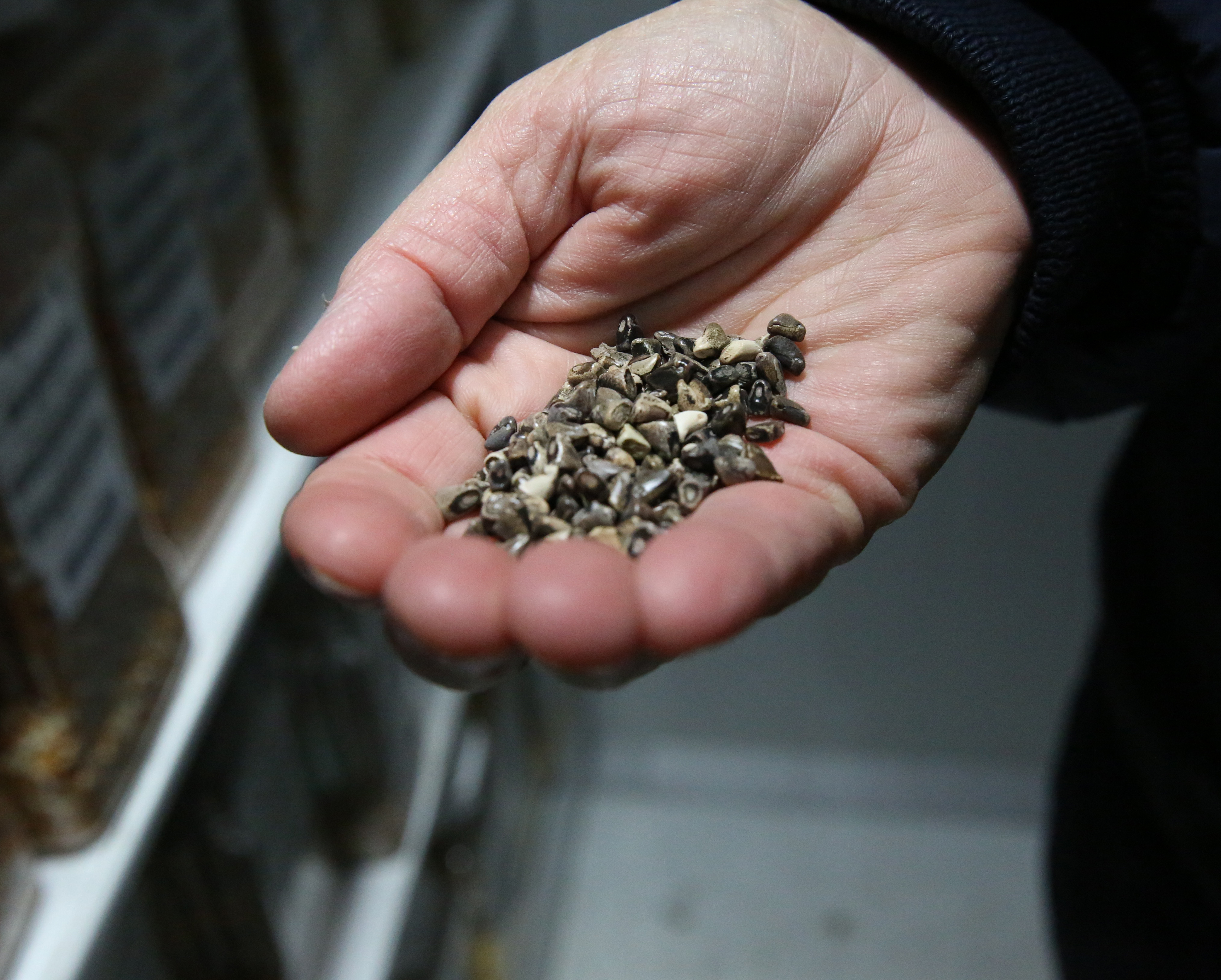 Seeds stored at a gene bank in Mexico. GCDT

Seventy years later, in 2012, employees of a gene bank at the International Center for Agricultural Research in the Dry Areas in Syria (ICARDA), heroically duplicated irreplaceable wheat, barley, and lentil seeds and spirited them out of the battle-scarred country to the frozen Svalbard Seed Vault, located inside a Norwegian mountain. Last year, the vault was opened for the first time to retrieve those seeds in order to re-establish ICARDA’s gene banks in Lebanon and Morocco.

From war, to civil strife, to natural disasters, seed banks around the world face crises that, with surprising regularity, befall these genetic repositories that are the lifeblood of the international agricultural community. With 9 billion people to feed by 2050 and with crops facing increased stress from rising temperatures and drought, plant breeders must marshal all of the available crop diversity to continuously develop new varieties of wheat, maize, rice, and other foods. The arrival of a new pest threat, for example, will inevitably send agronomists searching through gene bank collections for pest-resistant seeds — often, only a handful of seeds may have the needed trait.

“When talking about genetic resources, we must consolidate this concept of interdependency, that resources available in one part of the world may be critical in another area,” says Mauricio Lopes, President of the Brazilian Agricultural Research Corporation (Embrapa).

Protecting crop diversity and making sure the genetic heritage preserved in seed banks is shared among nations are cornerstones of global food security. But once seeds are secured in gene banks, it is a never-ending — and expensive— job to keep them viable: Re-building the ICARDA gene bank will cost $2 million, with an additional $500,000 needed annually for the next few years to regenerate the seed.

A major international effort is now gaining momentum to pay for safeguarding the world’s important seed stocks. Last week, the Global Crop Diversity Trust, the German-based organization created in 2004 to ensure the long-term conservation of crop diversity, announced it had amassed pledges totaling $300 million from 14 nations, as well as from the private sector, non-profit organizations, and financial institutions.

Over time seeds — even frozen ones — experience a deterioration of their genetic quality.

That figure represents a doubling of funds over the last two years, yet is still less than half of the $850 million endowment goal needed to protect 1.5 million critical seed populations. Among those collections, held in 14 major international gene banks, are thousands of varieties of seed used to grow 17 major world crops.

“There is a great urgency to safeguard crop diversity,” says Marie Haga, executive director of the Global Crop Diversity Trust, who notes that diversity is lost every day, both in the field as well as in many of the world’s plant gene banks. When money is tight, critical tasks fall by the wayside. Perhaps the most important is to periodically plant seeds and harvest new ones from those growths, given that over time seeds — even frozen ones — experience a deterioration of their genetic quality.

“Regenerating seeds [to keep them viable] is the biggest cost to gene banks — and it’s often the first activity that gets cut,” says Luigi Guarino, the trust’s director of science and programs.

The so-called “Doomsday Vault” in Svalbard, Norway — whose sole purpose is to provide duplicate seeds in the event of a global catastrophe — has received a great deal of attention. But it is the network of 1,700 workhorse gene banks worldwide, including Vavilov’s Institute and ICARDA, that actually maintain the flow of seeds used by plant breeders to develop new crop varieties. 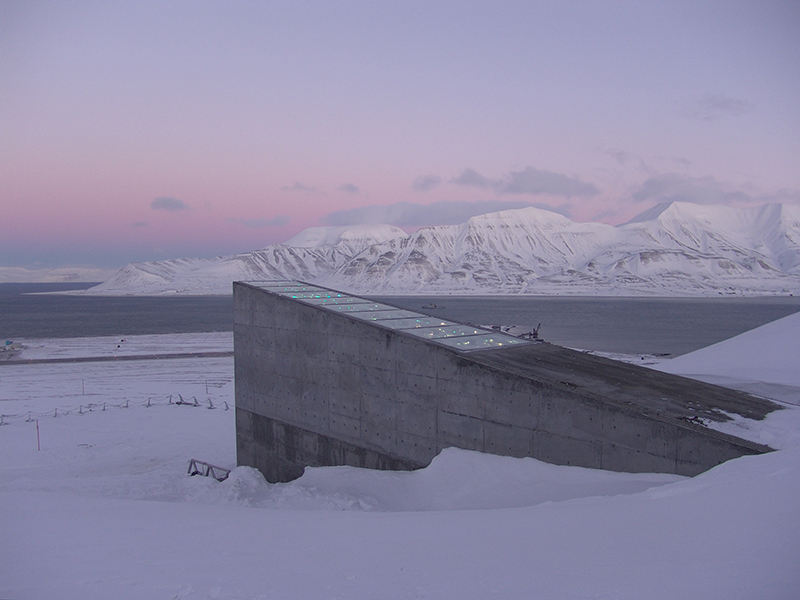 The Global Crop Diversity Trust’s endowment is a fundamental step towards realizing a robust global seed conservation and exchange system envisioned by the International Treaty on Plant Genetic Resources for Food and Agriculture (Plant Treaty). The Plant Treaty, which governs the exchange of 64 vital crops — including varieties of wheat, rice, and maize — among countries, entered into force in 2004. The endowment’s biggest contributors are Norway, Germany, and United States, which hasn’t yet ratified the Plant Treaty.

While the need for seed conservation is indisputable, seed exchange has become increasingly complicated and political — for good reason. For decades, companies developing pharmaceuticals, cosmetics, or agricultural seed profited from the biodiversity and traditional knowledge of other nations, often doing little to share those revenues. Developing nations, in particular, felt that foreign businessmen and multinational companies were plundering the botanical heritage of poorer countries and giving little in return.

Egregious examples of biopiracy helped stoke the bitter politics. Take the so-called enola bean. Larry Proctor, owner of a small seed company, traveled to Mexico, purchased a pack of yellow beans, and planted them on his Colorado farm. In 1999, he was granted an exclusive U.S monopoly patent for what he called the “enola” bean, which gave him the right to sue Mexican companies exporting yellow beans to the U.S. and to charge royalties on imports of the Mexican beans.

No country relies solely on its native botanical diversity to feed its citizens.

To rectify inequities such as these, multiple international agreements were negotiated to govern access to, and commercialization of, plant genetic resources.

Of those, the Plant Treaty acknowledged that crops, especially food staples, merit special consideration, notably streamlined access to seed collections among countries. No country relies solely on its native botanical diversity to feed its citizens. If so, U.S. citizens would largely eat berries, grapes, and pumpkin. A study last year documented that, on average, countries lack native genetic diversity for roughly 69 percent of the crops they produce — a finding that underscores how dependent every nation is on foreign crops.

In addition to the creation of the Global Crop Diversity Trust to oversee gene banks, the Plant Treaty also established a benefit-sharing fund, requiring companies and countries using banked seeds to contribute money— if they both commercialize the seeds and restrict research access to them. Those monies will support farmers’ efforts to conserve biodiversity in the field. 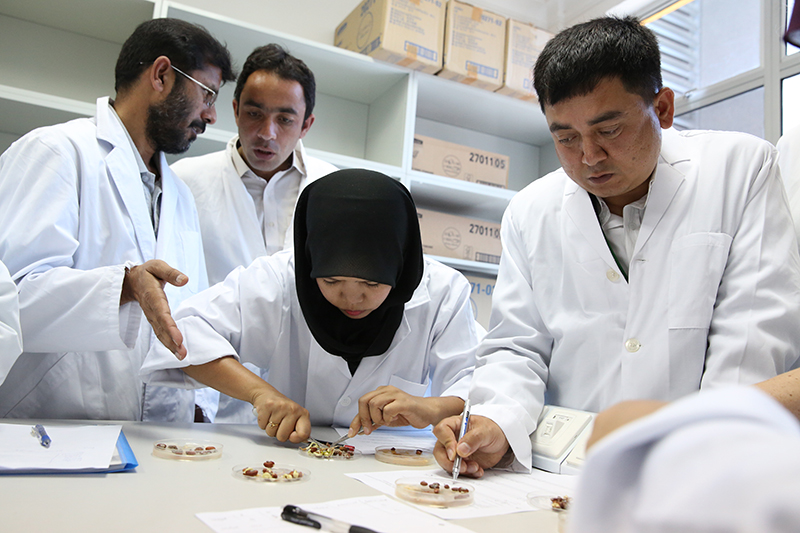 Researchers from various nations study seeds at a workshop in Malaysia. GCDT

But the fund has so far secured only $22 million, almost entirely from voluntary national donations and far shy of its $116 million goal.

Still, Plant Treaty parties and industry are working on how best to get money flowing into the benefit-sharing fund. Those negotiations center on when and for how long commercialization fees must be paid. “It’s a good treaty and well meaning: We have to make it function better,” says Bradley Kurtz, senior manager of crop diversity and intellectual property at DuPont-Pioneer in Des Moines, Iowa, which has contributed to the endowment fund.

According to Lopes, of the Brazilian Agricultural Research Corporation, the Global Crop Diversity Trust, and other initiatives have helped overcome the biggest challenge — getting countries to understand the importance of these seeds.

Maintaining seed conservation and exchange between countries is especially critical in the face of climate change and the looming need for “climate-smart” crops to feed a burgeoning global population. Russia’s renamed N. I. Vavilov Institute of Plant Genetic Resources may play a role in helping develop new strains of more heat- and drought-resistant crops. Recently, Lee Hickey and Adnan Riaz, crop geneticists at the University of Queensland, discovered unique drought-tolerant and disease-resistant traits in 300 old varieties of wheat seeds stored at the institute.

If the world is to have another Green Revolution to feed its soaring population, it must be far more sustainable than the first one. That means finding ways to boost yields with less fertilizer and rethinking the way food is distributed. READ MORE

The Global Crop Diversity Trust has also announced a project to protect diversity of coffee — a crop known for its climate sensitivity— which could serve as a model for future industry-focused endeavors. In addition, several biodiversity-rich developing nations — including Brazil, Ethiopia, and Chile — have signed new collaborative agreements with the trust, moves that suggest a new spirit of partnership on seed conservation despite past divisions that have dogged international seed-sharing negotiations.

“It’s not all about money,” says Haga. “It’s about creating a global system of cooperation among a diverse array of countries.”

Funding constraints, however, hinder the ability of gene banks to provide information on seeds, limiting their usefulness to plant breeders.

If breeders don’t have information on seed traits or genes of interest, they have little incentive to use banked seed. To that end, the Global Crop Diversity Trust separately funds efforts to uncover hidden genetic traits in banked seed and share that information.

At the gene banks, the chief mission is survival. Seeds of farmer-adapted local varieties sit beside modern, off-patent hybrids. Any one of them could contain a trait that could protect against devastating droughts or crop pests.

“Crop diversity isn’t just for the rich or the poor,” says Cary Fowler, former executive director of the Global Crop Diversity Trust. “Having both developed and developing countries participating together would send a powerful message of commitment and hope.”