As scientists, we are used to having our work questioned.

Anyone who has ever attended a scientific meeting knows that scientists are hardest on themselves. When we present a new research paper at a conference, colleagues often interrupt us with sharp, pointed questions. Those questions are asked in good faith, in an attempt to make our work better and advance scientific knowledge.

But scientists who work on climate change are increasingly finding our work questioned by politicians and ideologues who simply don’t like our findings. Too often, politicians start with their conclusion, then work backwards to find the evidence — any evidence, regardless of its quality — to back up their preferred policy positions. And the fossil fuel industry is happy to fund those who attack our work, because our research has pointed to the burning of their products — oil, coal, and natural gas — as the primary drivers of climate change.

For more than a decade, I’ve found myself targeted and attacked by political interests who feel threatened by some facts my colleagues and I uncovered

The findings that made us targets have only been further validated as the world continues to warm.

about our changing climate. We have received menacing e-mails, including anonymous death threats. I’ve received a package containing an Anthrax-like white powder (the FBI determined that it was a hoax), and someone threw a dead rat on the doorstep of another colleague. As the political conversation around climate change has become more polarized, the attacks have intensified.

Now, however, my colleagues and I are fighting back, a task that is made easier because the findings that have made us the targets of climate change deniers have only been further validated as CO2 levels continue to rise and the world continues to warm. This is also true when it comes to the research behind the so-called “hockey stick” graph, which is what first prompted attacks on me and my colleagues.

That graph, unveiled in a 1998 paper, showed global temperatures level or decreasing for 1,000 years (the shaft of the stick) and then spiking upward in the past century (the upturned blade.) Those rapidly rising temperatures tracked increases in atmospheric levels of carbon dioxide, which coincided with the world’s growing use of fossil fuels.

For better and worse, our graph became an icon of climate change because it was relatively easy to understand. That made it a threat to opponents of dealing with global warming, who invested significant time and resources attacking our research. At first, my colleagues and I responded as we would to any scientific question. We evaluated the claims about our data and methods and responded in the scientific literature. But instead of questioning our claims in good faith, our critics approached the hockey stick like a politician approaches a piece of legislation he or she doesn’t like. Their goal was to dismantle our findings, regardless of the facts. By 2005, U.S. Rep. Joe Barton (R-Texas), one of the biggest recipients of fossil fuel funding in the House of Representatives, sent my colleagues and me letters demanding that we open our professional and personal lives to an investigation from his committee.

These attacks obscure the bigger picture. Climate science is like a vast puzzle. Individual papers like ours are a single piece of that puzzle. Scientists are still filling in pieces the puzzle, but we can see a relatively complete picture of our climate that tells us the Earth is warming, human activity is the cause, and

that we are locking in substantial rises in sea level, increasingly intense heat waves and floods, and threats to global fresh water and food resources as we continue to burn fossil fuels.

But politicians and ideologues try to make climate science out to be a house of cards. Remove one card and the whole thing falls down. The hockey stick papers, they decided, must be one of those cards and their response was to attack our research and challenge our integrity. I call it the “Serengeti strategy,” in which predators look for what they perceive as the most vulnerable animals in a herd.

In 2005, U.S. Rep. Sherwood Boehlert (R-New York) had the courage to stand up to Joe Barton. Boehlert asked the National Academy of Sciences — an institution created by Abraham Lincoln to advise the government on scientific matters — to evaluate the “hockey stick” and related studies. The academy found our conclusions to be valid and appropriately understood them to be one piece of the puzzle. In fact, dozens of “hockey stick” studies using different data and methods have verified and extended our original findings in the past several years.

Barton took a different tack. He commissioned a statistician from George Mason University to produce a report for his committee to misrepresent our research. When the National Academy of Sciences issued its report, which validated our findings, fossil fuel industry allies in Congress like Sen. James Inhofe (R-Oklahoma) falsely claimed that the report disproved our research. Inhofe has named me and 16 others scientists as people he’d like to investigate if he again gains control of a committee in the Senate. Inhofe has just published a book detailing the “global warming conspiracy” he believes is behind climate science research. As a climate scientist, I can assure everyone that my colleagues and I simply aren’t that organized. 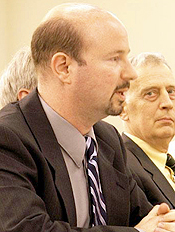 Courtesy of the author
Michael Mann testifies before Congress in 2006.
Like Barton, Virginia Attorney General Ken Cuccinelli issued a subpoena in 2010 demanding personal correspondence from me and dozens of other scientists from my time at the University of Virginia. Thankfully, groups like the Union of Concerned Scientists, the American Association of University Professors, and several free speech organizations urged the university to fight Cuccinelli’s demands, and the university did. Cuccinelli lost his case before the Virginia Supreme Court last month. While we don’t know how much Cuccinelli’s office spent on this witchhunt, the university spent more than $600,000 in private funds defending scientists’ right to privacy.

Inhofe and Cuccinelli both drew their inspiration from an incident in November 2009, when climate scientists had their emails stolen from the University of East Anglia and misrepresented through a coordinated public relations campaign orchestrated by a who’s who of climate denial front groups. Why attack the University of East Anglia? It is one of four major government and academic centers that track global temperatures. Again, the Serengeti strategy at work: no matter that all the data from these four institutions tell us the world is rapidly warming, and that numerous independent investigations later concluded that the scientists whose e-mails had been hacked, including mine, had not engaged in fraud or scientific misconduct.

Despite these attacks, reality is catching up to our national conversation about climate change, and it is becoming harder to deny what the science has been telling us. Since the Intergovernmental Panel on Climate Change

Despite these attacks, reality is catching up to our national conversation about climate change.

(IPCC) reports in 2007, new scientific findings have indicated that global warming is generally worse than we thought. Carbon emissions are higher than the IPCC projected, Arctic sea ice is melting at a faster-than-expected clip, and observed and projected sea levels are increasing. At the same time, advances in climate science have more definitively linked climate change to an increasing likelihood of many types of extreme weather events.

Many local and state governments are prudently preparing for a changing climate and have also adopted policies that can drive down greenhouse gas emissions. But for other vulnerable regions, climate change isn’t on the agenda or is considered verboten for ideological reasons.

The price of politicizing science is high. In addition to the distraction it creates, it exacts a personal toll on scientists, taking time away from our work, our friends, and our families. If it’s any comfort, I’ve told colleagues who’ve faced similar attacks that they should wear it as a badge of honor. But my greatest fear is that it might discourage younger scientists from entering areas of research that vested interests have declared to be “off limits.”

Luckily, scientists are increasingly standing up for themselves. Scott Mandia, a meteorology professor at the State University of New York, was disturbed by the legal battle being waged over scientists’ personal emails in Virginia. He

Widespread, bad-faith assaults on science have no place in a functioning democracy.

kicked off a fundraising effort that led to the creation of a Climate Science Legal Defense Fund, which aims to help scientists foot the significant legal bills that can add up when they are attacked by ideologues. Mandia, along with a John Abraham, a physics professor at the University of St. Thomas in Minnesota, also helped create a Climate Science Rapid Response Team, which connects journalists with scientists.

The Union of Concerned Scientists has redoubled its efforts to defend climate scientists. It organized academics in Virginia to speak out against Cuccinelli’s investigation and has helped scores of scientists improve their ability to communicate with the media and policymakers — skills that simply aren’t part of many scientific educations. Scientific societies like the American Association for the Advancement of Science and the American Geophysical Union are also condemning attacks on their colleagues and helping scientists communicate their work in a difficult media and policy environment.

Widespread, bad-faith assaults on science have no place in a functioning democracy. We should be able to have a national discussion about climate change that is informed by a shared understanding of the scientific facts that generations of researchers have uncovered.

Scientists realize the stakes are high. People are hungry for information about what climate change means in their backyards, and scientists can help ensure that local decision-makers have the information they need to protect their constituents. Of course, more broadly, our “constituents” are our children. The decisions we make today about climate change will go a long way in determining the type of world they inherit from us.

The global challenge of climate change, Stephen Gardiner writes, poses a perfect moral storm — by failing to take action to rein in carbon emissions, the current generation is spreading the costs of its behavior far into the future. Why should people in the future pay to clean up our mess?READ MORE
In the wake of the manufactured East Anglia scandal, I was on vacation with my family in the Florida Keys. My four-year-old daughter was entranced by the mangrove forests, the dolphins, and the coral reefs, with their exotic and colorful fish. I couldn’t bear to tell her that climate change and an increasingly acidic ocean are slowly killing the reefs, that increasingly destructive hurricanes would subject them to further insult, and that projected sea level rise over the next century and beyond could submerge vast regions of the Florida Keys.

What to do about climate change necessarily involves questions about economics, fairness, and policy. But it also involves ethics. We are making decisions today that will impact the world our children and grandchildren inherit. What sort of legacy do we want to leave them?