On a placid bend of the Ohio River in West Virginia sit two coal-fired power plants. The Philip Sporn Plant boasts four boilers from the 1950s, surrounded by mountains of coal and a series of man-made lakes to contain the toxic residue of its coal-burning. A faint haze emanates from its main smokestack, the only visible sign of the thousands of tons of acid-rain-forming sulfur dioxide, smog-forming nitrogen oxides, and climate-warming carbon dioxide it emits each day, a consequence of the plant’s complete lack of pollution-control technologies. The 1,100 megawatts of electricity it produces will never benefit from such controls, as they are too expensive to install on the multiple small boilers, according to the plant’s owner, American Electric Power.

Courtesy of Alstom
The Mountaineer plant in West Virginia is the first power plant in the world to capture and store underground a portion of its CO2 emissions. The Philip Sporn power plant is visible in the distance.

But just beyond Sporn’s waste ponds stands the steaming cooling tower of American Electric’s Mountaineer Power Plant, which burns 12,000 tons of coal a day to produce steam in a single massive boiler and generate up to 1,300 megawatts of electricity. Roiling white water vapor billows out of its 100-story smokestack, a visible sign of the scrubbers and other technology that remove as much as 98 percent of the plant’s sulfur dioxide emissions and 90 percent of its nitrogen oxides.

And to top it off, since October, an oversized chemistry set employs baker’s ammonia (ammonium carbonate) to strip more than 90 percent of the CO2 from a small portion of the Mountaineer plant’s waste gas and turn it into ammonium bicarbonate. Heat and pressure in another part of the carbon-capture machine turn that back into baker’s ammonia, delivering a nearly pure stream of CO2 gas that is compressed into a liquid and pumped into two wells that drop 1.5 miles beneath the earth. There, the captured CO2 is stored permanently between grains of rock.

If Sporn represents the dirty past of coal-fired electricity generation, Mountaineer is the future — the first power plant in the world to both capture and store underground any part of its CO2 emissions. At this point, Mountaineer stores less than 2 percent of the more than 500,000 metric tons of CO2 pumped out each month by the power plant, which generates enough electricity for 1 million American homes.

So does Mountaineer mean that coal has a future?

The goal is to make carbon capture and storage widespread within a decade.

President Barack Obama seems to think so, even as he continues to push for reducing emissions of greenhouse gases by more than 80 percent by mid-century. To meet that goal, Obama said during his State of the Union address in January, the U.S. must not only develop renewable sources of energy but must also invest in clean coal technologies. A week later, the Obama administration created an interagency task force to develop a federal strategy by August for carbon capture and storage (CCS), the underlying principle of so-called “clean coal.” The goal is to make carbon capture and storage widespread within a decade.

In fact, the administration wants at least five demonstration projects to be in operation by 2016. After all, the U.S. gets more than 50 percent of its electricity from burning coal. “If we can develop the technology to capture the carbon pollution released by coal, it can create jobs and provide energy well into the future,” Obama said in a speech to the nation’s governors on Feb. 3.

The technology exists to extract CO2 at coal-burning power plants. The main questions now are cost and safety. Storing liquid CO2 far below the ground provokes a deep unease in some people, who worry that a sudden release could end in asphyxiation as the liquid turns to gas when it rises to the surface. It’s also not necessarily easy to find a geologic formation — or abandoned oil and gas wells — that will safely store the greenhouse gas.

And, ultimately, CCS will do one thing for sure: raise electric bills. In some regions, adding today’s CCS technology would double the cost of electricity and stretch the financial resources of utilities. 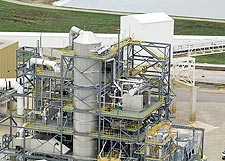 Courtesy of Alstom
Mountaineer’s chilled ammonia unit collects about 1.5 percent of the plant’s flue gas and runs it through a chemical process to capture more than 90 percent of the carbon dioxide.

Nevertheless, Mountaineer represents the first small-scale demonstration project to integrate both carbon capture and storage, and American Electric Power may receive $334 million in federal funds to scale up the project to capture 20 percent of the plant’s CO2 emissions.

The Obama administration also has resurrected a planned CCS project known as Futuregen, abandoned by the Bush administration in 2008. A consortium of countries, utilities, and companies with an interest in CCS — ranging from China to coal giant Peabody Energy — has pledged $400 million to build the plant in Mattoon, Ill., with the federal government covering the rest of the $1.5 billion cost.

The proposed plant would first turn coal into gas, and the gas combusted to spin a turbine to produce electricity. The result of this technology — known as integrated gasification combined cycle (IGCC) — is expected to be the removal of roughly 90 percent of the CO2 and almost all of the sulfur dioxide and nitrogen oxide from the power plant’s emissions.

The U.S. Department of Energy estimates that such an IGCC plant would produce electricity at a cost of $103 per megawatt-hour, compared to just $63 per megawatt hour for a pulverized coal-fired power plant without CO2 capture. That math would change if the U.S. Congress one day places a price on carbon dioxide. Various U.S. national laboratories and research universities — as well as the companies commercializing the technology — are striving to reduce that cost further, to as low as just $10 per metric ton of CO2 captured, says CO2 sequestration project leader Rajesh Pawar of Los Alamos National Laboratory in New Mexico.

Residents fear a leak as the ground deep beneath their feet fills up with CO2.

Despite the costs, utilities are moving forward with carbon capture and storage at existing and new coal-fired power plants. The primary driver seems to be the reality of governments eventually placing a cost on carbon dioxide emissions, both in the U.S. and throughout the world. Duke Energy has partnered with China’s Huaneng Group to develop carbon capture and storage technology and is considering a plan to capture 18 percent of the CO2 from its planned 630 megawatt, $2.35 billion IGCC plant in Edwardsport, Ind. Carbon capture and storage “is going to cost us money,” says Monte Atwell, general manager of General Electric’s gasification group, which designed the IGCC technology at Edwardsport. But, he added, “That plant is going to work. Failure is not an option.”

Oklahoma-based Tenaska aims to build a $3.5 billion IGCC power plant in Taylorsville, Ill. that would capture 50 percent of its CO2 emissions, and the Erora Group is planning a similar power plant in Henderson County, Ky. Existing power plants are also getting into the act, including the Southern Company, which plans to add its own chemistry set — known as amine scrubbers, which employ a different compound to capture the CO2 — to a power plant near Mobile, Ala.

CCS projects also are moving ahead in Europe. In the vineyards of Jurancon in southeastern France, a project to integrate both CO2 capture and storage is now complete. Last month, an old oil-fired boiler there was converted to burn natural gas in pure oxygen — so-called oxyfuel — and thereby create a relatively pure stream of CO2 that can be siphoned off and stored. The Lacq project will transport roughly 60,000 metric tons of CO2 per year 17 miles to a depleted natural gas field for storage.

China is partnering with Australia to build several demonstration projects.

The engineering firm, Alstom, which supplied the technology at Lacq, has installed an oxyfuel boiler for a coal-fired power plant in Germany, known as Schwarze Pumpe. That plant also demonstrates, however, one of the main challenges of carbon capture and storage: acceptance from the people who would have to live over the stored CO2. Plans to store the greenhouse gas from Schwarze Pumpe in a nearby natural gas field have foundered on resistance from the local government. A similar CO2 storage effort by Shell in the Netherlands has also been stopped by public resistance from the town of Barendrecht. Residents there fear a leak or declining property values as the ground deep beneath their feet literally fills up with CO2.

Nor are those concerns confined to Europe. “It’s supposed to be better down there than in the air,” says Mayor Scott Hill of the town of Racine, Ohio, directly across the river from the Mountaineer and Sporn power plants. “I wonder what happens long-term… You know, they just tell you what you want to hear.”

Nevertheless, experts from the U.N. Intergovernmental Panel on Climate Change to the International Energy Agency have identified carbon capture and storage as a necessary technology to combat climate change, particularly in developing countries like China, which meets most of its growing demand for electricity by building coal-fired power plants. The Chinese government, for its part, is partnering with its largest coal supplier, Australia, to build several demonstration projects, including one in Beijing that uses an amine scrubber to capture CO2 from a power plant that produces both heat and electricity. And ground has been broken on China’s version of FutureGen, dubbed GreenGen. The 650-megawatt, IGCC power plant is now under construction and could begin storing CO2 in depleted oil fields near the city of Tianjin as soon as 2015.

“Even with the most optimistic [projections] on renewables and nuclear, you still have 60 percent fossil fuels by 2030 with massive emissions,” said Philippe Paelinck, director of CO2 business development at Alstom. “If CCS technology is not accepted by the public, we will not be able to arrive at the necessary levels of emissions — and those are zero for the power sector by 2050.”

After all, the coal-fired power plants already built or planned in just the first 10 years of the 21st century would end up emitting more carbon dioxide in the next 25 years — 660 billion metric tons — than the 524 billion metric tons that have been emitted since the dawn of the Industrial Age in 1751, notes George Peridas of the Natural Resources Defense Council. And the U.N. Intergovernmental Panel on Climate Change estimates that a properly selected storage site would safely stow away 99 percent of the CO2 generated by a coal-burning power plant for at least 1,000 years.

But even if all that CO2 is captured and stored, coal will not be entirely clean, whether because of the impacts of the mountaintop removal mining that provides some of the fuel or the toxic ash that burning coal leaves behind. The ash ponds at the Sporn power plant, just over a grassy berm from Mountaineer, have been identified as a “high hazard” by the U.S. Environmental Protection Agency.

Mountaineer has captured and stored more than 3,000 metric tons of CO2 in the Copper Ridge dolomite formation since Oct. 1, and the company aims to capture as much as 100,000 metric tons a year in the future. “As with any new technology, it’s had its ups and downs,” says Gary Spitznogle, the project’s manager at AEP. “[But] it’s run long enough that we’re confident it works.”