In the Brazilian Amazon, 80 million head of cattle — nearly as many as exist in all of the United States — now graze on land that once was tropical rainforest or the biologically rich, wooded grassland known as cerrado. An area larger than France is given over to the cattle, making ranching by far the biggest driver of deforestation in Brazil’s Amazon, responsible for more than three-quarters of forest loss.

Environmental groups have warned for years that cattle production is gobbling up huge chunks of the world’s largest rainforest, but their campaigns have had no discernable impact on deforestation. Forest clearing remains stubbornly high while beef production has continued to expand, enabling the industry to become an economic and political juggernaut, seemingly unstoppable.

But in catering to conglomerates serving an international market — part of a broader trend over the past 20 years in which industrial corporations have replaced poor farmers as the primary agents of deforestation — producers have left themselves exposed to consumer backlash. It’s tough for an environmental group to target a subsistence farmer who’s clearing land to feed his family; it’s much easier to go after a multinational enterprise. So ironically, in its strength, the multibillion-dollar Brazilian cattle industry developed an Achilles’ heel.

In June, Greenpeace leveraged this vulnerability. The green group issued “Slaughtering the Amazon,” a report linking prominent global corporations — including Wal-Mart, Nike, and the French-based Carrefour grocery store chain — to cattle operations that are illegally clearing the Amazon rainforest. The fallout was immediate and substantial, and now a number of important players are moving to build on the report’s momentum by enlisting retailing giants to purchase Amazon beef and leather derived from more sustainable sources.

Those seeking to slow the deforestation of the Brazilian Amazon face daunting challenges in a region where lawlessness, intimidation, and 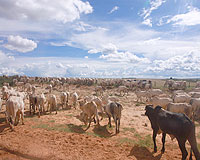 Photo by Rhett Butler/Mongabay.com
CLICK TO ENLARGE Nearly 80 million head of cattle graze on what used to be rainforest or wooded grassland in the Brazilian Amazon.

violence have often ruled. But the publication of the Greenpeace report has jump-started overnight a market for certified beef and leather, with the world’s biggest buyers now interested in creating a supply chain through which meat and hides can be traced to ranches that have stopped razing the forest and employ sound environmental practices. Some ranchers, corporations, and conservation groups are considering using sophisticated techniques — including reliance on satellite photography and the implantation of tiny electronic identification tags in cattle — to create a strong system of certification.

Greenpeace’s report, based on a three-year investigation, said that the Brazilian government had invested $2.65 billion in three major beef and leather processing companies that have been key players in driving deforestation. Greenpeace identified a host of brand-name international firms doing business with the three companies, including the shoe manufacturers Nike, Adidas, Reebok, and Timberland. The report highlighted the extent to which Brazilian cattle products end up in a wide array of consumer goods, from supermarket hamburgers to Nike Airs.

After the Greenpeace report was released, Brazil’s biggest beef customers — including Wal-Mart and Carrefour — announced they would suspend contracts with suppliers involved in Amazon deforestation. Nike and the Timberland shoe company did the same. The World Bank’s International Finance Corporation withdrew a $90 million loan commitment from Bertin, the world’s second-largest beef exporter. Brazilian investigators raided the offices of JBS, the world’s largest beef processor, and other firms, arresting executives for corruption, fraud, and collusion.

‘This is not a place for [non-governmental organizations] to be working. It’s a place for the cavalry.’

And a Brazilian federal prosecutor filed a billion-dollar lawsuit against the cattle industry for environmental damage, warning that firms found to be marketing meat raised on illegally cleared Amazon land would be subject to fines of 500 reais ($260) per kilo. Marfrig, the world’s fourth-largest beef trader, said it would institute a moratorium on buying cattle raised in newly deforested areas within the Brazilian Amazon. BNDES, the development bank that accounts for most financing for the agricultural sector in Brazil, announced it would reform its lending policies, making loans contingent on environmental performance.

But while the Greenpeace report effectively turned the Brazilian beef and leather industry upside down, it was short on solutions. Banning cattle production in the Amazon is unlikely given the growing global beef demand, due largely to the surging middle-class appetite for meat in the emerging economies of Brazil, China, India, and Russia.

In the aftermath of the beef scandal, concerned parties have turned to an unlikely figure: a Texas rancher named John Cain Carter. Working in partnership with the Instituto de Pesquisa Ambiental da AmazÃ´nia (a Brazilian NGO), the Woods Hole Research Institute, and other groups, Carter’s organization, AlianÃ§a da Terra, has devised a unique approach to promoting land stewardship in the Amazon, one that could eventually be applied to commodity production in ecologically sensitive areas around the world.

Carter is not a conventional Brazilian or Texas rancher. After serving in the first Gulf War, he married a Brazilian and ended up in the Amazon state of Mato Grosso. At that time, eastern Mato Grosso was a frontier in the truest sense of the word — a region without governance, where armed land invasion was rife, conflict between Indian tribes and outsiders raged, and disputes were settled in blood. The circumstances perpetuated a forest-clearing bonanza, and Carter moved to the Amazon during what was perhaps the greatest spasm of forest destruction ever. Some 79,000 square miles were destroyed between 1995 and 2004 — an area larger than Nebraska.

Carter readily concedes he is no environmentalist, but he says the carnage around him compelled him to act.

On paper, environmental laws in the Brazilian Amazon are among the world’s most stringent. Landowners are required to keep 80 percent of their land forested, but lack of law enforcement has undermined this regulation, while economics and politics have conspired to thwart efforts to slow deforestation. For environmental groups, it is hostile territory.

“Two of my workers were gunned down last week,” Carter said. “This is not a place for NGOs to be working. It’s a place for the cavalry.”

But even the cavalry isn’t necessarily on the right side of the law, according to Carter, who says some local officials are complicit in land-grabbing and illicit forest clearing.

“We have local politicians coming on the radio telling people to invade the land,” Carter said while piloting his Cessna over a patch of his reserva legal — the government-mandated forest easement— that was cut and burned by squatters in October, 2007. MarÃ£iwatsede, the Xavante indigenous reservation adjoining John Carter’s ranch, has been invaded several times. At one point the tribe retained control of only a tiny fraction of its land — an army of invasores was busily cutting down trees.

Still, Carter is hopeful that the situation can be improved by converting Brazil’s strict environmental codes into a marketing advantage for ranchers by guaranteeing to buyers that certified beef is produced sustainably.

Both Wal-mart and Nike have announced that they will require certification from suppliers.

Aliança da Terra’s certification system aims to take the place of a failed governance regime by creating incentives for producers to maintain their forest reserves, reforest waterways, implement fire controls, and conserve soils. Carter maintains Aliança certification could help Brazilian farmers and ranchers get premium prices by directly supplying major supermarkets and restaurant chains that can then say they are using legally and responsibly produced beef.

An unlikely advocate for Cain’s certification initiative is Blairo Maggi, the soy farmer-turned-governor of Mato Grosso, to whom Greenpeace gave its “Golden Chainsaw” award in 2005 for being “the Brazilian person who most contributed to Amazon destruction.” Maggi now says certification could be a ticket into more markets for Brazilian agricultural products. Even BNDES, the infamous funder of rainforest destruction, is now mandating that cattle producers demonstrate that cattle have been raised on land that was not illegally cleared.

Noting that the creation of protected areas on paper means nothing without enforcement, Carter said, “If you don’t engage the private sector, [the forest] is never going to be saved. There need to be incentives to preserve forest on private property. Ranchers are tired of being demonized. If they are presented with a viable option, they can be compelled to become part of the solution.”

In a sign that interest in certification is growing, the Forest Footprint Disclosure Project was launched in June to help identify how an organization’s activities and supply chains contribute to forest destruction. The U.K. government-sponsored initiative will ask companies to “disclose how their operations and supply chains are impacting forests worldwide, and what is being done to manage those impacts responsibly.” Major buyers of cattle products are joining in: Both Wal-mart and Nike have announced that they will require chain-of-custody certification from suppliers, and major fast-food chains are in negotiations.

Collaborating with Woods Hole, Google Earth, and others, Carter’s group is working to devise honest land registries and a transparent certification system. This could involve high-tech methods — including satellite photo identification of ranches, tiny electrodes implanted in cattle, and electronic documentation systems — to identify responsible ranches and the cattle they produce. 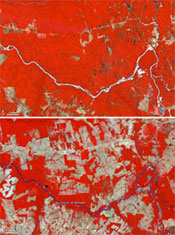 NASA
CLICK TO ENLARGE Deforestation in the Brazilian Amazon, 1992 to 2006.

Such an effort faces daunting challenges. Many producers are furious with the Greenpeace report and have threatened to bypass major beef buyers. While it may seem like an empty threat, Amazon beef is an export-driven industry and most goes to countries where environmental performance is at best a distant concern. Likewise, Brazilian shoppers haven’t shown a strong preference for the eco-credentials of products, suggesting that there remains a strong market for beef regardless of how it is produced. Gaming the system is also a possibility, especially given that BNDES is favoring the use of ear tags — which can be easily removed — for tracking cattle.

“In my hometown, one of the traditional centers of cattle ranching, they have a saying: ‘The cow walks, and the earrings fly,’” said Sergio Abranches, a Brazilian environmental journalist.

However, in the aftermath of the report, the Brazilian government has expressed keen interest in improving environmental performance. Beyond that, if such schemes successfully provide a financial carrot in the form of higher prices for beef and payments for reforestation, ranchers will be encouraged to become part of the system. But standards can be taken too far, becoming so burdensome for producers that they drop out if incentives can’t sufficiently sweeten the deal.

And there are grander issues in play. Brazil has committed to spending roughly $300 billion on new infrastructure projects, a prospect that could negate gains from a commodity tracking system and dwarfs the $21 billion the country seeks to raise for protecting the Amazon. Further, a new law, approved last month by President Luiz Inacio Lula da Silva, could outweigh the value of improved stewardship by ranchers. The law grants title to hundreds of thousands of farmers, ranchers, and squatters who have illegally occupied more than a quarter million square miles of protected forest. At present it is unclear whether the law will spur increased deforestation or bring some semblance of governance to the region, making it easier to control deforestation.

To some, these issues may suggest that curbing beef consumption is the ultimate solution to deforestation in the Amazon. In the meantime, however, it is clear that industry can play a critical role in turning the tide in the Amazon. And time, Carter and others point out, is short.

“If we don’t do something soon,” said Carter, “the whole forest is going to go up in smoke.”