Among the first sights to greet visitors to Denmark on the descent to Copenhagen’s airport is a sweeping arc of wind turbines rising from the harbor. From the airport, passengers can board an automatic Metro line that hustles them to the city center in just 15 minutes, crossing the path of the City Circle Line, a subway project that will place 85 percent of Copenhageners within 650 yards of a Metro station when the line opens in 2018.

Everywhere, visitors are greeted by streams of bicyclists; 36 percent of trips to work or school in the Danish capital are made by bike, and more than 20,000 cyclists enter the city center at peak hours, filling Copenhagen’s 249 miles of cycle tracks. Less visible are state-of-the-art facilities where waste heat from power plants is used to keep buildings warm via the world’s largest district heating network, or where waters from the city harbor are deployed to cool department stores, office buildings, hotels, and data centers. 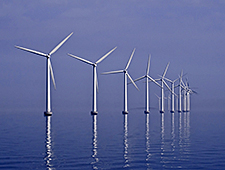 These innovations are just a prelude to what is planned in the coming years, all designed to make Copenhagen the world’s first carbon-neutral capital by 2025. Acting on a City Council plan approved last August, Copenhagen intends to replace coal with biomass, to add more wind and solar electricity to the grid, to upgrade energy-guzzling buildings, and to lure even more residents onto bikes and public transit.

“Copenhageners like the ambition, they like being part of the idea of going green for the whole city,” Copenhagen Lord Mayor Frank Jensen said in an interview with Yale Environment 360. “Our focus as a city, as citizens, is all about livability.” The mayor said that city residents are putting their own money into the low-carbon drive, noting that half of the turbines in the harbor wind farm, known as Middelgrunden, were funded by individual Copenhagen shareholders.

Clearly, Copenhagen’s plans face significant challenges, especially since city planners expect Copenhagen to add more than 100,000 residents by 2025. But at stake is the notion that a growing, modern city with more than a half-million inhabitants can systematically wring carbon from its economy. The battle to slow climate change will be won or lost in cities, which are responsible for more than 70 percent of global CO2 emissions and two-thirds of worldwide energy consumption.

Copenhagen has already made major progress, reducing its emissions by 21 percent from 2005 to 2011. The city currently emits about 2 million tons of carbon dioxide a year, and earlier initiatives were on target to reduce emissions to 1.16 million tons by 2025. The new plan approved last year will slash CO2 emissions even further, to about 400,000 tons by 2025. More time will be needed to wean private cars from fossil fuels. So Copenhagen plans to add at least 100 wind turbines to the grid over the next dozen years, and wind electricity not used in the city will be exported to other parts of Denmark to offset Copenhagen’s remaining several hundred thousand tons of transportation emissions.

Nearly three-quarters of the emissions reductions identified in the 2025 plan will come by transitioning to less carbon-intensive ways of producing heat and electricity. The goal is a diverse but complementary clean energy supply: biomass, wind, geothermal, and solar. “The Danish energy system is very much a systems solution — it’s not power as one, and heat as one — it’s integrated,” Jørgen Abildgaard, Executive Climate Project Director for the city of Copenhagen, says. Wind turbines now supply 30 percent of Denmark’s electricity, and under a national energy plan passed last year that share is set to rise to 50 percent by 2020.

The goal is a diverse clean energy supply: biomass, wind, geothermal, and solar.

Though not as visible as Copenhagen’s bicyclists and wind turbines, its heating and cooling infrastructure is playing a key role in slashing CO2 emissions. One of Copenhagen’s most innovative infrastructure projects is the Adelgade cooling plant, sheltered within the brick-clad shell of a retired power plant in the historic city center. Opened in June 2010, the plant is the hub of the country’s first district cooling network and a model of climate-conscious engineering.

The Adelgade plant draws cool seawater from an intake pipe located near the picturesque Nyhavn Canal and then delivers the chilled water through insulated pipes to buildings; the pipes are located below ground in the same tunnels in which steam is distributed via Copenhagen’s district heating network. Thomas Grinde, an engineer with Copenhagen Energy — a private firm owned by the city — took me on a tour of the plant. He said that every degree Celsius saved by pre-cooling with seawater saves 15 percent on electricity at the site’s absorption chillers. The city estimates that district cooling reduces carbon emissions by nearly 70 percent and electricity consumption by 80 percent compared to conventional air-conditioning.

From the cooling plant, Grinde drove me south to the Amager power station complex, which sprawls across a spit of land jutting into Copenhagen Harbor. There, a pilot project supplies geothermal heat directly into the district heating system. In March, construction began nearby on a clean-burning waste-to-energy plant that will provide electricity and heating to 150,000 households. According to Mayor Jensen, half of Copenhagen’s indoor heating comes from combusting waste.

Half of Copenhagen’s indoor heating comes from combusting waste.

The two major combined heat and power (CHP) stations that serve Copenhagen, Amager and Avedøre, largely burn coal. But because waste heat from the stations is sent to the district heating system, they operate at around 90 percent efficiency, compared to around 40 percent for conventional coal-fired power plants. Rather than use furnaces or boilers located in individual buildings for heating, Copenhagen delivers hot water or steam to radiators via a network of pipes covering 98 percent of the city.

Under the climate plan, district heating is to be carbon neutral by 2025. The Amager and Avedøre plants, which today burn a limited amount of biomass imported from Poland, Russia, Sweden, and the Baltic countries, will replace coal entirely with wood chips and straw certified as sustainable by the Danish Energy Association.

Copenhagen’s pursuit of carbon neutrality also rests on its ability to meet demanding energy efficiency and transportation goals. Commercial and residential buildings are to reduce electricity consumption by 20 percent and 10 percent respectively, and total heat consumption is to fall by 20 percent by 2025.

In an interview, Bo Normander, director of the Worldwatch Institute’s Europe office and a Copenhagen City Council member, noted that new buildings in Copenhagen must now be constructed to Denmark’s Low Energy Class ratings; the 2020 standard calls for near net-zero energy buildings. 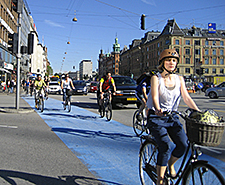 It will be considerably harder to achieve energy savings in existing buildings. More than 70 percent of Copenhagen’s buildings were constructed before the introduction of Denmark’s energy efficiency standards, and a major hurdle is the so-called landlord-tenant dilemma, since many Copenhageners rent and neither tenants nor landlords have a strong financial interest in retrofitting buildings to make them more efficient.

“Most of the people here rent,” Marianna Lubanski, executive director of the Copenhagen Cleantech Cluster, told me. “If I own a building, and I have 10 people living there, and I invest a lot of money in energy savings, my tenants will get the savings, not me. We need new ways to share the costs and gains of energy efficiency… Copenhagen can’t succeed with their plan if they don’t find a way.”

She said she would like to see an ESCO (energy service company) market launch in Denmark, where private firms take on the risk of guaranteeing energy savings and in return are paid a fee by landlords or tenants.

Another key component of becoming a net zero-carbon city is further reducing the use of cars. Bo Normander, like many Copenhageners, does not own a car and bikes to work. “It’s the most convenient, quickest, and healthiest way to get around,” he said.

Newcomers to Copenhagen quickly learn the same, as did I. Within a few weeks of starting a job in Copenhagen, in 2008, I abandoned the Metro for a bike, which became my year-round way of getting around, no matter the weather. Weekday mornings, I pedaled along the perimeter of the cemetery where Hans Christian Andersen and Søren Kierkegaard rest, girding myself for the merge into the horde of bicycle commuters racing along Nørrbrogade, Copenhagen’s busiest bike corridor, toward the city center. It was exhilarating and invigorating, and easily the fastest way to my office. Why would anyone own a car here? I often wondered.

The question is even more relevant today. Intent on reducing transportation’s share of the total city emissions, currently 22 percent, Copenhagen is expanding its cycling and public transit infrastructure to attract even more users. The improvements include “green wave” traffic signals set to the speed of oncoming bikes, angled footrests that enable cyclists to rest without dismounting at intersections, and an additional 44 miles of cycle tracks — paved paths separated from cars and pedestrians by curbs. To entice suburban commuters to abandon cars for bikes, Copenhagen is partnering with neighboring cities to add wider, smoother, better-lit cycle tracks. In April 2012, the first so-called “bike superhighway,” an 11-mile link connecting Albertslund with Copenhagen, opened. Two more are under construction and a total of 26 are planned, Normander said. By 2025, the city wants 75 percent of trips to be made by foot, bike, or public transit.

The city will also invest in alternative fuels. Abildgaard said Copenhagen is looking to convert its bus fleet to models powered by hybrid drives running on biogas. The city projects that 20 percent to 30 percent of all cars and small trucks, and 30 percent to 40 percent of all heavy vehicles, will run on electricity, hydrogen, biogas, or bioethanol by 2025. By 2015, 85 percent of the city’s fleet of 1,000 small vehicles will run on electricity, hydrogen, or biofuels, officials say.

What will all this cost? Direct city investment in the 2025 Climate Plan is estimated to be $472 million through 2025. Add private funds and total investment could hit $4.78 billion over the same period, Copenhagen officials say. “We can see that we have to invest a lot of money to reach the target,” Mayor Jensen told me. “But we can see also that we can create a lot of new jobs with that huge investment. Copenhagen can be a green laboratory for developing and testing new green solutions.”

Normander was upfront about the challenges. He will be watching to see, for instance, if the Avedore and Amager power plants can sustainably source enough biomass. And he worries that as Copenhagen adds 1,000 residents per month, traffic will increase, even though the city lacks room for additional cars.

“It’s a very ambitious plan,” he said. “But it’s also something we can do.”