Geological disasters might influence climate, for instance when volcanic debris blots out the sun. But climate cannot disrupt geology. Right? Well, actually no, says a British geologist Bill McGuire, in a troubling new book, Waking The Giant: How a Changing Climate Triggers Earthquakes, Tsunamis and Volcanoes.

There is, McGuire argues, growing evidence to incriminate changing climate in the planet’s most destructive geological events. Melting ice sheets and changes in sea level can, he maintains, set off the largest earthquakes and volcanic eruptions. Indeed, thanks to climate change, a human hand may already be at work. Potentially, McGuire’s argument adds a whole new dimension to why we should be worried about climate change.

Fred Pearce discusses the theory of how a changing climate could trigger volcanic eruptions and earthquakes.

To listen to this content, you must have Javascript enabled in your browser preferences. You will also need to download the latest Flash Player.
You may also download the audio file.

The most solid evidence for climatic influence on geology comes from the end of the last ice age, around 12,000 years ago, says McGuire, who is a volcanologist and professor of geophysical and climate hazards at University College London. Analysis of volcanic deposits, published in the past decade by several authors, has found that this period of rapid climate change, when ice sheets retreated from much of the planet, coincided with a sudden outburst of geological activity. The incidence of volcanic eruptions in Iceland increased around 50-fold for about 1,500 years, before settling back to previous levels.

What happened? McGuire makes the case that during the long preceding glaciation, the weight of ice some two kilometers thick over Iceland maintained high pressures underground that kept magma at the root of volcanoes solid and suppressed eruptions. But as the ice melted, the huge

‘Volcanoes can be incredibly sensitive to tiny changes to their external environment,’ McGuire says.

weight was released and the land surface lifted, sometimes by hundreds of meters. This reduced the pressure below. He cites Freysteinn Sigmundsson at the Nordic Volcanological Center at the University of Iceland in Reykjavik, who says: “Reduction of pressure enabled mantle rocks to melt, creating a zone of magma upwelling underneath Iceland.” Magma production increased 30-fold — that magma, the argument goes, burst out in a spectacular epidemic of volcanic eruptions.

Similar, though less pronounced, surges in volcanic activity occurred at that time across much of the planet, wherever large ice sheets or small tropical glaciers melted, says Hugh Tuffen, a volcanologist at the University of Lancaster in England. From the Eifel mountains of Germany to the Chilean Andes, and from California to Kamchatka, volcanoes were awakened, says McGuire, who chaired a conference on climate change and geology at the Royal Society in London in 2009.

While the planet’s volcanoes have been relatively peaceful during the long stable climate since then, McGuire warns that we need to watch out as the world starts to warm once more. “Volcanoes can be incredibly sensitive to tiny changes to their external environment, constantly teetering on the edge of stability,” he says.

Defrosting the planet’s cold regions has for some years been implicated in a range of “natural” disasters. The rapid melting of glaciers creates dangerous lakes of meltwater, perched high in the valleys of the Himalayas and Andes.

Some geologists have expressed skepticism about any immediate cause for concern.

Thawed soil unleashes landslides. Christian Huggel, a geographer at the University of Zurich, Switzerland, found in a study of mountain slope failures in Alaska, New Zealand and the European Alps that “all the failures were preceded by unusually warm periods,” lasting days or weeks. There are also concerns that warming will release the potent greenhouse gas methane from permafrost and continental shelves, creating a dangerous feedback to global warming itself.

But McGuire is talking about changes deep in the Earth’s crust, caused by the lifting or imposing of the weight of ice and ocean water at the surface. And the concern relates to earthquakes as well as volcanoes. For earthquakes, the evidence points to changes in sea levels, as well as the melting of ice.

Many geological fault lines are on a knife-edge, awaiting any nudge to send their seismic mayhem to the surface, says McGuire. His University College London colleague Serge Guillas has found that, over the past 40 years, El Nino cycles in the tropical Pacific Ocean have triggered a regular seismic response as the pressure of water has changed with short-term sea level fluctuations. There are more earthquakes in the eastern Pacific in the months after the cycle lowers sea levels in the area by a few centimeters, which flexes the plates beneath.

A 2009 study co-authored by Selwyn Sacks, a geophysicist at the Carnegie Institution in Washington D.C., concluded that something as seemingly insignificant as low atmospheric pressure in the heart of typhoons was sufficient to trigger slow earthquakes in strata east of Taiwan. 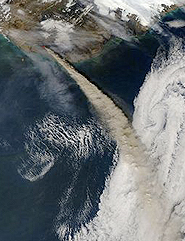 NASA
Smoke billowing from Iceland’s Eyjafjallajökull after its eruption in 2010 grounded transatlantic flights for a week.

The evidence from volcanoes of short-term influences is even more startling. According to Oxford University geologists Ben Mason and David Pyle the planet has volcanic seasons. In the Northern Hemisphere, eruptions happen most frequently between November and April. The reason, they say, is shifts in water round the globe. This movement of water slightly squashes or releasing the land beneath, at times pushing magma to the surface rather like toothpaste in a tube.

Some researchers are unconvinced by all this. When the journal Nature published a short report on McGuire’s Royal Society meeting, the first anonymous online comment began: “This has to rank as one of the most preposterous warming scare articles of the new century.”

None of the climate scientists I contacted felt competent to comment on McGuire’s ideas. But some geologists have expressed skepticism about any immediate cause for concern. Roland Burgmann of the University of California, Berkeley did not want to add to a statement he made five years ago that “it would take a long time” for sea level rise to trigger seismic activity.

McGuire is keen to underline that his message “is not intended as a speculative rant.” He is simply reviewing the voluminous literature already in the public and peer-reviewed domains. He makes a point of dismissing talk that climate change might have caused the Sumatra earthquake that triggered devastating Indian Ocean tsunami in 2004 as “clearly nonsense.” But he insists that “people who find the idea [of climate change triggering geological events] flaky don’t appreciate that the link between abrupt climate change and a response from the solid Earth is supported by huge amounts of research.”

So how scared should we be? The short answer is nobody knows. While clearly some geological responses to surface events could occur fast, others could take thousands of years to emerge.

One place we might expect trouble is Iceland, the scene of the eruption of Eyjafjallajökull two years ago. Its smoke billowing across flight paths

The world of climate science has so far failed to acknowledge these new potential hazards.

grounded transatlantic flights for a week. Nobody is blaming that eruption on climate change, but the island’s ice cap has been thinning for more than a century now. In response, the land surface is rising, often by more than 20 millimeters a year. This is still an order of magnitude less than the rates at the end of the last ice age, but Sigmundsson says it nonetheless creates “highly significant” pressure release — and new magma ready for ejection.

There are other dormant volcanoes and quiescent fault-lines lurking beneath the thick ice caps over Greenland and Antarctica. Andrea Hampel, a geologist at Leibniz University in Hanover, Germany, warns that the subdued geology in both places today is likely caused by the presence of large ice sheets. “Shrinkage [of the ice] owing to global warming may ultimately lead to an increase in earthquake frequency in these regions,” she predicted in a paper published two years ago. “This effect may be important even on timescales of 10 to 100 years.”

Tuffen, of the University of Lancaster, agrees. He points out that the West Antarctic Ice Sheet is set to thin by 150 meters by 2100, potentially waking dormant volcanoes. Other volcanoes in the firing line, he says, could include Nevado del Ruiz in Colombia and Cotopaxi near Quito, the capital of Ecuador.

We could already be seeing a resurgence of earthquakes. McGuire admits there is no certainty about any link, but he points out that there has been “an unprecedented cluster of massive earthquakes” in recent years. Since 1900, the world has been struck by seven “super-quakes,” with a magnitude exceeding 8.8. While only one of them occurred in the first half of the 20th century, three more came in the second half, and there have been three more in the past seven years, bringing death and destruction to Sumatra, Chile, and Japan.

The world of climate science has so far largely failed to acknowledge these new potential hazards from climate change. There is no mention of them in the Intergovernmental Panel on Climate Change’s last science assessment in 2007.

A special report of the Intergovernmental Panel on Climate Change (IPCC) on extreme climate events, published in April, restricts its comments on McGuire’s ideas to a single paragraph. While conceding that crust movements resulting from melting ice “may result in an increase in earthquake activity, perhaps on timescales as short as 10 to 200 years,” it concludes that “there is low confidence in the nature of recent and projected future seismic responses to anthropogenic climate change.” McGuire says it is not yet clear if quakes, tsunamis and volcanoes will be addressed in the next full scientific assessment, due in 2014.

Living in the Anthropocene:
Toward a New Global Ethos

A decade ago, Nobel Prize-winning scientist Paul Crutzen first suggested we were living in the “Anthropocene,” a new geological epoch in which humans had altered the planet. In an article for Yale e360, Crutzen explain why adopting this term could help transform the perception of our role as stewards of the Earth.
READ MORE

Why this reticence? McGuire concludes that climate scientists at the IPCC have blind spots, both about geology and about learning the history of what happened during past eras of climate change. The science of geological responses at the end of the last glaciation, he says, “is extremely well established.” Nonetheless, the implications for the future remain largely ignored even among the most strident campaigners for action on climate change.

Nobody should want climate scientists to rush around the world warning of geological Armageddon. Too much remains unknown. Caution certainly is justified. But the danger is that a topic of potentially huge importance ends up being ignored. And the research needed to substantiate — or to repudiate — these concerns is never done. That would be unwise.