For years, the idea of prospecting for potentially rich deposits of minerals on the ocean floor was little more than a pipe dream. Extractive equipment was not sophisticated or cost-effective enough for harsh environments thousands of feet beneath the ocean’s surface, and mining companies were busy exploring mineral deposits on land. But the emergence of advanced technologies specifically designed to plumb the remote seabed— along with declining mineral quality at many existing terrestrial mines — is nudging the industry closer to a new and, for some environmentalists and ocean scientists, worrying frontier. 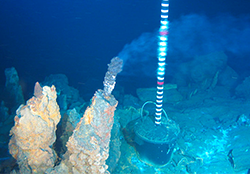 More than two-dozen permits have been issued for mineral prospecting in international waters. And in April, after years of false starts, a Canadian mining company signed an agreement with the government of Papua New Guinea to mine for copper and gold in its territorial waters. That company, Nautilus Minerals, plans to begin testing its equipment next year in European waters, according to the International Seabed Authority (ISA), a regulatory agency established in 1994 under the auspices of the United Nations. A Nautilus spokesman, John Elias, said the plan is to award a construction contract in November for a specialized mining vessel. “All other equipment has been manufactured and is in final assembly,” he wrote in an email.

Dredging or drilling the seafloor could potentially obliterate deep-sea ecosystems.

Chief among critics’ concerns is that seabed mining will begin without comprehensive regulatory oversight and environmental review. They say dredging or drilling the seafloor could potentially obliterate deep-sea ecosystems and kick up immense sediment plumes, which could temporarily choke off the oxygen supply over large areas. And powerful international companies, they add, could take advantage of the lax or non-existent review and enforcement capabilities in many small island nations of the Pacific Ocean — precisely where seabed mineral deposits are thought to be highly concentrated.

“Communities are concerned that our governments don’t know enough about the ecology or the implications” of seabed mining, said Maureen Penjueli, coordinator of the Pacific Network on Globalization, a Fiji-based non-profit that has tracked seabed prospecting in the region since 2009. “We haven’t seen much benefit from land-based mining, let alone fisheries or tourism — and here we are entering a new frontier.”

But industry proponents say no extractive industry is free of environmental impacts, and that only a fraction of the seabed covered by exploration permits would actually be mined. Companies and governments, they say, are carefully studying both deep-sea ecosystems and emerging mining technologies in order to prevent or mitigate ecological damage.

“We are committed to using ecologically sound, deep-seabed mineral recovery methods,” said Jennifer Warren, the regulatory director at UK Seabed Resources, a subsidiary of the U.S. defense giant Lockheed Martin’s British arm. “Toward that end, we are working closely with research institutions and scientists to understand any potential environmental impact of commercial recovery efforts.” 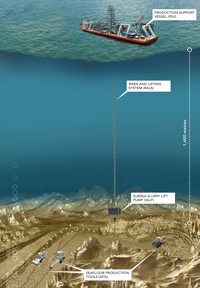 Diagram of a deep sea mine site. NAUTILUS MINERALS

Gaining that kind of understanding is a work in progress. As late as the 1950s, the deep sea was still viewed as a dark and barren place with little or no biodiversity worthy of protection. But in the 1960s, new sampling technologies prompted the discovery of new deep-sea species, and by the late 1970s, scientists had discovered bacteria that could thrive amid hydrothermal vents in deep, volcanically active regions. Those bacteria are turning out to be food for a number of “beautiful and strange” invertebrates, according to Cindy Van Dover, a marine biologist at Duke University. By the early 1990’s, scientists were speculating that the deep sea played host to as many as 10 million species of small invertebrates.

It is amid this awakening to deep-sea biodiversity that interest in seabed mineral mining is heating up. While investing in seabed-mining operations remains comparatively expensive, “the equation is turning,” according to Michael W. Lodge, legal counsel with the ISA. “People are starting to think that upfront investment is worth it for the long term payoff.” The ISA has issued seven new seabed exploration permits this year, Lodge noted, bringing its global total to 26, stretching across an area of international waters roughly the size of Mexico.

Nautilus Minerals’ planned operation in the territorial waters off Papua New Guinea, however, is widely expected to be the world’s first commercial-scale deep-seabed mine. Several neighboring countries have begun to issue export permits — and in some cases, are drafting seabed-specific mining legislation. New Zealand has also been weighing applications for two seabed mines in its waters, which would target iron sands and phosphate, respectively.

Metals like gold and copper can accumulate around hydrothermal vents in the seafloor.

In an email message, James Hein, a geologist with the U.S. Geological Survey and the president of the International Marine Minerals Society, a non-profit organization linking industry, government, and academic institutions, suggested that the global rush to mine so-called “rare earth” elements — which are used to manufacture cellular phones, wind turbines, solar panels, electric cars and other applications — is a key driver in moving the industry forward.

Other sought-after resources include sulfide minerals — a source of precious metals like silver, gold and copper — that accumulate around gaps in the seafloor where chemical-rich fluids leak into the ocean at temperatures nearing 1,000 degrees Fahrenheit. The Nautilus Minerals project in Papua New Guinea plans to mine a sulfide deposit by cutting the seabed with a remote-control machine that is 26 feet tall, 42 feet wide, and 55 feet long. According to the company, the ore will be extracted with an “associated suction mouth” and pumped to the surface — a distance of about a mile.

“The process itself is essentially a large vacuum cleaner on the end of a hose,” said Chris Castle of Chatham Rock Phosphate, the company behind the phosphate-mining application pending in New Zealand.

Here and elsewhere, however, environmental battle lines are now being drawn. In June, a New Zealand court, citing environmental concerns, riled the mining industry by rejecting a proposed plan for an iron sands mine about 15 miles off the coast of the country’s North Island. The company behind the proposed mine, Trans-Tasman Resources, says it has spent over seven years and more than $50 million studying the potential impacts. An appeals hearing is scheduled for next March. 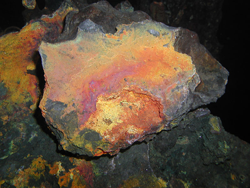 Sulfide-rich rocks are sources of copper, nickel, and other marketable metals. NAUTILUS MINERALS

Meanwhile, the New Zealand advocacy group Kiwis Against Seabed Mining has argued that the mines would pose risks to iconic mammals — including blue whales and Maui’s dolphins — that outweigh any potential economic benefits.

Castle, Chatham Rock Phosphate’s project director, said the environmental impacts on the seabed would be far less than those that fishing trawlers regularly inflict. But Les Watling, a biology professor at the University of Hawaii at Manoa, argued that sediment plumes from the phosphate mine could stress or kill an entire species of local coral, Goniocorella dumosa, leading to wider impacts because the coral’s branches are a habitat for smaller organisms. And Liz Slooten, a zoologist at New Zealand’s Otago University, said the sounds from seabed mining in that area could damage or destroy the hearing of blue whales, causing them to flee and perhaps even beach themselves.

Ultimately, the exact impacts of deep-sea mining in New Zealand or beyond won’t be entirely clear until the mines actually open, said Phil Weaver, a geologist and the coordinator of a three-year project called Managing Impacts of Deep Sea Resource Exploitation, which launched in 2013 with a $11.4 million grant from the European Commission. “We need to put in place some criteria and protocols which will at least try to control those impacts based on available information.”

Individual countries are free to choose their own regulatory approaches to seabed mining.

In March, the ISA began soliciting public comments for its first-ever Mineral Exploitation Code. A voluntary environmental code drafted by the International Marine Minerals Society in 2001 will inform the new ISA document, according to Hein, the society’s president. David Billett of Britain’s National Oceanography Centre, who sits on the ISA’s legal and technical commission, said environmental matters are “regularly raised” at the committee’s meetings, and that the ISA has strict guidelines for the sort of ecological data that prospective miners must collect along seabeds.

Still, individual countries are free to choose their own regulatory approaches to seabed mining, and permits in the South Pacific have already been issued in waters that cover an area the size of Iran, according to the Deep Sea Mining Campaign, an international coalition of non-profit groups. A 2010 study in the journal Marine Policy said the “absence of a clearly defined regulatory regime” in international waters was encouraging seabed prospectors to pursue projects in territorial waters, where legal risks were smaller. It named Tonga and its neighbor Papua New Guinea as two countries that would struggle to balance economic development against the need to protect marine ecosystems.

Environmental groups are watching carefully as the Nautilus Minerals project gathers speed in Papua New Guinea. The company says its mine will not contaminate coral or fisheries, and Jonathan Copley, a prominent marine ecologist at Britain’s University of Southampton, has said that the project’s design appears to be environmentally sensitive. Yet Nautilus and other international firms have other mining applications scattered across the South Pacific, and Van Dover of Duke University said scientists’ biggest concern is the cumulative impacts of multiple mines opening in the same area.

“A single mining event — at the scale of a single hydrothermal vent field — would be no worse than the most extreme natural disturbance,” Van Dover said in an email message. “But multiple mining events in a region in a short period of time — i.e. within a decade — would be unwise without good environmental knowledge of the ability of the system to recover.”