The weekend following President Obama’s energy policy speech on March 30 and the White House’s simultaneous release of its “Blueprint for a Secure Energy Future,” many newspapers ran a cartoon by Jeff Stahler depicting the eight presidents from Richard Nixon to Barack Obama, each supplying one word of the refrain: “We must reduce our dependency on Mideast oil.” Nearly a year earlier, after President Obama delivered his first Oval Office address to the nation setting forth his energy policy goals following the BP oil spill in the Gulf of Mexico, Jon Stewart of The Daily Show played clips from the same eight presidents — all promising to end our dependence on oil, all offering other energy alternatives, and all setting deadlines for reaching their goals.

The problem, of course, is that 40 years of energy policy failures are not funny.

Until the 1970s, we produced domestically all the oil we needed. But since then we have had to import most of the oil we use, much of it from the Middle East. And we rely on an even dirtier fuel — coal — to produce half our electricity. 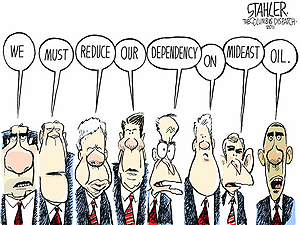 Four decades after energy policy first took center stage in our nation’s political discourse, the fundamental difficulties that brought energy onto the policy forefront remain unresolved. The United States has 4 percent of the world’s population, but consumes 25 percent of the world’s oil. In 1970, we imported less than half a billion barrels of oil; by 1980, our imports had increased to nearly 2 billion. Now we import about 3.5 billion barrels annually. Much comes from Canada and Mexico, but we still depend on OPEC oil to keep our vehicles moving. We import 13 million barrels of oil every day, 5 million from OPEC countries.

Even our most effective domestic energy policies have failed us, in large part because we have failed to put a true price on the fossil fuels we consume. In 1973 about 17 percent of our nation’s electricity was generated from oil; now just over 1 percent is. The good news is that producing electric power is now essentially a domestic enterprise. The bad news is that electricity accounts for about 40 percent of U.S. carbon dioxide emissions, and given the risks from climate change and other pollutants, our heavy reliance on dirty coal-fired electricity is now just another problem to solve.

Presidents have all sought a technological “silver bullet” to solve our problems. Richard Nixon, for example, was certain the nuclear “breeder reactor” was the best path forward on energy; Jimmy Carter placed his bets on fueling U.S. cars with “synfuels” made from coal. Both cost billions, and both came to naught.

Congress has elevated narrow regional interests over national goals, routinely providing large subsidies and tax breaks to favored constituents and contributors. The heavily subsidized ethanol industry has no doubt been the most costly of these pork-barrel programs. But the most scandalous involved “black liquor,” a concoction made from wood pulp, which increased, rather than reduced, petroleum use, while bestowing about $8 billion of government largesse on the paper industry from 2007 to 2009. And in 2008, congressional “earmarks” for specific institutions, projects, or locations took up one half of the total R&D budget for biomass, one third for wind, and more than one quarter for hydrogen projects — an absurd way to develop new energy technologies.

Sherlock Holmes famously instructed us to be alert to a dog that fails to bark. In his March speech, President Obama seemed ready to deploy all of the levers of government to cure us, at last, of what all eight presidents, including him, have called our “addiction to oil.” He promised to open federally controlled property to more oil drilling and to expand production of domestic natural gas. He said he would use the federal government’s spending power to purchase only hybrid, electric, and alternative fuel cars and trucks and to substitute biofuels for petroleum in military jets. The president also promised government “incentives” for a litany of oil-saving items and activities, including automobile batteries, electric fueling stations, high-speed rail and mass transit, energy-efficient building materials, and biofuels. And he promised to tighten regulatory requirements governing automobile fuel efficiency, to extend such regulations to large trucks, and to adopt new federal requirements for the ways in which the nation’s electricity will be produced. Along the way — notwithstanding the troubles in Japan — he again embraced nuclear power, and he even gave a thumbs-up to that chimera, “clean coal.” The president would regulate, bribe, purchase, and cajole to transform how we produce and use energy in this country.

Reflecting the true costs of energy would require taxing energy consumption rather than subsidizing production.

In his kennel of proposals, however, one dog failed to bark, the same dog that never barks. In the thousands of pages of energy legislation and regulations enacted since energy policy came to the fore in the 1970s, Congress has never demanded that Americans pay a price that reflects the true price of the energy they consume. For nearly a decade following the oil embargo of 1973, Congress refused even to allow the price of gas at the pump to reflect the worldwide market price of oil. No one now contemplates requiring gasoline prices to include, for example, the costs of keeping oil moving safely from the Persian Gulf into our gas tanks, or insisting that our electricity prices reflect the costs of coal pollution or of nuclear power safety.

The problem, of course, is that reflecting these kinds of costs in the price of energy would require taxing energy consumption, rather than subsidizing its production. As our massive government debt reminds us, it is far easier for our government to spend than to tax. Past efforts to tax energy consumption are not encouraging. Recall the failed efforts of Jimmy Carter to tax gasoline or Bill Clinton’s BTU energy tax defeat. So no one should be surprised that President Obama did not suggest that we should tax what we want to reduce — petroleum use and electricity consumption from fossil fuels — and use the revenues to reduce taxes on things we want to increase, such as jobs and wages.

The president has consistently said that his energy plan would require “tough” (but unspecified) choices. But — no doubt looking ahead to his re-election campaign — he failed to ask the American people to do anything tough. Despite all his bold talk of policy initiatives, the president failed to say how he planned to pay for his new spending incentives. He didn’t even ask Americans to drive less or more slowly, to turn down their thermostats, or to turn off the lights when they leave a room.

Unfortunately, experience calls into question the efficacy of his plans. Many of the “incentives” he promised, if not most, will take the shape of tax breaks, despite nearly half a century of compelling evidence — from ethanol, wind power, hybrid vehicles, and energy-saving home improvements, to name just a few — that they are wasteful and inadequate to the task.

And “command and control” regulations, where federal or state regulators tell producers and manufacturers exactly what level of emissions or energy efficiency will be allowed, have also been overly expensive and frequently ineffective. For example, our system of automobile fuel efficiency standards (CAFE) is unnecessarily costly and much less effective than need be. Either a cap and trade regime or a gas tax would eliminate more gasoline consumption at a fraction of CAFE’s costs. But, given last year’s failure of climate change legislation, President Obama also declined to say anything about the well-known cost savings advantages of cap-and-trade regulatory regimes.

Since he first began running for the presidency, Barack Obama has given many speeches describing our nation’s pressing need to transform how we produce and consume energy. This president knows well that, despite all the laws Congress has enacted since 1973, our policies have always been inadequate. In 2010, however, when climate legislation died in Congress, Obama learned first-hand the potent political barriers to effective action. Now the president hopes that the turmoil in the Middle East and the nuclear power troubles in Japan will galvanize the nation into action. The fear, however, is that knowing our past failures will not keep us from repeating them.