In 1997, Arthur Weis found himself with an extra bucket of seeds. Weis, who was teaching at the University of California at Irvine at the time, had dispatched a student, Sheina Sim, to gather some field mustard seeds for a study. When Sim was done with her research, Weis was left with a lot of leftover seeds. For no particular reason, he decided not to throw the bucket out. “We just tossed it in a cold, dry incubator,” said Weis.

Weis is glad they did. When a severe drought struck southern California, Weis realized that he could use the extra bucket of seeds for an experiment. In 2004 he and his colleagues collected more field mustard seeds from the same sites that Sim had visited seven years earlier. They thawed out some of the 1997 seeds and then reared both sets of plants under identical conditions. The newer plants grew to smaller sizes, produced fewer flowers, and, most dramatically, produced those flowers eight days earlier in the spring. The changing climate had, in other words, driven the field mustard plants to evolve over just a few years. “It was serendipity that we had the seeds lying around,” says Weis.

Weis is convinced that his experiment is just a harbinger of things to come. Global warming is projected to drastically raise the average global temperature, as well as producing many other changes to the world’s climate, such as more droughts in California. And in response, Weis and other researchers contend, life will undergo an evolutionary explosion.

“Darwin thought evolution was gradual, and that it would take longer than the lifetime of a scientist to observe even the slightest change,” says Weis, who is now at the University of Toronto. “That might be the average case, but evolution can also be very rapid under the right conditions. Climate change is going to be one of those things where the conditions are met.”

Over the past decade, conservation biologists have published a string of studies demonstrating that global warming is changing the face of nature. Red squirrels in Canada breed earlier in the spring, for 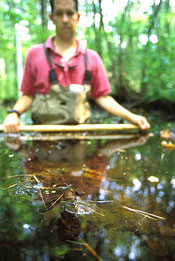 example. Feral sheep in Scotland are getting smaller. Many populations of birds, animals, and plants are shifting their ranges, as well. Species that live on mountains are moving uphill; other species are shifting away from the equator and toward the poles.

There are two things that can cause these sorts of changes. One is known as plasticity. In many plant species, genetically identical individuals will grow short in windy conditions and tall in calm ones. Humans are plastic, too. Over the past two centuries, for example, people in industrialized countries have become much taller than their ancestors, mainly due to the extra protein and better health they’ve enjoyed (and the extra protein and better health their mothers have enjoyed while they were pregnant).

Plasticity can help animals and plants thrive as conditions change. Insects, for example, emerge from cocoons in the spring as they sense the days getting longer. Their clock is genetically encoded, but they are also plastic enough to emerge ahead of schedule if the plants they feed on start growing sooner.

On the other hand, genes themselves can change, too. When the environment changes, individuals with certain genetic variations may be more likely to survive than others and have more offspring. They pass down their own genes to the next generation, and over time the entire population changes thanks to natural selection.

Yet conservation biologists have only rarely looked into which cause — plasticity or natural selection — has been responsible for the climate-driven changes they’ve documented. “People really weren’t thinking about evolution at all,” says David Skelly, a professor of ecology at the Yale School of Forestry & Environmental Studies. “They thought it happened on thousand-year time scales.”

But in recent years, evolutionary biologists have demonstrated that natural selection can move swiftly in response to manmade events — including changes in climate. Skelly studies wood frogs that live in Connecticut ponds. Over the past few decades, these ponds have been changing. Forests growing on abandoned farmland have been casting once-sunny ponds into cool shade. Beavers have been creating new ponds in open fields, creating ponds that get lots of light.

Natural selection can move swiftly in response to man-made events.

Skelly and his colleagues have collected wood frog eggs from sunny and shady ponds and have reared them under identical conditions in his lab. Even though the frogs were close relatives, they had quickly diverged in many ways. Frogs from beaver-created wetlands could survive in warmer water than ones from shady ponds. The shady ponds tended to dry up sooner than the sunny ones in Skelly’s study, and that difference in timing had an effect on the development of the frogs. “The animals we collected from heavily-shaded ponds grew faster than frogs in sunny ponds that were literally a rock’s throw away,” says Skelly.

This changing view of evolution has led some researchers to look for evidence that global warming is driving evolution. William Bradshaw and Christina Holzapfel at the University of Oregon, for example, have studied a mosquito that lays its eggs inside carnivorous pitcher plants. The larvae hatch in the spring and feed on the dead insects that fall in. Bradshaw and Holzapfel have demonstrated that the mosquitoes have experienced natural selection, causing them to open sooner than they did a quarter-century ago.

In some cases, natural selection is working in a straightforward way. Weis, for example, had predicted that droughts would make field mustard plants bloom earlier. In wet years, it pays for plants to grow big before they flower, so that they can make more seeds. But in dry years, they run out of water before they can reap the benefit. Instead, earlier flowering plants have more luck. “What we saw was exactly what the theoretical model predicted,” says Weis.

But there are also many complexities to climate-driven evolution that scientists don’t understand very well yet. Red squirrels in Canada breed 18 days earlier in the spring, but the shift is not just a matter of natural selection or plasticity. Both forces are at work at the same time. In other words, all the squirrels are responding to the changing climate by moving up their breeding schedule, and genes associated with an early timetable are spreading through the population.

In other cases, a warming climate is changing animals by making natural selection weaker, not stronger. Among the feral sheep of Scotland, larger lambs used to be more likely to survive the harsh winters. Now that the winters are milder, small lambs don’t pay such a heavy price for their size. As a result, the average size of sheep is dwindling.

Some scientists believe that evolution will speed up as temperatures rise.

Juha Merilä of the University of Helsinki warns that in a lot of cases in which natural selection seems to be at work — some involving climate change, some not — there may not be any natural selection at all. Merilä and his colleagues have studied a colony of red-billed gulls in New Zealand that have been gradually losing weight over the past 50 years. But when the scientists analyzed the pedigree of 16,520 birds, they found no evidence that the population was slimming because smaller birds were having more chicks than bigger ones. Something in their environment is causing the birds to develop to smaller sizes, regardless of their genes. “There are a multitude of possibilities,” he says, such as a dwindling food supply.

Merilä urges his fellow biologists to use rigorous methods like those employed by Weis and his colleagues on field mustard plants to look for natural selection. “It’s probably happening, but the methods we’re using aren’t up to the rigorous standards I would like to see,” he says.

If life is indeed evolving in response to climate change now, a number of scientists argue that this evolution will speed up in decades to come as temperatures rise and other changes emerge.

“Evolution is going to be important in the future,” says Andrew Hendry of McGill University in Montreal. That means that conservation biologists need to take evolution into account when they try to project what happens to the world’s biodiversity as the planet warms.

The Intergovernmental Panel on Climate Change’s latest report warns that roughly a quarter of all species may be committed to extinction by global warming. The IPCC based that estimate on studies on the ranges of species. Researchers calculate the conditions to which a species is adapted — temperature, rainfall, and so on — and then project where that range will be in the future. In some cases, the range shifts faster than the species can move. In other cases, the suitable range shrinks. In either case, a species will be trapped in a dwindling habitat and become more likely to become extinct.

But these studies assume that species can only cope with climate change by moving, not by evolving. And scientists already know that some species have started evolving in response to global warming already. “Evolution is going to save a number of species from extinction,” Hendry predicts.

Yet Hendry doesn’t consider evolution an ecological Get-Out-Of-Jail-Free card. While some species may be able to evolve quickly, some will evolve slowly — if, for example, they take many years to mature. “They may not evolve quickly enough to forestall extinction,” says Hendry.

Hendry also points out that natural selection can hit biological walls. “There are just some limitations that organisms can’t overcome. We’re never going to be able to walk around at -273 degrees Celsius,” says Hendry. Likewise, some species may not be able to adapt to the new climate.

Unfortunately, scientists may not be able to appreciate the full scope of evolution’s effects for decades. Weis is now laying the groundwork for that research with something he and his colleagues call the Resurrection Initiative. They are starting to gather seeds and put them in storage.

“Fifty years from now, botanists can draw out ancestors from this seed bank and do much more sophisticated experiments on a much bigger scale,” says Weis. “It will answer some very nitty-gritty details about the evolutionary process itself. We want to take the serendipity out of it.”