Two by two, the wild rice harvesters emerge from the grass-filled lake and drag their canoes to shore. The harvesters, Lake Superior Chippewa, are reaping their ancestral food in the traditional way — one poling the boat through the waist-high tangle, and the other bending the stems and gently brushing ripe seed loose with a pair of batons. It’s hard, dirty work on a steamy Minnesota late-summer day. They’re caked with chaff and sweat. But the canoes are loaded with the sacred grain they call manoomin. It was a good harvest, they say. 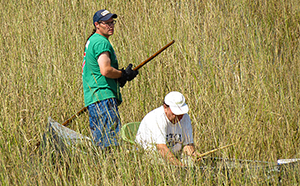 For decades, this lake on the reservation of the Fond du Lac band of Lake Superior Chippewa, near Duluth, was choked with weeds and produced little of the so-called wild rice that once blanketed the upper Great Lakes. Huge swaths of the nutritious native plant — not actually rice but an annual aquatic grass (genus Zizania) — were reduced to remnants by dams, industry, logging, and other disruptive land uses over the past century-and-a-half.

But with a blend of ancestral knowledge, modern equipment, and cutting-edge expertise, Fond du Lac natural resource specialists are bringing back the “food that grows on water.” Reservation lakes will yield an estimated 30,000 pounds this year, feeding families and hosting ceremonies with the delicacy that tribal legend says was prophesied to their ancestors. Their approach has been so successful that the band is now leading the first major state, federal, and non-profit collaboration to restore part of Lake Superior’s former vast wild rice ecosystem.

The earthy grain prized by epicureans is fundamental to the indigenous people, also called Ojibwe or Anishinaabeg, who flank the Great Lakes from Michigan to Minnesota. “It’s in every bit of our way of life,” says Thomas Howes, the Fond du Lac natural resources manager, sitting on the gunwhale of a canoe filled with the bright green spikelets he has just finished harvesting. “That’s why you see Ojibwe people make this degree of effort.”

One group is restoring mountain meadows that tribes maintained for generations in California’s Sierra National Forest.

Similar efforts are underway by native communities across North America. From restoring salmon nurseries in the Pacific Northwest, to rebuilding caribou herds in the Canadian Rockies, to removing New England dams blocking alewives and sturgeon from their historic runs, tribes are reviving traditional food sources and healing scarred lands, both on and off reservations. The path isn’t easy — tribal projects face daunting obstacles, including a crazy-quilt of property rights, circumscribed jurisdictions, and conflicts with neighbors over visions for the land. But their centuries of practical knowledge and cultural focus provide valuable guidance for stewards of the environment today.

“There has been a new movement by indigenous people to restore tribal lands and resources,” says Darren Ranco, an anthropology professor at the University of Maine in Orono, and a member of the Penobscot Nation, which is realizing an ambitious goal of reopening fish freeways on the dam-choked Penobscot River. “There’s also been a reimagined focus on food and food sovereignty.”

The movement was bolstered by 1970s court decisions increasing tribal resource rights, 1980s expansion of environmental quality legislation, and an infusion of money after Indian gaming was legalized in 1988. Now, a new generation of Native American scientists, attorneys, and politically savvy advocates are bringing their expertise back to the reservation, joining government and conservation coalitions and procuring grants.

“That’s brought some really important solutions to the table that probably weren’t there before,” says Ranco, who directs the university’s Native American Research program. “The Western tradition was continually marginalizing indigenous knowledge and values, and no longer is that happening. … At least it’s not happening as much.”

Near the union of the St. Louis River and Duluth — the Great Lakes’ largest industrial port — Fond du Lac resource specialist Terry Perrault is coaxing the waters into producing their first wild rice harvest in more than 100 years. The site of former Ojibwe villages, this was once the largest single wild rice stand in the region, holding an estimated 3,000 acres. 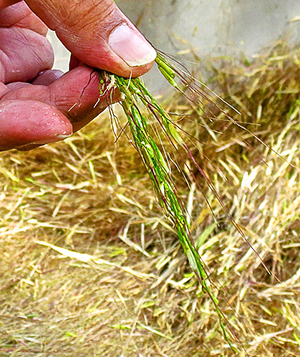 Perrault stands on the deck of the tribe’s fan boat in a tapering rain, showing young Minnesota Conservation Corps workers how to spread rice seed over a choppy gray expanse. “You used to do all this by canoe,” he tells them. “Paddle all the way out, paddle all the way back. It’s a lot easier now.”

The 1,600 pounds of seed they’re spreading this early September day were harvested by Fond du Lac ricers just a day earlier. The band’s rice experts selected this particular strain for hardiness in the estuary’s tide-like water fluctuations, called seche, which can raise and lower water by two or more feet daily.

Changes in water level can uproot or drown young rice plants at their tender “floating leaf stage” before they stand upright, explains Perrault, who had spent the bulk of the summer hacking through pondweed, arrowhead, and other tenacious weeds with a truck-sized aquatic mower. They’ll do it again next year, and the rice could take up to five years to become established. The 150-acre project, which will expand to perhaps 1,500 acres eventually, is part of the massive, multi-agency Great Lakes Restoration Initiative. The St. Louis River, which includes a Superfund site contaminated by steel and cement manufacturing, along with former coal docks, chemical plants, ship building and more, was designated one of the nation’s 10 Most Endangered Rivers this year by the conservation group American Rivers.

‘For tribes, one of the biggest challenges is that their restoration vision is not always shared by their neighbors.’

Bringing back wild rice is integral to the St. Louis River project because it’s a “really key component” of the wetlands ecosystem in the upper Midwest, says Daryl Peterson, director of restoration programs for the nonprofit Minnesota Land Trust, a project partner. It’s a critical food source for migrating waterfowl, ripening just in time for the fall migration. And for local wildlife, “it’s a keystone species because it’s such a prolific seed producer,” Peterson says.

Numerous other environmental efforts around the country are also taking cues from native traditions. One is bringing back mountain meadows that tribes maintained for generations in what’s now California’s Sierra National Forest. The moist, fire-resistant clearings — critical in the region’s current matchstick conditions — have become crowded with invasive young pines, firs, and cedars that provide “a step-ladder for fire,” says Ron Goode, North Fork Mono tribal chairman. Moreover, the thirsty conifers soak up water and keep it out of the watershed, he adds.

So Goode and tribe members launched a demonstration meadow restoration for the U.S. Forest Service and local officials. The former meadow “was overgrown with scotch broom, invasives, and people dumping their trash there,” Goode says. “Over the years it had become quite a mess.” It took nearly a month to clean up, hauling off truckload after truckload of trash and wood. But in the end they opened the 5-acre meadow and revealed steams. The success brought grant money and requests for more restorations, he says. The tribe has now restored three meadows, covering 15 acres, and has several more restoration projects underway.

In the Pacific Northwest, indigenous communities have been working for years to bring back the salmon and trout that once teemed in the Columbia River basin. The Columbia, one of the most heavily dammed and industrialized rivers on the continent, is also on American Rivers’ top ten endangered list. The Columbia River Inter-Tribal Fish Commission, a coalition of tribes with fishing rights on the river, has adopted a “gravel-to-gravel management approach concerned with all the issues impacting salmon throughout their life,” says Sara Thompson, spokeswoman for the commission. The tribes, working with state and federal biologists and conservation groups, have restored habitat and taken other steps that have helped Chinook populations rebound.

‘Rice supported our lives for generations, and so you’re doing things right if it’s around,’ says one tribal member.

“For tribes, one of the biggest challenges is that their restoration vision is not always shared by their neighbors,” says Catherine O’Neill, a law professor and senior fellow at Seattle University’s Center for Indian Law and Policy. State pollution laws are often inadequate for native people, whose diets can expose them to far higher levels of toxic contaminants than the general population, so some tribes have set tougher standards in their jurisdictions, she said. Washington’s Spokane tribe, for instance, whose members eat much more fish than state water-quality regulations take into account, has established the nation’s strictest standards for its own waters. But a bid to increase the amount of pollution discharge allowed in neighboring Idaho now threatens the Spokanes’ downstream fishery, she says.

Tribes can also butt heads with activists on both sides of the environmental spectrum.

“Some of the conservation groups don’t want any [fish and animal] harvest,” says Barbara Harper, a public health toxicologist and professor at the Oregon State College of Public Health in Corvallis, who has worked on a number of tribal projects. “And of course the sportsmen groups, that’s all they’re interested in. And the tribes are kind of in-between.”

Scientists in the U.S. and elsewhere are conducting intensive experiments to cross hardy weeds with food crops such as rice and wheat. Their goal is to make these staples more resilient as higher temperatures, drought, and elevated CO2 levels pose new threats to the world’s food supply.
READ MORE

The Fond du Lac band’s projects face several obstacles, natural resource manager Howes says. Rebuilding the reservation wetlands, which were confined to ditches during a state push to increase farmlands in the early 1900s, is hindered by a checkerboard of state, county, and private land ownership. Old dams continue to disrupt water flow. And tribal attorneys and scientists have been keeping a watchful eye on proposed copper-nickel mining in the nearby Duluth Complex, which they fear could release sulfides and other pollutants harmful to wild rice and the watershed.

Looking out over wild rice-studded waters, where a wood duck dabbles and blackbirds flit through the prolific stalks, Howes says, “This supported our lives for generations, and so we see it as like a debt to repay, to take care of it. … You’re doing things right if it’s around.”