In his quest for a fuel of the future, Roger Ruan has found a valuable resource in something nobody else wants — the wastewater from Minneapolis’ largest sewage treatment plant.

The University of Minnesota professor is tapping into this rather unlikely source to grow single-celled algae and produce a diesel-like biofuel. He is one of many researchers around the world working to make biofuel from algae at a price that is competitive with gasoline and diesel fuel. But Ruan’s project — along with several other sewage-to-fuel experiments — has a distinct advantage over competing algae-to-fuel efforts: His nutrient-rich feedstock is free and available at a nearly constant rate all year long.

And perhaps most importantly, Ruan’s algae can not only be used to produce fuel, but can also clean up the wastewater, potentially saving millions of dollars.

A single acre of algae, even in an inefficient open pond, can produce 5,000 gallons of biodiesel per year, says Ruan—100 times as much as soybeans. 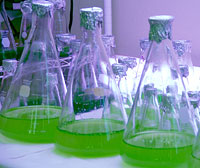 And unlike many other algal biofuel experiments, Ruan’s work does not rely on food-based crops, such as sugar cane, as a feedstock to produce the algae.

“This (sewage-based biofuel) potentially is a very, very good energy crop,” says Ruan, a professor of biosystems and agricultural engineering. “Potentially its yield can be much, much higher than starch from corn or oil from soybeans. The main reason is that it can grow at a much, much faster rate.”

Growing fuel-producing algae in waste is not Ruan’s idea alone. The concept drew international attention in 2006 when a startup in New Zealand called Aquaflow successfully harvested biofuel from open-air ponds at wastewater treatment plants. The company expects to be able to produce the biofuel on a large scale, and recently attracted the attention of major players in the airline industry by announcing it had distilled a special blend that meets the technical specifications for jet fuel.

Aquaflow’s advances, combined with the Pentagon’s interest in biofuels as an alternative to conventional jetfuels, has sparked a flurry of academic and industrial research in the United States. A team at the University of Virginia has been working to maximize the efficiency of the algae-growing process, and the chemistry department at Old Dominion University in Norfolk, Va., has built a small-scale bioreactor at a local wastewater treatment plant that may eventually be able to produce $600,000 worth of fuel per year.

The university was looking for a way to produce a renewable fuel that wouldn’t compete with food crops.

Even NASA has thrown its hat in the ring, with researchers working on the development of floating greenhouses for algae cultivation. The bags are stocked with human waste and sown with species of freshwater algae, and then deployed into the ocean. The semi-porous plastic membrane allows the exchange of CO2 and oxygen to continue uninhibited, but prevents the salty seawater from disturbing the fecund growing conditions inside. Soaking up the sun and feasting on the nutrients in the sewage, the algae produce fat-laden cells that can be harvested and refined into fuels.

U.S. entrepreneurs have also entered the market. In June, Indianapolis-based Algaewheel contracted with the city of Reynolds, Ind., to construct a module at a wastewater treatment facility that uses a wheel-like rotating contraption to filter incoming sewage through a series of algae cultures. The fuel generated from the process will be used to power the facility.

In Minneapolis, Ruan and the Metro Council are conducting research with the intention of designing a demonstration algae-to-fuel plant within about a year.

The Metropolitan Wastewater Treatment Plant sits beside the Mississippi River, just downstream from St. Paul. The 10th-largest plant of its kind in the country, it treats sewage from three-fourths of the Twin Cities metro area — more than 200 million gallons a day. Some of its low brick buildings, adorned by graceful Art Deco lettering, date to the plant’s origin in 1938. From a rooftop, the 170-acre grounds is a warren of basins, tanks, stacks, and pipes.

Incoming sewage is screened for trash and chunks, then runs into settling ponds to remove solids. In aeration ponds, carefully managed populations of microbes break down organics. After more settling to remove dead microbes, wastewater is sterilized with liquid chlorine before being discharged into the river. The effluent is often cleaner and clearer than the river itself. Amazingly, there is barely a whiff of odor.

As clean as the effluent is, Minnesota is considering new standards that will most likely require further reduction of phosphorous and nitrogen. Excess phosphorus is a real concern in the Land of 10,000 Lakes because it causes unsightly algae blooms and fish kills. Nitrogen sluicing off farmland throughout the Midwest is blamed for the hypoxic dead zone at the Mississippi River’s mouth. But meeting the new standards through conventional treatment could easily cost “hundreds of million of dollars” a year, says Willet. “We need to find some options.”

So the University of Minnesota and the Met Council began research in 2007. Through its Initiative for Renewable Energy and the Environment, the university was looking for a way to produce a renewable fuel that wouldn’t compete with food crops or tie up agricultural land. The Met Council wanted cleaner wastewater.

Early on, Ruan decided against growing algae on the raw wastewater streaming into the plant: The task of managing more than 200 million gallons a day seemed daunting. Instead, research focused on the “centrate,” the millions of gallons squeezed from settling-pond solids by powerful centrifuges. The foul juice is so high in nitrogen and phosphorus that it kills most organisms.

The algae yielded 30 percent of their mass as oil and grew so fast they could be harvested daily.

Ruan’s initial task was to screen thousands of species of algae to find one, or several, that would flourish in the harsh conditions of the centrate. He dispatched his assistants to scoop green, soupy water from ponds and rivers. Most perished in the concentrated nutrients, but Ruan eventually found several species — greenish, spherical, single-celled plankton only 5 microns across — that survived. By acclimating these survivors, Ruan was able to produce strains that thrived in the wastewater, while reducing the levels of phosphorus by 50 to 80 percent. They yielded 30 percent of their mass as oil and grew so fast they could be harvested daily.

So far Ruan and the Met Council have shunned genetically engineered algae, though they almost certainly could boost growth and oil content. “We are not interested because eventually on a massive operation like this, some of it is going to get loose in the river,” says Willet. “And I have enough regulations.”

Ruan also decided against open ponds to grow his algae. Ponds are inefficient, because algae blooms block light. Commercial-scale ponds would also require large acreage, and conditions are tough to control, especially in winter. “If you’re talking about an open pond system, it’s almost impossible in a northern climate,” says Ruan. Finally, “if the algae is dilute, it’s very, very expensive to harvest it.”

Instead, Ruan began building dozens of different “photo-bioreactors”— various configurations of tubes or plates that allow good exposure to natural and artificial light, as well as easy access for harvesting and cleaning. The current generation of reactors is operating in a shed in the plant’s “solids building,” not only to contain the stench of the centrate, but also to keep the equipment secret until the university secures patents.

Like soybeans, algae oil can be used to make biodiesel. Or it can be “cracked” through heat and catalysts (as in an oil refinery) to produce “green diesel,” identical to petroleum-derived diesel. Either biodiesel or green diesel could power the Metro Council’s public bus fleet, which already uses biodiesel in blends of up to 20 percent. “We are a guaranteed market,” says Willet. Remnant algae mash — the nitrogen-rich pulp — can be sold as fertilizer, animal feed, or raw material for ethanol.

But there’s one big problem, Ruan says, and it’s common to any attempt to convert algae to fuel. “We have done a lot of work to get the oil out, but we know it is expensive,” says Ruan, who is lead scientist on several other promising algae biofuel projects that do not use wastewater as a feedstock.

Two methods are in common use: Drying and crushing the algae, or removing oil with a solvent. Both, says Ruan, are expensive. Researchers are exploring various ways to break down algae cell walls — through osmotic shock or ultrasound, for example — to make oil recovery easier.

It pays to keep trying, because with available processes, Ruan says, algae-diesel might cost $20 a gallon. But, says Willet, “that doesn’t take into account the avoided costs that I will realize.”

During the next year, Ruan and the Met Council hope to develop a design for a demonstration-scale plant to utilize perhaps 20,000 gallons of centrate a day. That amount is only 2 percent of the centrate the Metro plant generates, and would produce only about 160 kilograms of dry algae and 8 gallons of oil a day. But, says Ruan, an algae plant of that size could eventually be scaled up to treat the entire stream of centrate and produce near 400 gallons of oil a day. Or it could be used as is to treat the wastewater of a city of 50,000 people.

And that is the key — wastewater treatment with the added benefit of renewable fuel. Or renewable fuel with the benefit of cleaner water. Either way, says Ruan, “we feel that this is probably a perfect combination.”