Until he embraced rising gas prices and “Drill, baby, drill” as a wedge issue in the 2008 presidential campaign, Senator John McCain’s “Lexington Project” for building the economy and putting people back to work looked a lot like Senator Barack Obama’s “New Energy For America” plan.

Both stressed relying on environmental principles — pollution prevention, waste reduction, resource conservation, energy efficiency — to produce jobs and prosperity. And while the candidates differed on emphasis and approach, both presented plans that called for scaling up renewable energy, capping carbon emissions, and enacting “made in America” requirements for clean, high-mileage next-generation vehicles. Obama went further in also promising to invest considerable sums in rapid transit.

These ideas, which have occupied space on the list of 2008 electoral priorities, represent more than the accumulated wisdom of 40 years of American environmentalism. Rather, they reflect the real financial value and quality-of-life benefits of a green economic development strategy that has been successfully pursued over the last two decades by major metropolitan regions in the United States.

From Boston to San Francisco, Seattle to Washington, D.C., and more than a dozen big and medium-size cities in between — Chicago, Denver, Salt Lake City, St. Louis, Grand Rapids, and Knoxville, to name a few — elected officials and municipal leaders teamed up with business executives and community groups to decide on a new economic path, groomed and adorned with assorted green ideas and practices, that is almost certain to find its way back to official Washington.

A new $475 million park in Chicago, for instance, spurred the development of more than 10,000 units of housing within a mile. Knoxville is developing 750 acres of vacant and industrial land along the south shore of the Tennessee River into a new community of homes and businesses built close together, linked by walking and biking trails and within easy walking distance to downtown across a much cleaned-up river.

Denver residents approved in 2004 a sales-tax increase to build a 150-mile rapid transit system and now has two popular light-rail lines that are transforming the city’s downtown and neighborhoods. 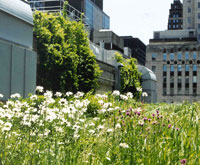 A rooftop garden atop Chicago City Hall has become a signature of the city. CITY OF CHICAGO

Grand Rapids spent $300 million to rebuild its wastewater treatment system in order to clean up the Grand River for new recreational facilities. San Francisco is pursuing some of the nation’s most aggressive energy-efficiency standards for new homes and buildings. Washington, D.C., passed an ordinance in 2006 that required any building over 50,000 square feet, public or private, to meet the highest levels of energy efficiency and environmental sensitivity by 2012. Of the 200 buildings under construction or planned in Washington, according to the city Planning Department, all are already meeting these LEED green building standards.

And in each of these cities, real estate values are holding much steadier than in the neighboring suburbs. In many — Seattle, Chicago, San Francisco, Washington, Denver, Salt Lake City — population and job growth also are increasing, according to census figures.

The irony is that the federal government — which has largely abandoned its traditional role in either developing new environmental policy or administering to the needs of cities — played a big part in the early 1990s in getting the new green economic strategy started at the local level. During the Clinton administration’s first term, Congress passed the brownfield cleanup law that changed standards for what level of toxic substances was safe. The law reduced the cost of digging up and transporting contaminants and made it possible for cities to redevelop old industrial sites.

Chicago’s strategy, for instance, has evolved into providing incentives to develop new entrepreneurial businesses in solar manufacturing; encouraging green retail development; and creating new neighborhoods that feature ecologically sensitive condos built in areas that were once off limits. It began, though, with Mayor Richard M. Daley’s politically popular decision in the early 1990s to plant more trees, mulch more gardens, and build a green roof on City Hall, a tiny and inexpensive public works project that has become a signature of the Windy City.

“Environmental policy has emerged as a central organizing principle of economic growth at the metropolitan level in America.”

The performance of these and many other green measures — developing water-absorbing pavement, for instance — helped Chicago attract more than 100,000 new residents, add tens of thousands of downtown jobs, spark a high-rise housing boom, build thousands of affordable homes, reduce poverty rates, spur a $9-billion-a-year visitor and convention industry, and transform itself into one of the most beautiful cities in America.

“Until the second half of the 1990s, cities were on a trend of still losing population, which began in the 1950s,” said Harriet Tregoning, the director of planning in Washington, D.C. “They were still trying to figure out what was their reason for being. Some decided to compete by trying to be suburbs. Others, like Washington, New York, and Boston, said: ‘Our future is about being a city, about the real advantages of a city.’”

Those advantages, said Tregoning, are primarily proximity and convenience. She noted that cities decided that they had to improve the experience of urbanism in order to leverage their attributes. In most cases that involved enhancing parks, cleaning up waterfronts, boosting neighborhoods and transit, using hybrid-electric buses and other cleaner vehicles, getting more energy efficiency in buildings, and adopting environmental practices, like saving flood-absorbing wetlands, to lower costs.

More recently the green steps have been more elaborate — like using grass clippings to generate methane in Boston, or wind power to generate 9 percent of municipal energy in Eugene, Oregon; figuring out how to avoid building more parking and keep cars out of downtown Seattle; or providing job-training programs in Oakland and Milwaukee for inner-city residents eager to install solar energy systems in homes and office buildings.

“You have to remember,” added John Rahaim, who was raised in Detroit, was educated in the Midwest, and now serves as the planning director in San Francisco, “that America turned its back on our cities. We focused on building the suburbs. Cities were forced to come up with their own ideas about what it takes to grow and prosper. A lot of what we came up with has to do with cleaning up what we have, making what we do more efficient. We learned that environmental principles and economic principles are really one and the same.”

This is not to say, of course, that cities do not still have their problems. Crime is starting to tick up after falling to levels not seen since the 1960s. Most big-city school systems are not providing the level of education and guidance needed to succeed in the 21st century. Soaring costs and deepening deficits hinder public services. Traffic congestion, even with $4-a-gallon gasoline, remains a pain.

But there is no question that cities are performing economically and culturally in ways they haven’t since the end of World War II.

Their effort to develop green economic strategies coincided with powerful demographic trends that, starting in the mid-1990s, drove college-educated young people and empty-nest baby boomers out of suburbs to join new immigrants in safer and cleaner urban neighborhoods. Rising energy prices, static income growth, cracked and congested highways, and a number of other burdens of modern American life cemented the logic of those individual decisions.

“Here we are in a carbon-constrained world, a world with high gas prices and rising costs, and our cities are places people want to live and work,” said Tregoning. “It used to be that people defined sustainability as a place far away from the city, where you were surrounded by forest and supposedly able to live this life of nature and freedom. Today that vision isn’t sustainable for all kinds of reasons.”

“It used to be that people defined sustainablity as a place far away from the city… Today that vision isn’t sustainable for all kinds of reasons.”

Nor is it likely to be ever again. The sprawling civilization that America invented in the 20th century was largely the result of a handful of major market trends: cheap energy, cheap land, rising incomes, formidable government wealth, competitiveness in core industries, and moderate population growth. The drive-through economy and the culture of convenience and plenty that it fostered were possible because families could afford the homes and cars, and government built the highways and water lines that tied it all together. The big losers were cities, which hemorrhaged jobs and marooned millions.

The resurgence of cities — and the reliance on green economic ideas to improve the quality of life and generate jobs — represents a reasoned response to the new market trends of the 21st century: high energy prices, high land costs, static family incomes, scarce resources, government deficits, flagging competitiveness, global climate change, and the third-fastest rate of population growth among industrialized nations. Cities make sense in a world in which gas prices and congestion are discouraging driving and encouraging mass transit ridership, and where making do with less — less land, fewer bedrooms and bathrooms, and fewer vehicles — can also add up to having more.