Where is Sombath Somphone? With every day that passes, the fate of one of Southeast Asia’s most high-profile environmental activists, who was snatched from the streets of Laos in December, becomes more worrisome.

His case has been raised by the State Department and countless NGOs around the world. But the authorities in Laos have offered no clue as to what happened after Sombath was stopped at a police checkpoint on a Saturday afternoon in the Lao capital of Vientiane as he returned home from his office. It looks increasingly like state kidnap — or worse, if recent evidence of the state-sponsored killings of environmental campaigners in other countries is anything to go by.

Personal danger is not what most environmentalists have in mind when they take up the cause of protecting nature and the people who rely on it in their daily lives. But from Laos to the Philippines to Brazil, the list of environmentalists who have paid for their activism with their lives is growing. It is a grim toll, especially in the last year.

One of the most grisly cases occurred last year in Rio de Janeiro on the final day of the Rio+20 Earth Summit. On the afternoon of June 22, delegates from throughout the world — me included — were preparing to leave for the airport as Almir Nogueira de Amorim and his friend JoÃ£o Luiz Telles Penetra were setting sail for a fishing trip in the city’s Guanabara Bay.

The two men, besides being fishermen, were leaders of AHOMAR, the local organization of seamen, which they had helped set up three years earlier to fight the construction of gas pipelines across the bay to a new refinery run by the Brazilian national oil company Petrobras. The pipelines, they said, would cause pollution, and the engineering works would destroy fisheries.

Margarito Cabal was the 13th environmentalist killed in the Philippines in the past two years.

The issue they were raising — protecting the livelihoods of people who used natural resources — was at the heart of the Rio conference’s agenda for sustainable development. But someone in Rio saw it as a threat. Two days later, the bodies of the two men had been found. One was washed up on the shore, hands and feet bound by ropes. The other was found at sea, strangled and tied to the boat, which had several holes in the hull.

This was no isolated assassination. In the three years since AHOMAR was set up, two other campaigners had been murdered. To date nobody has been convicted of any of the offenses. The refinery is expected to open early next year.

The month before the two Brazilian fishermen were murdered, a civil servant on the other side of the world who was campaigning against a planned hydroelectric dam on the southern Filipino island of Mindanao was shot death. Margarito Cabal was returning home from visiting Kibawe, one of 21 villages scheduled to be flooded by the 300-megawatt Pulangi V hydroelectric project.

Cabal’s assailant escaped and remains unknown. No prosecution has followed, but attention has focused on government security forces. According to the World Organization Against Torture, an international network based in Switzerland that has taken up the case, Filipino soldiers had for several weeks been conducting military operations in and around Kibawe and had attacked peasant groups opposing the dam. If the soldiers did not do the deed, they certainly helped create an atmosphere in which environmentalists were seen as a target for violence.

Cabal is the thirteenth environmentalist killed in the Philippines in the past two years. Seven months earlier, a Catholic missionary was murdered after opposing local mining and hydro projects. “The situation is getting worse,” says Edwin Gariguez, the local head of Caritas, the Catholic aid charity.

And it’s getting worse in other nations as well. NGOs such as Human Rights Watch agree that 2012 was also a new low for human rights in Cambodia, with campaigners against illegal logging and land grabs targeted by state security personnel and by gangsters working for companies harvesting the nation’s natural resources. 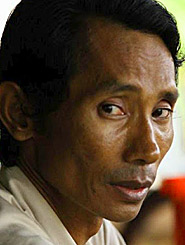 One of those campaigners was Chut Wutty, a former soldier and one-time Cambodian activist with Global Witness, a UK-based NGO that highlights links between environmental exploitation and human rights abuses. When Global Witness was expelled from the country a few years ago, Wutty formed the Natural Resource Protection Group to help Cambodian villagers confront illegal loggers.

But last April, Wutty was shot dead, apparently by a group of military police that he encountered while taking local journalists to see illegal loggers in the west of the country. According to a government report, Wutty’s assailant was killed at the scene, allegedly by a forest ranger. A provincial court recently abandoned an investigation into Wutty’s murder and released the ranger. One of the journalists, who fled into the forest when the shooting started, says she does not believe the official version of what happened, and human rights groups have also said they find it implausible.

Criminality is at the heart of much of the destruction of the world’s forests. A recent report from the UN Environment Programme concluded that up to 90 percent of the world’s logging industry was in one way or another outside the law. In such circumstances, violence against those who try to protect the forests can become endemic.

So it was that last November saw the culmination of an extraordinary vendetta against a Mexican family trying to protect the forests of mountainous southern Mexico against logging companies and drug barons, who want to clear forest land for growing marijuana and opium poppies.

Juventina Villa Mojica, a leader of the Campesino Environmentalist Organization of Petatlan, was driving off-road up a hillside with her young son, seeking a spot where they could get a cellphone signal, when gunmen ambushed them. In the preceding days, she had been trying to organize the evacuation of 45 families from her village near Coyuca de Catalan in the state of Guerrero, which was under siege from drug barons. For that reason, she had a police escort. But the escort mysteriously vanished in the minutes before she and her son died in a hail of bullets.

The previous year, Villa’s husband and two of their other children had been killed in similar violent circumstances. According to a local human rights activist, Manuel Olivares, more than 20 members of the Villas’ families have been killed because they refused to give up their forests. So far, despite state government promises, nobody has been arrested for any of the murders.

Global Witness estimates the death toll among environmental activists has doubled to more than two a week.

Such killings happen across the world, usually in remote regions where the truth is hard to establish. They may appear haphazard, almost random. But Andy White, coordinator of the Washington-based Rights and Resources Initiative, which helps citizens’ groups fighting for control of their natural resources, says there is an emerging pattern. “As conflicts grow over control of land and forests and minerals, activists who want to hold back the extractive industries come under increasing pressure. Sometimes they pay with their lives.”

Global Witness, which keeps a tally on killings of social and environmental activists, says the trend is gruesomely upward. It estimates that the death toll among activists has doubled over the past decade to more than two a week. Brazil, Colombia, Peru, and the Philippines are the most dangerous places for activists, the organization says, but it notes that in parts of Africa many deaths never reach international attention.

Is Sombath Somphone destined to join them? The 60-year-old Laotian has had an illustrious career in development work, including consulting for UNESCO. Sixteen years ago, he founded the Participatory Development Training Center (PADETC), which uses education to encourage farmers, fishers, and others, particularly rural women, to participate in government and natural resource management. 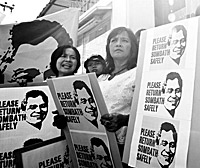 Protesters call for information on Laotian activist Sombath Somphone, who has been missing since December. ASEAN YOUTH MOVEMENT

His approach has been explicitly Buddhist, and his 50-strong staff’s long-running projects have included everything from fish farming to recycling household waste. PADETC has had government recognition and support and finance from prestigious outsiders such as Oxfam, the European Union, and the McKnight Foundation, a family foundation based in Minneapolis. In 2005, Sombath was cited for the Ramon Magsaysay Award for social activists, often dubbed the Asian Nobel prize.

Sombath seems an unlikely enemy of any sensible government. He is by all accounts a conciliator and peacemaker, a community leader more than an activist. Yet on Dec. 15, his jeep was stopped by the police on the outskirts of Vientiane for what seemed to be a routine traffic check. As he spoke to the officers, someone else turned up on a motorcycle and drove away his vehicle. Then, moments later, a truck arrived, and two people got out and bundled him into the vehicle before driving away. All this was caught on CCTV. He has not been seen since.

State authorities say the kidnapping had nothing to do with them, and they know nothing about Sombath’s fate. But people who have seen the CCTV footage say it is hard to understand why the police did not intervene unless they were under orders not to. They believe the authorities must have been involved. And they believe the reason for sudden official antipathy to the gentle Buddhist community leader lies in a high-profile meeting that he co-chaired two months earlier.

Authorities in Laos say the kidnapping of Sombath Somphone had nothing to do with them.

The event was called the Asia-Europe People’s Forum. It took place just before Laos played host to a summit of heads of state from Europe and
Asia. It was approved by the Lao government and brought together rural citizens to discuss their problems. One session concerned land grabbing, and some delegates discussed the loss of their land to rubber planters from neighboring Vietnam and elsewhere. At which point, Lao security officials started recording the proceedings and afterwards reportedly intimidated outspoken villagers and visited their villages.

Several organizers of the event complained to the government about the intimidation and threats and brought the matter to the attention of the UN and foreign donor agencies. Those organizers included Sombath and Anne-Sophie Gindroz, the Laos director of the Swiss-based NGO Helvetas, which specializes in agricultural development. Gindroz told me she believed that the government’s intention all along was to use the forum to “identify, monitor and document everything which was said, written and done” by the individuals and organizations attending.

The angry reaction of the events’ organizers evidently embarrassed the government at a time when the world was watching. The official response was to escalate the dispute. On Dec. 7, Gindroz herself was accused of conducting an “anti-government campaign” and given 48 hours to leave the country. Then eight days later, Sombath disappeared.

Since then, other activists have fled Laos, fearing for their safety. Farmers and villagers who participated in the forum “are being investigated still to this day,” Gindroz says. Meanwhile, the U.S. State Department, fellow recipients of the Magsaysay award, and many others have pleaded with the Lao government to hunt for Sombath.

These calls may work. Gindroz says the Lao government is far from monolithic. Hardliners see people who stand up for themselves as a threat, but there are progressive elements too. If Sombath is still alive, then she believes international pressure is vital to ensuring his release. Right now, she says, “I have no clue on his whereabouts and whether he is safe or not. I only have grave concerns, and strong hopes.”