For the last few years, Richard Rant has agreed to let researchers introduce strips of wildflowers among the blueberry plants on his family’s farm in West Olive, Michigan. It’s part of an experiment to see if the wildflowers can encourage pollinating insects and, in a small way, begin to reverse the worldwide decline in beneficial insects. It’s also a pioneering effort in the nascent movement to persuade farmers to grow insects almost as if they were a crop. 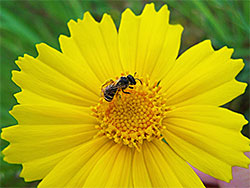 Native plants among crops can attract pollinators like this sweat bee on a calliopsis flower. ASHLEY BENNETT, MSU

That movement is being driven by news that is disturbingly bad even by gloomy environmental standards. Insects pollinate 75 percent of the crops used directly for human food worldwide. They contribute $210 billion in agricultural earnings. But honeybees are now so scarce, according to a new study from the University of Reading, that Europe is 13.6 million colonies short of the number needed to pollinate crops there. Nor can farmers count on natural pollinators as a backup system. A 2011 study sampled four North American bumblebee species and found that they have declined by as much 96 percent over the past century. In China, the loss of wild bees has forced farmers to hand-pollinate apple blossoms using paint brushes.

The broad decline in beneficial insects has also affected species we take for granted as part of our cultural heritage. Just last week, researchers announced that monarch butterfly numbers, already at record lows, once again fell by half in the annual count at overwintering sites in Mexico, with the iconic monarch migration now “at serious risk of disappearing.”

So far, the movement to get farmers to grow beneficial insects amounts, in the United States, to no more than a few hundred thousand acres of pollinator plantings, mostly subsidized by state and federal governments. Through its Natural Resources Conservation Service, the U.S. Department of Agriculture (USDA) now partners with the Xerces Society and other conservation groups to get the message out to farmers and help them with the technical issues of how to grow beneficial insects, and how to get paid for doing it. USDA also recently added a pollinator component to the farmland set-asides it pays for through its Conservation Reserve Program. Similar programs are also under way as part of the European Union’s “agri-environment” schemes, Australia’s Landcare program, and the United Nations International Pollinator Initiative.

A Michigan farmer has noticed that his new wildflower patches are humming with bees and other pollinators.

The experiment on Richard Rant’s blueberry farm — part of a research study by Michigan State University entomologist Rufus Isaacs — is an example of what can happen when such efforts work well. The study results are not expected to be published until later this year. But for Rant at least, planting for pollinators has seemed to work. He noticed that the wildflower patches were humming not just with bees and other pollinators but also with wasps, ladybugs, lacewings, and predacious beetles known to attack the sort of insect pests that damage blueberries. On his own, he started to add flowering cover crops — buckwheat, soybeans, mustard, alfalfa, and clover — in the 10-foot-wide gaps between blueberry rows, so that something nearby would be flowering throughout the growing season.

As fewer harmful insects turned up in his monitoring traps, Rant gradually cut back on spraying insecticides, from 10 or 12 times a season to as few as two or three in some years. The 80 percent saving on insecticides, he says, was easily worth $5,000-6,000 a year, “not even factoring in the labor and diesel for running the tractor.” He also cut by more than half the number of honeybee hives he needed to rent during the pollinating season — a big savings because rental prices have soared as honeybee populations have collapsed. Rant is now so hooked on the idea of farming insects that he wishes out loud for something to flower directly under his blueberries, so the beneficial insects wouldn’t have to travel as far.

But other farmers have not yet taken up the idea, and the acreage being protected or enhanced for beneficial insects is still trivial in the context of the global expansion and intensification of agriculture. In the United States, acreage protected by the Conservation Reserve Program, for instance, has continued to shrink dramatically, both because of congressional cost-cutting and because the federal mandate for ethanol fuel has driven up the price of corn and encouraged farmers to plow under their marginal land for row crops. Just from 2008 to 2011, according to a study by the Environmental Working Group, that expansion ate up 23.6 million acres of grassland, wetland, and shrubland — an area larger than Indiana — which used to produce beneficial insects naturally.

Monarch butterflies have lost 167 million acres of habitat across North America since 1996.

Add in the dramatically increased dependence on herbicides to eliminate weeds, and Orley R. “Chip” Taylor of the University of Kansas figures that monarch butterflies — the poster child of beneficial insects — have lost 167 million acres of habitat across North America since 1996. In many places, the milkweed they need to produce the next generation simply does not exist anymore.

Gary Nabhan, the Arizona ecologist and co-author of Forgotten Pollinators, argues that the U.S. public is willing to pay for the recovery of beneficial insects, even if Congress might not be. He cites a 2013 study in which Americans indicated that they were prepared to make household contributions that would total up to $6.6 billion just to protect the monarch butterfly migration. “But consumers, conservation advocates, and farm groups are still unclear on which mechanisms are the best way to invest in pollinators and other beneficial insects that affect their own food production and health.”

It can be expensive. Getting the right wildflower seed mix and preparing a site can cost as much as $1,500-2,000 an acre, according to Mace Vaughan, pollinator program director for Xerces. Depending on the state, government programs could pick up 50-75 percent of the cost, but that still requires a big investment by farmers.

Wildflower plantings aren’t the only technique available to farmers. At the University of California at Berkeley, research by Claire Kremen has demonstrated that hedgerows of native shrubs and wildflowers also produce a big bump in pollinator abundance and variety, with the effect spilling over 100 meters into adjacent fields. But getting to the break-even point for a hedgerow can take eight years, and only then can the farmer expect to see any gain. And that’s with government subsidies included, Kremen says. Some farmers are experimenting with simpler techniques — for instance, providing bamboo tubes, or boards with holes drilled into them, as habitat for leaf cutter bees, orchard mason bees, blue orchard bees, and other wild pollinators.

Polyculture, the opposite of monoculture, could also produce a broad recovery of pollinators, but it would require major changes in modern agriculture. It already works on a small scale in California’s Salinas Valley, says Kremen. Growers there are geared to supplying farmers’ markets and tend to “have a few rows of this, a few rows of that,” with maybe 20 different crops growing on a 10-acre plot. But that’s a much harder sell in California’s Central Valley, where large-scale intensive farming means there may be a crop flowering nearby one week, but no flowers for five miles in any direction two weeks later. So bumblebees and other native pollinators are scarce there. A practical solution might be to organize plantings of conventional crops in smaller contiguous zones, so that something is flowering nearby nonstop from spring through fall. But that would require adjusting the conventional pesticide regimen and rethinking a food distribution system that’s now geared to monoculture farming. And those kinds of changes are likely only if farmers see that profits depend on it.

Simply paying a farmer to produce pollinators doesn’t really engage him in conservation.

“What we need now,” says David Kleijn of the University of Waginengen, “are studies like the ones that [Michigan State’s] Rufus Isaacs is doing” with blueberry farmers, “showing that if farmers take up biodiversity schemes they will actually benefit from it, without the general public having to pay for it.”

Simply paying a farmer to produce pollinators doesn’t really engage him in conservation, says Kleijn. “But if he can show his neighbors that by improving habitat for pollinators on his land, he was able to increase his yield by five percent, that’s something he can brag about. We need to use these psychological aspects much more in the way we deal with biodiversity.”

Marketplace-driven incentives, like the “Conservation Grade” program in Britain could provide an alternative means of paying for pollinator recovery. The cereal company that runs that program pays farmers to set aside 10 percent of their land, and it stipulates a precise planting protocol for pollinator habitat, bird habitat, and so on. For their trouble, farmers get a markup on their crop and the buyer sells the product to consumers under a premium wildlife-friendly label.

But so far, those kinds of programs seem to function only on a limited boutique scale. It will take some far more ambitious enterprise to face up to what has become a global challenge.

“This is really different from other things conservationists have encouraged the public to do in the past,” says Gary Nabhan. “It’s not like saving pandas or gray whales. It’s not about pristine habitats. It’s more nuanced and complex. It’s about interactions and ecological relationships, not just species: You can’t save monarch butterflies without saving milkweeds. So people don’t immediately get it.”

Some people, particularly farmers, may struggle just to conceive of the words “beneficial” and “insect” together in a sentence. In that sense, says Nabhan, getting farmers and the general public engaged in pollinator recovery could be a turning point for the conservation movement, and even more so for modern agriculture.