The widespread publicity surrounding a seeming wonder-plant called Jatropha curcas began in earnest in the mid-2000s. A good-news story, it went like this: In the mildly toxic, oval-shaped, oily seeds of this hardy, shrubby tree was a near-miraculous source of biofuel. Since jatropha could grow on arid, barren lands, cultivating it would avoid displacing food crops such as corn and soybeans — a major drawback of so-called first generation biofuels. The world’s thirst for combustible fuels could be slaked, according to the buzz surrounding jatropha, with energy harvested from wastelands rather than from fertile fields.

Native to Central America and well-adapted to the tropics and subtropics, jatropha seemed a boon for the very places with some of the highest rates of poverty and plenty of hot, dry lands: the global south, from Latin America to Africa to Asia. Not only was the cultivation of jatropha supposed to absorb more CO2 from the atmosphere than it released, but the miracle tree could also stabilize and restore degraded soils. That’s surely why Scientific American in 2007 called jatropha “green gold in a shrub,” a plant that “seems to offer all the benefits of biofuels without the pitfalls.”

Fast forward a couple of years. By 2009, governments from China to Brazil, along with several major biofuel companies, had planted — or vowed to plant — millions of acres of jatropha. In India alone, the government has announced plans to subsidize an intensive program to plant jatropha for biofuels on 27 million acres of “wastelands” — an area roughly the size of Switzerland. And the jatropha push is on in other countries such as Myanmar, Malaysia, Malawi, and Brazil.

Despite all this, however, it’s not at all clear that jatropha will ever be the green gold it’s been cracked up to be. In fact, no one yet seems to know for sure if the kind of large-scale jatropha plantations that would make a real dent in world fuel demand can actually be productive, while also avoiding the problems associated with growing corn, sugar cane, and soybeans for biofuel.

Today, most jatropha grown for biofuels is cultivated on plots of less than 12 acres and is primarily used locally. A global biofuels market for jatropha 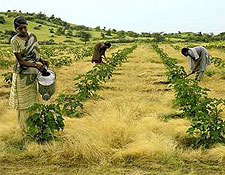 In India, the government will subsidize an intensive program to plant jatropha for biofuels on 27 million acres of “wastelands.”

is only just beginning to emerge. One of the handful of companies involved in large-scale jatropha production is D1 Oils, a U.K.-based biofuels technology company that says it already has more than a half-million acres under cultivation, much of it in India. A 2008 report by jatropha producers said that 242 cultivation projects existed globally, growing the tree on 2.2 million acres; by comparison, Brazil alone grows sugarcane for ethanol on 7.2 million acres of land.

A key issue surrounding jatropha is the productivity of the tree in the dry, degraded lands on which it is said to thrive. Rob Bailis, an assistant professor at the Yale School of Forestry & Environmental Studies, along with Yale Ph.D. candidate Jennifer Baka, recently launched the first detailed “life cycle” environment assessment of jatropha as a biofuel. Although their study is in its early stages, Bailis notes that it’s already clear that, while jatropha can indeed grow on lands with minimal water and poor nutrition, “if you plant trees in a marginal area, and all they do is just not die, it doesn’t mean you’re going to get a lot of oil from them.”

“If you grow jatropha in marginal conditions, you can expect marginal yields,” says Vincent Volckaert, the Africa regional director for D1.

And there’s the rub, says Bailis. “If you grow it in better agricultural conditions, all the alarm bells go off as you get into the same food-versus-fuel debate we’ve seen with [biofuel from] corn.”

Although it may still be early in the jatropha story, some of those alarm bells have already sounded.

Consider India’s great push to plant jatropha. According to the Indian environmental group, Navdanya, government foresters have drained rice paddies in order to plant jatropha in the poor and mostly tribal state of Chhattisgarh. As early as mid-2007, protests broke out in the mostly desert state of Rajasthan over a government scheme to reclassify village commons lands — widely used for grazing livestock — as “wastelands” targeted for biofuel production, primarily jatropha.

On Mindanao, the second-largest of the Philippine islands, protests erupted in late 2008, with indigenous leaders insisting that jatropha plantations had begun to displace needed crops of rice, corn, bananas, and root vegetables.

For jatropha to reach wonder-plant status, it must be grown on a scale far beyond the village level.

A striking symbol of jatropha’s pitfalls can be found in Myanmar, formerly Burma. Late in 2005, Myanmar’s military dictatorship — newly enamored with what’s been called “the biofuel tree ” — ordered all of that nation’s states and other political divisions to plant about a half-million acres each. In a predominantly agrarian country where child malnutrition is rampant, entire plantations have sprung up where food crops once grew. Under the threat of imprisonment, households have been forced to buy seed and plant jatropha in backyard gardens. Human rights groups report that teachers and their pupils, along with medical and government workers, have all been pressed into service to plant jatropha.

Yet according to scattered stories that have leaked out of a country generally closed to the foreign news media, the same government that infamously bungled its response to a devastating May 2008 typhoon did not have the foresight to build adequate infrastructure to mill the jatropha seeds or process them into biofuel. The seeds — grown at the expense of food crops — were left to simply rot on the ground.

It’s not all bad news. In the West African nation of Mali, on the southern edge of the Sahara, jatropha had long been grown as a sort of living fence to keep wildlife from crops, and sometimes as a source of handmade soap. In recent years, often with the help of nonprofit groups like the Denmark-based charity Folkecenter, local jatropha processing mills have appeared in hundreds of villages, providing fuel for lamps, cookstoves, and generators. The biofuel is not only cheaper than conventional oil and diesel, but it is available during rainy seasons, when impassable roads can block conventional fuel delivery. Even the solid “press cake” left over after the oil is squeezed out of the seeds has value as either an organic fertilizer or, if processed to neutralize the natural toxicity, animal feed.

But for jatropha to reach wonder-plant status — to make even a meaningful dent in a world that presently consumes 80 million barrels of oil every day — the tree would have to be grown on a scale far beyond the village level. Jatropha’s potential was recently underscored by highly publicized jet test flights using a mix of jatropha and other biofuels. Boeing reported that at altitudes where fuels must last hours at sub-zero temperatures, the jatropha/biofuel mix not only performed well, but actually had a higher freezing point than conventional jet fuel. Jatropha fuel also contains more energy per gallon, meaning less fuel weight has to be lifted off the ground. In March, Boeing officials told a Congressional hearing that they were “very confident” that jet fuels from plants such as jatropha could power their planes in a low-carbon future.

Science must sort out whether jatropha can be grown on a mass scale that makes it preferable to food-based biofuels.

In an early 2008 test, Virgin Airlines flew a jet from London to Amsterdam powered with a dollop — about five percent — of a similar biofuel, this one made from coconut oil. Never mind that the British magazine, New Scientist, calculated that it could take 150,000 coconuts to fully power even that short flight. Virgin CEO Richard Branson suggested that jatropha grown on arid soils could be the ticket for a green-fueled aviation industry, whereupon New Scientist calculated that it would take land twice the size of France to grow enough jatropha to power the world’s jet fleet. (Dramatic boosts in yields could improve that equation.)

If jatropha is to be grown on an industrial scale, the plant will need to be tamed and cultivated, and its oil yields vastly enhanced through conventional plant breeding or genetic manipulation. A San Diego start-up company, SG Biofuels, says it has amassed the world’s most complete library of jatropha genetic material and, with a cadre of scientists on its staff, believes it is on the way to quadrupling oil yields from 200 gallons per acre to 800 gallons per acre. A comparable boost in yields came after rubber trees were domesticated.

Even if enterprises like SG and D1 Oils can push the genetic envelope enough to make jatropha profitable, will the world actually be able to benefit from growing and processing the plant on a large scale? The jury’s still out. Yale’s Bailis says his life-cycle study still hasn’t established that jatropha biofuel will ever be “carbon positive,” meaning that growing the plant absorbs more CO2 from the air than it releases. He says he suspects that it can be, but he also points out that if cultivating the plant means leveling forests or plowing up native vegetation, large volumes of carbon would be released, possibly canceling out any benefits.

The best outcome might be to slow down the jatropha steamroller and let science sort out whether it can be grown on a mass scale in ways that make it preferable to food-based biofuels. If not, it may turn out that the world will still have to wait for a second generation of truly viable biofuels.