The wind turbines that increasingly dot the landscape peak at around 300 feet above ground, with the massive blades spinning a bit higher. The wind, however, does not peak at 300 feet. Winds are faster and more consistent the higher one climbs, maxing out in the jet streams at five miles and above.

With conventional wind power facing a litany of obstacles — intermittency, space requirements, not-in-my-backyard complaints — pushing wind power up into the atmosphere could take a lot of uncertainty out of the equation. And despite a host of technical and regulatory challenges, a growing number of small companies are working hard to get up there within the next few years, with numerous designs and ideas aimed at harvesting wind power high in the sky.

“The potential is incredibly high,” says Cristina Archer, an associate professor of ocean science and engineering at the University of Delaware. Archer and a colleague published one of two recent detailed analyses of the total energy that could be extracted from the planet’s winds to generate electricity. The other was conducted by well-known climate scientist Ken Caldeira of the Carnegie Institution and Stanford University. Both found an effectively unlimited supply of power, with vastly more available as one moves up away from the ground. 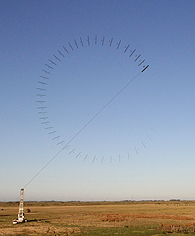 Makani Power
A fixed-wing aircraft being developed by California-based Makani Power rotates at variable altitudes while tethered to a generator.
But Caldeira and others say that while they see enormous long-term potential in airborne wind, the engineering and regulatory challenges are formidable, particularly if companies want to tap into powerful jet stream winds.

“I would be reluctant to remortgage my house and invest the money in these companies, because I think the probability of them being able to compete in the marketplace at scale in, say, the next decade is pretty small,” he says. Nevertheless, he believes that given both its enormous possibilities and the various hurdles it faces, the airborne wind industry is an ideal candidate for public research and development support.

The questions surrounding airborne wind are significant. How do you safely suspend airborne turbines hundreds or thousands of feet off the ground? How do you keep them aloft for long periods of time in high winds without having to perform frequent, costly maintenance? And what about interference with aviation?

Proponents say, however, that in some ways high-altitude wind power could end up being easier to deploy — and cheaper — than traditional wind energy. Construction costs will be markedly diminished with no need for giant steel and concrete towers, and there will be no need for the yaw mechanism that keeps standard turbines facing into the wind as wind direction changes.

Instead, the basic premise of airborne generation is to tether a device to the ground and let it fly around in the strong winds like a kite, either generating power and sending it down a tether to the ground or using the tether itself to produce electricity at its base. The specific devices on the

The basic premise is to tether a device to the ground and let it fly around in strong winds, generating power.

end of the tether vary widely in design. Terrestrial windmill design is largely settled; but up in the sky, it seems like anything goes. There are rigid, carbon-fiber wings outfitted with multiple small turbines; softer kite-like devices that fly in figure-eights and generate power by coiling and uncoiling a tether; devices that resemble a blimp rotating around a horizontal axis; and several other concepts. No consensus exists on an optimal design, though some may be better suited for utility-scale wind farms while others may fit smaller, niche-market applications.

One company that seems close to deployment is Makani Power, based in Alameda, California. Makani’s tethered rigid wing has been through seven development iterations and numerous test flights in six years, and the latest prototype can generate 30 kilowatts of power. With close to $20 million in funding from Google and the Department of Energy’s Advanced Research Projects Agency-Energy (ARPA-E), Makani hopes to build a 92-foot wingspan version rated at 600 kilowatts, which could supply power to about 150 households.

Corwin Hardham, the founder and CEO of Makani, says the company has interest from developers and could start building airborne wind farms within a few years. Farther in the future, Hardham hopes his company can build a 5-megawatt behemoth version, with a 213-foot wingspan best suited for offshore use.

“That’s where our approach really shines, offshore,” Hardham says, adding that he thinks Makani could eventually produce power at 6 cents per kilowatt-hour at offshore installations. That’s far cheaper than current offshore wind power in Europe and would make it extremely competitive with power produced from coal and natural gas.

Magenn Power Inc.
Magenn Power’s helium-filled, blimp-like structure floats 1,000 feet up, and the entire balloon spins around a horizontal axis as the wind blows past.
Another company close to actual wind farm development is Ampyx Power, based in the Netherlands and spun out of research at Delft University. Ampyx’s PowerPlane is a glider that generates electricity by pulling on its tether, which is connected to a ground-mounted generator. The PowerPlane glides around between 1,000 and 2,000 feet; the next iteration of this design should generate 250 to 500 kilowatts continuously, says founder Richard Ruiterkamp.

“We’ve been flying autonomously now for about a year,” Ruiterkamp says. “Before the end of the year we will have the full cycle up and running for a number of hours.” The next hurdle, he says, is to operate for multiple days consecutively without human intervention. Ampyx says it expects construction on a wind farm to begin within several years.

Two companies with dramatically different ideas are California-based Magenn Power and Boston-based Altaeros. Magenn’s helium-filled, blimp-like structure floats 1,000 feet up, and the entire balloon spins around a horizontal axis as the wind blows past. This technology is about as bird-friendly a design as one could imagine, with no spinning blades, and has undergone successful test flights.

Altaeros, meanwhile, also uses a helium-filled device, though to quite different effect. The balloon shell surrounds the blades and hub of a standard turbine in the center, basically serving to lift a normal windmill 1,000 feet off the ground. The company says it successfully tested a prototype earlier this year, and reports that the turbine generated twice the power at 350 feet as the same turbine did at standard heights of about 100 feet.

These inflatable designs, along with soft-wing kite designs like that made by North Carolina-based Windlift, may end up being most suitable for off-grid, remote applications, given their easy transportability and quick set-up times, wind industry executives say.

“We’re working on small distributed systems rather than big utility-scale systems,” says Andy Stough, the vice president of engineering at Windlift. The company receives substantial funding from the U.S. Marine Corps, which hopes to power bases in remote locations with the soft-wing kite

Without strong government support, installing even one gigawatt of airborne power could take 20 years.

design instead of the expensive and sometimes hazardous necessity of trucking in or airlifting diesel fuel for generators.

The Windlift kite involves a 40-square-meter wing flying at a maximum altitude (for the moment) of 500 feet, with the controls and generator on the ground. Beyond the Marine Corps, Stough says anything involving remote power needs — off-grid mobile communications, disaster relief, and so on — could be a good candidate for these types of airborne wind systems. A German company called EnerKite uses a similar design and may be even closer to deployment; both companies have conducted successful test flights in recent years.

P.J. Shepard, co-founder of an industry group called the Airborne Wind Energy Consortium, says the progress toward working, power-generating prototypes has been impressive in the last few years. “Some [companies] have proven energy-generation capability, many have demonstrated some level of autonomous control, and a few are planning… power farm development,” she says.

But scaling up past the prototype stage won’t be easy. Experts in the industry think that without strong government support, installing even one gigawatt of airborne power (50 GW of standard, terrestrial wind are already installed in the U.S.) could take 20 years or more, an eternity when drastic emissions reductions are the goal. With a relatively modest government investment of $100 million per year, that one gigawatt goal could be attained in fewer than 10 years, wind industry executives say. Some larger companies such as Honeywell and 3M have shown some interest, but the major traditional wind power developers — Siemens, GE, Vestas, and others — have so far left the airborne designs to the startups.

Without major investment, some of the specific engineering challenges may be difficult to overcome. According to an industry survey by the nonprofit energy analysis group Near Zero, the biggest remaining issue is reliability: In order to be viable, airborne devices would need to stay aloft for long periods of time with little maintenance required.

When it comes to really taking advantage of higher altitude wind, Caldeira points out that reaching as high as the jet stream is the real prize. The

Reaching up into the powerful winds of the jet stream is the real prize.

power density in Earth’s jet streams is around 100 times that of sunlight hitting a standard photovoltaic cell. “The fact that there is no other renewable energy source available in abundance with such high power densities says to me that we should have a research program trying to exploit it,” Caldeira says. But the differences in engineering requirements between flying a device at 1,000 feet and at five or six miles are enormous.

Outside of R&D issues, another huge challenge is regulation. What, exactly, is a 80-foot-wide device, tethered to the ground, flying circles 1,000 feet up in the air? Is it an airplane? A “building” or “obstacle”? There is no clear regulatory framework for the industry, though in 2011 the U.S. Federal Aviation Administration did begin a process meant to include airborne wind systems in their governing structure. For the moment, this will limit testing to 499 feet of altitude, meaning the jet streams are still far out of reach.

“There is no way you can operate without some form of official approval from the authorities,” Ruiterkamp of Ampyx says. But he warns against trying to create a new regulatory framework from scratch, either in the Netherlands where his company is based, or in the U.S. “If you have to set this up all by yourself as an industry, it might take 15 years and there is no guarantee what the outcome will be,” Ruiterkamp says. He thinks that convincing authorities to work within the existing regulatory environment for manned and, increasingly, unmanned aircraft is the best approach.

After a decade seeking approval to build the U.S.’s first offshore wind farm, Cape Wind president Jim Gordon is on the verge of beginning construction. In an interview with Yale Environment 360, he describes why his struggle has been good for clean energy — and why the fight is still not over.
READ MORE
Safety and related regulations are not trivial concerns. That 5-MW Makani device that’s in the works? Its 213-foot wingspan is about the same as that of a Boeing 747. If something that big breaks its tether and hits the ground, it poses obvious dangers. Even the M600 is roughly the same width as the wingspan of a Boeing 737. Clearly, if industrial-scale farms are coming that feature these mammoths flying around at the end of 1,000-foot tethers, it can’t happen without strict regulatory control.