When the King Mountain Wind Ranch was built in 2001 south of Odessa, Texas, it was the largest wind project in the world, with 214 turbines capable of generating 278 megawatts of electricity.

Fourteen years later, the company that constructed King Mountain, RES Americas, has developed a total of 15 wind farms in Texas capable of generating about 2,200 megawatts of electricity — enough to power about 600,000 homes under average wind conditions. The developer has yet another wind farm currently under construction, all because the windswept Texas prairie “provided a great natural resource and Texans were supportive of wind energy,” says Chad Horton, vice president of development for RES Americas.

The steady expansion of RES Americas in Texas mirrors a surge in wind energy production in a state better known for its oil and gas booms, its conservative politics, and its skepticism about human-caused climate change than for its flourishing renewable energy sector. As it turns out, though, Texas now leads the United States in wind power production.

In 2014, wind generated 10.6 percent of Texas electricity, up from 9.9 percent the previous year and 6.2 percent in 2009, according to the U.S Energy Information Administration. Wind energy generation that falls under the Electric Reliability Council of Texas (ERCOT), which manages the grid for 24 million Texans, nearly doubled from 2009 to 2014. Currently, Texas has more than 12 gigawatts of wind power capacity installed across the state — equivalent to six Hoover Dams. That figure could jump to 20 gigawatts in a few years with upgrades to the current transmission system, according to Ross Baldick, an engineering professor at University of Texas at Austin.

“I don’t think any state has been quite as fast at blowing past their [wind power] goals as Texas has,” says Nathanael Greene, director of renewable energy policy for the Natural Resources Defense Council.

So how has the Lone Star state done it? Strong government incentives, sizeable investments in infrastructure, and innovative policies have played an important role. So has the backing of governors of all political persuasions, from liberal Democrat Ann Richards to conservative Republican Rick Perry. But at heart the profit motive has driven the state’s wind energy boom, with ranchers and landowners seeing gold in the spinning turbines on the Texas plains.

“We rarely talked about the environment,” recalls Michael Osborne, co-founder of the Texas Renewable Energy Industries Alliance (TREIA) and developer of the state’s first wind farm in the early 1990s. “We talked about farmers and ranchers getting rich on windmills.” 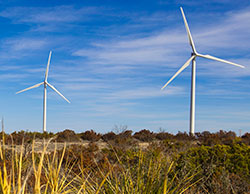 The Sherbino Wind Farm on the plains of West Texas, where wind power has boomed. BP

Texas has six of the ten largest wind farms in the nation, including three of the top five, according to the U.S. Energy Information Association (EIA). About 220 miles west of Dallas, the Roscoe Wind Farm is the state’s largest wind complex, its 627 turbines — spread across 100,000 acres — capable of producing enough electricity to power 265,000 homes. The Horse Hollow Wind Energy Center, located near Abilene, has erected 421 turbines in three phases and is capable of generating enough electricity to power 221,000 homes. Some of the largest wind-producing counties include Hansford and Nolan in the interior and Willacy and Kenedy counties on the coast of the Gulf of Mexico.

In various parts of the state, massive wind turbines dot the landscape. Many of them are located on farms and ranches, with landowners going about the business of plowing and planting in the shadow of the turbines. A network of recently constructed, 130-foot transmission towers and transmission lines traverse the state’s pastures and scrub land.

Major developers range from Texas-based wind companies — such as Austin-headquartered Cielo Wind Power and Dallas-based Tri-Global Energy — to large power companies, such as Duke Energy, Shell, and Germany-based E.ON, which constructed the Roscoe Wind Farm in 2009.

Proponents argued that incentives and goals are needed for wind, ‘because it can make money.’

The Texas wind industry got its start in West Texas, where environmental and industry groups such as TREIA were the first to make the case for renewables in the 1990s. But Roger Duncan, a board member of the Alliance to Save Energy and former general manager at Austin Energy, said the wind industry really picked up momentum because of grassroots support.

“The political movement came from the West Texas power base, with farmers and ranchers and county judges out there,” says Duncan. “That is the power base that went to the Texas legislature and said ‘We need incentives and goals for wind, because it can make money.’” Counties and school districts joined the political movement when they learned of the increase in property tax revenues that came with wind turbines sited on ranches and farms.

A major leap forward for Texas’ wind industry came in 2005 when Governor Perry and the state legislature approved the $7 billion Competitive Renewable Energy Zone initiative, a 3,600-mile network of transmission
lines. The project made it possible to move the electricity from the wind farms in West Texas and the panhandle to the bigger markets, including the population centers along the Interstate-35 corridor, such as Dallas/Fort Worth and San Antonio. The timing was serendipitous, with the state Public Utility Commission approving the transmission lines a year before the global financial crisis hit in 2007 and 2008, according to Carey King, assistant director of the Energy Institute at the University of Texas at Austin.

These developments, coupled with the promise of profits for landowners, led farmers and ranchers to lease their land for wind turbines and allow transmission lines to cross their properties.

Today, Texas’ wind energy sector continues to grow, spreading from West Texas to the Gulf of Mexico, where some developers are building on-shore wind farms along the coast — such as the Gulf Wind farm in Kenedy County — and contemplating offshore wind farms. New wind farms now under construction in the Texas panhandle will have a capacity of at least 2,200 megawatts when they begin scheduled operations by 2017. One positive trend that could continue to boost the state’s wind energy production is the first national wave of “repowering,” in which wind energy companies replace older turbines with larger, more efficient turbines that can generate considerably more energy.

But analysts warn that the Texas wind energy sector could be facing a lull as the last projects are completed under the federal wind tax credit, which expired at the end of 2014. Osborne describes the federal tax credit as an equalizer that helped put wind and solar on the same playing field as the oil and gas industry, which receives generous tax credits. “If you put everyone on an unlevel playing field that does kind of tend to make the marbles roll to one side,” says Osborne.

The Lone Star State’s success has come to the attention of other states and Canadian provinces.

Today, the wind energy industry is eyeing expansion along the state’s coast and offshore in the Gulf of Mexico. One hurdle, however, is the mortality that turbines could inflict on the high populations of migratory birds found along the Gulf coast.

Blessed with lots of sun and keen to cut its reliance on imported oil, Hawaii has moved to the forefront of residential solar installations in the U.S. But financial and technical hurdles are slowing the state’s drive to generate 40 percent of its electricity from renewable energy by 2030. READ MORE

Still, the Lone Star state’s success has come to the attention of other states and Canadian provinces seeking to expand their renewable energy industries. During a three-day visit last year to Alberta, home of the giant tar sands industry. Osborne told his audiences that innovative policies, bipartisan support, and committed entrepreneurs can give birth to a robust wind power sector.

“We see a real opportunity for Alberta to learn from what Texas has done,” said Dan Woynillowicz, a policy director at Clean Energy Canada.