At 3 p.m. on a Friday last January, two days before the 2014 Super Bowl, the State Department released a favorable assessment of the proposed Keystone XL pipeline’s environmental impacts. Though citizens had submitted nearly two million comments during consideration of the report, the timing suggested officials hoped most people would be focused on football. 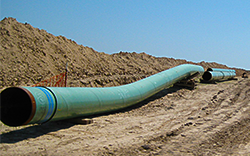 Pipeline laid near Swanton, Nebraska, in an early phase of the Keystone project in 2009. WIKIMEDIA COMMONS

Events since then have made the State Department’s reluctance to draw attention to its assessment look like the right strategy. The report’s assumptions about oil prices and alternatives to Keystone XL have been thoroughly undermined, and prospects for continued expansion of the tar sands, the vast Canadian oil deposit that the pipeline would link to refineries on the Gulf of Mexico, have significantly declined.

Despite this, leaders of the new Republican-controlled Congress this week pushed forward legislation that would force approval of Keystone XL, and they expected both houses to pass it this month. Congressional action was moving ahead even though the White House announced on Tuesday that President Obama would veto the legislation.

Yet during the past year, the case for the pipeline has developed huge cracks. In giving Keystone XL a pass on its environmental impacts — a step toward final approval — the State Department’s Bureau of Oceans and International Environmental and Scientific Affairs had argued that the pipeline would not generate increased greenhouse gas emissions because tar sands expansion is inevitable. If Keystone isn’t built, the report assumed, other pipelines from the tar sands would be, and railroads would provide additional capacity. These conclusions reaffirm one of the oil industry’s hoariest — and, historically speaking, largely accurate — maxims: Oil always finds a way to market.

But the maxim may not apply to tar sands crude.

Since declaring in 2006 that his country was an “emerging energy superpower,” Canadian Prime Minister Stephen Harper has staked his administration on developing Alberta’s tar sands — a bucket of bitumen nearly the size of Florida that constitutes the world’s third-largest crude oil deposit. With encouragement from the Canadian government, as long as a decade ago pipeline companies began planning four major pipelines that would connect the landlocked tar sands to ports and refineries on the Gulf of Mexico and the Atlantic and Pacific oceans. Back then, pipelines were rarely controversial, and the planners expected easy paths to construction. Instead, they have faced a blizzard of political opposition, lawsuits, adverse court decisions, and civil disobedience, to the point that all four pipelines now face substantial odds against completion.

The old maxim that oil always finds a way to market may not apply to tar sands crude.

In June, a vital ruling by Canada’s Supreme Court strengthened land rights of Canada’s indigenous groups, known as First Nations. Even more than environmentalists, First Nations provide the backbone of opposition to the pipelines in Canada, and the three proposed Canadian pipelines would wend through hundreds of First Nations territories. The decision instantly set back Northern Gateway, a $6.5 billion, 731-mile pipeline that would carry up to 525,000 barrels of oil a day from Alberta to the heart of First Nations opposition on the British Columbia coast. Even though Northern Gateway has already secured the federal government’s approval, its prospects of winning a go-ahead in British Columbia are considered bleak. A $5.4 billion proposal to triple the capacity to 890,000 barrels a day of Trans Mountain, a pipeline that runs from Alberta to the British Columbia coast, also faces growing opposition.

Resistance to both pipelines is so strong that even the Canadian government, previously the most ardent supporter of the projects, has seemed to back away — a stunning development for an administration that has pinned its fate to the tar sands. “We’ve done everything we can in a responsible way,” federal Industry Minister James Moore, who is a native of British Columbia, said last month. “It’s up to the [pipeline] firms to deliver on these projects.”

Without opposition, Keystone’s 830,000-barrel capacity would have become operational by 2012.

Energy East, the biggest proposed pipeline of all, would carry 1.1 million barrels a day of tar sands crude all the way to refineries on the East Coast, a distance of 2,850 miles. In addition to facing intense opposition from some of the 180 First Nations it would pass through, the project must satisfy seven stringent conditions laid down in November by the premiers of Ontario and Quebec. One requires TransCanada, the pipeline’s owner, to address climate change induced by tar sands emissions — a subject the Harper government has done everything in its power to avoid, including by suppressing scientific inquiry into climate change.

As for Keystone XL, the approval of which Harper called a “no-brainer” three years ago, even if quickly authorized by the new GOP-controlled Congress, it now faces a veto from Obama that Republicans would need to muster the votes to override. In his most recent comments on Keystone, at a press conference on December 19, Obama said the pipeline “is not even going to be a nominal benefit to U.S. consumers.” And on “The Colbert Report” earlier in the month, he said the pipeline’s modest pluses needed to be weighed against its impact on climate change, “which could be disastrous.”

Even railroads, touted a year ago as a solution to the tar sands’ transportation woes, are presenting oil companies with a new set of problems, from a tank car shortage and limited unloading facilities to spectacular derailments. In addition, rail transport adds another ten dollars per barrel or so to the already steep cost of tar sands oil.

Without opposition, Keystone’s 830,000-barrel capacity would have become operational in 2012, and Northern Gateway would already be under construction. Instead, tar sands oil has run into a bottleneck, with developers increasingly anxious to find outlets. Shipping constraints and higher costs led oil companies to suspend three major tar sands projects this year, and many other companies reduced capital expenditures. Oil Change International, a clean-energy advocacy group, estimates that between 2010 and 2013, tar sands developers lost $30.9 billion because of the loss of markets for their oil and competition from lower-priced light crude. Of that figure, Oil Change International claims, more than half can be directly attributed to the success of anti-pipeline campaigns.

The decline in oil demand in the U.S. is likely to continue for a range of reasons.

All this happened before tar sands developers received an even bigger blow: the collapse in the last six months of world oil prices. Tar sands crude requires an assortment of energy-intensive processes that make it among the most expensive of the world’s crudes to produce. Operations were already slowing when oil cost more than $90 a barrel, but this week its price fell below $50, far below the tar sands projects’ break-even point. If oil prices stay low, Keystone XL loses all financial rationale.

The news for tar sands developers could get worse still. While the arrival of “peak oil” — the date at which global oil supplies begin to decline — has been indefinitely postponed by the advent of hydraulic fracturing, the United States reached peak oil demand in 2005. The decline in demand in the U.S. is likely to continue for a range of reasons. Electric cars and hybrids are becoming more popular, and gasoline cars are using fuel more efficiently. Americans are tapping more and more renewable sources of power such as wind and solar. Baby boomers, formerly enthusiastic car drivers, are retiring, and young people are driving far less.

Most ominous for tar sands producers, the announcement in November of an agreement on cutting carbon emissions between Obama and Chinese President Xi Jinping has raised hopes that a forceful international climate treaty can at last be negotiated, perhaps at the Paris climate change conference in December 2015. If that happens, tar sands developers presumably would try to gallop toward the finish line, seeking to extract a maximum amount of crude before the pact goes into effect.

Instead of becoming the beating heart of a North American energy superpower, the tar sands now stand poised to become a different kind of symbol. Whereas once they stood for oil production at its most excessive (with high rates of greenhouse gas emissions, massive water and soil pollution, and energy inefficiency), that notion is being turned inside out: The tar sands soon may represent a pioneering victory in combating climate change, on the first major battlefield where concern over the globe’s future overrode oil revenues.

The tar sands may soon represent a pioneering victory in combating climate change.

The struggle has already taught climate change campaigners a lesson. They have tried for a couple of decades to persuade governments to agree to substantial percentage reductions in greenhouse gas emissions by a certain remote date, without much success. The goals were vital but intangible and abstract, not exactly fodder for rallying cries. But people can envision a piece of infrastructure like a pipeline and the dangers it poses along its route. In fact, the core of opposition to the tar sands pipelines hasn’t revolved around climate change, but rather fear of leaks and their impacts on soil, waterways, and aquifers.

“Instead of big groups of scientists going to local communities and saying, ‘You should be worried about climate change,’ farmers in Nebraska and First Nations fishermen in northern British Columbia started their own campaigns,” Tzeporah Berman, a prominent Canadian environmental strategist, told me. “What we’re seeing is a new climate movement with frontline communities at the forefront. That’s much stronger, with broader civil society engagement than we’ve ever had before.”

All this has increased what’s at stake in President Obama’s decision on Keystone. Approval would hand a lifeline to a reeling segment of the oil industry; rejection would give the anti-fossil-fuel movement its biggest victory.

As debate over the Keystone XL and other pipeline projects continues, crude oil from the Alberta tar sands and western U.S. oil fields is increasingly being hauled by railroad. Critics warn that this development poses a threat not only to the environment but to public safety.READ MORE

Last summer Obama told a journalist that “there is no doubt that if we burned all the fossil fuel that’s in the ground right now that the planet’s going to get too hot and the consequences could be dire.” If, despite that, he still harbored any lingering doubts about blocking Keystone, the Intergovernmental Panel on Climate Change, which represents the views of hundreds of climate scientists, issued an assessment in November that should have helped him make a decision. It reported that to keep global temperatures from rising more than 3.6 degrees Fahrenheit above pre-industrial levels (a consensus goal that increasingly appears too soft to prevent catastrophic climate change), from three-quarters to six-sevenths of the world’s proven fossil fuel reserves must remain in the ground. Inclusion of the huge deposits of tar sands crude in this category is the real no-brainer.