The reports from the Intergovernmental Panel on Climate Change (IPCC) are balanced and comprehensive documents summarizing the impact of global warming on the planet. But they are not without imperfections, and one of the most notable was the analysis of future sea level rise contained in the latest report, issued in 2007.

Given the complexities of forecasting how much the melting of the Greenland and West Antarctic ice sheets will contribute to increases in global sea level, the IPCC chose not to include these giant ice masses in their calculations, thus ignoring what is likely to be the most important source of sea level rise in the 21st century. Arguing that too little was understood about ice sheet collapse to construct a mathematical model upon which even a rough estimate could be based, the IPCC came up with sea level predictions using thermal expansion of the oceans and melting of mountain glaciers outside the poles. Its results were predictably conservative — a maximum of a two-foot rise this century — and were even a foot lower than an earlier IPCC report that factored in some melting of Greenland’s ice sheet.

The IPCC’s 2007 sea level calculations — widely recognized by the academic community as a critical flaw in the report — have caused confusion among many in the general public and the media and have created fodder for global warming skeptics. But there should be no confusion about the serious threat posed by rising sea levels, especially as evidence has mounted in the past two years of the accelerated pace of melting of the Greenland and West Antarctic ice sheets. 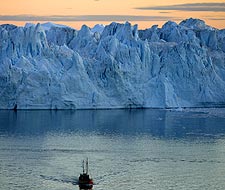 Getty Images
Most climate scientists believe melting of the Greenland Ice Sheet will be one of the main drivers of sea level rise during this century.

The message for the world’s leaders and decision makers is that sea level rise is real and is only going to get worse. Indeed, we make the case in our recent book, The Rising Sea, that governments and coastal managers should assume the inevitability of a seven-foot rise in sea level. This number is not a prediction. But we believe that seven feet is the most prudent, conservative long-term planning guideline for coastal cities and communities, especially for the siting of major infrastructure; a number of academic studies examining recent ice sheet dynamics have suggested that an increase of seven feet or more is not only possible, but likely. Certainly, no one should be expecting less than a three-foot rise in sea level this century.

In the 20th century, sea level rise was primarily due to thermal expansion of ocean water. Contributions of melting mountain glaciers and the large ice sheets were minor components. But most climate scientists now believe that the main drivers of sea level rise in the 21st century will be the melting of the West Antarctic Ice Sheet (a potential of a 16-foot rise if the entire sheet melts) and the Greenland Ice Sheet (a potential rise of 20 feet if the entire ice cap melts). The nature of the melting is non-linear and is difficult to predict.

The continued development of many low-lying coastal areas is foolhardy and irresponsible.

Seeking to correct the IPCC’s failure to come up with a comprehensive forecast for sea level increase, a number of state panels and government committees have produced sea level rise predictions that include an examination of melting ice sheets. For example, sea level rise panels in Rhode Island and Miami-Dade County have concluded that a minimum of a three- to five-foot sea level rise should be anticipated by 2100. A California report assumes a possible 4.6-foot rise by 2100, while the Dutch assume a 2.5-foot rise by 2050 in the design of their tidal gates.

Given the growing consensus about the major sea level rise on the way in the coming century or two, the continued development of many low-lying coastal areas — including much of the U.S. east coast — is foolhardy and irresponsible.

Who is at risk?

Rising seas will be on the front lines of the battle against changing climate during the next century. Our great concern is that as the infrastructure of major cities in the industrialized world becomes threatened, there will be few resources left to address the dramatic impacts that will be facing the citizens of the developing world.

The ramifications of a major sea level rise are massive. Agriculture will be disrupted, water supplies will be salinized, storms and flood waters will reach ever further inland, and millions of environmental refugees will be created — 15 million people live at or below three feet elevation in Bangladesh, for example. Governments, especially those in the developing world, will be disrupted, creating political instability.

The most vulnerable of all coastal environments are deltas of major rivers, including the Mississippi.

The most vulnerable of all coastal environments are deltas of major rivers, including the Mekong, Irrawaddy, Niger, Ganges-Brahmaputra, Nile, and Mississippi. Here, land subsidence will combine with global sea level rise to create very high rates of what is known as “local, relative sea level rise.” The rising seas will displace the vast majority of people in these delta regions. Adding insult to injury, in many parts of Asia the rice crop will be decimated by rising sea level — a three-foot sea level rise will eliminate half of the rice production in Vietnam — causing a food crisis coincident with the mass migration of people.

The Mississippi Delta is unique because it lies within a country with the financial resources to fight land loss. Nevertheless, we believe multibillion-dollar engineering and restoration efforts designed to preserve communities on the Mississippi Delta are doomed to failure, given the magnitude of relative sea level rise expected. Former Secretary of the Interior Bruce Babbitt said in 2008 that it was an “ineluctable fact” that within the lifespan of some people alive today, “the vast majority of that land will be underwater.” He also faulted federal officials for not developing migration plans for area residents and for not having the “honesty and compassion” to tell Louisiana residents the “truth”: Someday, they will have to leave the delta. The city of New Orleans can probably be protected into the next century, but only at great expense and with little guarantee that future storms like hurricane Katrina will not inundate the city again.

Pacific and Indian Ocean atoll nations are already being abandoned because of the direct and indirect effects of sea level rise, such as saltwater intrusion into groundwater. In the Marshall Islands, some crops are being grown in abandoned 55-gallon oil drums because the ground is now too salty for planting. New Zealand is accepting, on a gradual basis, all of the inhabitants of the Tuvalu atolls. Inhabitants of Carteret Atoll have all moved to Papua, New Guinea. The forward-looking government of the Maldives recently held a cabinet meeting underwater to highlight the ultimate fate of their small island nation.

The world’s major coastal cities will undoubtedly receive most of the attention as sea level rise threatens infrastructure. Miami tops the list of most endangered cities in the world, as measured by the value of property that would be threatened by a three-foot rise. This would flood all of Miami Beach and leave downtown Miami sitting as an island of water, disconnected from the rest of Florida. Other threatened U.S. cities include New York/Newark, New Orleans, Boston, Washington, Philadelphia, Tampa-St Petersburg, and San Francisco. Osaka/Kobe, Tokyo, Rotterdam, Amsterdam, and Nagoya are among the most threatened major cities outside of North America.

Preserving coastal cities will require huge public expenditures, leaving smaller coastal resort communities to fend for themselves. Manhattan, for example, is likely to beat out Nags Head, North Carolina for federal funds, a fact that recreational beach communities must recognize when planning a response to sea level rise.

Twelve percent of the world’s open ocean shorelines are fronted by barrier islands, and a three-foot sea level rise will spell doom for development on most of them — save for those completely surrounded by massive seawalls.

The next century of rising sea level need not be an economic disaster.

Impacts in the United States, with a 3,500-mile long barrier island shoreline extending from Montauk Point on Long Island to the Mexican border, will be huge. The only way to preserve the barrier islands themselves will be to abandon them so that they may respond naturally to rising sea level. Yet, most coastal states continue to allow massive, irresponsible development of the low-lying coast.

Ironically, low-elevation Florida is probably the least prepared of all coastal states. Hundreds of miles of high rises line the state’s shoreline, and more are built every year. The state pours subsidies into coastal development through state-run insurance and funding for coastal protection. If a portion of those funds were spent adapting to sea level rise rather than ignoring it, Florida might be ready to meet the challenge of the next century. Let’s hope the state rises to the challenge.

Despite the dire facts, the next century of rising sea level need not be an economic disaster. Thoughtful planning can lead to a measured retreat from vulnerable coastal lowlands. We recommend the following:

Immediately prohibit the construction of high-rise buildings and major infrastructure in areas vulnerable to future sea level rise. Buildings placed in future hazardous zones should be small and movable — or disposable.

Relocation of buildings and infrastructure should be a guiding philosophy. Instead of making major repairs on infrastructure such as bridges, water supply, and sewer and drainage systems, when major maintenance is needed, go the extra mile and place them out of reach of the sea. In our view, no new sewer and water lines should be introduced to zones that will be adversely affected by sea level rise in the next 50 years. Relocation of some beach buildings could be implemented after severe storms or with financial incentives.

Stop government assistance for oceanfront rebuilding. The guarantee of recovery is perhaps the biggest obstacle to a sensible response to sea level rise. The goal in the past has always been to restore conditions to what they were before a storm or flood. In the United States, hurricanes have become urban renewal programs. The replacement houses become larger and larger and even more costly to replace again in the future. Those who invest in vulnerable coastal areas need to assume responsibility for that decision. If you stay, you pay.

Get the Corps off the shore. The U.S. Army Corps of Engineers, more or less by default, is the government agency in charge of much of the planning and the funding for the nation’s response to sea level rise. It is an agency ill-suited to the job. Part of the problem is that the engineers’ “we can fix it” mentality is the wrong mindset for a sensible approach to responding to changing sea level.

Local governments cannot be expected to take the lead. The problems created by sea level rise are international and national, not local, in scope. Local governments of coastal towns (understandably) follow the self-interests of coastal property owners and developers, so preservation of buildings and maintaining tax base is inevitably a very high priority. In addition, the resources needed to respond to sea level rise will be far beyond those available to local communities.

Responding to long-term sea level rise will pose unprecedented challenges to the international community. Economic and humanitarian disasters can be avoided, but only through wise, forward-looking planning. Tough decisions will need to be made regarding the allocation of resources and response to natural disasters. Let us hope that our political leadership can provide the bold vision and strong leadership that will be required to implement a reasoned response.