Not long ago, a boatful of shellfish researchers and I cruised downstream toward a most unlikely structure bobbing at the mouth of one of the most urban bodies of water on the planet.

The 20-foot by 25-foot form ahead of us was an experimental raft that scientists from the U.S. National Oceanic and Atmospheric Administration (NOAA) had placed at the mouth of New York City’s Bronx River last spring. Hanging beneath it were long, sock-like tendrils that had been seeded with Geukensia demissa, commonly known as ribbed mussels. The point of the two-year experiment was to see whether mussels would survive or even thrive given the industrial and organic effluent that flows from the Bronx into the greater New York Harbor. If the mussels did in fact prosper in this environment, it could have implications for how we might help clean up coastal waters in various parts of the world. 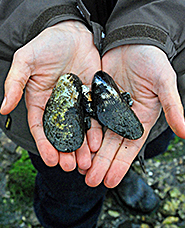 The ribbed mussel was selected for the New York City experiment because of its adaptability. MARK S. DIXON/NOAA, NEFSC

The idea of using bivalves like mussels, oysters, and clams to purify waterways has been on the minds of conservationists and scientists for decades. Perhaps because of a romantic nostalgia for the lost, billion-strong oyster colonies that once girded the coasts of the eastern U.S., millions of dollars have been put into oyster restoration projects, to mixed effect. But as mussel aquaculture grows in the U.S., Canada, and elsewhere, businessmen and scientists are increasingly considering the mussel, both as a way to produce a commercial product and to explore their potential as water filterers.

Uppermost on the minds of the researchers out on the Bronx River — a joint project of NOAA and the Long Island Sound Study — was whether certain types of mussels could be used to rid coastal waters of an onerous influx of nitrogen generated from sewage, fertilizers, and other pollutants. This “nutrient loading” can prompt algal blooms, which in turn deprive coastal waters of oxygen when the algae die and decompose.

“In areas where water quality is degraded… from nutrient over-enrichment, the ribbed mussel looks like a dependable partner to help us recycle lost nutrients back into useful products,” Gary Wikfors, an aquaculture expert and chief of the biotechnology branch at NOAA’s laboratory in Milford, Connecticut, said in an e-mail.

Other researchers also are investigating the beneficial effects of raising seaweed and kelp, in conjunction with bivalves, to clean coastal waters.

In macro-ecological terms, mussels and their bivalve kin are the intestines of coastal ecosystems. Their filters remove organic particulate matter from the water column, particularly phytoplankton. Oysters were long the bivalve of choice in the U.S., but the mussel has certain advantages that are being increasingly touted. Although an individual oyster can filter much more water — an estimated 20 to 30 gallons per day — mussels grow more densely than oysters.

The effects of Hurricane Irene and other storms highlight the mussel’s hardiness.

Carter Newell, the founder of Pemaquid Mussel Farms in Damariscotta, Maine, and who had joined us on the Bronx River raft, explained that mussels do something that oysters in their present state of depletion don’t: They work in three dimensions. Oysters once built tremendous vertical reefs, many feet high, that accrued over centuries in places like the Chesapeake Bay and Long Island Sound. But those wild reefs are mostly gone, and the time needed to rebuild them to a useful height is formidable. Meanwhile, mussel rafts, with their long tendrils of bivalves, can be immediately established in 3D, working throughout the water column at incredible densities.

“My mussel rafts are 40 feet by 40 feet,” Newell told me. “That means they can filter something like five million liters of water per hour.” Mussel rafts also provide habitat, something oyster reefs once did when they were bigger and more substantial. “I have counted 37 different species of invertebrates living among the mussels on their culture ropes,” said Newell, who has a Ph.D. in marine biology. 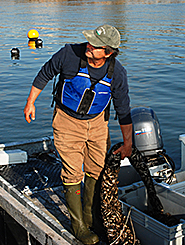 Mussels are also perhaps the easiest bivalve to grow. This is due to the tremendous amount of wild mussel seed, or “spat,” that still swims in American waters. Back when wild oysters were abundant, waterways were dense with oyster spat. But following the oyster’s collapse, oyster spat is increasingly rare.

“I first got the idea to grow mussels after Hurricane Irene,” Bren Smith, owner of the Thimble Island Oyster Company in Connecticut, told me recently. “After Irene there was just this incredible abundance of mussel larvae in the water and they set everywhere. Lobstermen were complaining that their traps were full of mussels. I realized all I’d have to do was provide the structure and I could have a mussel farm.”

The effects of Irene and other storms also highlight the mussel’s inherent hardiness. “Irene completely buried my oysters and killed them,” Smith told me. “[Hurricane] Sandy did, too. The mussels — they were just hanging there on the ropes. They did fine.”

Eva Galimany, a marine biologist with the Institute of Sciences of the Sea in Barcelona and a member of the team working on the NOAA project in New York, noted the sheer abundance of saltwater mussel species (many more than oysters and distributed in intertidal zones throughout much of the world) means that mussels are adaptable to a wide range of conditions. “From my experiments, they are great survivors, barely get sick, and can cope with many types of weather issues and toxins,” she said in an interview.

And since they can cope with difficult conditions it’s hoped that mussels could make it in places like the Bronx and theoretically be harvested and ground up for fish food, assuming they did not contain large quantities of toxics.

But some scientists believe there is only so much that mussels can do. A more diverse set of organisms, they maintain, will be needed to filter out the range of pollutants found in places like New York Harbor. For more than a decade, Thierry Chopin, a marine biologist at the University of New Brunswick, has been conducting research into the related field of “integrated multi-trophic aquaculture,” or IMTA, where salmon, mussels, sea cucumbers, sea urchins, and seaweeds are all cultured together. His research in the Bay of Fundy shows that blue mussels and kelp can be cultivated and thrive thanks, in part, to the wastes produced by nearby pens of farmed Atlantic salmon.

A diverse set of organisms may be needed to filter out the range of pollutants in places like New York Harbor.

His research has also revealed that seaweeds absorb persistent inorganic nutrients in the water column much more effectively than mussels. And unlike bivalves, which use oxygen as they filter and respire, photosynthetic seaweeds generate oxygen, making for a more oxygen-rich system — provided they are harvested before they die and decompose.

Moreover, Chopin believes seaweeds can safely remove toxic substances. “The big problem is that if mussels filter phytoplankton and organic matter they also ingest all that comes with it, and that can be elements or chemicals that reach toxic levels,” Chopin said via e-mail. “What do you do with these mussels? Dump them somewhere? Then you create a pile of toxic material somewhere else.” Better in such areas, he said, to use seaweeds, which can be processed in what he calls an “Integrated Sequential BioRefinery” (ISBR). By breaking down different elements of seaweed in an ISBR, some parts can be used, for example, in cosmetics, while separating out pollutants.

Co-culturing seaweeds with mussels is something the Connecticut mussel grower Bren Smith has caught onto, although in far cleaner waters than New York Harbor. Along with his mussels, he expects this year to grow more than 10 tons of edible kelp, which he sells along with his bivalves at his community-supported fishery.

Although marine scientists hope that operations like Smith’s could build up U.S. aquaculture potential, American growers face steep competition, primarily from Canada. Of the $108 million in mussels consumed in the U.S. in 2012, the overwhelming majority came from Canada. Gary Wikfors of NOAA says that stressing the ecological advantages of culturing mussels is one way to expand the U.S. mussel industry.

Stressing the ecological advantages of culturing mussels is one way to expand the mussel industry.

“More and more people who cultivate shellfish for food are trying to make the public aware of the environmental benefits, the ‘ecosystem services,’ of shellfish aquaculture,” said Wikfors.

Carter Newell of Maine has used the environmental benefits of mussel aquaculture to garner support for mussel farming along the Maine coast. “Shellfish production is the economic argument for clean water,” Newell says. “If you’ve established a shellfish farming area and then some real estate development wants to come in, it’s very hard for them to get permits if they reduce the water quality, because edible shellfish require very clean water.”

Clean water is something in short supply at the mouth of the Bronx River. But as Newell and the NOAA scientists started pulling up yards of rope from underneath the experimental mussel raft, it did seem plausible that mussel culture could one day get going in New York — if not to produce edible mussels, then to grow mussels that would lend a hand in cleaning the water. Each and every mussel sock that we pulled up from beneath the raft was loaded with the ribbed mussels that had been set out the previous year. They had not only survived. They had thrived.

But most interesting of all was the experiment nature had conducted all by itself. On the human-planted raft, colonies of indigenous blue mussels had decided to set all along the ropes. It seems that now it is not only we who are considering the mussel. The mussel, in its way, is considering us.