My apartment in Kathmandu, where I lived for five years, had a toilet that looked very much like the one in my house in California. Nicer even; it was pastel porcelain and had dual flush.

But although flush toilets in Nepal and the rest of South Asia may work quite well, sewer systems have not kept pace. My toilet and all the others in my Kathmandu neighborhood were connected to pipes that carried the contents of toilets away from our residences and straight into a small river a half-mile away. Stray dogs lapped the water and children played nearby.

The rivers of the Indian subcontinent flow clean and clear from the Himalaya, then become little more than sewers as they run through major cities in the plains. New Delhi’s Yamuna River receives roughly half of the largely untreated sewage of a metropolis of 17 million. The Ganges, the holiest of Hindu rivers, is fouled by raw sewage from tens of millions of people as it flows 1,500 miles from the western Himalaya to the Bay of Bengal. 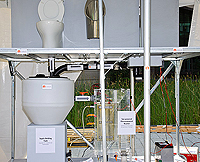 A movement is gaining momentum to do something about this major environmental and public health problem in South Asia and the developing world. The solution, many experts say, is not to invest in western-style flush toilets and centralized sewage systems but rather to develop toilets and decentralized waste-treatment technologies that use far less water. The latest development in this field is the decision by the Bill & Melinda Gates Foundation to invest $40 million in prize money and financial support to groups working on new toilet technology.

The goal of the Gates Foundation and other international and South Asian initiatives is to construct prototypes of inexpensive toilets that use little or no water and minimal energy. The new toilets must convert human waste into useful (or at least benign) components without using septic systems. Most important, they must protect water sources — rivers, streams, and groundwater — from the water-borne diseases so endemic in the developing world.

The stakes are enormous. Water-borne diseases such as typhoid, hepatitis, amoebic dysentery, and garden-variety diarrhea kill 1.5 million people each year, most of them children. Globally, 1.2 billion people — approximately 600 million of them in India — are still defecating in the open, according to a United Nations report. Earlier this month, India’s Rural Development Minister Jairam Ramesh stirred controversy when he bemoaned the abundance of temples in India compared to its lack of toilets.

Governments and international donors in South Asia continue to pursue solutions that follow the methods employed during the last 150 years in the West, where sewage is piped long distances to big treatment plants that typically use a lot of energy and require large amounts of water. But these expensive systems are completely inappropriate for the water-stressed megacities of South Asia, and they are becoming even more untenable as the population grows, water resources are depleted, and global warming threatens to exacerbate water shortages in some regions.

Ironically, sewage pollution of South Asia’s rivers has worsened as increased affluence and population growth have led to wider use of flush toilets. Sewage systems have failed for numerous reasons. Pipes get clogged; diversion canals sometimes do not work, or there’s not enough electricity to run treatment plants; and frequently sewage systems simply don’t get built or are built to the wrong specifications, despite a large investment of funds by governments — particularly in India — and foreign organizations.

Toilets can use up to seven liters of water per flush, thus creating large amounts of sewage that often pours directly into waterways. As a young Indian architect, Sheel Raj Shetty, who works on solutions to the toilet conundrum, points out: “Eighty to 90 percent of fecal matter is water. If you remove the water, what’s left could be contained in a small matchbox. What we say is, ‘Don’t flush your [waste]. Don’t put water in.’”

The new toilet technologies aim to heed this advice, while also striving to produce hygenic toilets that are dramatically different from an old-fashioned outhouse. In August, the Gates Foundation awarded its first prize to environmental science professor Michael R. Hoffmann of the California Institute of Technology, whose team devised a toilet that uses solar power to transform human waste into fertilizer and hydrogen. The hydrogen from the electrochemical reaction can be used in hydrogen fuel cells as energy, and the treated water can be reused to irrigate fields.

Hoffman says the technology behind his prize-winning solar-powered toilet had been sitting on the shelf since he demonstrated it to NASA in the early 1990s for use on the International Space Station.

The second-place winner designed a toilet that transforms human waste into biological charcoal, minerals, and clean water. The third-place winner devised a method to treat urine and feces separately, using sand to filter urine; feces dries inside the toilet and can be used as fertilizer.

In South Asia, forward-thinking entrepreneurs and engineers have begun important pilot projects, and early adopters are already combining ecological toilet technology in their homes with rainwater harvesting, dual pipes, and composting. Eram Scientific Solutions, based in the Indian state of Kerala, has received a grant in the second round of the Gates Foundation toilet initiative to continue work on its e-toilet, which employs an anaerobic process to digest waste. The e-toilet is a self-contained unit inside a brightly colored booth that can be situated on a city street. It has already been tested at 300 sites in Kerala, a state with one of India’s best-educated populaces.

Eram Scientific Solutions plans to sell the device in the developing world, but the coin-operated, self-sanitizing booth would be appropriate in the developed world, too. The e-toilet would be connected to an electronic system for monitoring, which would also allow potential users to locate toilets on city streets. Eram also is working on decentralized sewage technology that could be used for up to 25 families.

Lack of technology, however, may not be the chief cause of failed sanitation in South Asia and elsewhere. People who have long been working to promote sanitation in the region point out that while technology is good, too much focus on it alone can actually be detrimental. An array of other issues matter just as much: personal habits, family priorities, local customs— and above all whether communities are receptive to change. And so far, says Eklavya Prasad, efforts to propagate toilet technologies tend not to take all this into account.

People in some parts of the world still need to be convinced that toilets are necessary.

Prasad, who directs Megh Pyne Abhiyan — a coalition of grassroots groups working on sanitation in the Indian state of Bihar — notes that governments often want a one-size-fits-all solution. If the device is right for the locale and social workers clearly explain to people how to use and maintain it, things generally go well, as they have in parts of Bihar. If not, the toilet may sit unused while people continue to defecate in the open.

A very simple and successful technology called the sulabh toilet has been propagated for several decades by Stockholm Water Prize winner Bindeshwar Pathak. But even this basic and inexpensive toilet has required some marketing to become popular in India. Pathak’s work began with a crusade in Bihar to rescue a caste condemned to manually cleaning dry toilets for higher castes. His solution, still widely used throughout the developing world, consists of two large pits in the ground with a squat toilet — the type preferred in Asia — in between.

The sulabh toilet requires only a liter or so of water per manual “flush.” A family or neighborhood can use the toilet until one pit is filled, then switch to the other one. In a couple of years, when the second pit is full, the contents of the first have decomposed, become sanitary, and can be removed for use as fertilizer. In cities, large sulabh facilities are connected to biogas systems so that the waste is processed into energy.

More recent solutions for rural India include versions that do not overflow during floods and urine-diverting ones, which separate out phosphate-rich urine so it can be used as fertilizer. Dutch water and sanitation specialist Marijn Zandee has worked with UN Habitat in Nepal on urine-diverting toilets. He says this type of toilet may become more important as mined rock sources of the crucial fertilizer phosphate continue to diminish. Regarding the Gates initiative, Zandee cautions that “having a cool new technology may help,” but many people still need to be convinced that toilets are necessary. In addition, he says, sanitation laws and enforcement mechanisms must be created, along with a supply chain and maintenance services.

Nitya Jacob, a water and sanitation specialist at the Center for Science and Environment in New Delhi, warns that new toilets and decentralized waste treatment have the potential to put conventional sewage systems out of work “along with the rather corrupt engineers and bureaucrats that run these systems.” But he says the real obstacle will be to get city planners and developers to deploy something that challenges the concept of a toilet linked to a sewage system.

Still, Jacob welcomes the Gates initiative because the new designs for toilets eliminate the need for traditional sewage treatment systems. That, he says, holds promise for both developing and developed world settings.

I, too, welcomed news of the Gates awards, hoping the publicity might encourage people who have come to take toilets and sewer systems for granted to give this issue some thought. In the United States, sewage treatment has not been a problem for the past half-century, but it could become one again as infrastructure ages and fails — especially if there is a lack of government money to replace it. In addition, certain regions of the U.S. are expected to experience water shortages as temperatures rise. New, water-saving, decentralized toilet technologies may need to be adopted not only in places like South Asia, but also in parts of the industrialized world.