Amid clouds of steam spewing from magma-heated pockets beneath Iceland’s Reykjanes Peninsula, a start-up company is tapping volcanic forces to transform the climate change agent carbon dioxide from a problem into a solution.

Using geothermal electricity and flue gas from the Svartsengi power plant nearby, Carbon Recycling International (CRI) fuses waste CO2, with hydrogen split from water to create “renewable methanol.” The Reykjavik-based clean-tech venture recently began exporting the product to the Netherlands, where it is blended into gasoline. Its name, conjuring images of a comic book superhero, is Vulcanol. While others elsewhere are working on similar efforts to make green fuel from repurposed CO2, only CRI has been able to do it commercially, thanks to Iceland’s abundant supply of low-cost, earth-generated power. 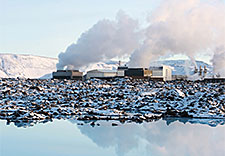 As Iceland struggles to get back on its feet after a fiscal crisis that began in 2008, CRI is one of numerous ventures seeking to turn the geologic hotspot’s renewable energy bounty into an exportable economic asset. Pioneers in harnessing geothermal heat for power, Icelanders are now bringing their expertise to a variety of novel endeavors, including a 1,000-kilometer undersea cable carrying renewably generated electricity to Europe.

Aside from oil for transportation, Iceland’s power comes entirely from sustainable sources.

This volcano- and glacier-covered island straddling the Mid-Atlantic Ridge already leads the world in renewable energy use — aside from oil for transportation, Iceland’s power comes entirely from sustainable sources. Geothermal steam heats most buildings and generates about a quarter of its electricity, with the rest coming from hydropower. Inexpensive electricity — up to 35 percent cheaper than in the U.S. — has lured aluminum smelters and other power-intensive industries.

But analysts say Iceland’s energy resources are vastly underutilized, and exploiting them is crucial to an economy whose current biggest driver is fishing. So a spate of projects are in the works, including new, carbon-free consumer products and a promising method for locking away greenhouse gases, which could benefit CO2 sequestration efforts worldwide.

“We’re trying to create a value and a premium from our ability here in Iceland to utilize these renewable energy resources,” said Benedikt Stefansson, CRI’s director of business development. In July, a Canadian company invested $5 million in the company.

One of the boldest ideas, with potentially the greatest economic benefit, is the proposed $2.1 billion electrical interconnector to Scotland, which would become the world’s longest undersea power cable. The project is the brainchild of state-owned utility Landsvirkjun, which operates the country’s hydroelectric system. Currently, about 80 percent of Iceland’s electricity goes to heavy industry. The cable scheme would increase Iceland’s geothermal operations and switch all of its domestic energy needs to these sources, then sell its hydroelectricity to the U.K. as a peak power supply.

“This is of a scale and scope that is foreign to Iceland,” Bjorgvin Sigurdsson, executive vice president for marketing and business development, said in an interview at Landsvirkjun’s Reykjavik offices. “It’s actually a way to rethink the whole system. The idea is to use geothermal to displace hydro, so the hydro is available for use as the flexibility mechanism for export.”

Iceland and the U.K. signed a memorandum of understanding on the project last year, and this fall Iceland’s parliament and cabinet are expected to decide whether to move forward. Big hurdles at present include public fears that local electricity prices will skyrocket, concerns that the project will create jobs abroad instead of in Iceland, and a steep cost that requires guaranteed revenues through an as-yet-unsigned, long-term power contract with the U.K.

Many of these renewable energy projects come with a high price tag.

On a recent morning at the Innovation Center’s R&D facility north of Reykjavik, Sigfusson and colleague Árdís Ármannsdóttir played with a bundle of silky, gray strings, which he calls “fairy hair.” Made from basalt — the volcanic rock covering much of the island — the filament offers a green alternative to carbon fiber, a ubiquitous manufacturing material synthesized from oil and natural gas.

“Carbon fiber’s footprint is very bad,” said Sigfusson, a renewable energy expert who is also a physics professor at the University of Iceland. “But there is a way to go about it which is much greener. This will be possible to do with green heat from our power plants and with no carbon ingredients. It will be amazingly green.”

The idea isn’t new — basalt fiber has been around since World War II, but it was difficult to work with and never gained widespread use. Now, using technical advances developed at ICI, Sigfusson predicts the new filament will replace carbon fiber in products like car bumpers and boats, becoming an important Icelandic export. He expects manufacturing to begin within two years.

Other ICI energy projects include using new technologies to generate electricity from low-temperature geothermal fields, and creating synthetic, renewable diesel fuel. One cutting-edge concept is to develop materials that can store geothermal heat for release by a chemical reaction later on. “Then we could use our high-temperature [geothermal] fields to actually power up the less-blessed areas of Iceland, Greenland, and the Faroe Islands,” said Ingolfur Thorbjornsson, ICI’s managing director of technological development.

Many of these projects, however, come with a high price tag. CRI’s renewable methanol, for instance, is about twice the price of conventional methanol, according to Stefansson. This year the plant will make 1.7 million liters (about 450,000 gallons), which is expected to grow to 5 million liters after a planned expansion.

Moreover, not all Icelanders favor expanding use of the nation’s energy resources.

What’s more, about three-quarters of Iceland’s electricity now goes to aluminum smelters that burn carbon electrodes, giving off significant amounts of CO2. Add in the fossil fuels still used for transportation and commercial fishing, and the nation’s carbon footprint is heavy despite its renewable energy. Iceland’s 320,000 residents have the highest per capita greenhouse emissions in the Nordic region, and among the highest in Europe, although it is still well below the U.S. and Australia, according to data from the European Energy Agency and Nordic Energy Research.

CarbFix would inject CO2 water into underground basalt formations, where it would solidify as carbonates.

CarbFix, a new carbon capture and storage method being developed at the University of Iceland, could help keep some of that climate-warming gas out of the atmosphere. Siphoning CO2 from smokestacks and sequestering it is critical for holding down emissions, and may soon be required at all coal-burning power plants in the U.S. But the technology has been difficult to develop. CarbFix — a partnership involving state-owned power company Reykjavik Energy, the University of Iceland, Columbia University’s Earth Institute, and France’s Center for Scientific Research — is currently being tested at a pilot site near the Hellisheidi geothermal plant, where it uses the island’s reactive basalt to permanently trap CO2 emissions.

“What we do differently than everybody else is we basically make soda water,” said Sigurdur Gislason, a professor at the University of Iceland’s Institute of Earth Sciences and chairman of the project’s scientific steering committee. The process pumps CO2 into water underground, where it dissolves and reacts with minerals in the basalt. Within a decade or two, it solidifies as carbonates. Compared to other carbon storage approaches, such as injecting compressed CO2 into sedimentary rock cavities, trapping carbon in basalt is far quicker, with virtually no chance of leakage, Gislason said.

The process requires 25 metric tons of water for every ton of CO2 — not a problem in Iceland, which receives ample amounts of rainfall. The Hellisheidi target zone contains enough basalt to store 12 million metric tons, or 200 years’ worth of the plant’s CO2 emissions at its current production level. Basalt-rich coastal areas and the entire ocean crest are also potential storage sites, Gislason said.

Next year, plant operator Reykjavik Energy will expand the project to include hydrogen sulfide as well. Eliminating both gases would allow geothermal energy production to be stepped up in Iceland and elsewhere. “If we prove that this can be done without harming the harnessing of the heat, then of course this is very positive for geothermal energy utilization,” Gislason said. “If the industrial scale-up is successful, then this is something that could be done within the next five years.”

While tiny Iceland is unlikely to become a global renewable energy powerhouse, the world could learn from the resourcefulness of this remote northern island. Banking on sustainable power could both shore up its sagging economy and help build a bridge to a fossil-fuel-free future.