Computers feasting on their own exhaust heat. Super-efficient solar panels snaring lost thermal energy and recycling it into electricity. Personal electronics powered by stray microwaves or vibration-capturing clothing. Cellphones charged with a user’s footsteps. These and more innovations may be possible with free, green energy that is now going to waste. 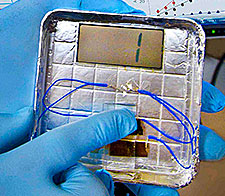 The Bacteriophage Power Generator is made of biopolymer layers that produce electricity when squeezed. LAWRENCE BERKELEY NATIONAL LABORATORY

Ubiquitous sources like radio waves, vibration and pressure created by moving objects, heat radiating from machines and even our bodies — all have the potential to produce usable electric power. Until recently, ambient energy was largely squandered because of a lack of ways to efficiently exploit it. Now, advances in materials and engineering are providing tools to harvest this abundant resource and transform it into cheap, clean electricity.

“This power is simply available and it’s not doing anything right now, so it’s truly being wasted,” said Steven Cummer, a Duke University electrical and computer engineering professor working on harvesting ambient electromagnetic radiation to power electronic devices. “And as people think of useful things to do with it, then you’re doing those things with available power instead of requiring new power.”

This up-and-coming technology, some experts say, can save energy, liberate portable electronics from the grid, and all but do away with disposable batteries. Although it won’t begin to replace solar and wind for generating utility-scale electricity, energy harvesting can serve as a multiplier for these and other sustainable resources, boosting productivity by feeding escaped power back into the system, expanding the range of sunlight that can be harnessed, and powering controls that keep equipment functioning at its peak. If obstacles of size and efficiency are overcome, repurposed ambient power can be an important contribution to the renewable energy supply.

This up-and-coming technology could all but do away with disposable batteries.

The concept isn’t new — in a sense all energy drawn from the environment is “harvested.” Nor is there a standard definition for the emerging technology known as energy harvesting or energy scavenging, but it primarily involves collecting low-power electromagnetic, thermal, mechanical, or light energy and converting it to electric current.

Exploiting free, ambient energy is “an interesting idea and you’re going to see more applications of it,” said Jonathan Koomey, research fellow at Stanford University’s Steyer-Taylor Center for Energy Policy and Finance. But the technology has a long way to go, he said. Constraints on space and the amount of energy that can be gleaned in many settings now limit its use to small, fairly low-power devices. “It’s not this magic bullet,” Koomey said.

Still, in today’s power-hungry world, energy scavenging can help ensure that no watt goes to waste.

“Your computer, hot asphalt, there’s a million things that are fairly hot but not really viable for standard thermoelectrics,” said Harry Radousky, a physicist at Lawrence Livermore National Laboratory in Northern California and co-developer of a nanoscale harvester for low-temperature heat, such as exhaust from appliances. In contrast to high-temperature, waste-heat capture systems — in which sources like flue gas provide a steep heat gradient for thermoelectric generators — the small heat differences between low-temperature sources and their surroundings are much harder to convert into electricity. But new low-temperature thermal harvesting technology could turn these overlooked resources into working power.

For instance, Radousky said, “we park our cars in hot parking lots all over the U.S. in the summer, so in principle we could charge batteries in electronic devices, [and] run coolers to keep food cold” with heat from the pavement. Other prospects for reaping low-temperature thermal power include light bulbs, hot ovens, and plastic seats inside cars baking in the sun. “My rule of thumb is that if it is too hot to touch, it’s a candidate source,” he said. “So we were looking for things that could harvest that low quality of heat … where a small amount of energy can get you a long way.”

“Our motto is ‘No wires, no batteries, no limits,’” says one expert.

As energy harvesters become increasingly efficient and cost-effective, a growing number of products such as light switches, thermostats, gas detectors, and avalanche alarms are going off-grid and battery-free.

“Our motto is ‘No wires, no batteries, no limits,’” said Graham Martin, chairman of EnOcean Alliance, a California-based consortium of companies promoting a wireless standard for automated building controls that run on scavenged power.

Regulating building heat, cooling, and lights with devices like room occupancy sensors can cut energy use by as much as 40 percent, Martin said. EnOcean Alliance reports that more than 250,000 buildings worldwide contain its energy-scavenging devices, like wireless, battery-free controls with tiny, integrated photovoltaic cells that harvest energy from room lights, or vibrations that agitate a pressure-sensitive material, releasing electrons. Martin estimates that EnOcean devices have saved 50 million batteries, and predicts that 3 billion switches, sensors, thermostats, transmitters, and other low-powered, self-contained gadgets will be in use within five years.

While the market for energy-harvesting devices is currently “not massive,” it is growing steadily, said Harry Zervos, senior technology analyst with the consulting firm IDTechEx. Some of the biggest uses at present include vibration-driven equipment monitors on oil rigs and other remote settings, and car tire pressure sensors running on mechanical energy from the wheels. The technology is now at a tipping point with advances in efficiency, reliability, and affordability, according to Zervos, who expects revenues to hit roughly $4 billion in a decade or so.

The greatest benefits may lie in cutting waste and boosting output from existing electricity sources.

Future applications could range from powering a car’s electrical systems with heat captured from the tailpipe, which University of Houston physicist Zhifeng Ren estimates would increase mileage by 5 percent, to a film that can be attached to human skin, converting a person’s movements into energy for portable devices.

Energy harvesting’s greatest benefits, however, may lie in cutting waste and amping up output from existing sustainable electricity resources.

Self-powered wind turbine monitors, for instance, could warn of problems in time to keep turbines from going off-line. And capturing lost heat would significantly boost solar production. Mahmoud Hussein, an assistant professor of aerospace engineering sciences at the University of Colorado Boulder, has come up with a process that could convert heat to electricity much more efficiently: topping thermoelectric material with nano-sized pillars to slow escaping heat vibrations called phonons. The pillars stem heat loss by interacting with, rather than impeding, the phonons, leaving the electric current undiminished, a significant gain over existing thermoelectric materials.

Improved thermoelectric technology can help recoup energy lost by photovoltaic cells that utilize only part of the light spectrum while the rest escapes as heat, Hussein explains. Harnessing waste heat “adds to the field of harvesting energy from the sun,” Hussein said.

Engineers and entrepreneurs are also coming up with a host of other ingenious ways to put ambient energy to work.

At the Lawrence Berkeley National Laboratory on the University of California, Berkeley campus, bioengineer Seung-Wuk Lee is harvesting energy produced by a virus. Genetically engineered to contain a protein that generates electricity when squeezed, the virus infects bacteria and makes them create “zillions of copies,” Lee said. The result is layers of piezoelectric biopolymer with strong positive charges on the inside and negative charges on the outside that transform pressure into power.

One possible application is biomedical devices powered by motions from the body’s organs.

“Piezo means press,” Lee explained, “so when we mechanically press, we break the symmetry and induce their electric potential.” He demonstrates, tapping a super-thin, fingertip-sized biopolymer sandwich. A few inches away, a small display lights up, spelling out “Virus.”

This so-called Bacteriophage Power Generator can produce enough electric current to power LEDs, but the output would need to be increased a thousand-fold to illuminate a light bulb. Lee and colleagues are now working on boosting that performance.

Another possible application is biomedical devices powered by motions from the body’s organs — especially useful for implants like pacemakers now driven by batteries that must be surgically changed. “We can convert small energy from our heartbeat,” Lee said. “The potential is endless.”

At the University of California, Los Angeles’ Henry Samueli School of Engineering and Applied Science, Professor Kang Wang and colleagues are developing a way to power appliances and electronics with their own excess heat. The process channels heat given off by a working computer, for example, into spin waves able to power and speed up the machine at the same time.

Reprocessing waste heat can save electricity used not just in powering up computers, but also in cooling them down. Such savings would be especially significant at large server farms, where Wang says the dissipation of power is “an enormous drain on energy.”

Lawrence Livermore’s Radousky and partner Morris Wang, meanwhile, combined two technologies to wrest energy from low-temperature sources. Their hybrid harvester contains a phase-change material that deforms when heated and stresses a piezoelectric surface, producing current. Although the output is less than a volt, it could be deployed in arrays of miniscule sensors and processors known as MEMS (microelectromechanical systems), currently used as autonomous controls in cars, airplanes, imaging systems, and numerous other applications, Radousky said.

“The basic idea is to create energy which is used locally, rather than needing to be transmitted,” he said.

But don’t plan on getting rid of that tangle of chargers and power cords just yet. Satiating sophisticated portable electronics like cell phones with ambient radio waves sounds great, but unless you’re standing next to a transmitter, pulling in enough signal requires an antenna larger than the phone, according to Koomey. And even that can only power a very basic model, he said. “Your iPhone is not going to get charged.” Alternatives are in the works: Researchers at Georgia Tech have developed cell phone-powering shoe inserts, and a company called Sole Power plans to market footwear late this year that charges your phone while you walk. Both, however, need “many steps” — on the order of a 10-mile hike — to get the job done.

To Koomey, the greatest value of energy-harvesting is information: enabling small, self-contained sensors to provide data that can optimize power use and trim waste. “The way we operate the economy now, there’s all this inefficiency because we just don’t know, we’ve never been able to measure the inefficiency before,” Koomey said. “There’s huge efficiencies that can be wrung out of the system.”

As Zervos put it, “By using just microwatts, you can save kilowatts of energy that would have gone to waste.”