In early 2008, residents of Gaodong — a hamlet of 278 people nestled in the picturesque Wuling Mountains of south-central China — invited the head of the surrounding township to listen to a list of grievances about the manganese mining they claimed was ruining their community. Living in a county that produces one-fifth of all the manganese excavated on earth, the villagers had — like many ordinary Chinese — paid a high environmental price for fueling China’s economic boom. In this instance, however, the people of Gaodong had decided they would take it no more.


Gaodong is located in Xiushan, a county that is home to 41 licensed and more than 200 unlicensed manganese mines, which excavate the valuable metal — used in steel, aluminum, and copper production — by blasting the earth with dynamite. The residents of Gaodong and neighboring villages have been 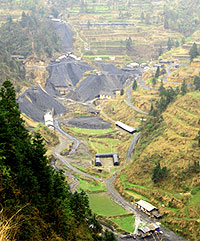 A manganese mine in Sichuan province

subjected to frequent explosions that crack the foundations of their homes and force their children to stuff cotton in their ears to do their homework. They have seen their underground aquifers drained by the mining activity, which empties all six of the village’s wells in the dry season. Their rivers sometimes run black as the mining companies and manganese refineries dump tons of toxic mine waste directly into surrounding waterways. They have watched as badly polluted irrigation water destroys rice crops, kills fruit trees, and cuts harvests by more than half. In addition, the village air has been fouled with mining dust, and local health officials have diagnosed some local mine workers with neurological diseases caused by heavy metal pollution.

For several years, the villagers have been seeking compensation for these various ills, which is what brought township head Zhou Hui to Gaodong. But when he ended their evening meeting with no resolution, residents erupted in anger. Four women — one of whom was 75 and one 67 — prevented his car from leaving. When police tried to pull the women away, they latched onto Mr. Zhou’s legs. The police kicked and punched the women, at which point the village men joined in the melee, breaking Mr. Zhou’s left wrist and injuring some policemen. Two of the women were injured, as well, with one of them spending nine days in the hospital.

Two days after the melee, the police raided the village and hauled in every male older than 16 for interrogation. Afterwards, several dozen men — fearful of arrest or official retribution — headed for the hills, sleeping for months in makeshift huts. Thirty local men working in the mines never returned to work.

Today, an uneasy standoff exists in the village. No charges have been filed against Gaodong residents, and some mines have paid modest compensation to villagers. But the clash remains a striking example of the rising anger felt by many Chinese fed up with the egregious pollution that is the byproduct of their country’s dizzying economic rise. The conflict in Gaodong also testifies to the growing resentment of the corruption that often goes hand-in-hand with pollution, as the very officials who are supposed to be policing the manganese mines often have financial interests in the enterprises. As the People’s Representatives Standing Committee in Xiushan County delicately put it, the mining industry is “disorderly, with interests distributed across many parties.”

Laws exist to regulate pollution from the manganese mines, but in reality local and county officials have done little or nothing to prevent the mining from wreaking environmental havoc.

Mining began in earnest in Xiushan County 30 years ago during China’s initial economic reforms under Deng Xiaoping. As a remote, mountainous corner of the Chongqing region in Sichuan province, the only way for Xiushan to develop was to exploit its mineral resources, of which manganese was the most valuable. By the early part of this decade, Xiushan had become an integral part of China’s so-called “manganese triangle,” along with neighboring Huatan in Hunan province and Songtao in Guizhou province.

With China’s metallurgical industry experiencing huge growth, manganese — a brittle, grayish-white metallic element — was vital in producing acid-resistant steel, aluminum-manganese alloy, and copper-manganese alloy, among other uses. Extracting and processing the metal has become such a mainstay of Xiushan’s economy that by 2007, 80 percent of the county government’s 500 million yuan ($73 million) in revenue came from the manganese industry.

Central and regional laws exist to regulate pollution from the manganese mines, but in reality local and county officials have done little or nothing to prevent the mining from wreaking environmental havoc. In recent years, 41 manganese mines were given permits to operate in Xiushan. But a local newspaper reported that as many as 230 additional mines were operating illegally in the county, using an estimated 700,000 kilograms (1.5 million pounds) of explosives to blast holes in the mountains, after which workers hacked out the manganese using picks, their hands, and some mechanized equipment.

In recent years, the environmental damage from mining in Xiushan has

Manganese mining in China is centered in Sichuan, Hunan and Giuzhou provinces

become so great that the ire of local residents could no longer be offset by the relatively high salaries earned by miners — from 2000 to 5000 yuan ($290 to $730) a month, four to ten times the average local salary. The blasting rocked every corner of the county, knocking homes off foundations, cracking walls, and filling the air with a fine dust. Most damaging, however, was the effect on the county’s water resources, both above and below ground.

In recent years, many underground aquifers have disappeared because the mines use water to process manganese and because extensive underground blasting has disturbed subterranean streams that feed residents’ wells.

“Once they started mining, our water dried up and we could no longer irrigate a lot of the fields,” said Zhao Renjun, a resident of Gaodong, where three legal mines and more than 10 illegal ones have been operating. “There was nothing for us or the animals to drink.” According to Zhao, all of the village’s six wells are now empty in the dry season.

Unirrigated fields now lie barren. Even good fields have seen harvests drop by more than half. Lack of irrigation water, coupled with pollution from manganese mining, sharply reduced the rice yields of 60 percent of the farmers in and around Gaodong.

Rather than build ponds to contain the wastewater produced by mining and manganese refining, many enterprises also let the toxic wastewater flow directly into rivers and streams, polluting drinking and irrigation water.

In June 2006, the Xiushan county government reported that one company, Wuling Mining, was polluting rivers with wastewater containing 100 times the allowable levels of manganese. (Under public pressure, the county government eventually shut down Wuling Mining.) Among the mining wastes were ammonia and hexavalent chromium, a proven human carcinogen. One local medical expert, who asked to remain anonymous, noted that long-term exposure to drinking water contaminated with hexavalent chromium could weaken the kidneys, heart, liver, and bones and cause headaches, nosebleeds, and rashes. Xiushan County’s Center for Disease Control and Prevention said some mine workers had suffered neurological disease from exposure to heavy metals and were at higher risk of developing Parkinson’s disease.

Gaodong residents also complained that with the rapid spread of manganese mining in recent years, their fruit and vegetable trees had often turned black and that their own skin had blackened, sometimes so badly they were afraid to show their hands to relatives out of fear of being teased.

Under Chinese law, polluting companies are required to compensate residents for damages to their health and the environment, but by 2005 companies still were not paying villagers in and around Gaodong. Local anger grew to the point that residents began blockading roads, and in 2005 several violent clashes broke out between residents and what they labeled as “thugs” from the mining companies. In one clash, nine female villagers were injured. In another, a villager was stabbed three times. Said one villager, who asked to remain anonymous, “A boss at Weiye Mining and some hired thugs injured seven of us. They used rocks and drove their cars toward us. Three of us were hurt seriously. One villager was attacked by a Tuoyuan Mining boss and his thugs. He ended up with three knife wounds.”

No one was arrested in these attacks, but the unrest in Xiushan did have some impact. The following month, Chinese President Hu Jintao wrote an article in a policy journal urging the State Environmental Protection Agency (now the Ministry of Environmental Protection) to investigate and coordinate a response to pollution in the manganese triangle. Not long afterward, the township encompassing Gaodong set up a 12-person working group to mediate between the mining companies and local residents.

Still, local residents saw little change, and in December 2007, with most mining companies refusing to compensate the villagers, 40 elderly women from Gaodong walked to a local mine and blockaded its entrance, preventing workers or equipment from entering.

Entrance to a mine in the ‘Manganese Triangle’

In this remote part of the Wuling Mountains, home to the Tujia and Miao ethnic minorities as well as the majority uneducated Han, the women lit fires and braziers to ward off the cold and took turns standing guard at the mine entrance. The blockade lasted for a month.

Finally, earlier this year, the clash between Gaodong villagers and the township head took place, focusing even greater public attention on pollution problems in the manganese triangle. Some of the legally operating mining companies are now compensating local residents, paying each Gaodong resident about 1,000 yuan ($146) a year in compensation. Still, many mines continue to refuse to compensate residents of nearby communities.

County officials claim to be cracking down on illegal mines, which are responsible for some of the worst pollution. Ai Daliang, deputy head of the county land and housing bureau, which oversees the mining industry, said, “Now 80% of our time is spent … closing down illegal mines. But the mine bosses find out our enforcement teams are on the way before we’re even out of town, and they just disappear. All we can do is blow up their equipment and the mine entrance.”

His comments highlight a fundamental problem — the ubiquitous corruption that has enabled so many illegal manganese mines to operate and so many legal ones to violate regulations and pollute with near-impunity. Some local government offficials have interests in the manganese industry. In 2004, members of the county’s economy and trade committee were detained after it was discovered that they had paid members of the public to protest on behalf of mines in which they had a financial interest.

“It’s there for the taking,” one official said. “Who is going to say no?” Even officals in Chongqing hold shares in mines through friends and relatives, making it almost impossible for the county government to address pollution problems.

As the People’s Representatives Standing Committee in Xiushan reported, “The county, townships, villages, work groups, and business are all involved, as are the industrial, metallurgical, energy, and business authorities … The resources are being carved up as everyone struggles to get their share.”

One official in the Chongqing region told the Time and Truth newspaper, “It is not true that we do not want to crack down on illegal mining. However, we dare not do so. This is because of official involvement in the mining industries and some local senior officials holding stock in the mines.”

Meanwhile, pollution from the manganese mines only worsens, leaving residents worrying about its effect on their farms, their homes, and their health.

Said Ran Renjun, a resident of Gaodong in his early 40s, “We’re basically waiting to die.”