After three decades of studying the world’s great rainforests, including the Amazon and Congo Basin, I thought I’d seen the best nature has to offer. But that was before I visited a small pocket of forest in northern Borneo known as the Danum Valley. There, I found a dedicated band of international and Malaysian scientists fighting to save a true biological Eden. 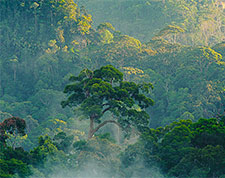 Forest in the Danum Valley, one of the last, unspoiled tropical forest regions in Borneo. CH’IEN C. LEE

In just three days at Danum, I saw a stunning assortment of creatures. Dense rainforests are notoriously difficult places to spot wildlife, but not at Danum — animals are practically dripping from the trees. Bornean gibbons howl from treetops, while giant squirrels and macaques leap spectacularly among branches. Pygmy elephants abound, along with sambar deer and bearded pigs. Orangutans are spotted regularly, while my nighttime hikes revealed palm civets, leopard cats, and giant flying foxes. Even while taking breakfast on the deck of the research lodge, I was enthralled by a kaleidoscope of butterflies and birds, including magnificent rhinoceros hornbills. And soon after that I had a jolting encounter on a forest track with a spitting cobra, which reared up with hood extended just six feet in front of me.

By any measure, Danum ranks among the world’s most biologically rich and imperiled real estate.

By any measure, Danum ranks among the world’s most biologically rich and imperiled real estate. My host at Danum, Glen Reynolds, who oversees the British Royal Society’s research in the area, explained how the forests of Borneo have suffered hugely in recent decades from rampant logging, slash-and-burn farming, and cutting for oil palm and rubber plantations. The island’s rich lowland forests have nearly vanished, with rates of forest loss still among the highest on Earth. For this reason, Borneo is a global epicenter for endangered wildlife, with conservation prognoses for many species becoming ever more perilous.

But Danum has survived, thanks in part to the prestige of the Royal Society and its three decades of collaborative research in Sabah, the Malaysian state in which the conservation area is located. The Royal Society has forged close ties with several influential partners, including the Sabah Forestry Department, the nearby Universiti Malaysia Sabah, and the Sabah Foundation, which administers Danum Valley and its surrounding forests. It also has trained scores of Malaysian scientists and policy makers, including a number who now hold key research or government positions in Sabah and elsewhere in the region. 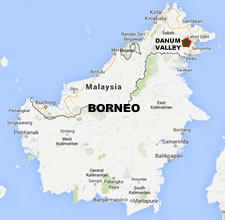 Danum is not big by nature-reserve standards — it spans just 438 square kilometers (169 square miles) — but it has impressive attributes and occupies a pivotal position in a rainforest region under siege. In Borneo, half a square kilometer of forest can sustain well over a thousand tree species — more than occur in the entire Northern Hemisphere. In addition, while the forests surrounding Danum have suffered considerably, the reserve itself has never been hunted or logged. That means that wildlife abounds in rainforests dominated by ancient, towering trees, some reaching up to 80 meters (262 feet) in height.

The combination of off-the-charts species diversity and high animal abundance seen at Danum is exceedingly rare. In the central Amazon, for instance, species diversity is very high but you can walk all day and see just a handful of animals — the forest’s nutrient-starved soils sharply limit animal numbers. And elsewhere in Borneo, many nature reserves have suffered terribly from hunting. At Lambir Hills National Park in Sarawak, for example, half of the primate species, six of seven hornbill species, and nearly all of the endangered mammal species have been hunted out. With the disappearance of its key seed dispersers, the fruits of many trees now just rot en masse on the forest floor.

From the air, one can see a tsunami of threats advancing toward Danum.

The scientists who flock to the Danum area, many working through the Royal Society’s Southeast Asia Rainforest Research Program, have made important discoveries. Among these is that epiphytic plants perched high in the rainforest canopy are hotbeds of biodiversity, sustaining a veritable zoo of creatures living inside them. A former postdoctoral researcher in my lab, David Edwards, has shown that even repeatedly logged native forests in the Danum area can sustain considerable biodiversity — less than is found in old-growth forest but far more than occurs in oil palm or rubber plantations.

From the air, one can see a tsunami of threats advancing toward Danum. To reach the park, I flew from the small city of Kota Kinabalu across northern Borneo. This was like touring a battle front — to the south I saw mostly forest, to the north devastation, especially from rapidly expanding oil palm plantations. Danum is smack in the middle of this ecological war zone. 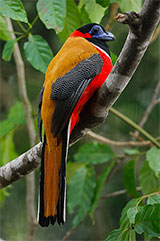 A red-naped trogon, one of many bird and animal species found in the Danum Valley. CH’IEN C. LEE

In recent decades the forests around Danum have been heavily logged, often repeatedly. Their stocks of timber depleted, many of these forests are now being bulldozed for oil palm or for growing plantations of acacia, which is chipped and then shipped overseas to make paper pulp. For Reynolds, this is a travesty. “I realize the government needs income from its forests,” he says, “but unrestricted development of plantations at the expense of forests is an ecological disaster. It’s infinitely preferable to have logged native forests, which sustain many vulnerable species, including the orangutan.”

Reynolds has found a sympathetic counterpart in Malaysia in Sam Mannan, the director of the Sabah Forestry Department. Though under intense pressure from his political masters and oil palm interests to clear more forests, Mannan has managed in the last two years to reclassify more than 3,000 square kilometers of logged forest near Danum as fully protected forest reserves, ensuring their long-term survival. Crucially, these new reserves were designed to create buffers around Danum and two other small protected areas in the vicinity, and to begin linking them together so that none becomes fully isolated by encroaching development.

Mannan’s efforts are vital, because small size and isolation are the enemies of nature. A single herd of elephants, for instance, may need to range over hundreds of square kilometers, whereas fruit-eating animals such as bearded pigs, sun bears, and many birds famously migrate across vast areas of Bornean forest in search of fruit. For such species, forest isolation could be a death sentence. Indeed, my own research shows that in forests across the tropics, biodiversity fares far worse if the habitats surrounding protected areas are cleared or heavily disrupted.

The specter of future climate change is lending a special urgency to those battling for the Danum ecosystem.

In addition to an avalanche of land-use pressures, the specter of future climate change is lending a special urgency to those battling for the greater Danum ecosystem. Current climate models suggest that in coming decades, global warming will amplify El Niño droughts in the western Pacific region. In the past, such droughts, combined with widespread logging and slash-and-burn farming, have led to catastrophic forest fires in Borneo. Droughts in Borneo also trigger mass fruiting events that are followed by long periods of fruit scarcity, during which wildlife must either move to new areas or die.

A Desperate Effort to
Save the Rainforest of Borneo

The once-magnificent rainforests of Borneo have been decimated by rampant logging and clearing for oil palm plantations. But in the Malaysian state of Sabah, a top official is fighting to reverse the trend by bringing sustainable forestry to the beleaguered island.
READ MORE

Crucially, the disparate blocks of forest that Mannan and Reynolds are trying to cobble together would form a continuous belt from sea level to over 1,700 meters in elevation. If they succeed — and they estimate at least 1,000 square kilometers of additional forest is needed — it would provide a link between more drought-prone forests in the coastal lowlands and wetter forests at higher elevations. Such a gradient would allow animals to move and species to migrate — a critical buffer against the effects of future climate change and droughts. “Ecologically, this is probably the most important stretch of forest in Borneo,” says Reynolds. “It’s the last link between the lowlands and uplands that hasn’t been completely hunted out.”

Mannan stresses that support from the Royal Society and other high-profile partners is crucial for him. But the situation is changing. The Royal Society has been downsizing its financial investment in Borneo research and will soon hand off its programs there to a consortium of academic, conservation, and training organizations — a key development that should help ensure the survival of the society’s legacy in Borneo.

Clearly, it is a pivotal time for Danum Valley and its surrounding forests. As the roar of encroaching bulldozers draws nearer, one has to applaud those fighting so resolutely to save a piece of Eden.