On Feb. 19, a brief public statement in Delhi broke the news that the Special Envoy of the Prime Minister on Climate Change, the austere veteran bureaucrat, Shyam Saran, was to quit. The announcement came as a surprise: Saran was Delhi’s most senior climate official. He had earlier been entrusted by the prime minister, Manmohan Singh, with shepherding the controversial nuclear deal with the U.S. to a conclusion, then put in charge of India’s climate diplomacy. Only a few days before his resignation, Saran had chaired a meeting of India’s climate negotiators and domestic ministers to map out a post-Copenhagen strategy. What had gone wrong?

Within hours, India’s press was pointing to one man as the key to Saran’s departure: the relatively junior figure of the Minister for Environment and Forests, Jairam Ramesh.

Ramesh, though a minister, does not hold cabinet rank. Nor, until last year, was he a figure of international significance. In India’s complex, status-conscious political world, he ranked below the heavyweight Saran, a veteran foreign service official with a secure base in India’s powerful bureaucracy and the solid backing of India’s climate negotiating team. 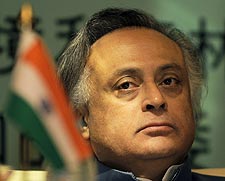 But in the course of the last 12 months, from what might be rated, at best, a medium rung on Delhi’s ladder of power and influence, Jairam Ramesh has vanquished two senior rivals to emerge as the voice of India’s transformed climate policy. India had previously hung back, adamant that its prime responsibility was to give its citizens a better life, climate impacts notwithstanding. Today Delhi accepts that it is in India’s best interests to be constructively engaged in low-carbon policies both at home and internationally. And in the public battles that have been fought over India’s future responsibilities in climate change diplomacy, it is Ramesh who has triumphed.

The signs of friction between the opposing visions of Shyam Saran and Jairam Ramesh had not been hard to find. In the difficult months leading up to December’s climate summit in Copenhagen, the battle at the heart of government over India’s position had spilled over into public view in leaked letters, threats of resignation, and competition for the support of Prime Minister Singh.

India may not have have been part of the problem, Ramesh insists, but it must be part of the solution.

In July 2009, when Prime Minister Singh endorsed the climate statement agreed at the major economies forum in Italy, with its ambition to limit the temperature rise to 2 degrees C, a dissenting Indian negotiator wrote a strong letter of protest. It was, he wrote to the prime minister, “a body blow to everything that we have fought for,” giving voice to the widely shared conviction that agreeing to the overall target opened the door to future emissions constraints for India that would undermine its right to develop.

Ramesh countered with a leaked letter of his own, in which he asked the prime minster for permission to change India’s policy. Shyam Saran let his opposition to Ramesh’s ideas be known, and two senior officials on the negotiating team threatened to boycott Copenhagen unless they received assurances that Ramesh would not be allowed to dilute India’s hard-line position.

In the aftermath of the climate summit, the argument continued: Saran was opposed to accepting the Copenhagen Accord, Ramesh was in favor. Supporters on both sides argued that the policy confusion was sending the wrong signals. The Feb. 19 announcement — and the further speculation that followed, that Saran’s office could be dissolved entirely — has left Ramesh the clear victor.

It was Ramesh’s third public victory in a few short weeks, each time against men who seemed more powerful. The first had come on the morning of Feb. 5, toward the end of the opening ceremony of the 10th Sustainable Development Summit in Delhi, when Jairam Ramesh had gestured to the conference host, Rajendra Pachauri, the beleaguered chairman of the Intergovernmental Panel on Climate Change. When Pachauri obediently crossed the stage to Ramesh’s side, Ramesh gave him a very public hug.

Pachauri, the once-proud Nobel laureate, was open to hugs that week, and to the sometimes lavish tributes that the conference speakers, from the prime minister down, dutifully delivered in support of his chairmanship of the IPCC. He was under attack for a notable howler that had been published in the IPCC’s influential Fourth Assessment in 2007, the contentious claim that the Himalayan glaciers, which are vital to India’s water supply, would disappear by 2035.

The now discredited date originated a decade ago in a telephone interview with the Indian glaciologist Syed Iqbal Hasnain, published in the magazine New Scientist. It was picked up in a later WWF report on the condition of the Himalayan glaciers, and it appears to have been copied straight into the IPCC impacts assessment. In January, two London newspapers had attacked the 2035 date. By February it was a full-blown scandal.

Ramesh is now the undisputed hand at the helm of India’s climate policy.

Its inclusion in what is meant to be the UN’s definitive account of the state of knowledge on climate change dealt a serious blow to the credibility of the IPCC process and to Pachauri’s leadership of it. Climate conspiracy theorists pointed out that Hasnain now works for Pachauri’s influential think tank, TERI, and began to widen their attacks to a more general assault on Pachauri’s credibility and reputation for integrity.

For Ramesh, however, the scandal was a vindication of his own long-running dispute with Pachauri on the soundness of the science that underpinned the glacier assessment. When Ramesh had first disputed the 2035 date last year, Pachauri brusquely dismissed his doubts. And when Ramesh supported a report by a group of Indian glaciologists that argued there was little short-term threat to the glaciers, Pachauri had labeled it “voodoo science.”

So for those who followed the battle for ownership of India’s climate policy, the photograph of Pachauri submitting to Ramesh’s public embrace that led the front page of The Hindu, one of India’s main daily newspapers, on Feb. 6, said a great deal. Ramesh, Pachauri’s most vocal public critic in India, had won an important victory.

In attacking the shaky foundation of the glacier claims last year, Ramesh had also found himself embattled with several international NGOs that feared he was undermining the urgent case for climate action. In Copenhagen, he was challenged by a youth activist and threatened with a “fossil of the day” award, a daily badge of shame awarded by a consortium of NGOs during the conference to those they deemed obstructive to climate action.

His critics were the more dismayed because Ramesh had come to office in 2009 with a mission to renovate India’s climate policy. At the 2007 Sustainable Development Summit in Delhi, he had attacked India’s reluctance to contemplate limiting its future emissions as outdated and unhelpful. “If we have superpower ambitions and superpower visions then we should take on superpower responsibilities,” he told his audience.

Some of his admirers feared that his challenge on the threat to the glaciers signaled a weakening of his commitment to action on climate change. By February this year, though, it was evident that his argument with Pachauri over the glaciers was a defense, rather than a criticism, of the need for scientific rigor.

Now that he is the undisputed hand at the helm of India’s climate policy, Ramesh’s continuing rise has international, as well as national, significance.

Ramesh is an unusual figure in Indian politics. An engineer by training, he is, at 55, an energetic and outspoken politician. Dressed in the traditional clothes that remain de riguer for India’s political class, his long gray hair brushed back, he appears to enjoy the public theater of Indian politics and cultivates a close relationship with his followers in the Indian media. His rivals, however, underestimate him at their peril.

“There are two or three things that make him interesting,” observed one political analyst from a leading Delhi think tank, who asked not to be identified. “He comes from a non-political background and he got into politics on his intellectual merit. Not too many politicians have the courage to take that route. He came in as an intellectual and now he manages elections. He has become an integral part of the Congress Party.”

As an elected politician, Ramesh must avoid charges of giving in to international pressure.

Indeed, Ramesh, who studied at Carnegie-Mellon and MIT in the 1970s, became one of the Congress Party leader Sonia Gandhi’s inner circle. The groundwork for his political career was laid over the 20 years he spent as an advisor on economic policy and finance in various government and private posts. Only two years after his entry into Parliament in 2004, he was appointed Minister of State for Commerce and Industry, then briefly served as Minister of State for Power. He took the Environment and Forests portfolio in May 2009, giving him a voice in domestic climate policy but not, at first, in international negotiations.

In his short stint as environment minister, Ramesh has managed to walk a difficult political tightrope. He has moved India’s climate policy forward against the opposition of much of the civil service and India’s influential civil society, both quick to accuse politicians of pandering to outside pressure and failing to defend India’s interests. In an influential speech to Parliament last year, Ramesh argued that it was in India’s own interest to be proactive on climate measures, regardless of international frameworks, because a failure to do so left India’s future prosperity vulnerable to climate shocks. India, he said, should offer a 20 to 25 percent reduction in emissions intensity by 2020, a proactive policy, he argued, that would allow India to claim leadership internationally. It infuriated the traditional climate negotiators who had spent years avoiding any suggestion of leadership.

Unlike the negotiators, Ramesh is an elected politician who must avoid the charges of giving in to outside pressure. As he joked in the course of last month’s Sustainable Development Summit, for a politician to be seen to agree with the European Union or the U.S. on climate policy is “the kiss of death in India.” Hence his insistence in his public statements that his objective is to protect India’s interests and its right to develop.

A few days after the sustainable development conference closed, Ramesh entered the final stages of his third public battle, this time over whether genetically modified eggplant, popularly known in India as Bt brinjal, should be cultivated as India’s first genetically modified food crop. The Minister of Agriculture, a full cabinet member, had given the go-ahead, despite opposition from several of India’s highly vocal NGOs. Ramesh, technically junior to the agriculture minister, claimed the right of final approval.

A noisy series of public meetings in seven major cities were held. In one of them, in Bangalore, Ramesh added to his reputation for unconstrained behavior by calling a heckler a “mental patient,” before announcing on Feb. 9 that further research was required to determine the impact on human and environmental health. “An independent regulatory body needs to be set up,” he told reporters, “a consensus is needed on the tests required, the duration of those tests, and where they are to be conducted.” Asked about the timing, Ramesh replied, “It’ll take a few years. What’s wrong with waiting?”

Bt brinjal will not be coming to India any time soon, and Jairam Ramesh had notched up another notable victory.