Until the middle of the 20th century, highly productive market gardens known as bostan covered vast swaths of Istanbul, yielding enough vegetables and fruit to feed hundreds of thousands of people. Gardens on the banks of the Bosphorus Strait that divides the city between two continents were known for their sweet-smelling strawberries and tender figs; longtime residents still sing the praises of the buttery lettuce once grown in the Yedikule neighborhood around the old city walls. 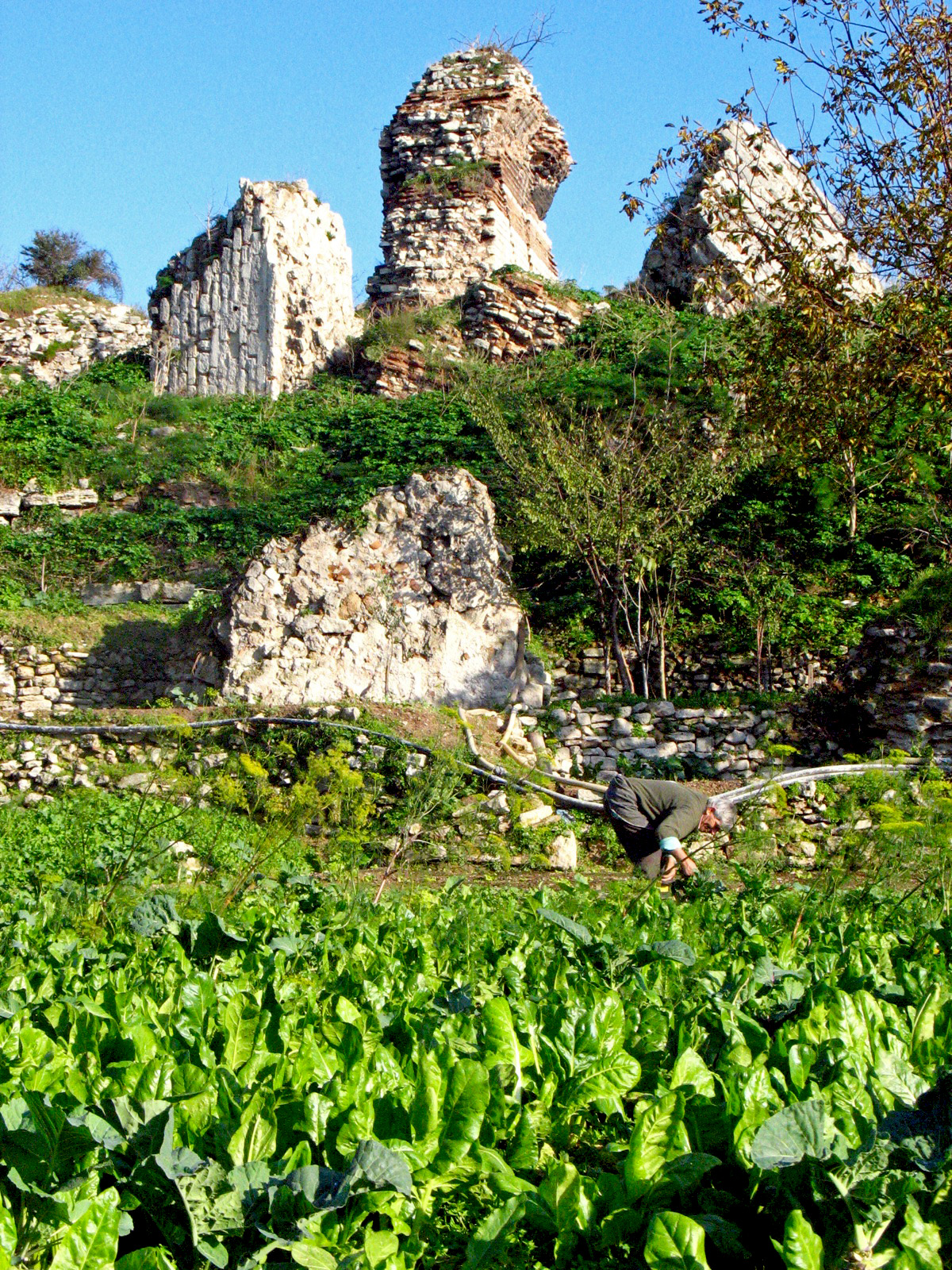 “The bostan in Yedikule are one of the first forerunners to what we today term urban farming,” says Aslihan Demirtas, an Istanbul-based architect who also has a design studio in New York. “It’s become very trendy in places like Brooklyn to grow your own lettuce on a warehouse rooftop, but people have been producing food here within the city for 1,500 years.”

That tradition, however, is perilously close to extinction. Rapid urbanization throughout the city, whose population soared from 1 million in 1950 to more than 15 million today, has seen most of Istanbul’s historic bostan disappear under an ever-sprawling sea of development. The mostly rural immigrants from Turkey’s Black Sea region still eking out a living along the UNESCO-listed walls in Yedikule are among the last of their kind. And early this year, local police entered their vegetable plots, often rented from the city on a month-to-month basis, tearing down the sheds that held seeds and tools, and telling the gardeners to collect their final harvests by March.

“If you throw me out on the street, what am I going to do? I’m 53 years old and I don’t have any other profession,” Ahmet Ozturk said at a press conference held by the gardeners after the January incident. His family has been working the land in Yedikule for three generations.

A month later, though, the head of the Yedikule Market Gardeners’ Association announced that his group had come to an agreement with the municipal government to protect at least some of the bostan.

“We will work together with the municipality to protect and improve our bostan, the source of our livelihoods,” says association president Cihan Kaplan. “We are producing food here, we are growing tomatoes, mint, lettuce, cabbage. Where else in Istanbul is there this kind of opportunity, where our children can see how fruits and vegetables are planted in the ground?”

The agreement, if it holds, has the promise of bringing the treatment of Istanbul’s market gardens more in line with global trends. “People [in other cities] are establishing urban gardens, protecting them with laws, and setting up educational programs to reconnect people with nature because they recognize such gardens helped keep them alive in the past,” says Defne Koryurek, founder of Slow Food Istanbul.

That certainly was the case in Istanbul, where food grown within the city (then known as Constantinople) helped residents survive an eight-year siege at the end of the 14th century.

Outrage over the destruction of two gardens helped spark an interest in urban agriculture.

Today, 800 million people around the globe are engaged in urban agriculture, which can produce up to 15 times more food than a rural plot of the same size, according to the Food and Agriculture Organization (FAO) of the United Nations. In addition, the FAO notes, urban farming “generates employment, recycles urban wastes, creates greenbelts, and strengthens cities’ resilience to climate change.”

Despite the recent agreement between the municipality and the gardeners, Koryurek and others believe more permanent protection is necessary for the remaining Yedikule bostan, which comprise about 50 scattered acres under cultivation along two layers of ancient fortification. Though the city walls and the land around them are included in a UNESCO World Heritage site, Koryurek explains, “the bostan were not addressed specifically as a unique and inseparable portion of the walls. It’s time to do that.”

Activists have reason to be concerned about leaving the fate of the bostan up to city officials, who have previously seen them as a target for development. Two former garden plots in Yedikule still lie under rubble after being bulldozed in the summer of 2013 to make way for a park and recreation-area project that has yet to materialize. Another nearby garden plot was declared part of an urban renewal zone in 2006; it is now gone, replaced by a gated community.

“The area where this housing development was built was first made into a parking lot, and then a football field,” says architect Demirtas. “This is a pattern we see with the development of green spaces in Istanbul — to slowly change the area’s character and make people lose their memory that there was ever soil underfoot.”

Historical documents dating from the 5th-century reign of Byzantine Emperor Theodosius II indicate that there was agricultural land in the vicinity when he ordered the fortified walls of Constantinople built. This is the first known written evidence of a farming tradition that continued largely uninterrupted through the Ottoman Empire and into the modern Turkish Republic.

“The Geoponika, a 10th-century Byzantine agricultural manual, has a list of all the vegetables grown within the urban gardens of Constantinople, and so many are the same as are being grown today: cabbage, beets, carrots, onions, turnips,” says Chantel White, an archaeobotanist at the University of Pennsylvania, who has done research work in the Yedikule bostan. “Even plants that aren’t cultivated in the gardens anymore, like mallow and orach, are growing as weeds there, and they’re still edible.” 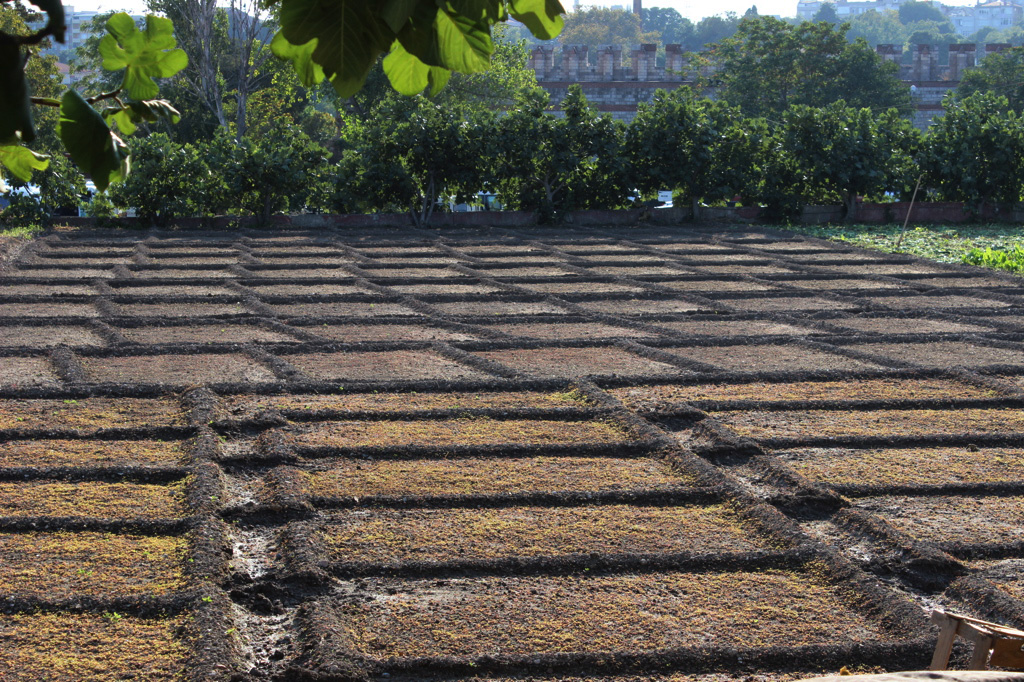 Outrage over the destruction of the two Yedikule plots in 2013 has helped spark a resurgence of interest in urban agriculture in Istanbul. Activists successfully fought last summer to protect the 16th-century Piyalepasa bostan, the last example of what used to be numerous gardens connected to the city’s mosques. And new gardens are popping up on university campuses, on unused plots of land, and on hotel rooftops. A new collective of producers and consumers is connecting people who want to buy local food with fruits, vegetables, and herbs from Yedikule and Piyalepasa. And a new café is sourcing produce from Istanbul’s remaining urban farms to supplement the greens it grows hydroponically on the ground floor of a city-center apartment building.

But as welcome as these initiatives are to Istanbul’s environmentalists and foodies, White says they can’t replace the knowledge held in the Yedikule bostan, such as unique methods to successfully grow multiple harvests of crops year-round. The gardeners in Yedikule grow so many different kinds of vegetables right next to each other that they can’t use a sprinkler system, explains Aleksandar Shopov, a PhD candidate at Harvard University focusing on Ottoman-era agricultural history. Instead, water is pumped up from 17th-century wells and directed into narrow canals that run into the masula, a system of small wood-framed planting beds. Each perfectly level bed can be opened up or closed off individually to ensure it gets just the right amount of irrigation. “The masula separate plants that need a lot of water from those that don’t, and their edges protect the topsoil from the wind and retain moisture, even in the heat of summer, so the system saves water,” Shopov says.

Gardeners in Yedikule as well as Piyalepasa also employ other environmentally friendly practices, including producing their own seeds and using manure for fertilizer, Shopov adds, although he is careful to note that local agricultural practices have been anything but static over the centuries.

Previous generations of gardeners were replaced by immigrants from Bulgaria, Albania, and Macedonia.

“Agriculture in the city during the Byzantine and Ottoman periods was very dynamic,” he says. “There was a change in the kind of things that were being grown, and of course, the rise of new cultivars.”

That fluidity has continued into the modern period. Crops like cauliflower that require a lot of space were replaced as the land available for farming started to shrink. When large populations of Greeks left Istanbul following violence directed at their community in the 1950s, they took their taste for bitter greens with them, and fewer of these plants were subsequently grown in Yedikule. The previous generations of Greek and Armenian gardeners were replaced by immigrants from Bulgaria, Albania, and Macedonia, and the current tenants from Turkey’s Black Sea region have been joined by a handful of Syrian and Afghan refugees now making their home in surrounding neighborhoods.

Demirtas draws optimism from the way the gardens have changed over time, saying it demonstrates the same kind of resilience that urban agriculture itself can provide to a city. “Rather than perish, the gardeners are willing to adapt,” she says. She hopes that recent developments will open up space for more dialogue between city officials, environmentalists, historians, the gardeners, and other local residents. Mindful of the tensions that flared in 2013 with angry neighborhood residents who wanted to see a park built over some of the gardens, Demirtas has drawn up plans for a design that would allow the bostan to continue as working gardens while giving the neighborhood some much-needed access to open space.

Standing in her Istanbul office in front of some of her drawings, she points out raised pathways through the gardens that would allow drainage to continue uninterrupted, as well as seating areas and places to sell produce — all permeable, with no foundations or permanent structures.

Her vision differs significantly from the highly manicured park plan previously proposed for part of Yedikule, which left no place for agriculture. But though the municipality has so far nixed the idea of replanting the gardens bulldozed that summer, Demirtas insists they are ripe for rejuvenation. “I’ve talked to agricultural engineers and the gardeners themselves, and they all say the soil is still healthy underneath the rubble, it’s just sleeping and waiting.”