Here is a good news story from Africa. A story about how conservationists and forest managers are putting local communities at the heart of efforts to protect forests on critical upland watersheds. In Kenya, local famers are replacing state officials and forest wardens in the battle against a corrupt system intent on ransacking natural resources that once reached all the way to the president’s office.

Can local control work where the state failed? Will the country’s critical “water towers” be saved? For a country that depends on them for most of its water, food, and energy supplies, much is riding on the answer. 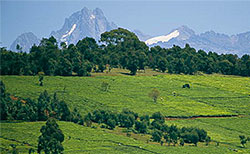 Kenya’s five main water towers — the Aberdare Mountains, the Mau forest complex, Mount Kenya, Mount Elgon, and the Cherangani Hills — cover just 2 percent of the country. But their elevation means that they intercept clouds blowing off the Indian Ocean, capturing most of the country’s rains. These places are the sources of all but one of Kenya’s major rivers. Their forests and soils store and release water that ensures year-round flow of most rivers — supplying more than 75 percent of the country’s renewable surface water, according to the United Nations Environment Programme (UNEP), which is based in the Kenyan capital of Nairobi.

But Kenya is on a hydrological knife-edge. During my visit in January, the agriculture ministry reported that one of its flagship irrigation schemes, the 1,544-square-mile Galana project, could be all but moribund when it opens later this year because of a lack of water. The River Tana, which drains from the Aberdares water tower, was carrying so little water that the project’s canals — which would draw water from the Tana — would be able to irrigate only 2 percent of the fields due to be cultivated as part of the project. Meanwhile, the once-perennial river Ewaso Ngiro, which drains from Mount Kenya and waters the pastures of cattle-herding groups like the Samburu, now regularly runs dry for around 100 days a year.

Protecting the water towers is vital. Without them, Kenya would be little more than a desert.

So protecting the water towers is vital. Without them, Kenya would be little more than desert.

Yet until recently, these forested hillsides were notoriously the places that corrupt senior politicians annexed illegally to provide farmland for their allies, constituents, and tribal members. This was especially true during the long and deeply corrupt presidency of Daniel Arap Moi, from 1978 to 2002. “It was a political game, organized by Moi and his family,” Emilio Mugo, the acting director of the Kenya Forest Service (KFS), told me when we met in his office in Nairobi last month. “It was a nightmare. The forest was being destroyed.” Besides clearing forest for farming, settlers were chopping trees for charcoal production. “In 2000, we counted more than 14,000 charcoal kilns in the forests of the Aberdares,” Mugo said.

The scandal over the felling of forests on the water towers came to a head in 2009, when an official task force reported that a quarter of the forests in the Mau water tower, the country’s largest, had been lost in the previous 15 years. Some 413 square miles had been encroached by farmers and wrecked by illegal loggers. Much of the illegal takeover, it found, had been masterminded by leading politicians, using corruptly obtained title deeds for distribution to their allies and constituents.

An unpublished annex to the task-force report, seen by Yale Environment 360, named some culprits, including a member of the inquiry task force itself, who subsequently resigned and gave up the land.

The Mau investigation found that the spread of agriculture was damaging the forest’s ability to capture and distribute water, especially in the dry season. “The destruction of natural vegetation has resulted in a decrease in the annual water yield due to a decline in stream flow discharge of most rivers from the Mau forest complex,” the report’s technical assessment concluded.

The phrase ‘water towers’ unlocked a recognition about the nation’s precarious ecosystems and water supplies.

Similar ecologically damaging invasions happened during that period at the other water towers, especially the Aberdare mountains. This area is one of the country’s prime vacation destinations for observing elephants and other wildlife and the main source of water and hydroelectricity for nearby Nairobi. The walls of Mugo’s office in Nairobi are covered with maps showing where his agency lost forests. They reveal large areas of the Marmanet and Ol Arabel forests overrun in the northern Aberdare mountains, and similar deforestation of the southwestern Aberdares.

Concern about the towers grew during the presidency of Moi’s successor, Mwai Kibaki, who briefly appointed the forest campaigners and 2004 Nobel peace-prize winner Wangari Maathai as assistant minister in the Ministry for Environment and Natural Resources. Economic studies put the benefit to the national economy of the Aberdares at $600 million and of the Mau complex at $1.2 billion, with the biggest contribution from river flows that supply irrigation, tap water, and hydro-electric power.

Mugo says an important factor in this process was the popularizing of the phrase “water towers.” It unlocked a recognition about the nation’s precarious ecosystems and water supplies, and their link to forests. “The new terminology galvanized public attention,” he says. Calls to revive the towers became a national priority, culminating in the creation in 2012 of the Kenya Water Towers Agency to coordinate government activity.

“We are now looking at the towers as national assets,” says Francis Nkako, the CEO of the new agency. In the past five years, 81 square miles of the Mau forest system have been repossessed from illegal settlers for ecological rehabilitation, according to UNEP.

The KFS, which once saw its main job as exploiting forests, now concentrates on protecting them, says John Wachihi, who holds the new post of the KFS’s head of conservancy in the central highlands. “We need to increase these [water] catchment areas where possible, remove people so the forests can regrow, and increase the water retention capacity of the highlands. That’s where the future lies. Because if you are talking about water, you are talking about trees.”

Communities were once seen as the enemies of conservation. Now they are seen as crucial allies.

How is this being done? The drive against corruption has helped. So has putting fencing around some water towers. But the biggest change is a complete about-turn in the way forest conservation is managed. With millions of people living on the lower slopes of mountains, close to the main “water tower” forests, communities were once seen as the enemies of conservation. Now they are seen as crucial allies.

Control of the forests is being systematically given to democratically elected community forest associations (CFAs) that manage the forests under agreements with the KFS. The change began with the 2005 Forest Act, which encouraged the forest service to initiate the formation of CFAs and to enter into agreements with them. This devolution is now written into the country’s new constitution, which came into force in 2010, and to date, 325 CFAs have been created.

Under the agreements, CFAs are tasked with ensuring sustainable use of the forests, preventing illegal activity in them, managing and raising fees for grazing of livestock and firewood cutting in the forests, and starting new economic activities based on forest resources. No members of the community are allowed to live in the protected forests, but they can use them. The idea is that, with the incentive of control, communities will both value and protect their forests.

CFAs already entirely run some forests — for instance the Nyeri forest, close to Mount Kenya — while others concentrate on specific economic projects like bee-keeping, fish farming, or cutting grass for livestock. At Kimunye village near Mount Kenya, Sarah Karungari showed me beehives set up by the local CFA, of which she was a member, to produce honey from pollen in the nearby forest. 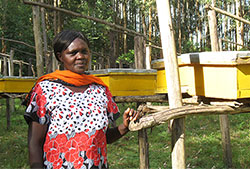 Sarah Karungari with beehives set up by the community forest association in Kimunye village. FRED PEARCE

“Thanks to the CFAs, people are changing their attitude to the forests,” says the KFS’s Wachihi.

“People who used to be poachers and illegal loggers are now defending the forests,” says Simon Gitau, warden of Mount Kenya National Park. He says much of the work of looking out for poachers in the Mount Kenya area is now done by local villagers. “These days, my main focus is not managing the park itself so much as maintaining good relations with the people who live around the park. They are my eyes and ears.”

The combined effects of local control, the removal of illegal settlers, and the drive against corruption have sometimes been dramatic. Forest cover on the Aberdare mountains has increased by a fifth to 289 square miles since 2005, as bush and forest naturally regenerate. The charcoal kilns, says Mugo, are all gone.

Such is the success of CFAs that the community management model is being adopted for Kenya’s abundant and charismatic wildlife outside the river tower areas and in other river catchments.

This rosy picture is not, of course, the whole story. Illegal incursions into the forests continue in places. An aerial survey in July last year spotted a large marijuana plantation on the slopes of Mount Kenya. Where there are no CFAs, problems from poaching and illegal logging are more likely to persist — for instance in the northeastern slopes of the Aberdares, the local forest warden Silas Marewa told me.

ALSO FROM YALE e360People or Parks: The Human Factor in Protecting Wildlife

Recent studies in Asia and Australia found that community-managed areas can sometimes do better than traditional parks at preserving habitat and biodiversity. When it comes to conservation, maybe local people are not the problem, but the solution.READ MORE

Removing illegal settlers has been slow in places, especially where the settlers still have good political connections or where nowhere has been found to move them. And people with genuine links to the water-tower forests have been unfairly caught up in the removals. The most notable victims have been members of the traditionally forest-dwelling Ogiek tribe, who say their legitimate rights have been ignored. The more thoughtful forest wardens that I met agreed that the Ogiek were ideal forest custodians and should be allowed to return to their former forest lands, including the Eburu forest, part of the Mau water tower complex.

Some officials expressed concern to me that CFAs, with monopoly control of local forest resources, may ultimately prove as inimical to good conservation as political elites. So corruption and abuse of the land and its resources may not disappear so easily.

Nonetheless, I met plenty of optimists. They point out that more CFAs keep being formed and that Kenya’s forest cover is now up to 7 percent, from a low point of below 5 percent in the 1990s. Officials are confident they can reach their target of 10 percent cover by 2030. In Africa, where wildlife and forest protection is still often seen as something imposed on communities by foreigners or remote government agencies, all this is a sea change for conservation.