On a recent weekday evening, buses of all kinds were packed even before picking up passengers on a road near the Moolchand metro station in New Delhi. Higher-speed buses did not look noticeably different from regular ones and, after taking on more riders, several types of buses entered a designated mass-transit lane — and then promptly shared it with cars, motorcycles, and a screaming ambulance. 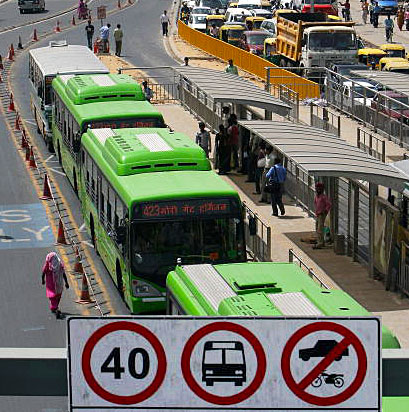 Welcome to New Delhi’s “bus rapid transit,” or BRT, system, an initiative designed to help ease traffic congestion, encourage use of public transportation, and reduce air pollution in this congested capital city of 13.8 million. But Delhi’s six-year-old BRT project has run into numerous snags, including the incursion of cars and other vehicles into the BRT lanes — a development that can defeat the purpose of a system designed to be faster than general traffic. City officials once hoped to create 14 additional BRT corridors, but the system has not expanded beyond its inaugural 3.6-mile stretch.

“It connects Delhi in a good manner,” said Akshya Saxena, a passenger standing near a bus rapid transit platform amid rush-hour traffic. But he added with a sigh, “In India, everything becomes controversial.”

Since 2007, India’s transportation planners have conducted an ambitious experiment by introducing high-speed buses to congested megacities. They have modeled their BRT networks on similar systems, with designated high-speed lanes, that have delivered myriad benefits for urban transit grids around the world, including in Bogotá, Tehran, and several cities in China.

‘It connects Delhi in a good manner, [but] in India everything becomes controversial,’ says one passenger.

International transportation experts have praised a handful of BRT networks in India — especially a system in the northwestern Indian city of Ahmedabad — for reducing congestion and paving the way for long-term CO2 emissions reductions. But high-speed bus systems in Delhi and some other cities have grown slowly for a variety of reasons. One is that urban real estate development in densely populated India is often so fragmented and decentralized that city governments find it difficult to retrofit busy districts with high-speed bus lanes and related infrastructure, according to Indian urban planners.

In addition, the transportation bureaucracy in India’s sprawling democracy — the largest on the planet — is notoriously diffuse and uncoordinated, posing a barrier to effective implementation and maintenance of buses or other methods of mass transit. Car owners have actively resisted BRT because extra bus lanes take away road space from mixed traffic. And across India, the concept of BRT is competing for funding with a host of proposed metro systems. In addition, according to Delhi-based transportation experts, Delhi’s BRT system has suffered from lackluster public-relations work by city agencies and sensationalized coverage about its travails in the Indian news media.

Proponents say that bus rapid transit systems are essential in this rapidly urbanizing country of 1.2 billion people, where a third of the population lives in cities and car ownership has soared in recent decades. Although India’s per-capita vehicle ownership rates are still well below the global average, the country has gone from having fewer than 1 million vehicles on the road in 1961 to roughly 120 million today, according to the Indian Institute for Human Settlements. To avoid worsening gridlock and air pollution, urban planners say India must leapfrog from a largely rural society to a postmodern one with high rates of public-transit usage, cycling, and walking.

Although India’s BRT systems are growing, they have made only a small dent in an increasingly car-centric landscape.

However, there is sharp disagreement among Indian experts over BRT’s potential and the role it should play in Delhi and beyond. Some contend that BRT only works well when roads are wide enough so lanes can be set aside for high-speed buses, and that BRT’s purported environmental benefits are debatable. Others insist that, despite BRT’s global profile, India’s cities will require more comprehensive transport reform over the long term. BRT planners “want a project that is shiny,” Dinesh Mohan, a senior transportation expert at the Indian Institute of Technology Delhi, said in an interview. “I’m not interested in that. I want all bus passengers of Delhi to be more comfortable.”

E. Sreedharan, former managing director of the Delhi Metro Rail Corporation, argues that BRT’s potential effectiveness and environmental benefits have been overstated. “BRT was a total failure in Delhi as well as in Pune,” he said in an email interview. BRT “could be a short-term solution to small cities of less than one million population,” he added, but for bigger ones, “railway-based mass transit is inescapable.”

BRT first gained notice in the 1970s in Brazil and later spread around the world. All but 45 of the more than 160 BRT or “high quality bus corridors” running worldwide were launched after 2002, according to EMBARQ, a Washington-based transportation advocacy group. Many experts view BRT as a logical solution to a range of municipal transportation problems in developed and developing countries, contending that the systems enhance road safety and promote walking, often carry at least as many passengers as regular bus systems, and are far cheaper to build than metros.

But BRT is still a relatively young concept, and BRT projects regularly hit speed bumps in their planning and implementation. Dario Hidalgo, a transport expert with EMBARQ in BogotÃ¡ who has evaluated Delhi’s BRT, says typical obstacles include a difficulty in establishing bus lanes, jurisdictional overlaps between city agencies, competing fleets of privately owned “incumbent” bus services, and a lack of expertise among planning agencies charged with implementing high-speed service and infrastructure.

BRT has succeeded in Ahmedabad partly because early lanes were built in relatively undeveloped districts.

Hidalgo says that even though India’s BRT systems are growing steadily —seven extensive BRT systems now operate nationwide and several others are in the planning stages — they have made only a small dent on India’s increasingly car-centric transportation landscape. “The big challenge for India is if they keep motorizing, they will face enormous difficulties,” he says, including the exacerbation of an already severe air pollution problem.

Indeed, the 2014 Yale Environmental Performance Index ranks the country 177th out 178 countries surveyed for average exposure to fine particulate matter. Delhi’s air is regularly deemed hazardous based on World Health Organization standards. Such pollution in Delhi and many other Indian cities has direct implications for the global environment: According to the United Nations Environment Program (UNEP), India’s transportation-linked greenhouse gas emissions — which in 2007 were 7.5 percent of the country’s total emissions — are projected to rise sharply by 2050.

India’s first BRT system was launched in the western city of Pune in 2007, a year before Delhi’s. Since then, the city of Ahmedabad has emerged as a leader in the country’s BRT movement. After BRT launched there in 2009, the high-speed bus lane network grew from about 3 to 50 miles, according to Shivanand Swamy of the Center for Environmental Planning and Technology in Ahmedabad. His research suggests that the Ahmedabad BRT system carries 8,000 to 12,000 people per hour, and that both buses and individual vehicles have benefitted because the buses carry people who might otherwise commute in mixed traffic. Swamy says the city’s regular-speed buses are now being phased out as the BRT network expands, in part because the city is trying to appeal to middle-class riders who might otherwise be tempted to drive.

“With more cars coming in, our road capacity is going to go down,” he explains. “If you really want to compete with two-wheelers and four-wheelers, you need to give a quality option.”

One expert says the media’s skeptical response to BRT was a “high-decibel attack” that hurt chances of success.

Swamy says other Indian cities — including Surat and Indore — are now following Ahmedabad’s example of developing sophisticated marketing and a “closed” system in which BRT buses are more insulated from general traffic than they are in “open” systems like Delhi’s. Other experts note that BRT has succeeded in Ahmedabad partly because early lanes were built in relatively undeveloped districts, allowing local planners to essentially create the road grid from scratch.

By contrast, BRT launches in Delhi and Pune have struggled because of opposition from car owners and a lack of institutional coordination. Delhi’s

BRT woes intensified in 2012 after an activist filed a lawsuit claiming the system had unfairly taken road space from cars. As the case moved through Delhi’s high court, a judge ordered the BRT lanes opened to general traffic — a move that was later reversed, but not before tarnishing the BRT’s reputation. Dinesh Mohan of the Indian Institute of Technology Delhi, who advises the central government on transportation, says the Indian media’s skeptical response to BRT was a “high-decibel attack” that gravely hurt the system’s chances of success.

Copenhagen’s Ambitious Push To Be Carbon Neutral by 2025

The Danish capital is moving rapidly toward a zero-carbon future, as it erects wind farms, transforms its citywide heating systems, promotes energy efficiency, and lures more people out of their cars and onto public transportation and bikes.READ MORE

BRT buses and subway systems are now being portrayed in Indian newspapers as adversaries fighting for municipal funding. The emerging narrative is that metros imply an elite standard of urban development, says Amit Bhatt, the strategy head for integrated urban transport at EMBARQ India. People in smaller Indian cities are now clamoring for metros, he says, even though BRT is typically far cheaper and more efficient than metros as a capital investment.

Ultimately, transport experts say, BRT is not a silver bullet, but one of many tools — including metros — that planners may use to improve India’s urban transit infrastructure, combat air pollution, and discourage car usage.

The government has funded $4 billion worth of urban transport projects since 2006 — including roughly $840 million for BRT systems — and more funding is in the pipeline, according to EMBARQ. S.K. Lohia, the former head of India’s urban transport department, points out that when the country’s transport reforms began eight years ago, only 20 of its cities had municipal bus service. The reforms have so far been impressive, he says, “but we have to create conditions so that BRT comes as a natural thing, rather than something that is imposed.”

Correction: May 9, 2014: An earlier version of this article incorrectly stated the number of passengers the Ahmedabad BRT system carries per hour at peak times. The correct figure is 8,000 to 12,000 passengers.