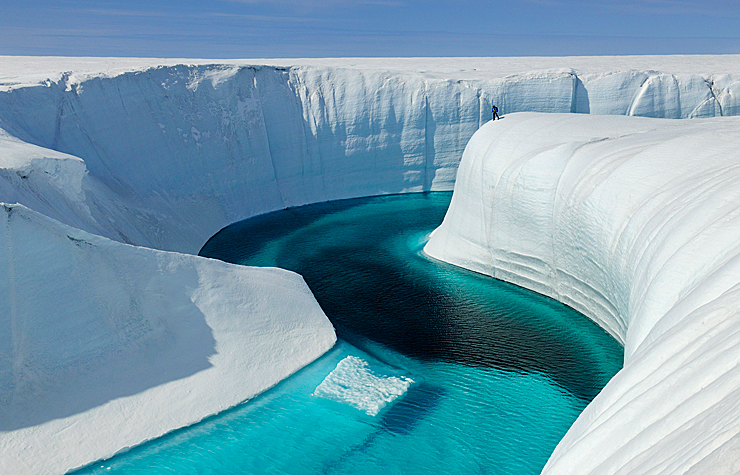 A VANISHING GLACIER: A 150-foot-deep meltwater channel carves its way through the Greenland Ice Sheet, a vivid sign of the glacial melting affecting the vast Arctic island. JAMES BALOG

For James Balog, it all began with a 2005 National Geographic assignment to photograph the world’s rapidly retreating glaciers. That story brought home to him the severity of glacial retreat worldwide and instilled in him a desire to “preserve the visual memory” of a world of ice fading from view.

The result was the Extreme Ice Survey, a project launched in 2007 that has involved the deployment of time-lapse cameras on four continents to record, every half hour during daylight, the shrinking of the world’s glaciers. The ongoing survey, done in collaboration with leading glaciologists, led to Balog’s recently published book, Ice: Portraits of Vanishing Glaciers, from which the photographs in the e360 gallery were selected. Balog’s all-consuming pursuit is also the subject of a documentary film, Chasing Ice, which is being premiered next week.

In an interview with Yale Environment 360 senior editor Fen Montaigne, Balog discusses what has driven him to devote so much of his life to this daunting endeavor. “We’re telling a story about what’s happening right here, right now, as a consequence of human action,” he says. “I think it’s vital to keep telling that story.”

Yale Environment 360: What prompted you to step out of a typical photojournalist’s role of going from assignment to assignment and say, “Well, wait a second. This subject is worth more than just one magazine story.”

James Balog: I’ve been diving this deeply into subjects since the late 80s, so I was really well primed for it. In a typical journalistic assignment, you show up once, you do your single-frame shot, and you go away from it. There is no engagement with the landscape over time. So as much as I could try and look at glacial processes in a single visit to a single area, I was still frustrated by not being able to see it enough. That’s really what gave birth to the time-lapse cam. 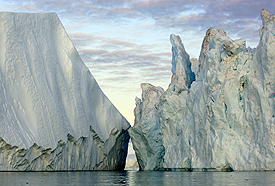 Icebergs in Greenland’s Ilulissat Isfjord. JAMES BALOG
So I said to John Francis of National Geographic’s Committee for Research and Exploration, “Why don’t we think about putting some time-lapse cameras out?” He said, “Well how many would you do?” And I said, “Well I think maybe two or three.” He said, “That’s a wonderful idea. We’ll fund that.” And then four or five days later I said, “Well, as long as I’m going to all these places, and they would all benefit from a time-lapse cam, we might as well just build 25. How hard can that be?” And that became the Extreme Ice Survey and it was much more complicated — an order of magnitude more complicated — than I had ever anticipated…

I had no idea how long a period of time it was going to take. When we started this project, I thought it was going to go on for three years because that was all I could get my head around in terms of life experience and the funding pressures. And by the time we were about two years into it, we started to realize, “Well, we can’t just do it for three years.” And by the time we did it for three years, we thought, “Oh, we can’t just do it for four years.” And now as we sit here in 2012, we’ve all come to the sort of overwhelming conclusion that we can never stop. This has to now go on indefinitely because the power of the record is so enormous, but also because we’re preserving memory. We’re preserving the visual memory of the landscapes that literally are disappearing and will never be seen again in the history of civilization in some cases. At the same time, we’re telling a story about what’s happening right here, right now, as a consequence of human action. I think that it’s vital to keep telling that story.

e360: Can you give us a sense of the scope of the project over the last five years — logistics, expense?

Balog: That first deployment was twenty-five cameras and it took the better part of five months to build all those cameras. Then we still had to revise them. We had to make major changes to some of the systems for the next year or so until we really had them working completely properly.

The cameras are housed in a little waterproof box, a Pelican case. And we cut windows in those housings and did all sorts of custom plastic windows and sun visors. The cameras are powered by solar panels. And then there’s a custom-made computer timer that tells the camera when to fire. The cameras then need to be set up on these big aluminum posts that are bolted into bedrock, tied down with stainless steel aircraft cable, and made to be as permanent and stable as we possibly can make them. They have to withstand 150-mile-an-hour winds. They have to be able to function in weeks of cold down to minus 20, minus 30. And they need to be getting frozen at temperatures that are below minus 40 and still return to life and function after that kind of abuse. There’s deep snow. There’s lashing gales.

e360: How much have you spent over the past six years?

Balog: We were up right around $3 million two years ago and so we’re solidly pushing toward the $4 million mark right now. And lest anybody be deluded about what’s happening here, every single dollar has been an ordeal to get, to keep this thing alive. There is no wealthy patron who’s looking over all of this. We’ve had a series of different grants from NASA, from the National Science Foundation, from National Geographic, and from a couple of fairly large public foundations. But the vast majority of it has been fed by private donors who are passionately committed to the idea that this is an important story that has to go on. 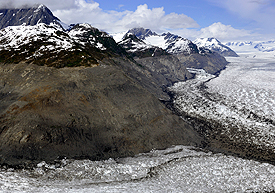 Alaska’s Columbia Glacier, which is retreating rapidly. JAMES BALOG
Far and away the greatest stress on this project has been the funding. Being out in the field and risking your life and rapelling down in those crevasses and getting beaten up by storms and tearing up your knee cartilage — none of that is nearly as stressful as this financial stuff. There have been periods of time where I just burned out and I thought, “I can’t stand to write another proposal or make another phone call. I have to get outdoors and do something that feels more concrete to me.” At least at the end of a day of being outdoors, I know I did something, whereas if you keep writing proposals you feel like you’re treading water in the dark.

e360: From the point of view of a photographer, clearly you show the beauty of this ice. But you’re also trying to convey how fragile it is and how quickly it’s vanishing in many areas. As you were shooting and selecting photos, what balance were you trying to strike of art versus the message?

Balog: Aside from the time-lapse photos, when I actually have a camera in my hands and I’m out there shooting and engaging with the landscape I don’t think about the message at all. All I think about is what grabs my eyes and what grabs my heart and what makes me stop and fall in love. That falling in love is key to this kind of work. You have to have something that grips you in a way that makes you go, “Oh, God, look at that!” The camera is the expression of that pause in time that’s like, “Oh, I just fell in love with this beautiful place and I want to preserve that and I want to show that to others.” It’s about the art and architecture of ice, and it’s a record of our engagement with these incredibly spectacular forms and landscapes.

e360: Talk a little bit about the collaboration between you and the scientists involved in the project?

Balog: Well, I’m continually embarrassed that I’m the lead voice and point person for all of this, because in fact this has been very much a group process. The intellectual base that the project is built on spans the entire world and thousands of different researchers who have been probing into the science for generations. I’m out there in the vanguard of all this, communicating all this for the moment. I consulted with the scientific specialists in these different regions to figure out where I should go, what I should look at, what we should do. We have some terrific collaborators — in some cases we now have cameras out on field sites that I haven’t even been to, but we’ve supplied cameras in return for the pictures that are being generated by some of these research projects.

e360: I’m sure sometimes you think, “What is it going to take to wake up the general public?”

Balog: Sometimes you feel like, “I don’t know if any of this matters. I’m killing myself to tell a story that, maybe, I hope it’s going to [help] change the course of civilization, but maybe it won’t. So damn it, why don’t I just sit on a beach and go surfing and have fun?” Well, the answer is that when I’m an old man and I really can’t do anything anymore, I want to tell my daughters that I was awake and alive and aware and I had the tools and I had the life experience and I did everything I could to tell this story, because it is real. It is happening and this is not an illusion. We really are in the midst of monumental geologic change. And the world doesn’t get better if all of us just shut up and go away. These stories have to be told.

Photographer James Balog’s work, which focuses on the relationship between humans and nature, has been featured in National Geographic, The New Yorker, Vanity Fair, and other leading magazines. He is the author of seven books, resulting from multi-year projects on endangered wildlife, the relationship between humans and chimpanzees, and portraits of the United States’ largest trees. His latest book, Ice: Portraits of Vanishing Glaciers, is the product of the Extreme Ice Survey, a project he launched in 2007 to document the disappearance of glaciers worldwide in the face of human-caused climate change. Balog is a founding fellow of the International League of Conservation Photographers.