For years now, Perry Gottesfeld has been globetrotting in search of lead paints. These have been banned for decades from U.S. and European buildings because they poison children as they deteriorate. But as Gottesfeld, executive director of the U.S.-based NGO Occupational Knowledge International, and others have been showing, there’s still plenty of lead paint for sale in developing nations.

Two years ago Gottesfeld was in Cameroon, where he and collaborators at a local NGO now report they had found high levels of lead in numerous enamel house paints for sale throughout the African nation — a dozen with so much lead in them they exceeded the U.S. standard by 300 times or more. Only a few listed any ingredients on the label, and none had any warning language to alert consumers of the danger. The lead paints they found came from 12 manufacturers in Cameroon, Ivory Coast, Greece, and the United Arab Emirates. 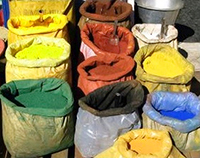 Gottesfeld and two Cameroonian colleagues visited the largest manufacturers in Cameroon, trying to convince them to reformulate their paints to eliminate the lead. They headed to the country’s biggest paint manufacturer, Seigneurie, which made one paint that they say topped their charts with a lead content of half its weight, 5,500 times the U.S. standard. Arriving at the factory, Gottesfeld says he was shocked to see a big sign on the door bearing the corporate logo of PPG, the world’s second-largest paint company with headquarters in Pittsburgh. This was no backwater operation. Seigneurie, it turned out, was PPG’s French subsidiary, with outposts in a dozen developing nations.

In the U.S., which has a contentious history of lawsuits against residential-paint manufacturers over their past use of lead, the dangers of lead paint are no secret. “If anybody should be aware of it, it would be a U.S. company, given the liabilities that they incur at home,” says Gottesfeld. “To comply with a law at home and ignore it internationally is a clear case of double standards.”

Gottesfeld and his colleagues this month published a study of Cameroonian paints in the online version of the Journal of Occupational and Environmental Hygiene. The study showed that of 61 mainly enamel paints purchased at Cameroonian retail stores, 64 percent had lead concentrations well above the U.S. standard for residential paints of 90 parts per million (ppm). Nine out of 22 Seigneurie paints tested had significant lead concentrations.

The study raised the specter of lead paint being the latest in a series of products that have been banned in the U.S. and Europe but have continued to be sold in developing countries by U.S. or European companies. In recent decades, those products have included toxic pesticides, unsafe pharmaceuticals, and goods containing asbestos.

Gottesfeld says that after some discussion, PPG told him in early 2012 that it had stopped using lead in its Cameroonian decorative paints. But when he alerted the company in December that his partners were about to begin testing in Ivory Coast, he says, it seemed like they’d have to start the negotiations over on a country-by-country basis. Then, late last month, says Gottesfeld, PPG emailed him that it would stop making lead paint for consumer use worldwide. In recent testing, Seigneurie decorative paints in Ivory Coast came back virtually lead free, according to the Ivorian NGO that organized the testing.

Jeremy Neuhart, a PPG spokesperson, told Yale Environment 360 via email that the company has not confirmed the findings in Gottesfeld’s study, but that “PPG’s architectural paint and decorative coatings marketed to consumers around the world meet” the U.S. standard. He added that Seigneurie consumer products in Cameroon include labels with that information, and that while Cameroon does not regulate lead in paints, PPG representatives have met with government officials to offer support for establishing an industry standard.

Gottesfeld says PPG’s recent actions show good progress. But he notes that the company’s labeling remains insufficient to let consumers in developing nations readily tell the new lead-free cans from old ones still on the shelf.

Lead is added to paint as a pigment or a drying agent. As the paint ages, lead in chips and dust contaminates living spaces and is easily ingested by small children. Even low levels of exposure can torpedo kids’ IQ, motor skills, and other important neurological functions, and have been linked to poor academic performance, behavioral problems, and criminal activity. European nations began banning leaded indoor paint early in the 20th century, and the U.S. followed suit in 1978 after decades of opposition from the paint industry. However, lead remains legal in the U.S. in paints for automotive, industrial, and various other applications.

Yet lead paint continues to haunt American children, despite huge cleanup efforts and public-education campaigns. Of the nation’s nearly 100 million housing units, a quarter have significant lead-paint hazards, according to a 2002 study, the latest data available. About half a million children under age five have elevated blood lead levels, according to the U.S. Centers for Disease Control and Prevention (CDC), and scientists say lead paint is the primary cause.

With all the attention the issue has received in the U.S., experts say they assumed the paint industry had simply abandoned lead globally. But over the last decade reports that lead-based paints were alive and well abroad began trickling in. In 2007, news that millions of Chinese toys coated in lead paint were being illegally imported to the U.S. and EU highlighted the issue — a problem that persists.

Those reports prompted Gottesfeld and others to begin documenting just how widespread lead-based decorative paints are in the developing world. For instance, a 2009 study led by Scott Clark of the University of Cincinnati looked at household paints for sale in 12 countries and found that the average concentration of lead ranged from nearly 7,000 ppm in Singapore to nearly 32,000 ppm in Ecuador — 355 times the U.S. standard.

There is other evidence of top multinational corporations selling lead-based paints abroad.

In all, Gottesfeld says paints in nearly 40 developing nations have been checked, with similar results: water-based latex paints are generally safe, but oil-based enamel paints often contain high levels of lead. And there’s rarely any labeling to help guide shoppers in those nations, even though there are usually plenty of lead-free alternatives. “They’re available on the same shelf at same price, but there’s no way for the consumer to necessarily know,” Gottesfeld says. “And that’s a big problem.”

Rising incomes in poor countries are supporting a booming paint market, yet most nations have no laws limiting lead in paint and the ones that do rarely enforce them, experts say. Moreover, poor nutrition increases kids’ absorption of lead, and many places lack infrastructure to document poisoning. Cameroon, for instance, has no labs capable of testing lead in blood and medical professionals are not trained to identify lead-poisoning symptoms, according to Samuel Tetsopgang of the Cameroonian NGO Research and Education Centre for Development, a coauthor on the Cameroon paint study.

Mary Jean Brown, chief of the CDC’s lead poisoning prevention branch, says it’s hard to watch other countries slap new lead paint on homes and schools after the decades of work that have gone into cleaning up lead paint in the U.S. — especially when it is entirely avoidable. “For me this is kind of crazymaking,” she says. “It’s like watching 13-year-olds start to smoke.”

Much of the lead-based paint that Gottesfeld, Clark, and others are finding is made by hundreds of small and mid-size companies you’ve never heard of that sell to national and regional markets. Nevertheless, in addition to the case in Cameroon involving the PPG subsidiary, there is some evidence that other top multinational corporations have been selling lead-based architectural paint abroad. A 2009 report by Toxics Link, an Indian NGO, in conjunction with the International POPs Elimination Network (IPEN), an environmental NGO coalition, surveyed paints in 10 countries, and found high levels of lead in Seigneurie paint in Senegal and in Rust-Oleum paint in Thailand, among other examples. A Rust-Oleum official told Yale Environment 360 that the Illinois-based company does not use lead in its paints but that its Thai distributor “has manufactured coatings based on obsolete Rust-Oleum industrial product formulas.”

A Brazilian law restricting the amount of lead in architectural paints took effect in 2009.

Global efforts to rid house paints of lead are gaining ground. In 2011 the World Health Organization and the United Nations Environment Programme established the Global Alliance to Eliminate Lead Paint. Gottesfeld, Clark, Brown, and Weinberg are all involved. So is the International Paint and Printing Ink Council, a leading industry group.

Last summer, Weinberg and Clark authored a report arguing that lead can and should be phased out of decorative paints worldwide by 2020. Their efforts are paying off in places like Cameroon, India, and Malaysia, where some large paint companies stopped using lead voluntarily, including PPG, they say. A Brazilian law restricting the amount of lead in architectural paints took effect in 2009, Sri Lanka followed suit this year, and Cameroon, Thailand, and the Philippines appear to be moving in that direction, according to the report.

“It’s not rocket science,” Weinberg says. “With a modest amount of money this problem could be solved very easily.” He adds that with paint sales just now expanding rapidly in developing nations, there’s an opportunity to avoid the devastating legacy of lead paints that still shadows American children. “There’s still time to minimize the damage,” he says.