Among the spineless creatures of the world, the Nomura’s jellyfish is a monster to be reckoned with. It’s the size of a refrigerator — imagine a Frigidaire Gallery Premiere rather than a hotel minibar — and can exceed 450 pounds. For decades the hulking medusa was rarely encountered in its stomping grounds, the Sea of Japan. Only three times during the entire 20th century did numbers of the Nomura’s swell to such gigantic proportions that they seriously clogged fishing nets.

Then something changed. Since 2002, the population has exploded — in jelly parlance, bloomed — six times. In 2005, a particularly bad year, the Sea of Japan brimmed with as many as 20 billion of the bobbing bags of blubber, bludgeoning fisheries with 30 billion yen in losses.

Why has the Nomura’s jellyfish become a recurring nightmare? The answer could portend trouble for the world’s oceans. In recent years, populations of several jellyfish species have made inroads at the expense of their main competitor — fish — in a number of regions, including the Yellow Sea, the Gulf of Mexico, and the Black Sea. Overfishing and deteriorating coastal water quality are chief suspects in the rise of jellies. Global warming may be adding fuel to the fire by making more food available to jellyfish and opening up new habitat. Now, researchers fear, conditions are becoming so bad that some ecosystems could be approaching a tipping point in which jellyfish supplant fish. 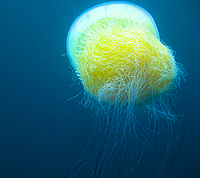 Wikimedia Commons
When an ecosystem is dominated by jellyfish, such as this Nomura’s jellyfish, “fish will mostly disappear,” one ecologist says.

Essential to thwarting any potential jellyfish takeover is a better understanding of the complicated dynamics between fish and jellyfish. Jellyfish — free-swimming gelatinous animals — are a normal element of marine ecosystems. Fish and jellyfish both compete for plankton. The predators keep each other in check: 124 kinds of fish species and 34 other species, including leatherback turtles, are known to dine on jellyfish, while jellies prey on fish eggs and, occasionally, on fish themselves. Juvenile fish of some species take refuge amid tentacles and eat jellyfish parasites. Fish and jellyfish “interact in complex ways,” says Kylie Pitt, an ecologist at Griffith University in Australia.

Overfishing can throw this complex relationship out of kilter. By removing a curb on jellyfish population growth, overfishing “opens up ecological space for jellyfish,” says Anthony Richardson, an ecologist at CSIRO Marine and Atmospheric Research in Cleveland, Australia. And as jellyfish flourish, he says, their predation on fish eggs takes a heavier and heavier toll on battered fish stocks.

“When an ecosystem is dominated by jellyfish, fish will mostly disappear,” says ecologist Sun Song, director of the Institute of Oceanology in Qingdao, China. “Once that happens,” he contends, “there is almost no method to deal with it.” Just think of attempting to purge the Sea of Japan of billions of Nomura’s jellyfish, many of them hovering meters below the surface and therefore invisible to satellites or the naked eye. Total jelly domination would be like turning back the clock to the Precambrian world, more than 550 million years ago, when the ancestors of jellyfish ruled the seas.

Sun and others are racing to get a handle on the likelihood of such a marine meltdown coming true. Like their foe, the subject is slippery. It’s an enigma, for starters, why particular jellyfish run rampant. The troublemakers “are only a small fraction of the several thousand species of jellyfish out there,” says Richardson. These uber-jellies reproduce like mad, grow fast, eat most anything, and can withstand poor water quality. They are tough, Richardson says — “like cockroaches.”

No one can say for sure whether severe jellyfish blooms are a passing regional phenomenon or a global scourge.

The big question is whether these cockroaches of the sea are poised to hijack marine ecosystems. There’s anecdotal evidence that jellyfish blooms are becoming more frequent. But there are also cases in which jellyfish gained the upper hand on an ecosystem, only to suddenly relinquish it. For instance, biomass of Chrysaora jellyfish in the east Bering Sea rose sharply during the 1990s and peaked in 2000. Chrysaora then crashed and stabilized after 2001, apparently due to a combination of warmer sea temperatures and a rebound in numbers of walleye pollock, a competitor for zooplankton.

The jury is out on whether other jelly-blighted waters can regain ecological balance as quickly as the Bering Sea did. For that reason, says Pitt, no one can say for sure whether severe jellyfish blooms are a passing regional phenomenon or a global scourge requiring urgent measures to combat their spread.

Pitt is one of a small band of jellyfish researchers hoping to settle that question. With support from the National Center for Ecological Analysis and Synthesis in Santa Barbara, Calif., she and her colleagues on the center’s Jellyfish Working Group are gathering up datasets from around the world on jellyfish blooms. They expect to have a global picture — and be able to take the measure of their foe — in about a year, Pitt says. 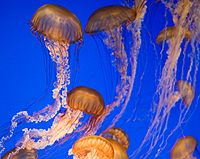 Image Source
Jellyfish blooms can be caused by eutrophication, which can create dead zones around mouths of rivers.

people die each year from jellyfish stings, far more than from encounters with other marine creatures, including sharks. A box jellyfish, the Chironex sea wasp, may be the most lethal animal on the planet: Its toxin can kill a person in three minutes. Global warming may allow deadly jellyfish, now mostly found in tropical and subtropical waters, to conquer new turf in temperate waters as sea surface temperatures rise, warns Richardson. “It’s very likely that venomous jellyfish will move toward the poles,” he says.

While that could be a big blow for tourism, far more worrisome to many researchers is the threat that jellies pose to fish stocks. The most important helping hand for jellyfish may be overfishing. In one well-documented episode, the devastation of sardine stocks appear to have cleared the way for the rise of Chrysaora off Namibia, in waters known as the northern Benguela. Recent research cruises there have hauled in about four times as much jelly biomass as fish biomass.

Another ecosystem tweak that benefits jellyfish is eutrophication. A flood of nutrients from agricultural runoff and sewage spurs phytoplankton growth in coastal waters, providing a feeding bonanza for jellyfish. Eutrophication, usually around the mouths of major rivers, can also create low-oxygen dead zones that jellyfish generally tolerate better than fish.

Global warming may also abet regime change. Warmer ocean temperatures are correlated with jellyfish blooms. A possible explanation, says Richardson, is that warming leads to nutrient-poor surface waters. Such conditions favor flagellates, a kind of zooplankton, over diatoms, a kind of phytoplankton. Flagellate-dominated food webs may be more favorable to jellyfish, he says.

The waters off North Asia may be acutely vulnerable to jellyfish invasion.

For reasons yet to be fully fathomed, the waters off North Asia may be acutely vulnerable to a jellyfish invasion. Since 2000 or so, the Nomura’s jellyfish and two other species — Aurelia aurita and Cyanea nozakii — have been plaguing the Yellow Sea. In the past 5 years, anchovy catches there have decreased 20-fold, says Sun. Perhaps as a result, just like off Namibia, jellyfish are seizing the day. During a research cruise in the Yellow Sea in the summer of 2009, jellyfish amounted to 95 percent of the biomass netted by the scientists.

Alarmed by this ascendancy of jellyfish, Sun is leading a five-year initiative to unravel why jellyfish have become a perennial pest. Among other things, his team will hunt for the elusive cradle of jellyfish in the Yellow Sea. Species of Cnidaria, the phylum with the vast majority of jellyfish, can spend years on the sea bottom as polyps. These reproduce asexually, popping off medusae — the familiar bell-shaped form of cnidarian jellies — that drift up toward the surface. Scientists speculate that polyps may be gaining a stronger foothold in North Asia at the expense of mollusks and other bottom-dwelling creatures. The Chinese group will search for polyps in the Yellow Sea and East China Sea.

One possibility in these seas is that coastal and offshore construction and engineering works are creating new habitat for polyps. Structures as diverse as drilling platforms, embankments, and aquaculture frames introduce smooth surfaces made of plastic and other materials into the marine environment. In the past two decades, as China’s economy boomed, such structures have proliferated, says Yu Zhigang, a marine chemist at Ocean University of China in Qingdao. The Chinese initiative will test the hypothesis that artificial landscapes are cradles for jellyfish polyps.

The bottom line is that multiple factors may favor jellyfish over fish, says Shin-ichi Uye, an ecologist at Hiroshima University who has charted the rapid rise of the Nomura’s jellyfish in the Sea of Japan. The recipe for what makes jellyfish run amuck likely varies by region, and for that reason may take time to decipher. But the future of the world’s fisheries may well depend on it.